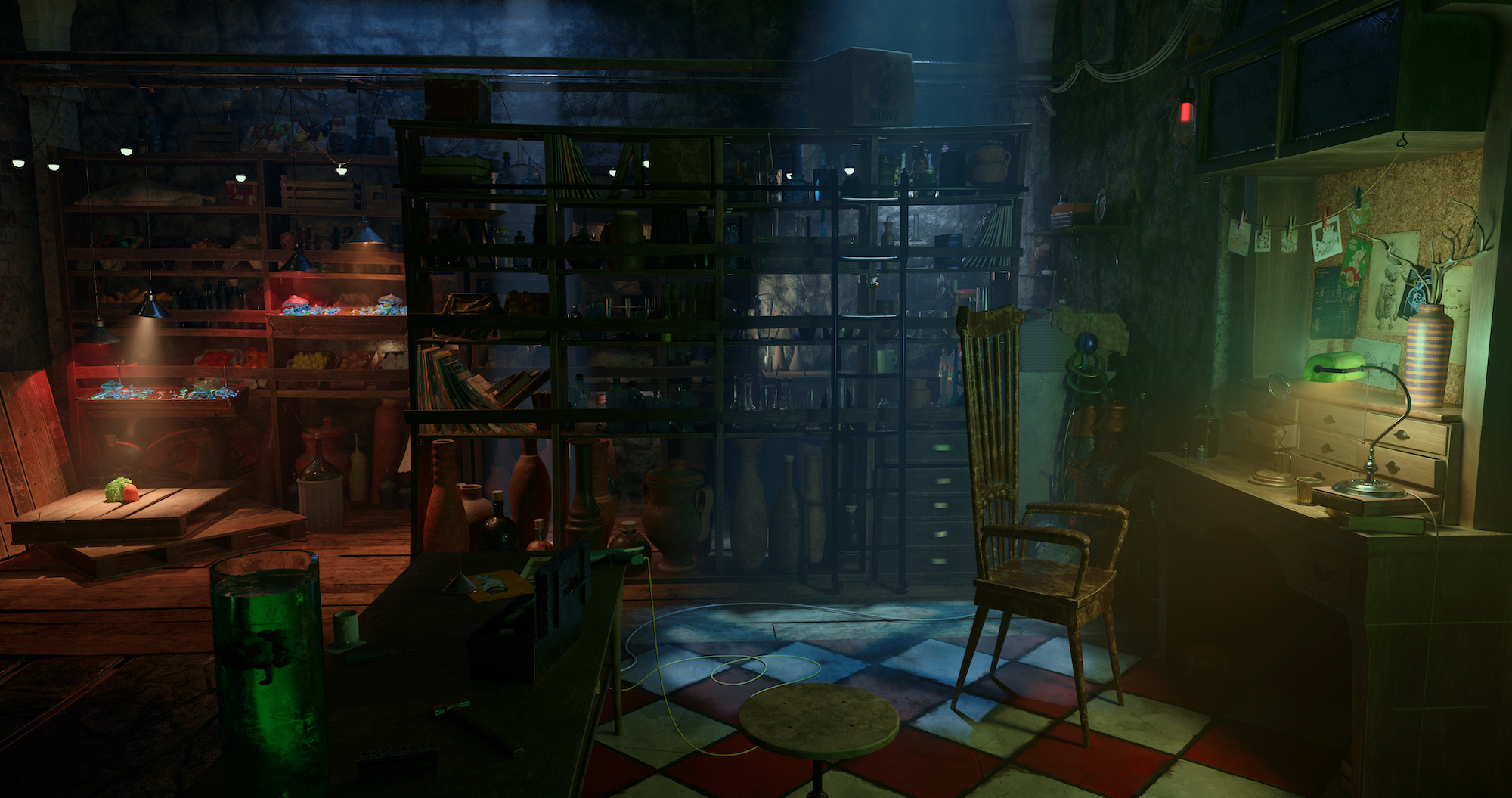 Inspired by the weird and wonderful worlds of Looney Tunes, Dexter’s Laboratory and Rango, Guilherme Afonso and Miguel Madaíl de Freitas’ Don’t Feed These Animals is a fun-filled animated adventure where every frame is permeated with imaginative detail and exciting trinkets expanding the film’s wacky characters and the adventures that unfold. DN spoke to its creators about developing said creatures, the process of directing Beardyman, and about packing a film with pop culture references.

Where did the idea for Don’t Feed These Animals begin?

It all started at Nebula’s 2014 Christmas party when José Alves da Silva offered Guilherme an awesome drawing of a lobotomised rabbit. Guilherme immediately knew that this little guy had to be the main character of a short. We worked on his personality and details and Lob0 (Lobotomised Oryctolagus Beast number 0.) was born. José is an amazing artist and all his drawings with the Bunny had some kind of little narrative which made our minds wonder and imagine a world around it.

Of course, the animal experiments theme is present all along the project, but the film is not only about that. We wanted to make a parallelism with human emotions but using animals and food. The main focus would be the primal and basic human instincts/emotions such as hunger, desire, fear and survival. These also apply to animals. In the end, we are all emotional animals who need to be fed. The use of the word ‘these’ in the main title instead of the traditional ‘the’ is meant to translate the animal behaviour as a concept, and not only to literal animals. All of this wrapped up nicely in a fun and emotional ride.

I love the mixture of light, colourful characters in this dark, dirty environment, what was your visual inspiration for the film?

That question really sums up our main core ideas for the visuals. We were looking for contrasts with colourful and bright characters in a dark mood so that at the same time, we could transmit a mysterious and sinister vibe that an old and dirty mad scientist laboratory is known for, whilst having lashes of colour in the 2D animations on top of the 3D. The look of a horror film but the feel of a joyful animation.

The light really plays an important role in our film, intensifying the drama, going from full dark silhouettes on the shadows to the volume lights meant for the spectator’s eye to follow in different scenes.

So, for the visual inspirations we searched for the kind of mood and feeling normally found in film noir and suspense/horror films and, of course, a little bit of Frankenstein. On the opposite spectrum, the colourful and fun setups from traditional animations like Looney Tunes from Warner Bros., Cartoon Network’s Dexter’s Laboratory and Pinky and the Brain, Zootopia on the 3D approach and lastly, Rango on the stylised and harsh characters.

We were looking for contrasts with colourful and bright characters in a dark mood, the look of a horror but the feel of a joyful animation.

The film is packed full of so many fun characters, how did you decide which animals and vegetables to fill this world with?

We started with the lobotomised rabbit from José’s sketches but right from the beginning, he started introducing a carrot, which sometimes was alive and sometimes was a regular carrot. We picked up from there and decided that she would become alive in the film. We turned her into a female and baby carrot. Of course, carrots are the rabbit’s biggest desire, so that connection was easy to establish.

From there we had the two main characters, we just needed to find a vile and powerful antagonist that would fit perfectly in this crazy laboratory. At that time we had the idea of having the crying gas as a weapon, but that turned out too complicated for the production and we kept only with the green gas. So, with the Onion we had the trio complete.

The fly, baptised as ‘Marty the Fly’ another Easter egg to Michael J. Fox’s character ‘Marty Mcﬂy’ in Back to the Future, would appear later in the script process, when we felt the need of having something to guide the spectator and introducing as much as possible of the back story. The laboratory is filled with details that tell a bit more about the origins of the characters as well as the scientist’s past, such as plans to take over the world with lobotomised bunnies and plans to create the actual rabbit.

The fly itself is an experiment, where the scientist made a kind of steampunk/android fly that had to pedal like on a bicycle in order to flap her wings, which turns out to be very tiring and not energy efficient. The fish is also the result of a crazy experiment where the scientist enlarged a small common goldfish with the laser machine and turned it into a mutant big fish but also he fills the room with his bioluminescent light.

We also created a brand that most of the objects in the laboratory are from in a homage to the famous ‘ACME Corporation’ from Looney Tunes. It’s called ‘Bunz’ and it goes from the can of ketchup to the aquarium’s fishyvision model. The film is filled with these Easter eggs. 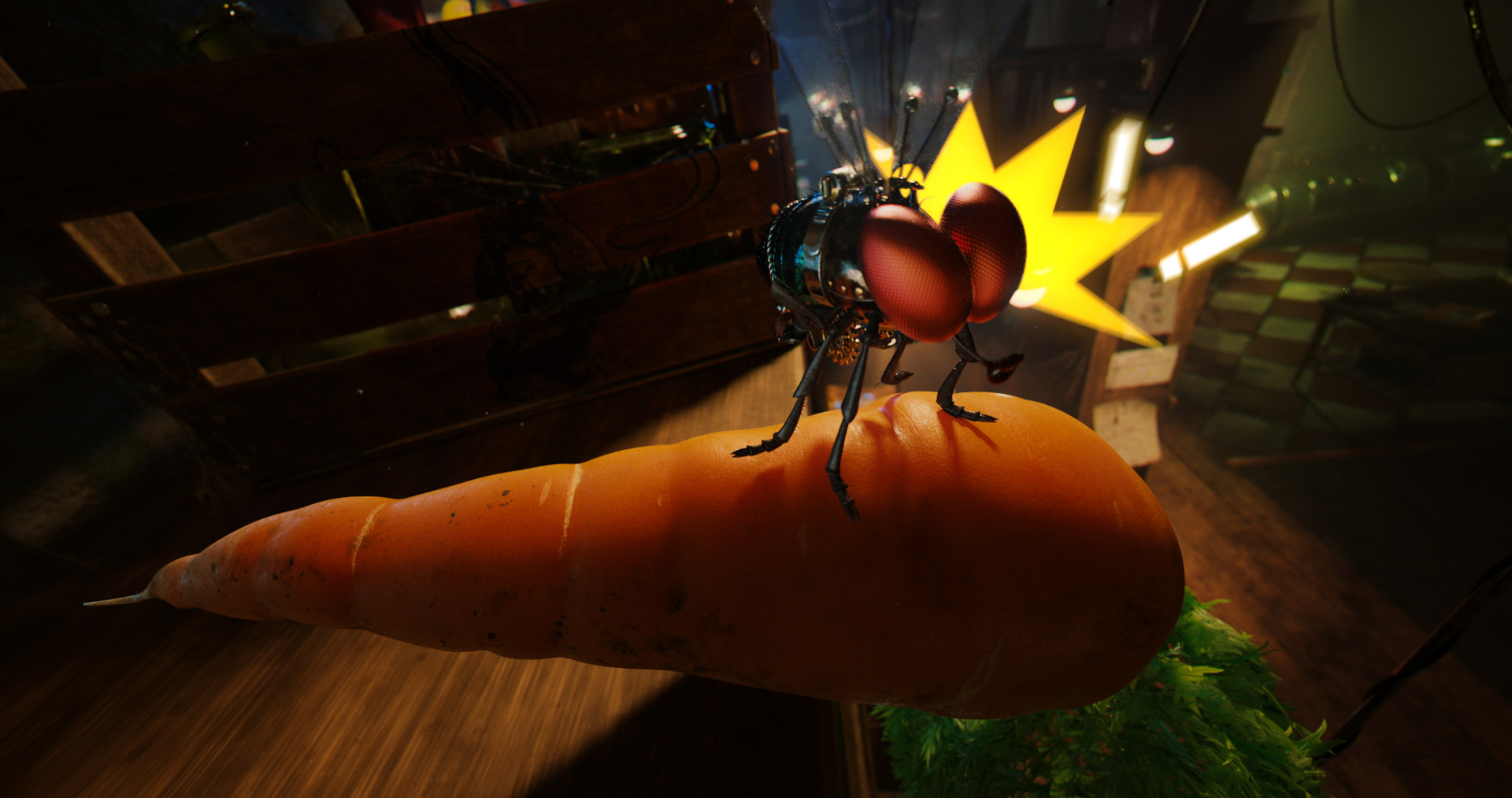 Could you talk about working with Beardyman to create the character voices? What was your directing process with him?

We are huge fans of Beardyman, it’s common practice to watch his videos when we are working late to cheer the team up, and many times we wondered how we could illustrate his voices and sounds.

When we were working on the sound effects Beardyman shared a video on YouTube called ‘One-Mouth-Does An Entire Horror Movie Scene’ and that couldn’t be at a better time! As soon as we saw it we realised that he would be the perfect artist to make all the character voices and some sound effects. We didn’t know him personally but we reached out with a WIP of the film and he loved it! He is an incredible, creative and talented voice artist, and the chemistry was instant. As soon as he saw the first character on screen he immediately and perfectly incarnated its personality.

Don’t Feed These Animals has music driven storytelling, just like the Warner Bros. classics, the music highlights and goes side-by-side with each detail on the animation.

It was really fun and easy to direct him and be surprised when he pictured something different from us. We just had a few guidelines, the voices shouldn’t sound like they were made by a human, the Carrot should sound young and naive, the rabbit should almost resemble the Tasmanian Devil, not sound evil, but hungry. The Onion would be ultra vile and shake the whole theatre. The fly is Beardyman’s favourite character and he literally gave wings to his imagination giving her a voice. 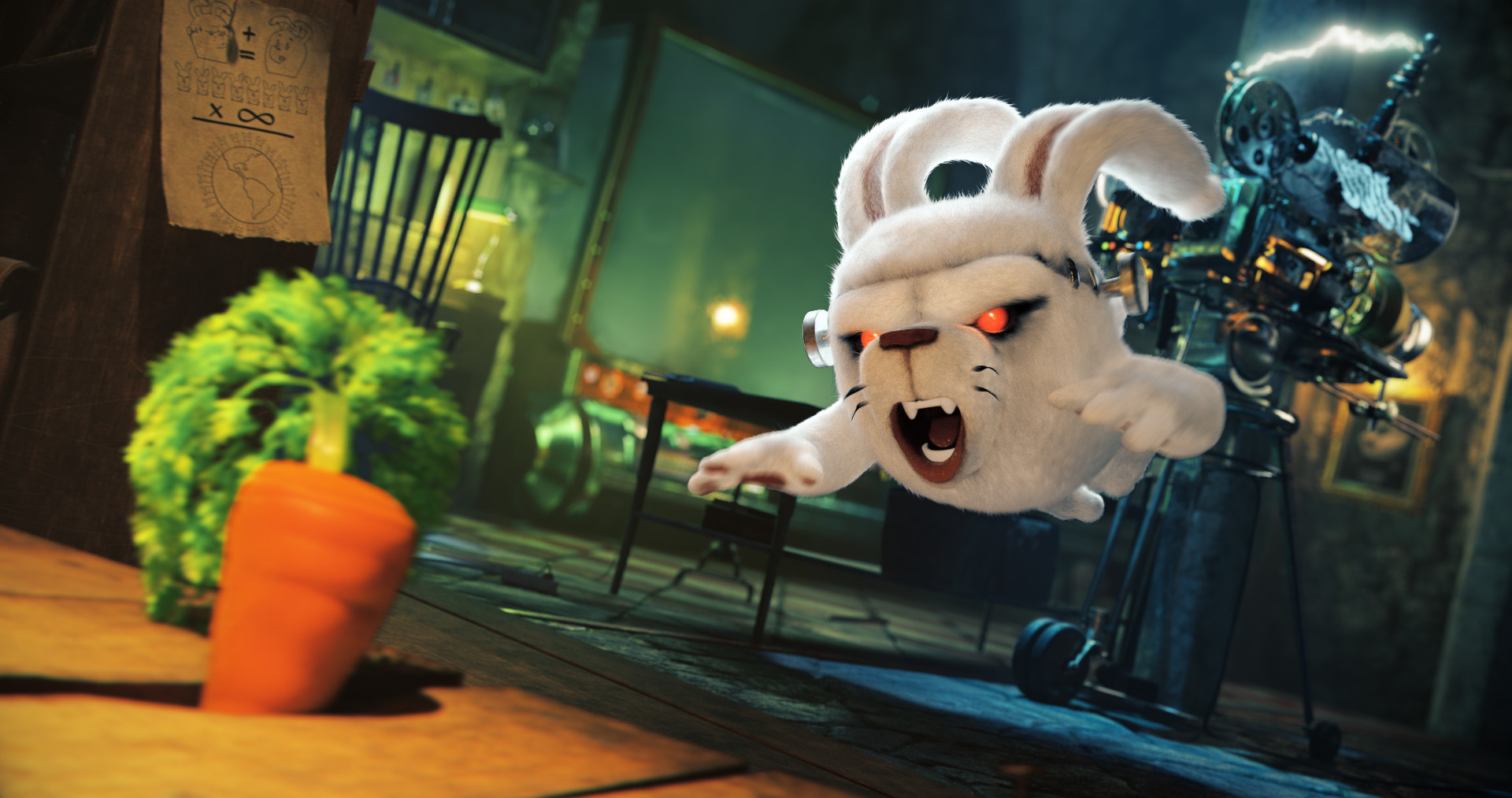 Beardyman’s voices were a perfect match for the music composed by Steve Rucker, the sound effects give context and the music gives emotion. Don’t Feed These Animals has music driven storytelling, just like the Warner Bros. classics, the music highlights and goes side-by-side with each detail on the animation.

Don’t Feed These Animals is our first film as we work mainly in the advertising industry, in animation and live action. Making films has always been our dream, and in between ads for juice brands, championship intros and telecom films, we managed to produce this film. We want to make our path to content creation like features or TV shows. Who knows, a Don’t Feed These Animals based series!? Lob0 is still very hungry.