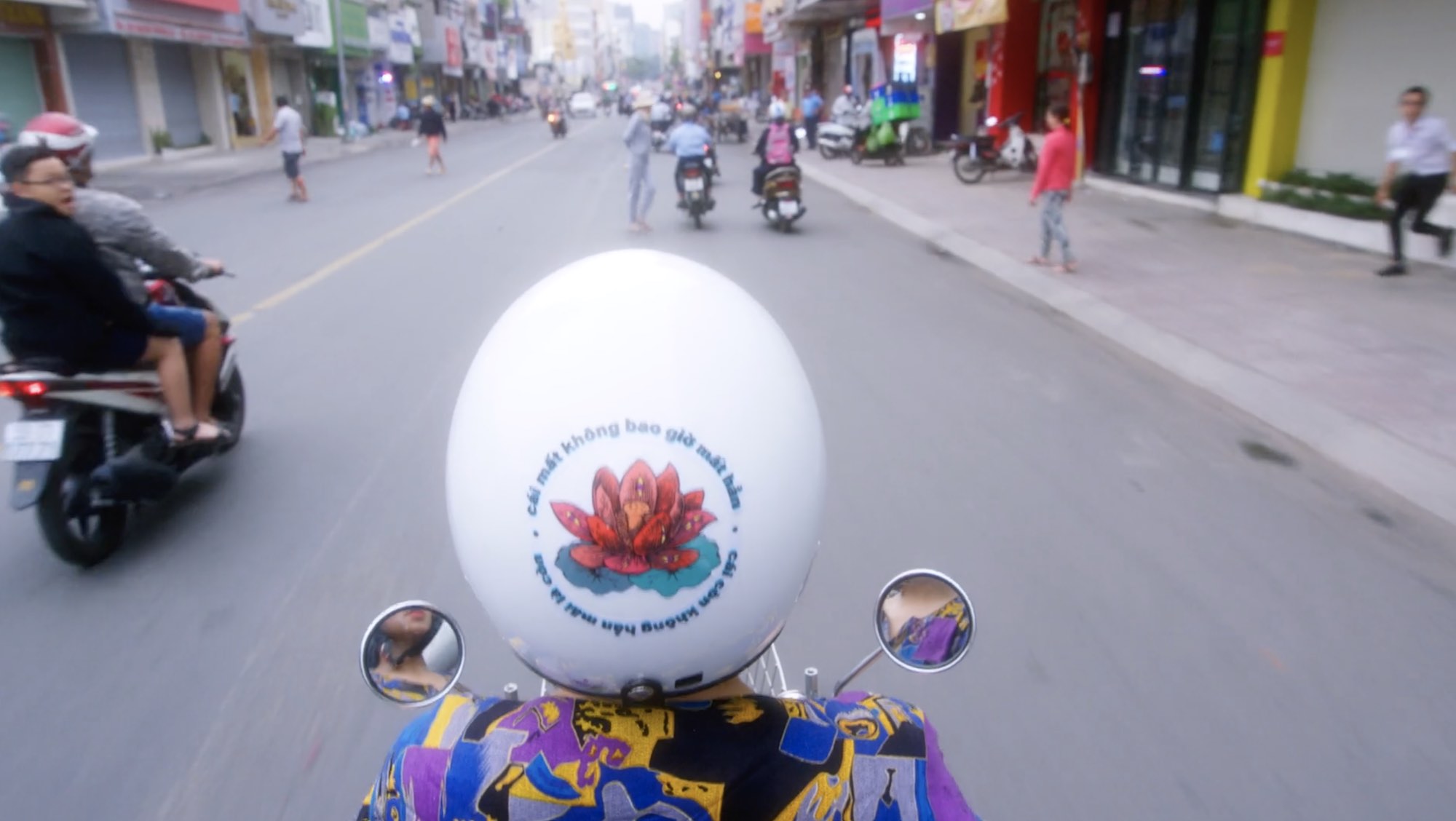 Capturing the melancholic aesthetic of a Wong Kar-Wai film and melding it with the wry humour of Wes Anderson, Sigh Gone centres on the hustle and bustle of daily life in Saigon. We meet Thuy, who is distraught after the loss of a great love, she’s rolling around on her bathroom floor and decides to get up and do something productive. She ventures out into the city in hopes of distraction, unaware that Saigon has other plans for her. DN spoke with Director Jeannie Nguyen about her cinematic influences, shooting in Saigon, and working with a Vietnamese crew. Spoilers ahead, watch before you read!

Where did the idea for Sigh Gone begin and how did you develop it?

I remember losing my phone and having to write down directions on a piece of paper, it was tedious and I felt pretty useless. I always had a fixation with how attached people are with their devices so making a film about it came naturally. I thought it would be a nice twist to make it seem like it was about something it’s not to get people thinking about their relationship with their phones. The idea of filming in Vietnam came first. It’s such an underrepresented country and being Vietnamese-Americans we wanted to create art around it.

Andrew and I first dug deep for tons of reference photos. We were heavily inspired by Wong Kar Wai, Wes Anderson and a few short films that had a whimsy, fun appeal. We talked about creating a dreamy atmosphere and juxtaposing the minimal, quaint apartment for the first half with the busy streets of Saigon in the latter half. We wanted to evoke a state of chaos, kind of how someone would feel when pulled out of their comfort zone. Our trip was only for two weeks, so every day we would scout and prep, until the last two days when we jammed in two full days of shooting.

We all had the same mentality to work fast, get scrappy and have a good time.

I felt the influences from Wong Kar-wai and also Sofia Coppola with the dream-like colours and tones. I love how Sigh Gone plays on the melancholic themes of those filmmakers as well but in a refreshing, playful way. Other than Wong Kar-Wai, were there other filmmakers/films that inspired your visual direction?

We had a lot of photo references that we scoured the internet for. Beyond Wong Kar-Wai, we were influenced by the playful, whimsical Wes Anderson vibes, but without overdoing it, and the muted, melancholic tones from Dogtooth by Yorgos Lanthimos. We were inspired by short films like Creme Caramel by Canada and Copa Loca by Christos Massalas.

What was it like shooting in such a dense and busy place as a Saigon, were there many hurdles with gaining access to locations and blocking certain scenes?

It was my first time and such a great experience. We worked with our Producers Nau and Quan from Blaze and they helped a lot with organizing the shoot, finding talent and locations, and connecting us with the right people. There was something very comforting about working with the locals. Even though I was born and raised in the states, there’s something innate about working together, it’s hard to explain but it felt very natural. Everyone busted their ass and had a great attitude, I couldn’t have asked for a better first experience. We all had the same mentality to work fast, get scrappy and have a good time. We didn’t have many hurdles with locations, everyone was pretty open with letting us film.

What lessons from Sigh Gone will you take onto your next film?

Probably to touch up on my Vietnamese if I plan on shooting a bigger production. It was pretty time consuming and frustrating having our producer translate to the talent and crew. A few things got lost in translation which would set us back.

Rewatching Sigh Gone, there are many subtle hints about the final reveal that I didn’t notice on the first time through! Could you talk about planting the hints without being too heavy handed in making it obvious to the audience what Thuy is actually looking for?

I’m glad you caught the hints! I wanted to leave little Easter eggs because I always find it fun as a viewer to catch them. I made sure they were as subtle as the voiceover so there are no spoilers, but those who know me personally, knew right away that she wasn’t speaking of a boy, heh.

I’m currently finishing up a feature length screenplay that takes place in Vietnam. I also have a concept for an episodic that I’m expanding on and a short film that I’d like to shoot on 16mm sometime in the next few months. I’m trying to keep the momentum going.

Sigh Gone is one of the many great projects shared with the Directors Notes Programmers through our submissions process. If you’d like to join them submit your film.