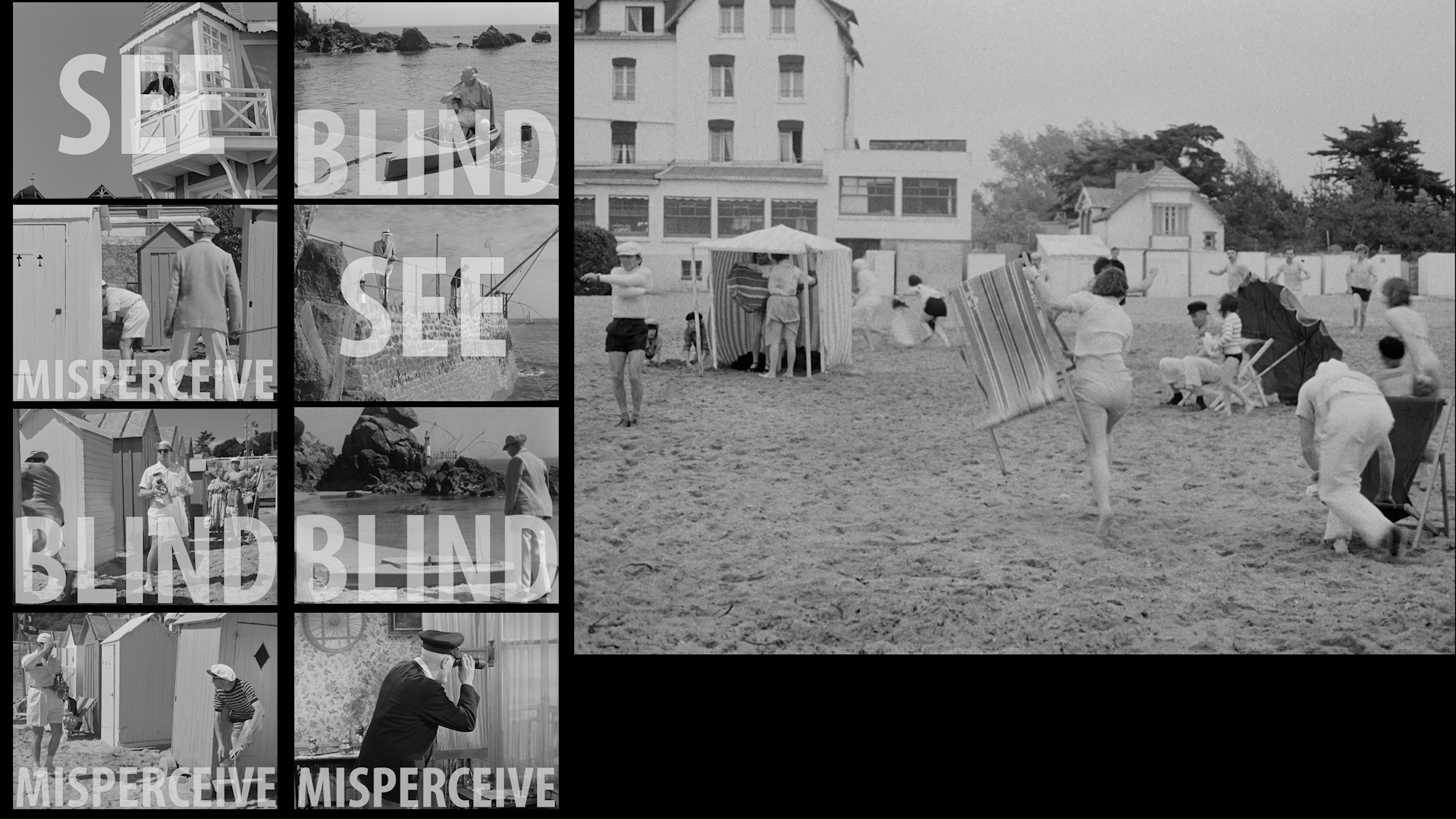 Breaking down the visual logic of a Tati gag.

I can clearly remember the experience of first seeing Jacques Tati’s comedy masterpiece Playtime. It was a strange mix of wonder at the fabulously detailed frames of action captured in long takes, joy at the ridiculous antics of Monsieur Hulot, and a disquieting feeling that as I focused on a particular piece of action I was undoubtedly missing other equally, if not more so, entertaining set pieces. Needless to say, I bought a copy soon after yet despite multiple viewings, can’t shake the feeling that I still haven’t seen all that Playtime has to offer.

This idea of concurrent versions of the film existing to be experienced simultaneous depending on the audience’s focus is what prompted Film/Media Studies Professor Eric Faden to dive into a considered exploration of the concept of inattentional blindness through the work of Tati, Haneke, Hitchcock and others in his engaging ‘show don’t tell’ video essay Visual Disturbances – which premiered in open access journal [in]Transition. You can watch Visual Disturbances below, after which Eric and I discuss the techniques and modified eye-tracking technology he used to make the methods of invisible cinema visible.

What set you on the path of exploring the use of inattentional blindness in the filmmaking of Jacques Tati and others?

The initial concept for this film emerged from a screening of Jacques Tati’s PlayTime. The theatre was packed and I had arrived a bit late and was seated in the back. The film was great but the audience behavior was arguably even more fascinating. There were these ever shifting pockets of laughter that moved around the theatre. While part of the audience laughed, the rest looked at those laughing and then back to the screen to search for what was funny. I suddenly realized we were all seeing a slightly different PlayTime, that each viewer was perceiving a slightly different film from the person next to them. And this experience radically contrasted with the homogenous experience of Hollywood cinema.

[Clustered eye tracks reveal a focused audience in North by Northwest whereas the audience visually roams the image in Mr. Hulot’s Holiday.]

Each viewer was perceiving a slightly different film from the person next to them.

Years later, I read Psychologists Daniel Simon’s and Christopher Chabris’ journal article Gorillas in our Midst (and their later book The Invisible Gorilla) about inattentional blindness – how human perception can often miss key people or objects even though they are in plain sight. I began thinking about how this work in psychology could be applied to cinema and especially to Tati. My goal with Visual Disturbances was to investigate those films and filmmakers that use inattentional blindness as a conscientious stylistic choice.

How do you go about planning out and crafting a ‘visual essay’?

As a film scholar, it makes no sense to only write words when studying a time-based visual art form like cinema. Thus, I’m very interested in how research can be presented in a visual form. Visual Disturbances is an academic essay but done in the form of video. Each section builds parts of an argument but approaches that argument in slightly different ways with different methods. The challenging part for me was figuring out the best way to present that argument in each section. 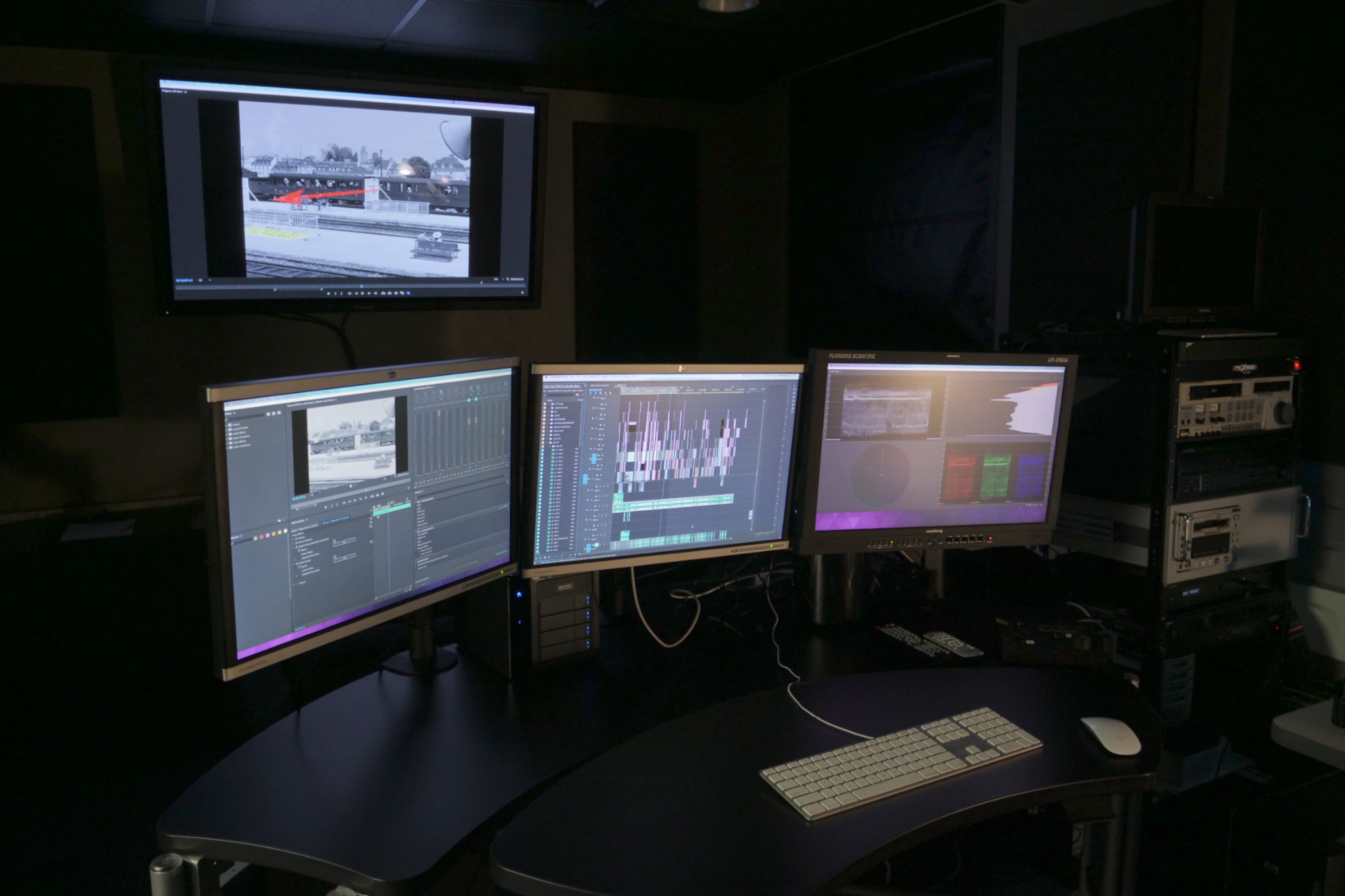 My “writing” method is rather unconventional (and super inefficient!). I have a three monitor setup and on one monitor I have a Word document that outlines the argument plus notes and sketches about how that might look visually. On the other two monitors I have Premiere and After Effects loaded with all the media I’m using for that section. And I go back and forth – playing with the film footage, how it will be laid out on screen, what annotations it will have, how it will be manipulated, and then writing more notes about the argument. The film’s “text” slowly emerges from this process.

As a film scholar, it makes no sense to only write words when studying a time-based visual art form like cinema.

I’m also very interested in producing works that both present and demonstrate concepts. Almost all of my previous video essays work on multiple levels in this way. In Visual Disturbances, I thought the most effective way to explain inattentional blindness would be to have Christopher Chabris (co-author of The Invisible Gorilla) just discuss it in his own words. However, we shot the scene so that the very phenomena he’s discussing (the inability to see things in plain sight, the inability to detect obvious changes) occur as he talks about them. It is much more powerful and persuasive to both hear about a concept while experiencing it. 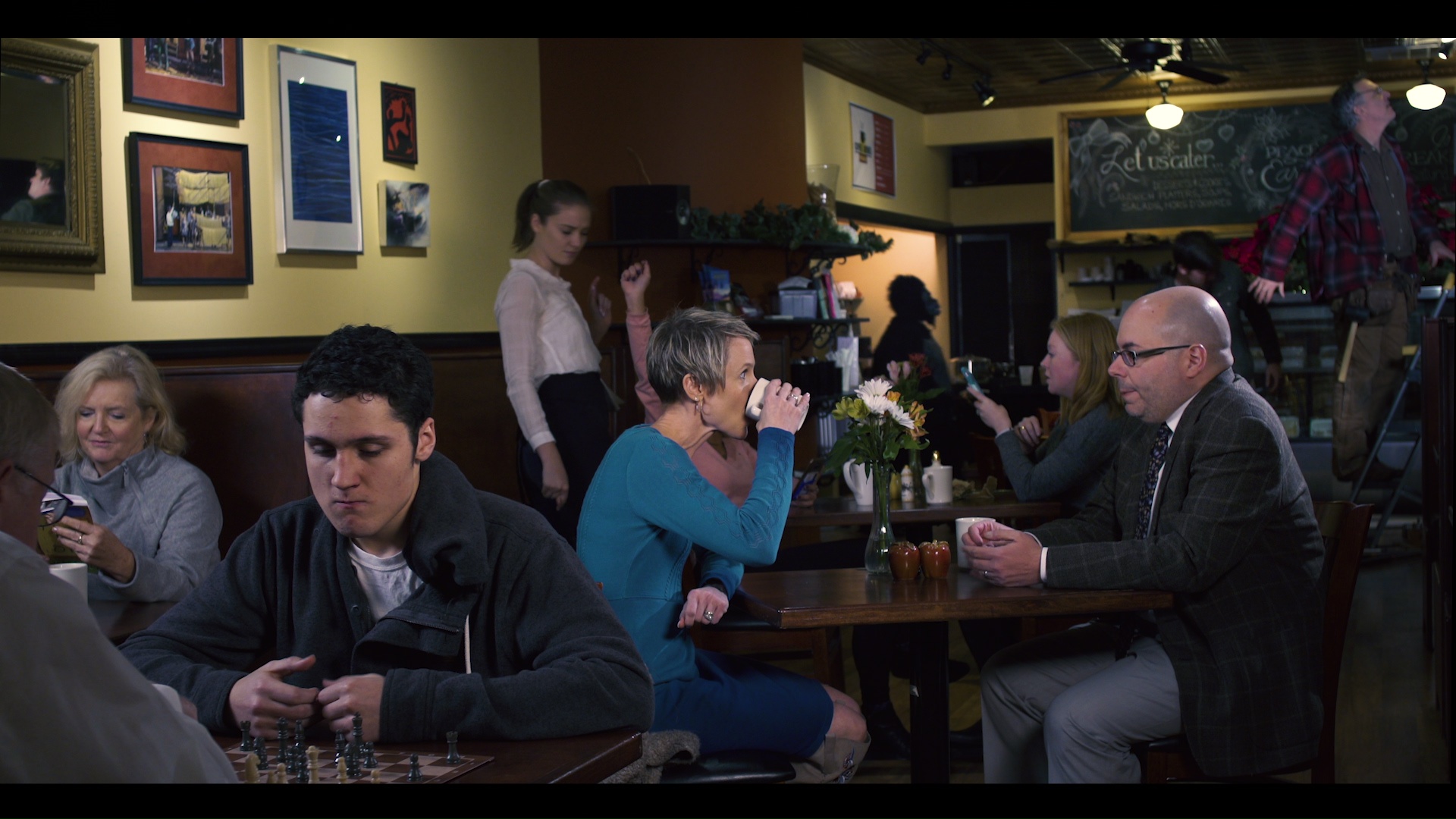 What tools and software made Visual Disturbances possible?

The live action material was shot on a Sony FS5 at 4K with a Zeiss 18mm prime lens. The scene required a lot of lighting as it was a large space with significant depth of field. In fact, choreographing that scene was a big challenge so I asked my colleague, Director Anjalee Hutchinson, to co-direct with me as there were just too many events happening simultaneously for one director to watch.

The eye tracking material resulted from collaborations with Psychologist Aaron Mitchel and Mathematician Nathan Ryan and their students Taylor Myers and Alexander Murph. We used a Tobii eye tracking system at Bucknell University’s Multisensory Speech Perception Lab to capture the fixations of 26 subjects who watched about 15 minutes of film clips from Tati, Hitchcock, and early filmmakers. A few days later, the subjects returned to rewatch the same clips while we again recorded their fixations.

Unfortunately, the Tobii system isn’t really designed to output video like we needed for the film and certainly not at the 2K resolution I wanted. So, I developed a technique for extracting just the eye track visualizations from the low resolution Tobii video output and then remapping those eye tracks onto an HD or 2K source.

For the aggregated eye track visualizations (the rectangles), Mathematicians Nathan Ryan and Alexander Murph applied the data output from Tobii (about 2.4 million data points!) to a custom Python program that calculated the rectangle size and then generated the animation into a video file. These files were then scaled and composited onto the HD or 2K film sources.

It is much more powerful and persuasive to both hear about a concept while experiencing it.

[When re-watching a film, audiences see the same image in North by Northwest but attend to different areas of the screen when re-viewing PlayTime.]

How long did it take to complete this project?

The film took about nine months to produce but this project also had a lot of moving parts and collaborators which all took time to coordinate. Since the film was done on a minuscule budget, a lot of things that would normally be done simultaneously instead happened consecutively. For example, the film was near completion when Composer Troy Schwab came on board and I ended up making a lot of adjustments based on his musical ideas.

However, I’m a big fan of slow filmmaking. I’m in the incredibly fortunate position of being paid to make these types of films as part of my job. What I lack in budget, I make up for in access to resources and the priceless luxury of just thinking for extended periods about each aspect of the film. And I believe that time to contemplate the film’s construction and execution pays dividends in the final product. 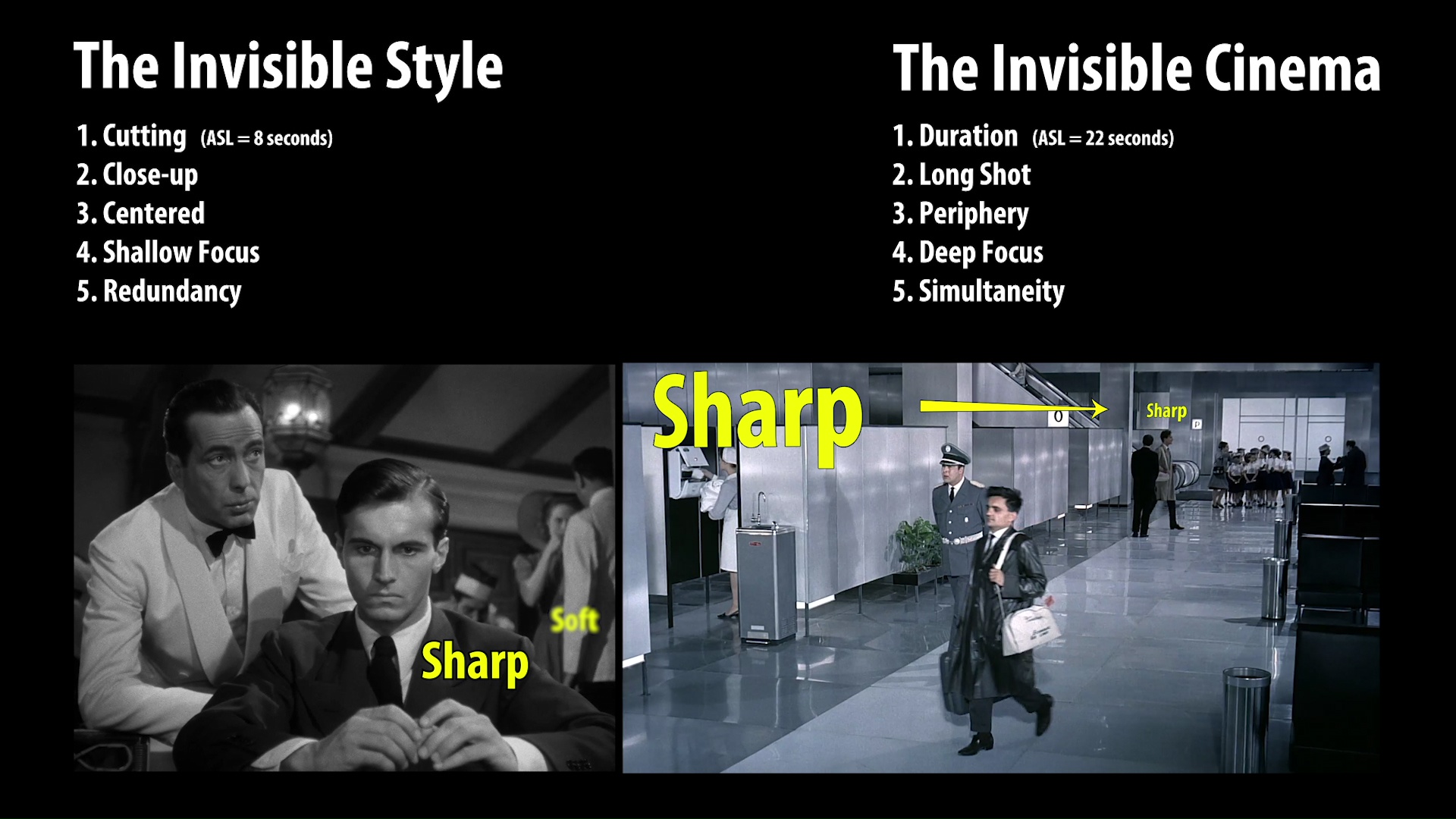 Analyzing how Hollywood cinema differs from the Invisible Cinema.

Do you know which aspect of film you’ll be casting you analytical eye on next?

I’m currently developing two projects: one is a fictional short that will be shot in spring 2020 with co-director Anjalee Hutchinson and the other is a video essay on transmedia storytelling in very early Japanese cinema (and even pre-cinematic devices). I’m currently living in Japan now and developing that project.