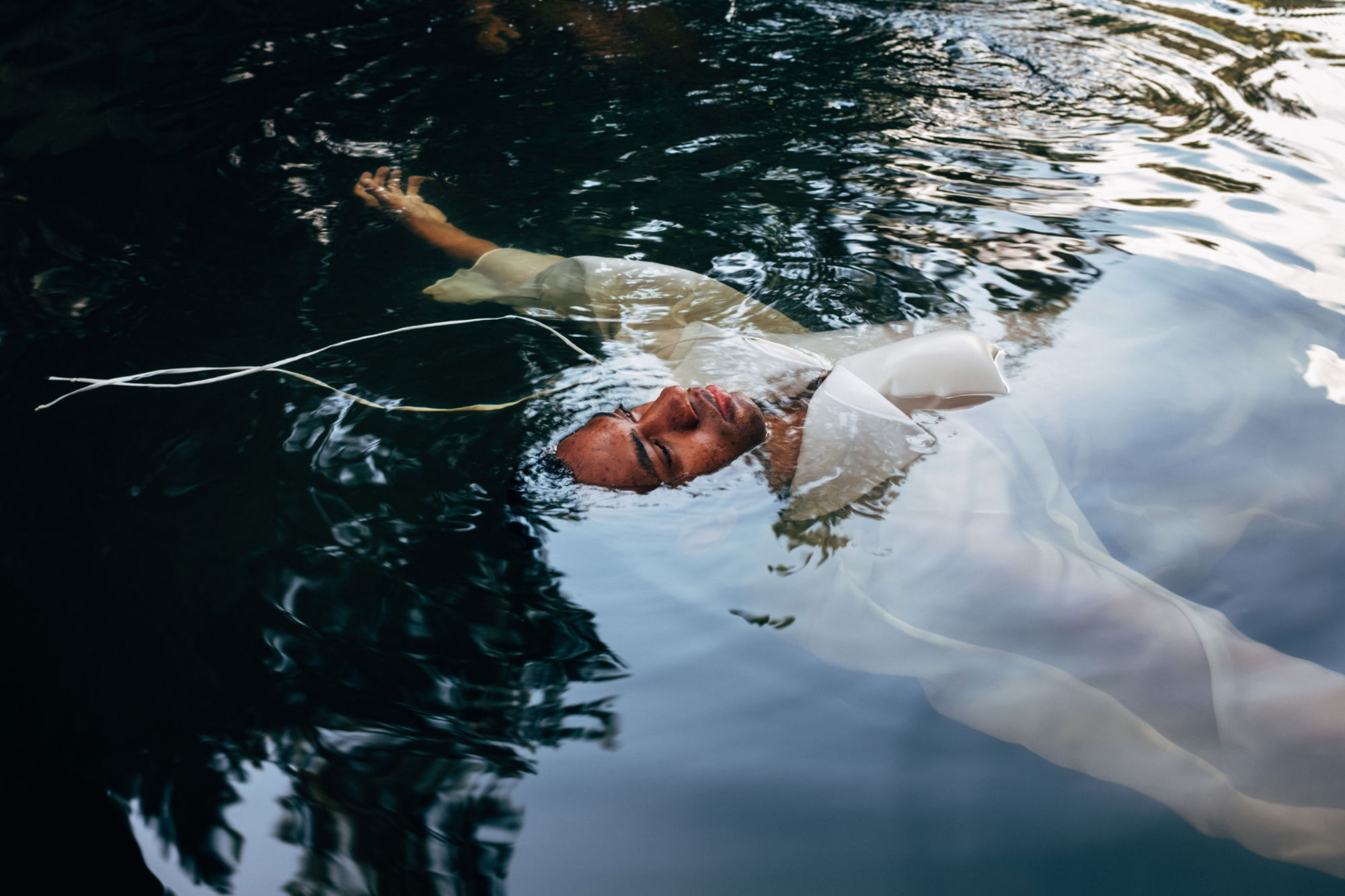 Examining the feelings of loneliness and insecurity which can sometimes rise up to overwhelm us, Defectively from director duo Vira-Lata (Giordano Maestrelli & Duran Sodré) sets out to “visually explore subtle feelings that we usually don’t pay that much attention to”. The Brazilian filmmakers join us to discuss building wells from scratch and why they shot on 35mm, despite the fact they had “never even touched a film camera” before.

The whole idea of this film is to visually explore subtle feelings that we usually don’t pay that much attention to. Marrakesh’s song talks about imperfections and life’s sharp edges that we have to deal with; and that, by itself, is a really powerful concept. When doing some research and sorting things out for the treatment, I stumbled across the work of Japanese photographer Rinko Kawauchi. One of the things that struck me the most when seeing her photographs was how she was able to evoke feelings of fragility and anxiety with inanimate objects. All of her images have some kind of tension inside them that we desperately try to avoid, but, in the end, we shouldn’t.

Duran Sodré (my directing partner and the other half of Vira-Lata – our directing duo) and I soon decided that our final goal with Defectively was to create these imperfect and faulty scenes, in order to realize that we don’t have to fight the world’s instability, but embrace it. All the chorus shots and the film’s aesthetics follows this concept: a fly trapped inside a glass, a beautiful vase full of rotten flowers, a wall with stains and marks on it.

The performance and dance scenes were the way we found to translate the song’s movements and dynamics. Along with odd framings and compositions that seem “wrong” and out of place, Leopolldo, the main character, did an amazing job of translating these anxious and tense feelings that lodge inside us. During the whole film he performs energetic and powerful moves, just so that, in the end, he accepts that he will never get rid of those things that are trapped inside of him and, ultimately, accepts them.

During pre-production, Yuri Maranhão, our DP, had the idea to shoot on 35mm. We’d never even touched a film camera, but this was a project opened to experimentations, so we went for it. We didn’t have that much film stock to burn, so, in the end, shooting film was a form of focusing more and more on shooting lists, framings and making sure that everything fitted right. We had a 3:1 ratio, which meant that for each shot we had three tries to get it right. That was a big challenge when facing the performing and dancing scenes, but turned out to be a great “limitation”.

Leopolldo and I did a lot of rehearsals and walked through the film a dozen times, but we decided that we wouldn’t establish a choreography. He knew all the song’s dynamics and changes, and we had movements and feelings that we wanted to express in each part but realized that improv was the best form of achieving the energy and rawness that the film needed.

I remember that when shooting one of the first scenes, on the first day, Leopolldo and I did some really simple and light rehearsals – nothing that would tire him – while the crew got everything ready. When everything was set and ready to go – it was the first shot of the day – Yuri started rolling the camera and Leopolldo turned himself into another person and gave an amazing performance that made all of the crew’s jaws to drop. When it ended, no one had words to describe it; we ended up doing one or two extra takes, but we managed to get all of the dancing scenes on the first or second take. Leopolldo truly is an amazing artist.

Improv was the best form of achieving the energy and rawness that the film needed.

The whole process took about one month – from presenting the treatment to the band, scouting locations, shooting and editing/grading. We visited locations a handful of times with Yuri and Laís Melo (our production designer) to be sure that everyone had everything really well sorted out, as we didn’t have any room for mistakes.

We had the full support from the production company that we are represented by, The Youth. Since the beginning, the whole team there embraced the project just like we did, and everyone worked together to make this music video happen. The whole crew that worked with us on this project were people that have worked with us and The Youth for a long time, and, because of that, we were able to gather some really skilled and A level talents on this low-budget project. Our executive producers were always by our side and made sure that we had everything we needed to do the best music video possible, even if that meant sending negative cans overseas or buying 500 bricks to build a well for just one shot.

However, as it was a passion project, we ended up doing a lot of the production ourselves. Duran and I would drive around Curitiba’s (the city where we live and where the film was shot) countryside to find the perfect country field for the ending shot and the well scene. A fun thing to note: we built that well from scratch. Myself, Duran, Laís, a stagehand and an art assistant got there at 8AM, dug a hole, carried the bricks, built the well, gave it some texture and rough finishing, shot the scene around 2PM and by 3PM it looked like nothing ever happened there. Those are the benefits of having a really small and stress-free crew.

Shooting the band scenes was also only possible because of this compact and excited crew that we had. We took a long time to find a nice location to shoot the band scenes and on a Wednesday morning during our shooting week we visited a possible location and really liked it. It was a small airfield. We soon noticed that some really heavy thunderstorms were predicted from Thursday onwards, so we had to shoot that same day.

We’d never even touched a film camera, but this was a project opened to experimentations, so we went for it.

We went back to the city, grabbed the camera, the grip structures that we needed, passed by our ACs’ houses to pick them up, told the band to get ready and by sunset we were shooting. A lot of people asked us how we managed to pull off those shots of the band members standing still while the background moved. We did that by connecting two dollies on a 360 degree dolly track. On one of the platforms stood the camera and on the other one, one of the band members. So, whenever the camera moved, the band member would move along with it. Those turned out to be some really nice shots.

Grading this film was a whole other experience. When we received the ProRes Proxy graded files from the lab (MetPost NY) we were stunned by its look. In our opinion, there wasn’t any more grading needed as it already looked awesome. But Osmar Junior, our colorist, changed our minds when he sent us his first grading studies. I was having dinner with my girlfriend when he text me, “Dude, check this out”. I took a look at it on my phone and was amazed by how he was able to transform something that already looked beautiful into something gorgeous. We didn’t want to create these really low key and contrasted images. But, instead, images made mainly by mid-tones and shadows. There were no diffusion filters and no haze, and we wanted to explore a different visual than the ones that we are used to. Osmar did a great job of embracing and seeing the film the same way we did.