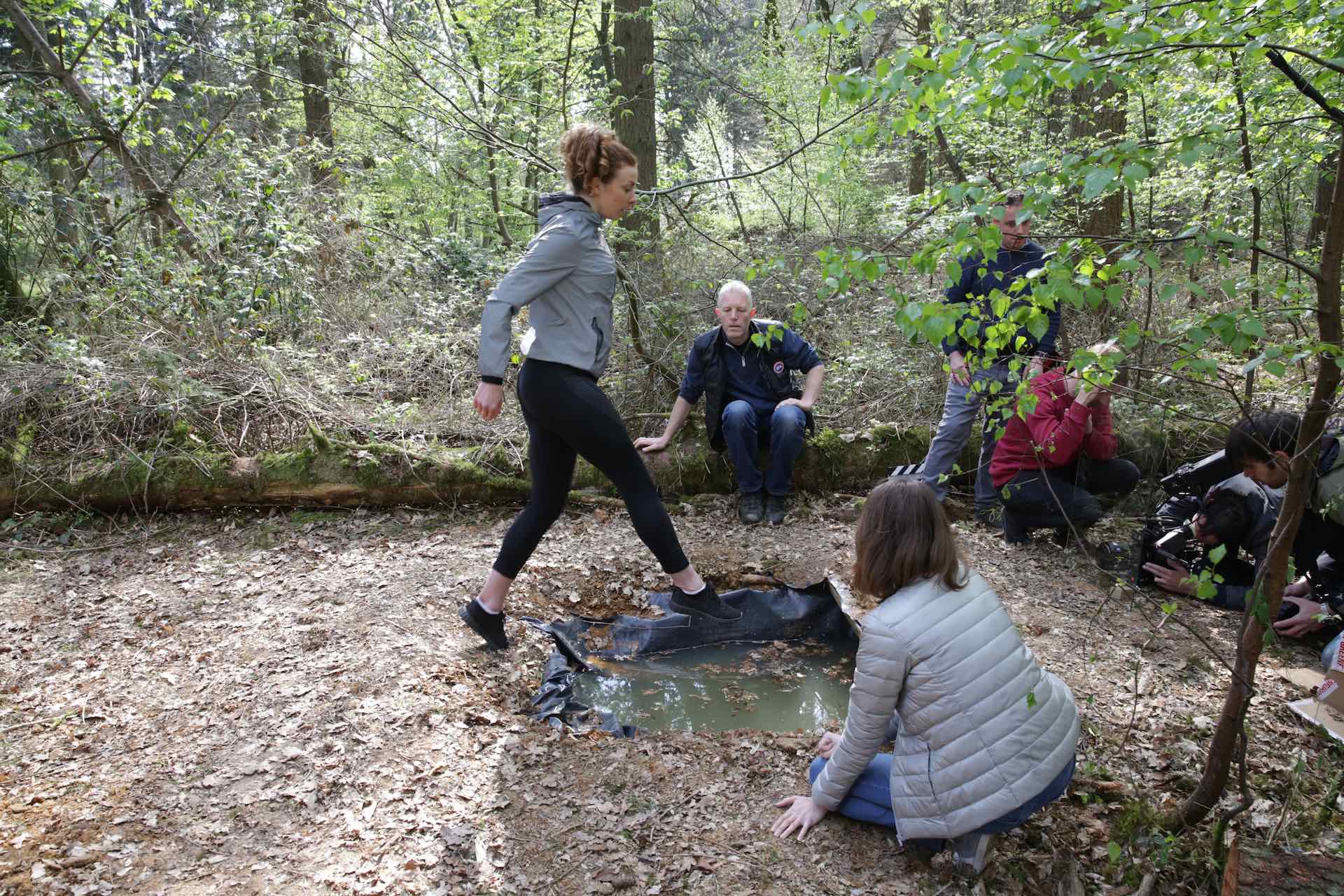 As someone who can get obsessive about film, there are those I can watch and never need to know any more about, then there are those that stick in your mind and you start to interrogate every decision the filmmaker made. Tim Keeling’s six-minute short Two Puddles is a film that’s been hanging around in my headspace since I watched in on Short of the Week at the start of July. An enigmatic short, that’ll leave you with more questions than answers, Writer/Director Keeling joins us to discuss how skepticism about monogamy led him to his story and how gravediggers in a natural burial site helped create the titular puddles.

Two Puddles is one of those films where the idea feels quite simple, but so original it’s impossible to forget. Can you tell us a little bit about how the concept originated and how you developed it into the final story?

The image of somebody wholesale falling into what appears to be a puddle was so amusing to me that I started to imagine what kind of story could interact with that moment. During the writing process, I was dropping different characters into the melee from different frames of reference to see who might struggle the most. The idea to have the characters emerge from a second puddle was in a bid to make it more ridiculous.

For me, there’s two very separate enigmatic aspects to the film. Firstly, what’s the deal with the puddles? And secondly, what’s the situation with the family dynamic? Obviously, it’s up to you how much you want to share on either of these aspects, but even if we don’t focus on specifics, why did you decide to add these two mysterious elements to your narrative?

I find that looking for irony is a helpful guide in the writing process.

Where I was coming from when writing this short was a growing skepticism about monogamy as the status quo for how we partner up and build a family. So I was thinking about characters interacting with that same skepticism but from inside a monogamous relationship: a Mother and Father enduring one another, exploring their needs independently because they weren’t being met in the relationship, all the while keeping the appearance of stability going for their daughter.

From this came a literal story design: a Mother has to physically let go of an attractive younger woman to get her daughter back. And for me, this was like saying, this Mother is given the dreadful choice between having to “let go” of the destructive suspicion her husband is cheating on her with a younger woman so that her daughter can continue to have a positive relationship with her Dad, her rock – OR – hang onto that suspicion, pull it back up – say it out loud, accuse the Father, maybe show him up to be the bastard he is in front of her daughter. For me that was a lose-lose for the Mother because of the close, important relationship she acknowledges between the Father and Daughter.

The Jogger character is purely symbolic in this way – whilst she’s not the young woman that the Mother suspects is having an affair with her husband, she’s pulled into the story as a product of the Mother’s (hopefully relatable) confirmation bias.

It was an experiment on all fronts: what issues I’m exploring in my life, what does that look and sound like in cinema, how is it going to be told in an original way. Since making the film, I’m in a monogamous relationship so I’m all over the place really.

The Puddles act as a kind of catalyst to articulate separation. They’re an inciting incident that’s going to cause problems with pretty much any character that falls in. But more than anything else, it was amusing to me that these Puddles would seem really scary because your loved one just wholesale disappeared before your eyes – and how shocking that would be if it happened to us – but actually – nobody’s life is in mortal danger, yes an existential challenge to our characters, but nobody dies.

Two Puddles begins with such a memorable opening shot, what made you decide to throw your audience directly into the action?

Short film festivals. I’ve sat in shorts programmes and half the time I don’t know what’s going on. It’s not the shorts, it’s my attention span. I just wrote the thing that I thought would get my attention.

I hoped the opening sequence would buy me the subtler picnic scene where we’re just looking at eyes and body language to try to build a picture of this family dynamic. I was so excited about that scene, but didn’t think the audience would invest in it unless they could maybe see where it was going, why they might care.

It’s been interesting hearing feedback on the film. Some people say the picnic scene is their favourite part, others think it’s redundant.

Production-wise, I’m assuming the most difficult part of the shoot were the puddles, how did you go about achieving these water-filled-wormholes? I’m assuming they’re real puddles, no FX-wizadry – what did these mean for your production?

I felt the Puddles needed to be real so we wouldn’t focus on how it was done. What appears on screen as two very deep puddles was dug by gravediggers in a natural burial site near to where I grew up in South-East England. We couldn’t afford two graves, so what you see on screen is really one grave dressed to look like a puddle and then composited into a second position in the wide shots. The gravediggers reinforced the walls so it wouldn’t cave in on the actors. Despite the pond lining, the water persistently found a way out and so the schedule was constantly changing as the crew fought with the water level in a remote location to get the shots.

We’d rehearse right up to the take because once they were wet, the body went into shock.

Another major concern was freezing cold, soaking wet actors in the middle of the woods. We’d rehearse right up to the take because once they were wet, the body went into shock. Notes had to be kept to the absolute minimum because it was so cold. We had loads of towels, foil blankets and a portable heater 10 metres away from the Puddles to get them warm as soon as we had it. Production manager Darren Crisp was absolutely key to ensuring the safety of the actors, and the efficacy of the Puddles. We would not have been able to complete the film in the allotted two days without him. 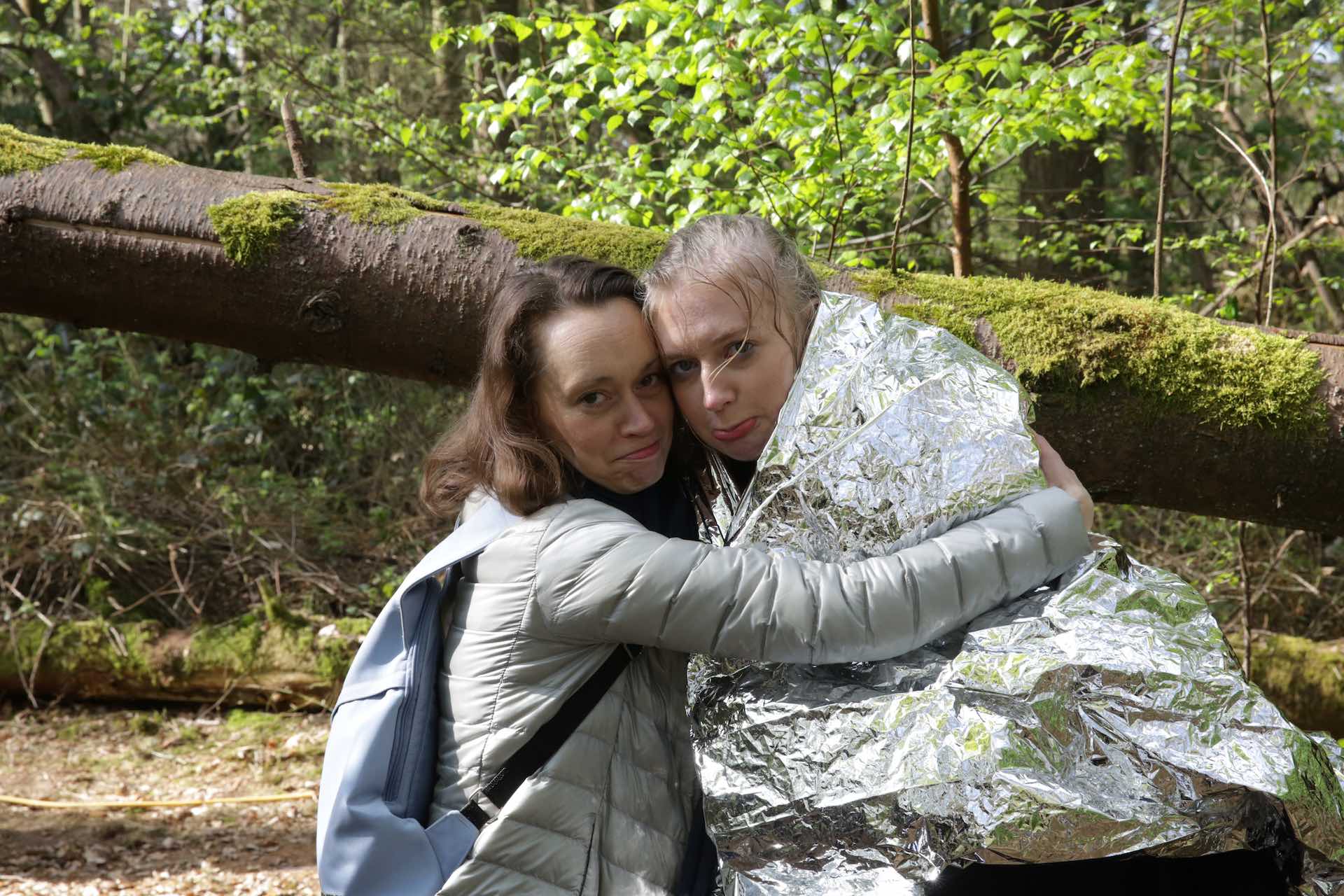 Your cast do a great job of capturing that family dynamic I mentioned earlier, how did you go about casting them and how did you work with them to make their performances feel so believable?

I’d worked with Julia Florimo (the Mother) and Luke McGibney (the Father) on my first short, Yoke Farm and the shorthand we had from that familiarity really helped bring the characters to screen. Amy Keen (the Daughter) was cast through Television Workshop in Nottingham, so that she’d have a similar accent to Luke. Helen Duff (the Jogger) I knew from the London comedy improv scene and Tom Bonington (the Dog-walker) was a recommendation.

There were a lot of unknowns between the characters.

With the picnic scene, what seemed to work for us was have the off-camera actors giving the on-camera actors much harsher, more conspicuous performances to react to. Between takes, notes were given privately and actors didn’t reveal their motivations to one another. This was an experiment and it’s hard to say if it made a difference because we didn’t shoot it both ways.

The idea going into production was there were a lot of unknowns between the characters – and maybe that might come out even more on screen if the actors don’t know either. The Father, for example, doesn’t know for certain if the Mother knows he’s having an affair and vice versa.

Between above-ground takes by the Puddles, actors would do star jumps and hyperventilate to keep the heart pumping so they were more physically in that frantic space. With the Puddles action sequences, those reactions are real. I mean, the water was so frigid that the authentic reaction is the take.

It’s hard not to talk about the film and not mention that imposing soundtrack, what made you go for this kind of score?

The score had to be very dramatic – just totally over-the-top – as if Nature thought we were ridiculous. We’re imposing rules and regulations on ourselves, so it does the same to us: one in one out of Two Puddles. I mean it’s all so ridiculous. And it’s like Nature sarcastically beholding us. And for me, Ben Squires’ composition really helps to get to that ridiculousness. It’s so overblown. We’re ridiculous creatures!

One of the things I really admire about Two Puddles is the edit, it gives it such a frantic feel and also means the film sticks to a tight 6-min run-time. Was this something you always had in mind when making the film or did it happen more organically?

In the original script, the family doesn’t go in and out of the Puddles as many times as they do in the final cut. After we felt the first pass of the edit was anti-climatic, we tried looping the action to try to build and reach more of a climax. We felt that establishing and then building and repeating the in-out in-out pattern was more pleasing than in earlier edits.

We didn’t set out to make a scene with no dialogue, it just seemed to sit better with the rest of the film.

The picnic scene had more dialogue on the page, but reflecting on the first edit, we wondered if the actors’ non-verbals alone could give us the relationship dynamic. We didn’t set out to make a scene with no dialogue, it just seemed to sit better with the rest of the film.

Ben’s soundtrack really changed the pace of the film. The more one section sped up, the more another section had to breathe. We went back and forth several times over a few months to allow his compositions to inform the pace and tone – and vice versa. 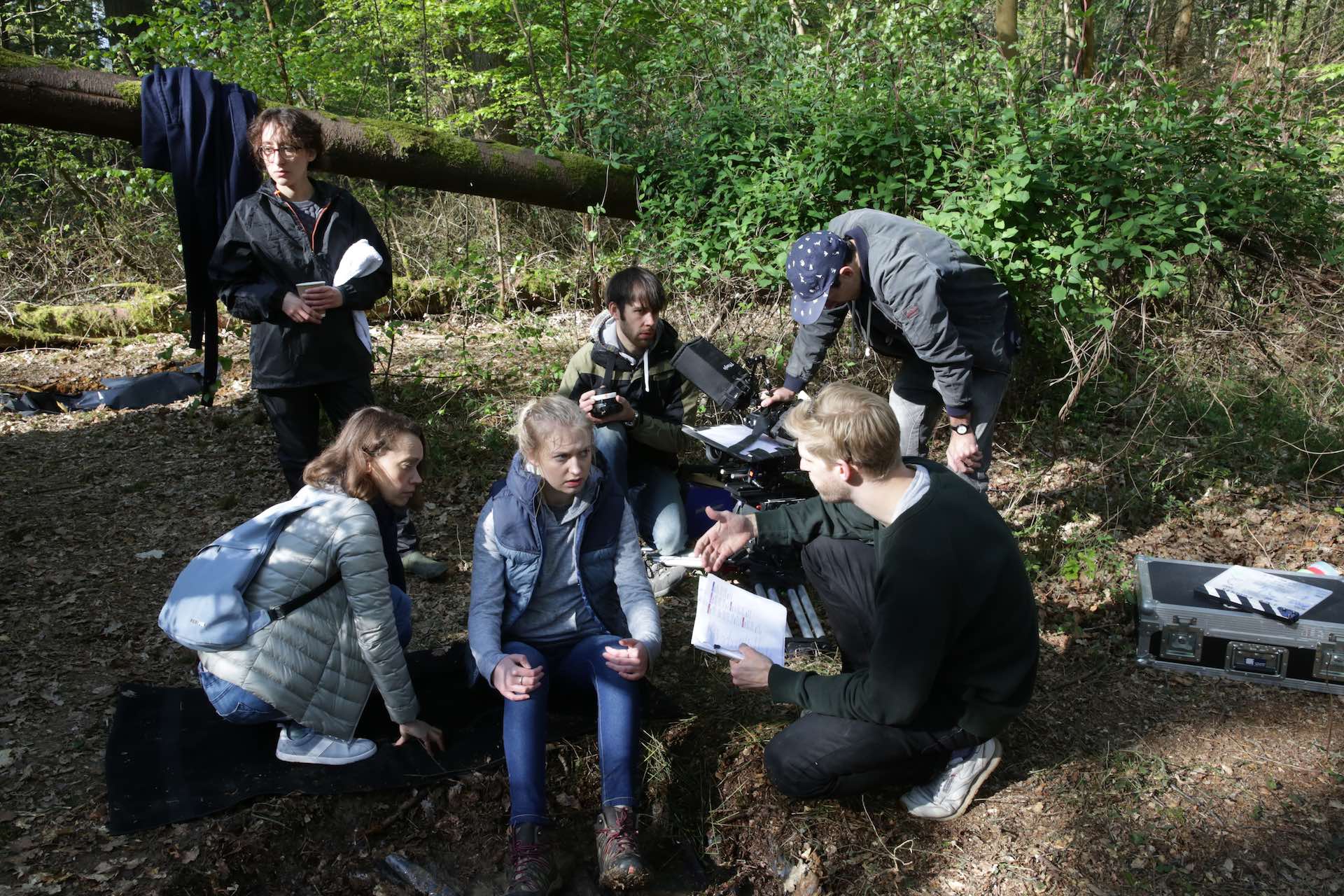 Where can our readers go to follow your work and are there any new films on the horizon they should keep an eye out for?

I’m currently writing Two Puddles as a feature. One major element that had to be fleshed out was what the characters experience in the Puddles and why – and how to show that cinematically. The central theme has shifted away from monogamy to the potential power in accepting we’re ridiculous creatures. I’m also developing a short film prompted by reports of a coastguard deliberately sinking dinghies carrying migrants in the Mediterranean. It’s in a similar tone of voice to Two Puddles and set on England’s South-East Coast.