“A descent into the psyche of an artist, reemerging through his work”, Inferno from Director Andrew Blackman takes us into the mind of Gui Taccetti and the images which are a spectacular manifestation of the Auckland-based artist’s journey through the anxiety of growing up gay in staunchly Catholic Brazil. Originally created as an accompaniment to Taccetti’s fantastical solo five-day theatrical exhibition of the same name (which included performances, parties artist talks and a wild celebration of identity and inclusivity) and making its online premiere here at DN today, Blackman guides us through the process of documenting Taccetti’s artistic practice over six months in the lead up his biggest and most ambitious exhibition to date.

A heads up, both the film and following article contain some NSFW images.

It was clear from the outset that I wanted to tell a personal story. The initial concept came from a series of conversations Gui and I had about our personal lives and how they relate to our respective creative practices. I was looking for ways in which we could relate to each other both personally and creatively. I would later compile our conversations from memory into this sort of continuous stream of conscious type reel. A list of ideas, references, images and themes that we could explore and later shape into a film.

Some of themes and images were informed by Gui’s artist practice. What inspires him, what he references in his work, and how these relate to him as a person. Others were informed by his personal life, his identity, and his battle with depression and anxiety, which is what he is exploring with his art. Gui’s artistic and private personas are inseparable.

The initial concept evolved a lot during the process of shooting the film. We went about documenting Gui’s process from start to finish. His artistic practice centres on photography. He constructs elaborate sets from scratch out of his imagination. There is no real blueprint, he acts from instinct, but at the same time is very exacting and detailed.

Gui’s sets are quite cinematic. They’re like entire worlds. I wanted to get lost inside those worlds with a camera.

Practically speaking, this involved intermittent shoot days over a six month period – we shot on old Zeiss Standards, on a Sony FS7, and a Dana Dolly – where we would observe him and his work evolving, fly on the wall style. Gui’s sets are quite cinematic. They’re like entire worlds. I wanted to get lost inside those worlds with a camera. Likewise, I wanted to see his worlds from the perspective of his lens, his camera, then “stage” a reversal to create a sort of dialogue between our respective processes. 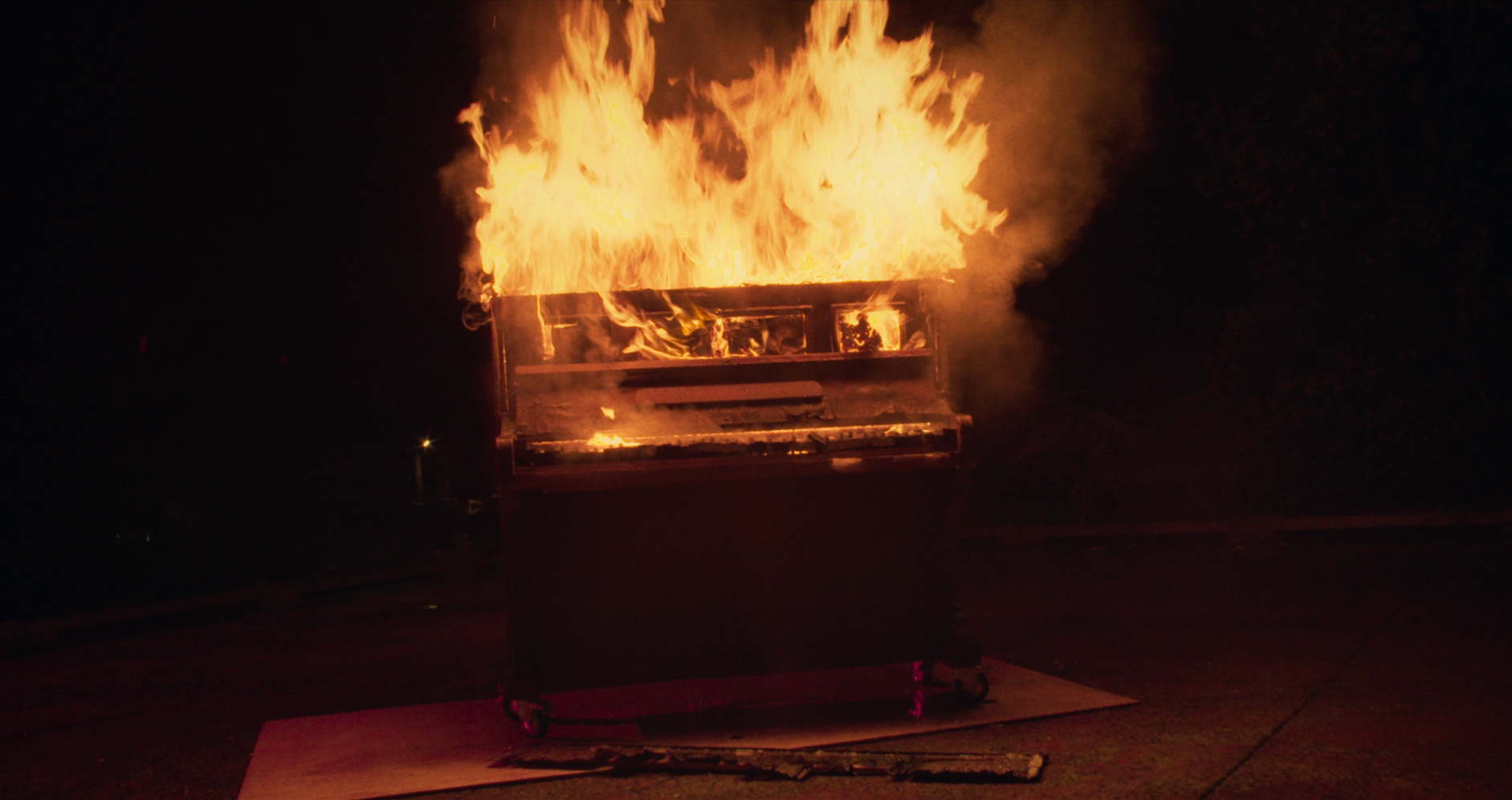 We also constructed different motifs to tie in with the documentary material. These function as a way of addressing theme and image specifically. But also elevate the emotive storytelling and help create associative connections that shape everything into a cinematic experience. Examples of this are the burning piano, the setups in the art gallery, and the public statues.

The narration was captured with a series of impromptu conversions, which we shot on a long lens, close up, with a shaky “anxious” handheld camera. Any gaps in the narration were later filled in with a very loose interview we did once we had an assembly edit.

I wanted to tell the story with pictures, adhere to the old rule of “show, don’t tell”. So we first cut the film without any narration and it worked well. We took a less is more approach to narration. Treating the material like a dada poem might, cutting it up, remixing it, only adding narration beats if they helped relate the image to something personal from Gui’s experience to give the film some emotive weight. I did not want to rely on narration to tell or guide the story. 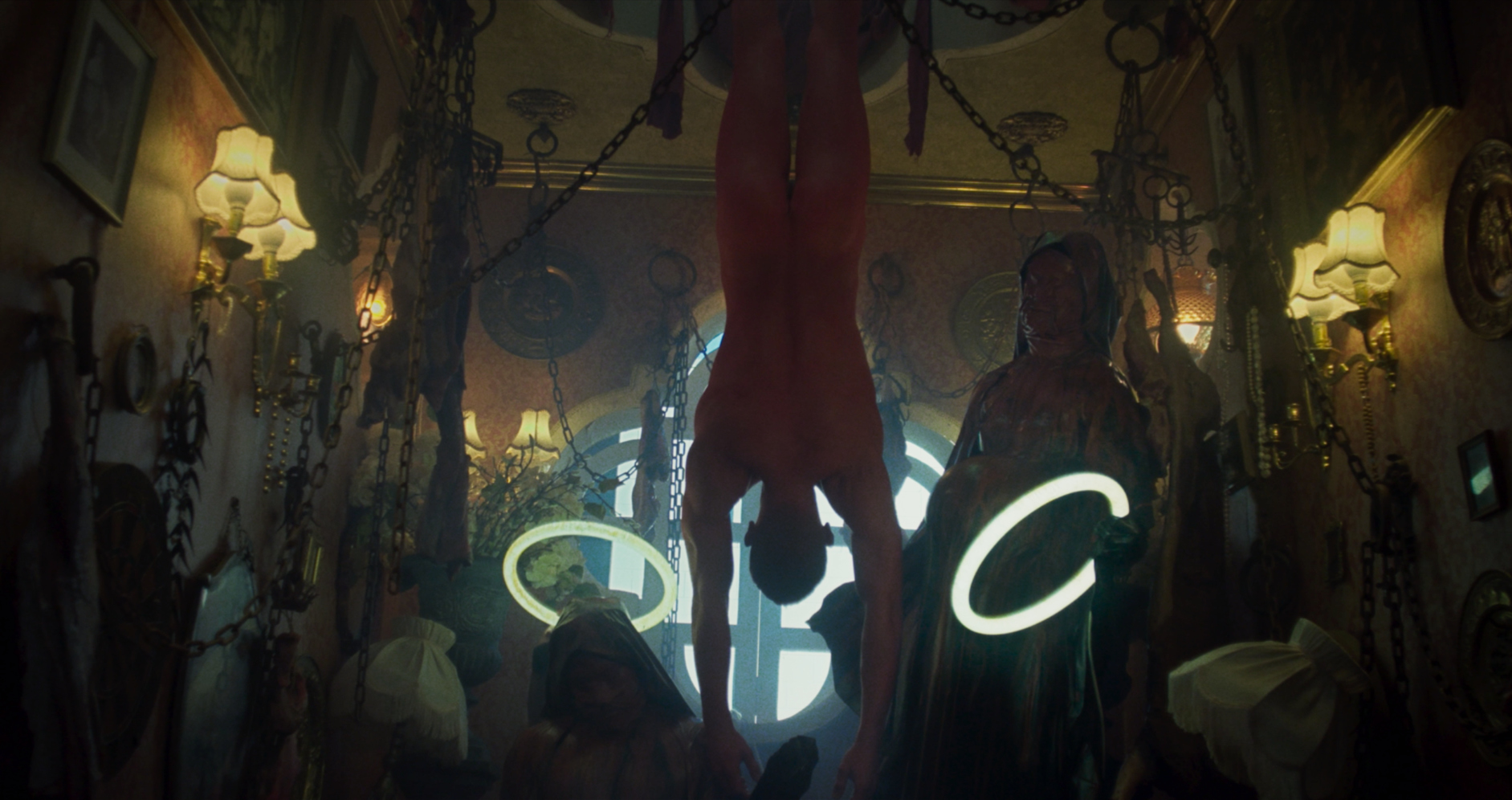 We also created the sound design in the edit. Our idea was that sound and image are so closely related that they need to work together to find the story. The story is told as much with sound as it is with pictures. The editor I worked with is a wizard. He would score the film and create different sounds with synths and samples as he cut. This process helped shape the film.

The story is told as much with sound as it is with pictures.

These sounds were later elevated, added-to and/or replaced in the sound design process. The way we treated voice in the prologue or opening sequence for example, figuratively associates being in the closet with an anonymous criminal testimony or hidden witness on a show like 60 minutes. It’s as if the character is hiding or needs to hide for some reason. It works to set up the story and gives us something to resolve in the end.

The overall shape of the film was realised by thinking of the story arc as a descent into the psyche of an artist, reemerging through his work. We also worked hard to humanise Gui as a character.

I presented Fauze Hassen, my editor, with a mountain of material. The story could have taken many different forms. I have to hand to him, I could not have realised this film without him. I also have to give massive kudos to my DoP Riki Reinfeld and colour grader Alana Cotton. They both worked hard to give the pictures an emotive quality unto their own. And Miller Yule, our sound designer, his work helped resolve film. I also want to thank Gui for inviting me into his circle, and Adrian for making this all happen. This film was a joy to make.