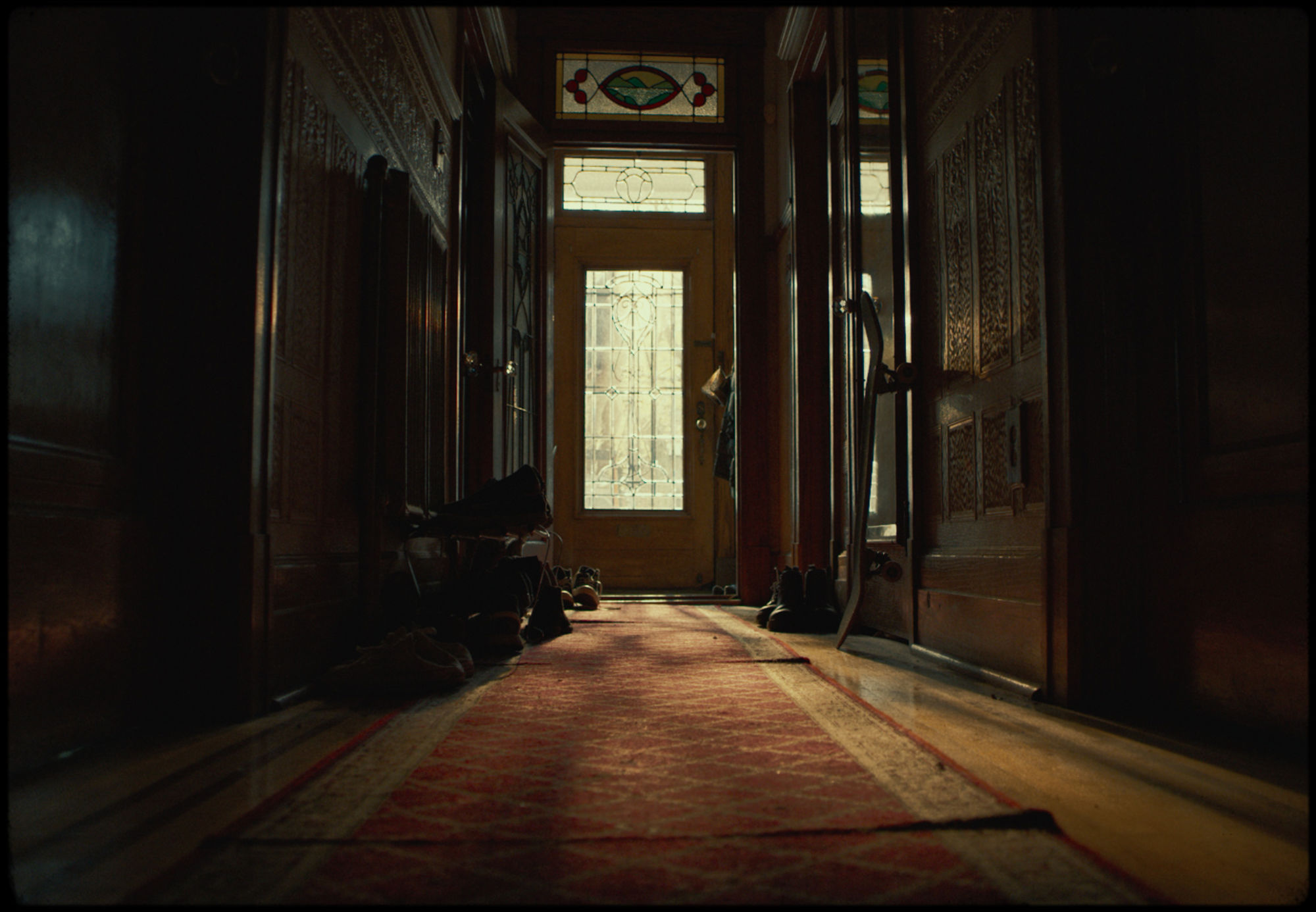 Although familiarity often blinds us to the fact, just a few days away is all it takes to remind us of the physical and emotional comforts of home. A beautifully evocative ode to the spaces we love and the ways in which that love manifests in the objects we chose to hold close, Luke Orlando’s nostalgic music video for SmilesWithTeeth reminds us exactly why there’s no place like home. Orlando joins us on DN to explain how the film came together in friends’ apartments and a freezing cold 30ft tunnel constructed out of paper and chicken-wire.

The concept for this video came from returning to Montreal, where I went to college, after living in LA for two years. I drove there with 3 friends and only planned on staying for two weeks but ended up staying for two months. I was pretty lost in work, love, and life in general, and that two months consisted of a lot of couch surfing and nostalgic self-reflection. I ended up spending the majority of that time living in my old house with my old roommates who I lived with for over 3 years. Living there as a guest allowed me to revisit and re-notice all the little details of the home that easily go unnoticed, but make it special and sentimental.

At some point on this trip, I committed to making a music video for my friend Gabo (SmilesWithTeeth). The title of the track was Love and I really had no desire to make a video about love between people, so I thought about it and I found myself drawn to making a video about love for the spaces we inhabit and the objects we fill those spaces with – a sort of meditation on the passage of time and nostalgia.

It’s inside that old house in Montreal house that I heard Gabo’s music for the first time and where my mind wanders when I hear his songs that so magically transport us to our individual nostalgic defaults. Leaving this house was bittersweet but overall cathartic – I was overwhelmed both with sadness at having to leave and absolute joy from having made so many happy memories in this space. This emotional journey – from sentiment to catharsis – is the feeling I want to capture in this video.

Getting into the nitty-gritty of it, I saw the song as having two parts: pre-drums and post-drums. The first half is completely atmospheric and contemplative, while the second half indulges in a drum solo: it’s almost as if the first half is spent daydreaming, and then that dream gets realized when the drums come in. I wanted the first half of the song to be really slow, focusing purely on the nostalgic details of “home” and featuring static shots of empty rooms that slowly fill with light that illuminate objects attached to an ambiguous-yet-sentimental effect. I wanted it to feel relatively grounded in reality but have a slight tinge of magical realism, and I think we achieved that through our use of filling regular spaces with fantastic/surreal light.

I found myself drawn to making a video about love for the spaces we inhabit and the objects we fill those spaces with.

I then wanted the second half of the song to feature the drum solo while transporting us to an overtly surreal “memory tunnel” – piles and piles of boxes, flowers, and other memorabilia seen in the first half of the video are arranged in a romantic exaggeration of the move-out process. The idea for the long pull-out in the “cave” or “tunnel” of memories stemmed from a combination of references:

The first was Hiro Murai’s Canal180 video for Mac Demarco. I just really love how halfway through the video it randomly cuts to Mac playing the drums in a way that isn’t really hinted at or connected to the rest of the video. It’s really surprising and I think ever since I saw this video I always wanted to make something that randomly cuts to a guy doing a drum solo. The tonality is obviously very different, but this was the seed that resulted in the rest of the idea coming to fruition.

The second was a video I helped make as a part of OMG, a non-profit I run that teaches kids how to make music videos. We made a video for Cailin Russo that featured her performing in a super DIY tunnel that we made out of c-stands and curtains. I thought the effect was genius for being so simple and thought it could be cool to create something similar on a larger scale.

I pitched the concept to Gabo and my old roommate, Ben Soussan, who owns and operates the Montreal production company Niveau 2. We were all pretty into it and each contributed funds to make it happen. But despite our collective financial efforts, the video is still the direct result of favor after favor from really good friends.

Where to begin!? Ben produced the video and got us an incredible crew, amazing gear, and helped organize all my crazy thoughts into an executable plan. Jonathan Brisebois, a fantastic cinematographer, came on board and brought his RED for free. Harley Francis, my favorite gaffer, brought his lights and creative expertise to the game and ended up making some of the most beautiful moving light I’ve ever seen in a video. Erika Loyola Andrade, an old friend from college, took a train up from Toronto to production design the video – we found ourselves in Goodwills, hardware stores, and prop houses until the dead of night before our shoot days. Overall, I’m still kind of shocked that people were so down to help bring this vision to life.

While I originally saw the entire video taking place in my old apartment, in the week or so before we shot I found myself noticing incredibly striking details in my close friends’ apartments – such as the dog portrait above the sink or the flower pot in the bathtub. These little pieces of their apartments were so perfect for the video that I realized if we shot in these locations we 1) wouldn’t have to decorate a set and 2) would have more meaning packed into each frame than if we just put some random object on a wall. So after some discussion, three friends let me and a whole crew into their apartments for hours at a time to do all this crazy lighting and shoot their personal memorabilia. It was beautiful.

The biggest struggle of production was obviously the tunnel. It starts in what was actually my old bedroom, which has a window that opens up to a backyard – a perfect place for the build, but we didn’t factor in that it was November and freezing in Montreal. Despite tons of planning on my and Erika’s end, we didn’t fully know what we were getting into and what was supposed to be a four-hour build took twelve hours and all hands on deck. I don’t even 100% remember how we pulled it off, but I can tell you it took an insane amount of PVC, chicken wire, tape, and black paper. So many fingers froze that day! My good friend Hakan (a great photographer, sculptor, designer, and electrician) showed up in our darkest hour and not only helped up finish the tunnel but also had the brilliant idea of wiring a bunch of lights to be hanging randomly throughout the tunnel. Harley then wired each of those lights to a dimmer and pulsed them to the beat of the song.

I had about 6 hours of footage that I absolutely loved, and the idea of cutting it down to 2.5 minutes felt impossible.

It was crazy to pull that final shot off because, after 12 hours of building, we got the shot in about 10 minutes, and then immediately tore everything down. The tunnel truly existed only long enough for us to get one usable take, and that’s what we see in the video.

Interestingly, the drummer in the video is actually just Ben’s friend Oliver, who showed up when the drummer who actually plays on the track couldn’t make it.

I’m a notoriously slow editor and lament the fact that despite telling Gabo and Ben that I’d be done the edit in about a month, that it actually took me a year to finish the piece. I had about two rounds of editing that took about 4 months each – but the reality is that I had 3 or 4 days where I’d spend 18 hours straight editing and that’s how the bulk of it got done. Most of the time during post was spent shooting other projects and letting myself get distracted instead of making crucial edit decisions. I had about 6 hours of footage that I absolutely loved, and the idea of cutting it down to 2.5 minutes felt impossible. I don’t think I really hunkered down to finish the piece until my roommates and girlfriend insisted that I was sitting on something cool and was silly to not just put it out.

My good friends Tim Hendrix and Dan Frantz came in to help with some essential but (hopefully) unnoticeable VFX, and then Jacob McKee came in at the very end to color the video, which he did brilliantly.