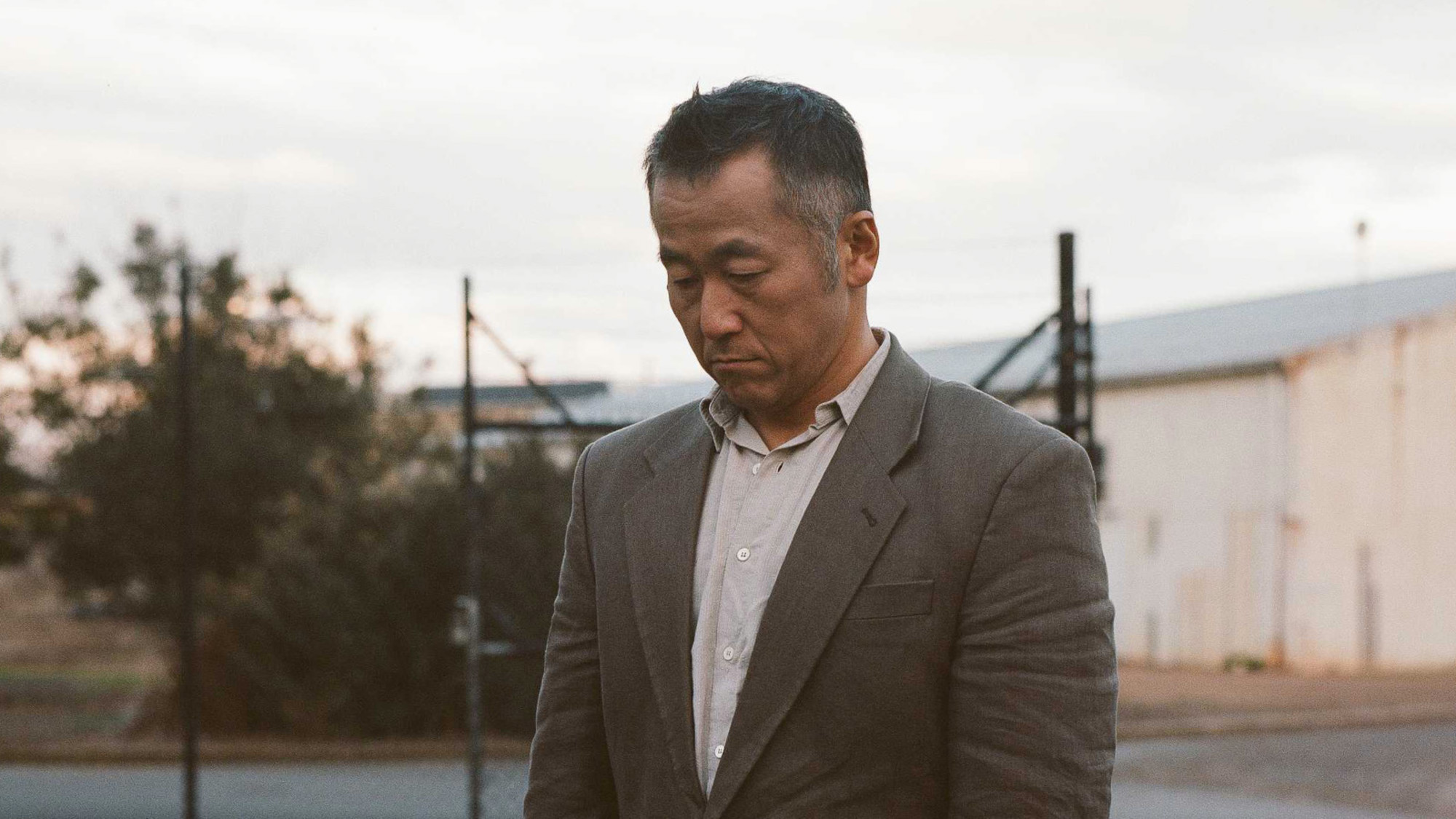 A musing on one man’s evolving reaction to an unexpected period of transition, Cinematographer/Director Gabriel Francis’ Victorian College of the Arts grad short Perisher takes a dryly comedic look at those disconcerting feelings of paralysis which can take hold of us during periods of sudden change. Featuring an impressively deadpan central performance from Shingo Usami, Francis reveals how the Japanese actor’s ability for subtle expression through body language and atypically muted Australian weather were boons to the production.

With Perisher I wanted to try and make a film about a feeling rather than a central conflict and resolution. Originally the story was much more about two parallel stories of people going through a time of growth and change and the different ways we deal with the unknown. Given that it is a short film I ended up focusing more on Takeshi’s (played by Shingo Usami) story, although there are still mirrors of what is going on for him in the other characters.

There are many ways we construct control and stability in our lives; career, family, friends and routine are just some. These all begin to break down for Takeshi and he’s left trying to work out who he is and where he’s going. To me, Perisher is a bit of a slapstick comedy disguised in a very different style of cinema language.

I wanted to try and make a film about a feeling rather than a central conflict and resolution.

Takeshi is constantly being knocked about by life because his sense of self has been thrown off. He leaves his keys in his car, then a box on his car roof when he drives home. His dinner starts burning while he tries to speak to his sister on the phone and he can barely hear her over her kids playing in the background. I wanted to show an exaggerated and slightly comical version of the times when you feel like everything is going wrong and you’re getting swept under by the tide. Then how you can just as quickly come out the other side of that storm, not necessarily with any solutions but with the energy to begin moving forward again.

Perisher was my graduate film from the Victorian College of the Arts in Melbourne, Australia so we had quite a bit of scheduled script development within the course structure. Once pre production properly began I believe we had around two months before shooting as well as other course work to do during this period. The film was shot predominantly over fours days as well as a couple of nights in which myself and Director of Photography Thom Neal drove around to get cutaways like the factory shots and houses. 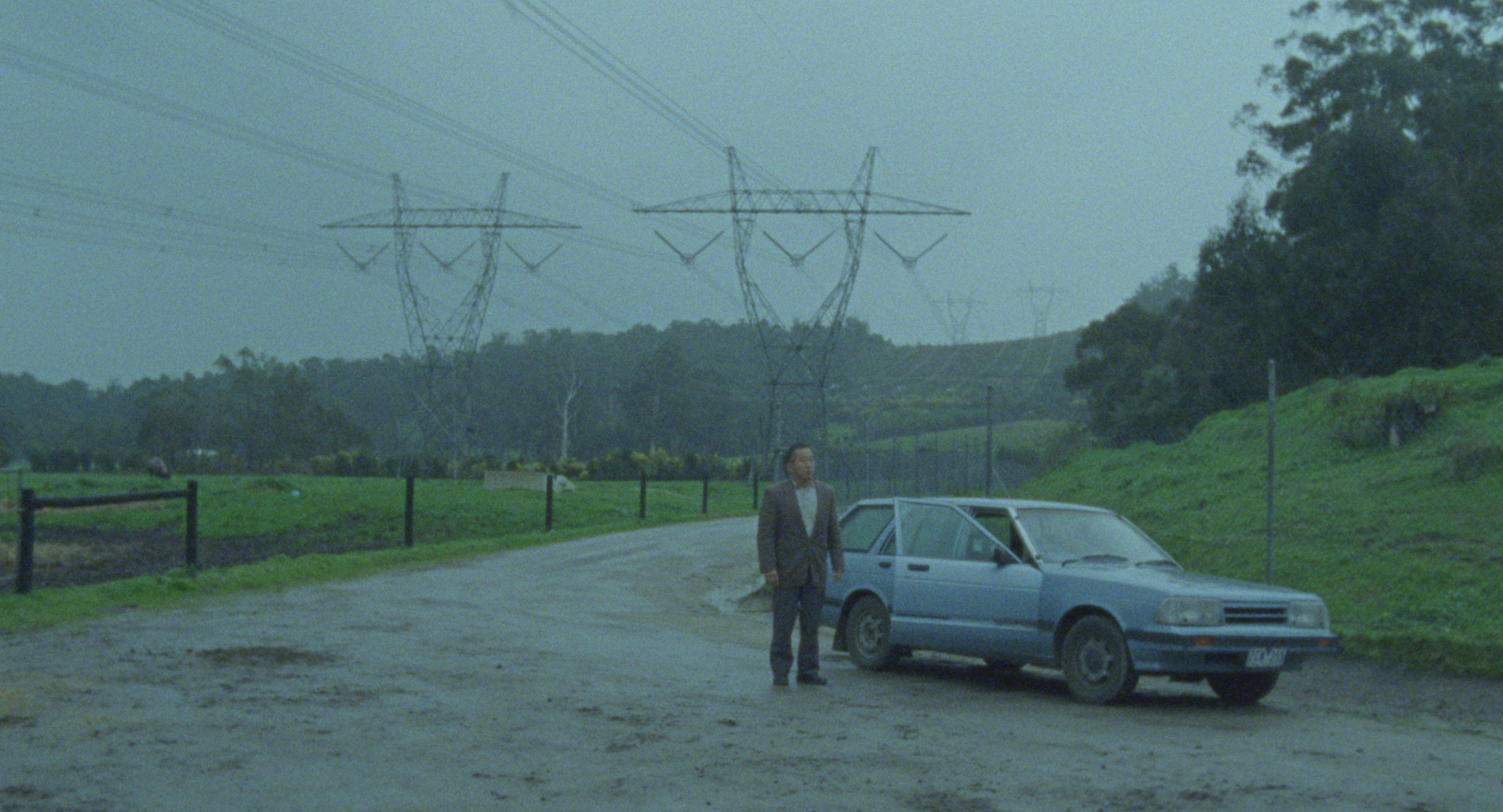 Production Designer Ranima Montes and I spoke about the film feeling dated and not quite of this time. It felt right for the story and places the audience in a world that feels familiar but a bit nostalgic. You are being told a story and I wanted to move away from anything too naturalistic.

Finding locations that had the right look with a limited budget and timeline was one of the most challenging elements in preproduction. The furthest location was just over an hour from Melbourne in Labertouche for the horse shots and the end of the film. The majority of exteriors were shot in Werribee and Seddon for the industrial landscapes. Interior locations were filmed around Melbourne’s inner suburbs with Takeshi’s house doubling as Shingo’s accommodation while he was in Melbourne to shoot the film.

To me Perisher is a bit of a slapstick comedy disguised in a very different style of cinema language.

The film was shot on 16mm film using an Arri SR3 and Zeiss Super Speeds. From memory we shot mostly 200T and 500T with no 85 filter. We pulled some of the blue back in the colour grade but the tungsten balanced stock is what gave the film its blue cast. The coldness this lent to the images complemented the production design palette and we were lucky enough to have overcast weather for exteriors shooting in Melbourne winter. A grey winter felt like the right setting for how Takeshi is feeling. The rain in the scene with the horse was a happy accident. It made the location very muddy and did cause some continuity issues but I like what it adds to that moment in the film.

The process of shooting on 16mm influenced the film in many ways. It helped me be very organised in pre production as we needed to know the coverage and shot times for each scene to work out how much stock to buy and budget for. This meant a lot of visualising and timing the shots in pre-production that benefited the film in many unexpected ways. It also demanded more focus on the performances and blocking of a scene before the camera rolled as we had a limited number of takes.

Werner Winkleman at Neglab in Sydney did a great job of processing the negatives before sending them on to Park Road in New Zealand for scanning. This whole process took a few weeks and ended up shortening the time we had for editing slightly but allowed me to step away from the film for a bit and come to the edit slightly less exhausted.

The process of shooting on 16mm influenced the film in many ways.

One of the highlights of working on this project was seeing what Shingo Usami brought to the lead role and added to the character I had written. I felt Shingo was very naturally able to express a lot in his body language and posture. While the other characters very literally voice how they’re feeling, Takeshi is avoiding his emotions and it shows instead in his physicality. This is why a purely cathartic ending felt right for the story. To move on Takeshi first has to get his body moving again.

I had been watching a lot of films by Finnish director Aki Kaurismaki at the time and wanted to experiment with a similar deadpan style of performance. When the character is saying everything with a similar level of emotion despite the situation, it’s a kind of trick. As an audience, you’re encouraged to project what you imagine these deadpan characters might be feeling. I also find a lot of humour in the melancholy and awkwardness of people trying to navigate relationships with each other.

We shot the last shot of the film at the end of a cold and very wet day in Labertouche. After we cut I wasn’t sure if Shingo had heard because he was gone behind the hill for a while. Eventually, he appeared over the crest and as he ran back a horse appeared behind him. Then another and another. By the time he got back to us at the fence, there were ten or so horses trotting after him in a line. The horses all piled up behind him and then looked around like “why are we following this guy?” The whole crew was laughing and it was such a nice surprise moment at the end of a long day.

Blackwood (Dir Kalu Oji) a short that premiered at Atlanta Film Festival and went on to screen at BFI London and picked up a Best Cinematography award at Flickerfest 2020. Blackwood will be available to view online once it has completed its festival screenings. You can stay up to date with the film on the Blackwood Instagram.

Director Kalu Oji and I have also just completed shooting his next short film titled The Moon & Me about a young girl coming to terms with changes in her life set against the backdrop of a strange lunar phenomenon.