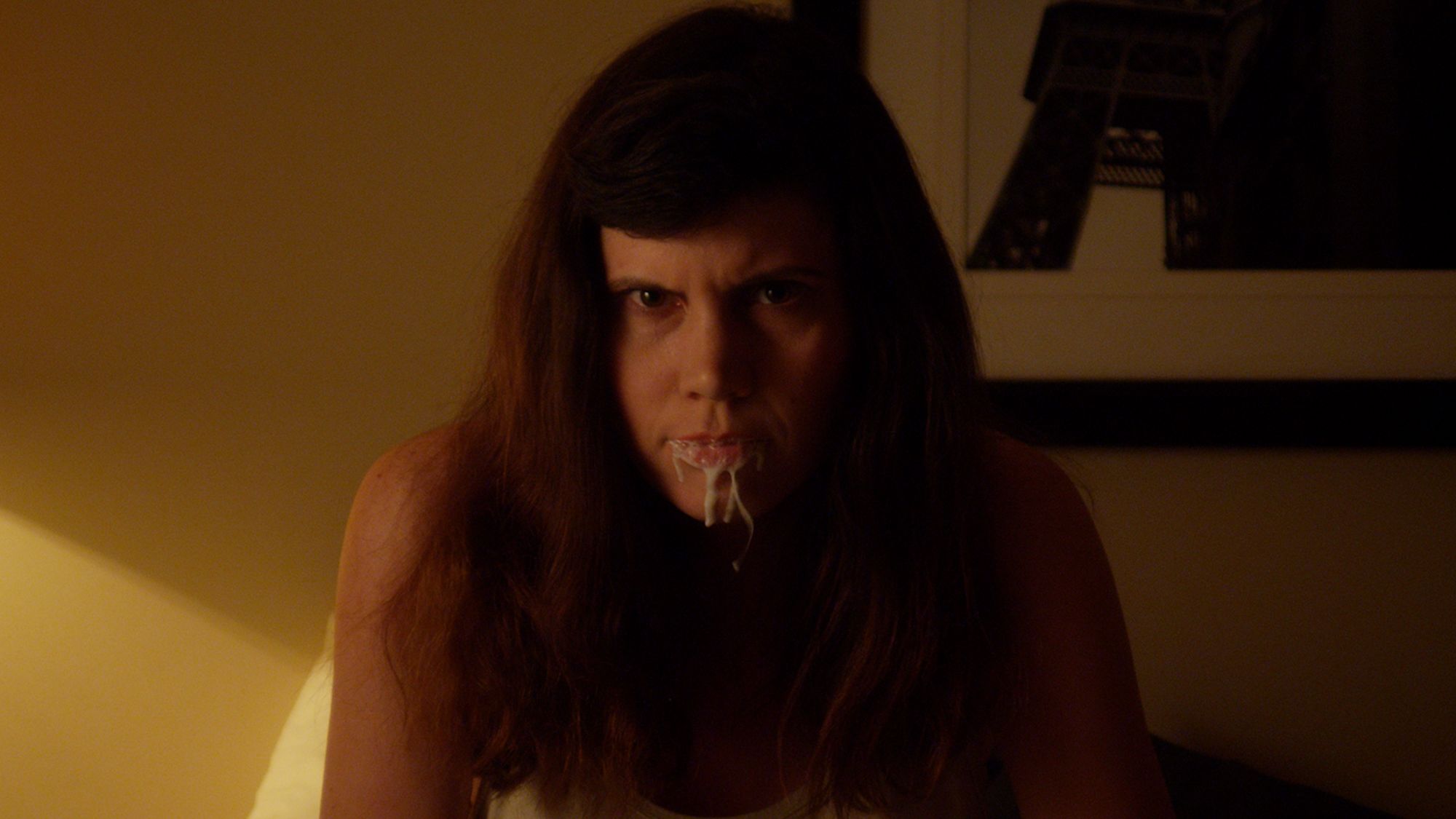 We invest a hell of a lot into our long term friendships. So much in fact, that it can be hard to walk away from them when they turn from good to bad. That’s the quandary facing Jenny in Christopher Good’s wonderfully weird short Crude Oil – that and finding a use for the less than awe-inspiring super power she’s been keeping secret. A rip-roaring comedy not bound by stylistic or narrative conventions, Good takes us through Crude Oil’s hybrid genesis and explains how he packed so much detail into its 15 minute running time.

Several years ago I’d written a short script that focused entirely on someone who possessed the power to make people smell things. It was called Olfacts. At one point in the script, the character makes former Supreme Court Justice Sandra Day O’Connor smell cinnamon rolls and subsequently receives a visit from federal agents. She thinks they’re there to recruit her, that they’d be keen to have someone with this smell power in their ranks. To her dismay they find her superpower relatively useless, they just don’t want her running around making former Supreme Court justices smell things. So she has to return to her vanilla and unfulfilling life.

Shockingly I ended up shelving this script. Then a few years later I got interested in writing something about a controlling friendship. Initially, I thought it could be a little like Scorsese’s adaptation of The Age of Innocence, although I can’t entirely remember why, and probably most of that influence eventually fell by the wayside or at least is warped beyond recognition. But at some point, I got the idea to combine this story of a toxic friendship with the smell power concept, and once I put those elements together the script was quick and easy to write. 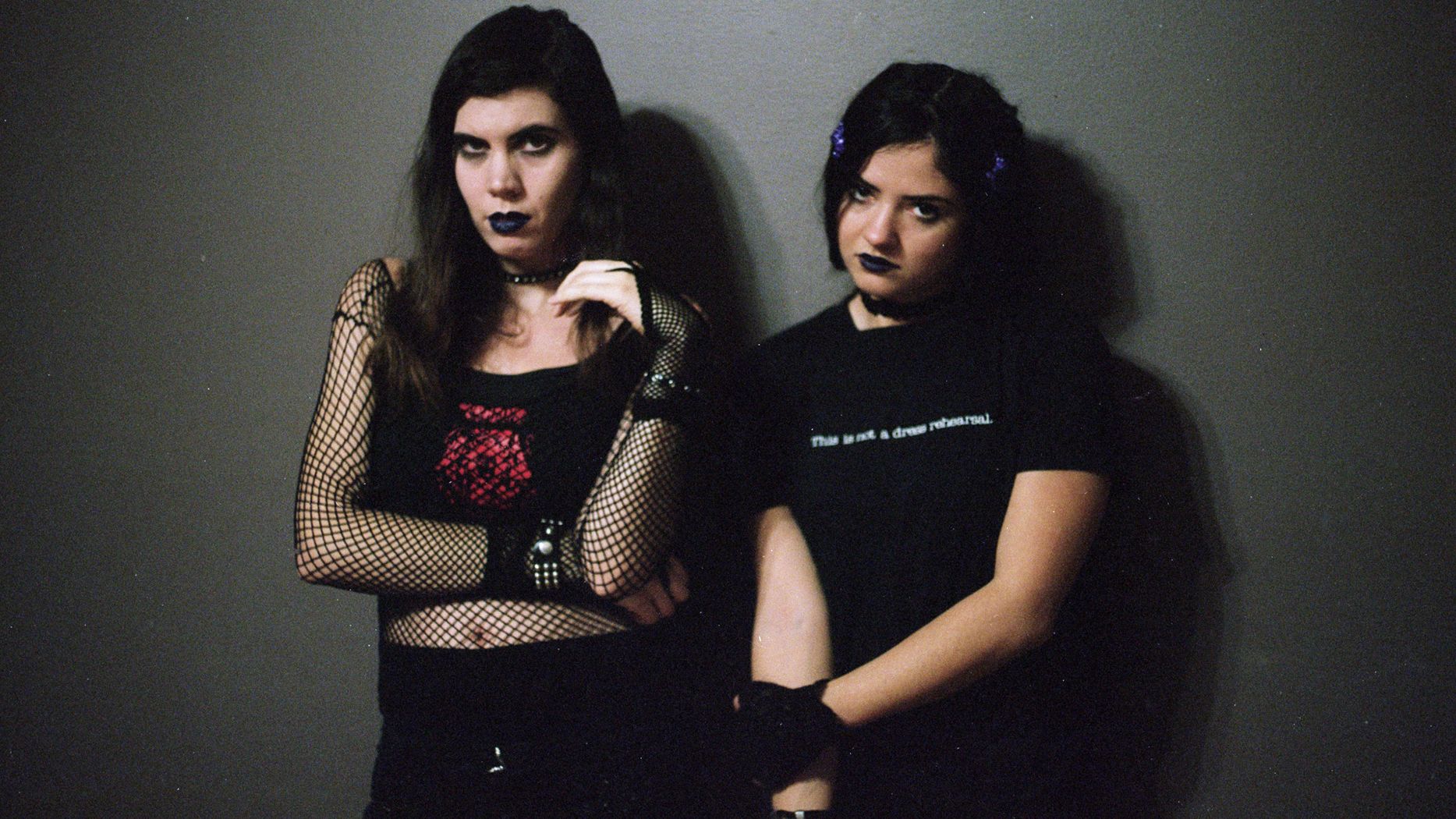 The title came from a different scrapped short script. I guess I just liked it and wanted to name a film Crude Oil. You know, I remember Stephen Malkmus from Pavement saying that two-word titles work really well – Wowee Zowee, Pig Lib, et al., and I can’t argue with that. At some point, though, I did sort of come up with an ad hoc justification for it: Crude Oil connotes something deep, raw, buried, and unrefined, words which perhaps also describe the feelings Jenny experiences in the film as well as her odd hidden talent. Anyway, that’s what I told people when they questioned me at film festivals.

The feeling when you finally nail a shot and grab a pen and cross that shot out on the storyboards, man is that satisfying.

I don’t remember too much about pre-production. It could be the case that we didn’t really bother having any meetings? If that’s true I’m sure it’s because the group of people who made Crude Oil, we’ve all worked together many times before and since on music videos and also on an earlier short film called Brad Cuts Loose. So we have a shorthand. I can’t remember if I storyboarded any of it, either. I probably did because the feeling when you finally nail a shot and grab a pen and cross that shot out on the storyboards, man is that satisfying.

We had a small crew – it was me, our Producer/star Andreina Byrne, Cinematographer Jeremy Osbern, sound mixer Danny Bowersox, Production Designer Sinjun Strom, Stylist Sarica Douglas, and Production Assistant Ryan Bowersox. For some of the shoots, it was even smaller. But we kind of like that; certainly for me it’s comfier. And I love dolly gripping.

One thing about post: I was putting the film together and I wasn’t exactly sure what to do about Jenny’s smell power. The way it initially was, she just kind of looked really intense and then the person supposedly smelled something. It wasn’t too effective. So I took those shots of Jenny and printed them out as color copies, frame by frame. Then I took those copies and cut out Jenny from each one, and then filmed those cut-out Jenny figures frame by frame against a green screen, and then overlaid them against the original shots. It’s a super time-consuming method but it did the trick- it gave it enough of a spark and then once Danny added in those sound effects it got cookin’ pretty good.

There’s an early scene that takes place in the past and we shot that on Kodak Vision3 500T/7219 Super 16mm film. I know shooting a flashback on film is probably cliched, but what can I say? I’m sure I just wanted an excuse to shoot part of the short on film. And it was really fun! 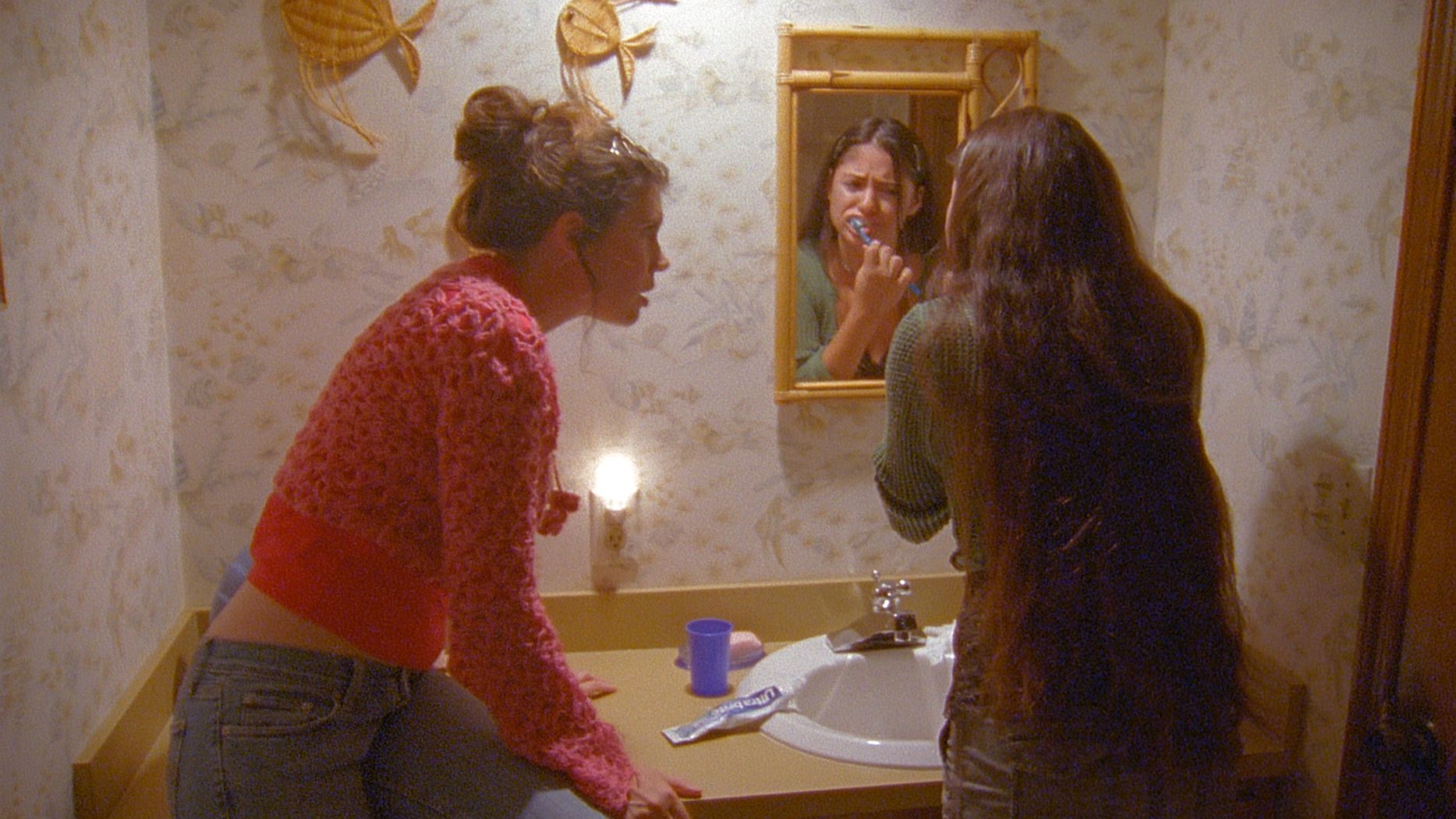 Most of Crude Oil was shot on Jeremy’s RED Epic Dragon in 5K anamorphic, with his set of Russian Lomo anamorphic lenses. I also incorporated some 35mm still photography here and there, and those were taken by Sinjun and I. When we were on a dolly (which was often) it was a Premier Studio Equipment PD-1 and then a Dana Dolly for the smaller stuff.

I edited it all in Adobe Premiere, and then Stephen Deaver finished the film in 4K using DaVinci Resolve 15.

Our first shoot was for five days in October of 2017. Tipper Newton and Josh Fadem came out to Kansas City for that. And then I think we shot some days in November, and then Tipper came back for a couple days that January. Following that we would do days here and there. At that point a lot of times it might just be me, Andreina, and Jeremy, just picking up whatever moments we needed; there are so many little inserts and things. I mean it’s like 40 scenes in a 15-minute film. But we were able to take our time, it would just be like whenever we could get everyone together between music videos and other shoots. 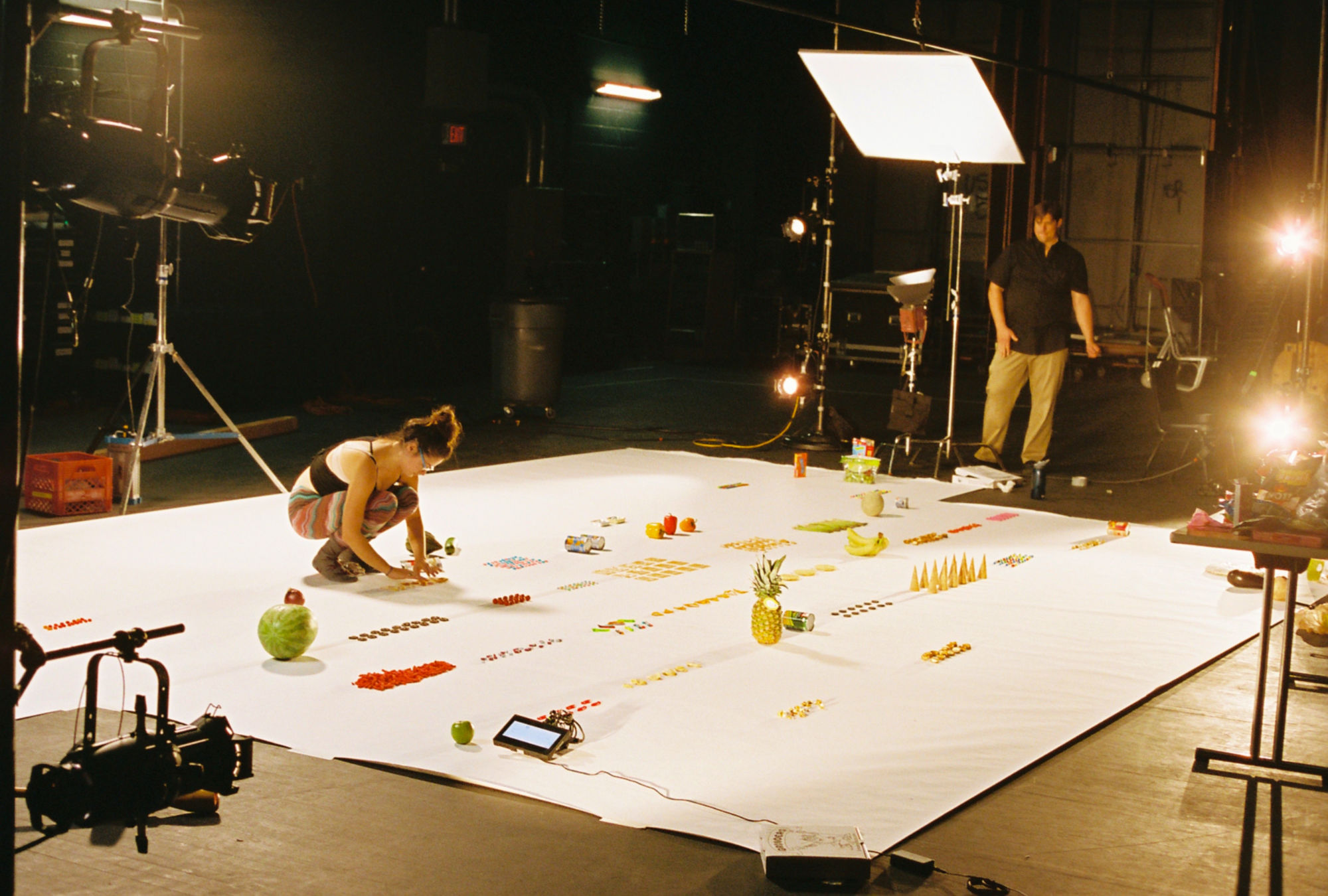 Some scenes that you see for literally five or ten seconds in the movie, it’d be all day just to get those alone. Like there’s a part where Jenny talks about wanting to become a food blogger, and we see her walking around this floor full of food, and then the camera booms up into the air. That definitely ended up being all we shot that day. Or another time, Andreina had to sit in a chair and have marshmallows adhered to her body for hours and hours and hours. That’s the thing about Andreina, she’s such a trooper and probably the hardest-working person I’ve ever met in my entire life. She’s incredible.