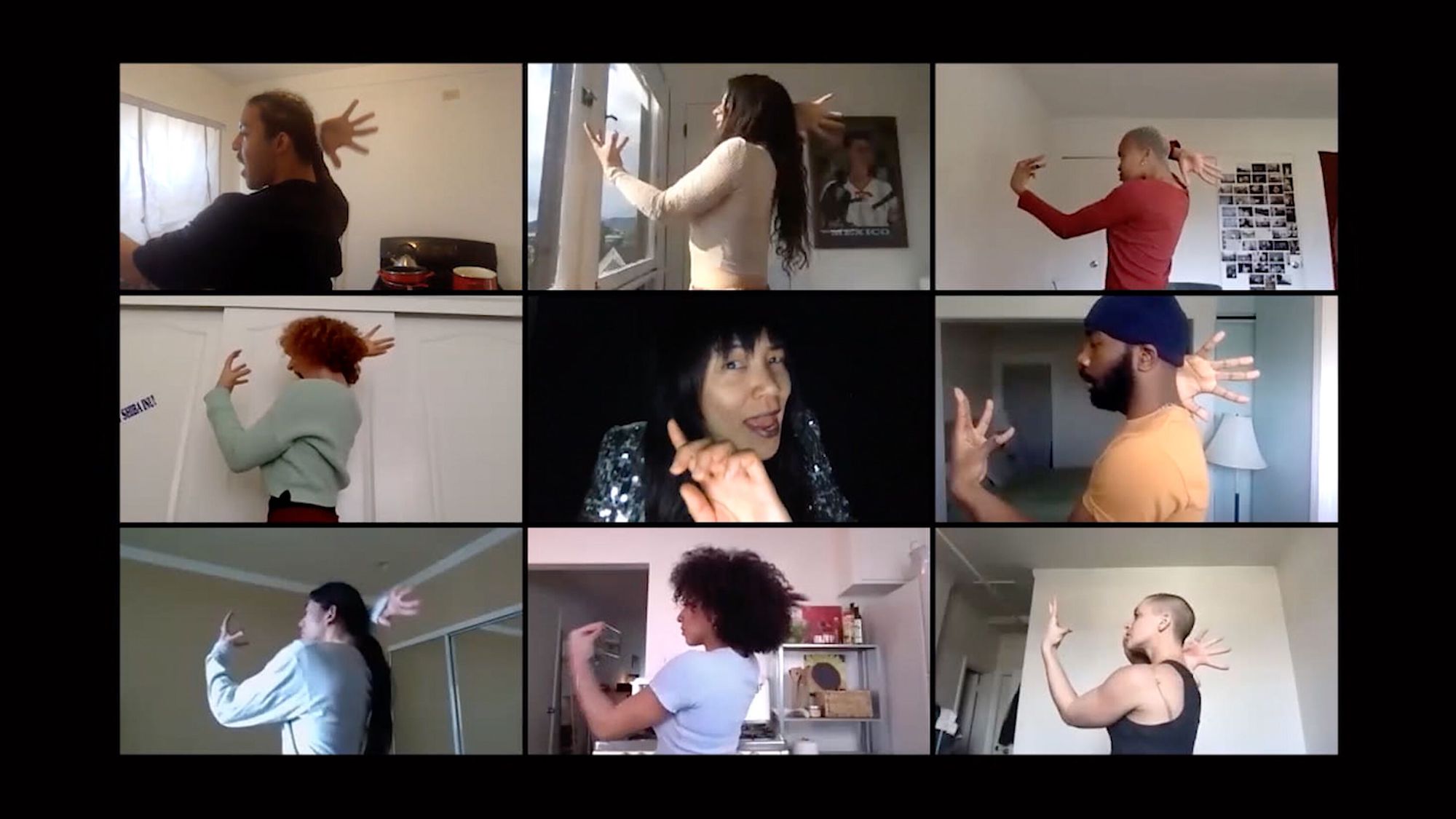 Where some people see despair, others see an opportunity. When the physical shoot for Thao & The Get Down’s Phenom music video was cancelled due to the coronavirus, it was quickly converted by her manager into a virtual affair. The result is a unique use of the Zoom platform to create a dynamic and fluid work of art that perfectly captures the zeitgeist of the lockout. We talked to director and choreographer Erin S Murray (last seen on DN here) about the challenges of shooting a film over Zoom, the possibilities of the form and the video’s timely relevance.

When did you find out the original shoot was cancelled?

It was about five days before we were about to shoot. It was the label’s decision. But I was calling the producer every day as things were looking very precarious. I started to feel like I was going to have to change the movement to feel ethical about it because I really didn’t want to have dancers on top of each other. The week before I worked on a commercial project with 50 extras. We were all shoved into a small space and everyone was so paranoid, it just didn’t feel good. So I thought cancelling the shoot was the right decision.

How did the Zoom idea come about?

The suggestion to do it on Zoom came from the artist’s manager. I had to take a minute because doing a video on there could look very cute very easily. I just walked my dogs before I realised that I could pull this off.

From green-light to shooting, there were only three days.

How much did you have to alter the choreography to fit within a Zoom format?

The inspiration was the same, but I tried to augment the choreography in ways that could work in the grid. But there weren’t that many things that worked to be honest, because I wanted the movement to feel like it was made for the grid, and not something already done that we just happened to film on a webcam. Additionally, I wanted it to be relatable enough that anyone could get on a zoom with friends and create this. And I definitely wanted to capture this sense of mania in the performance. 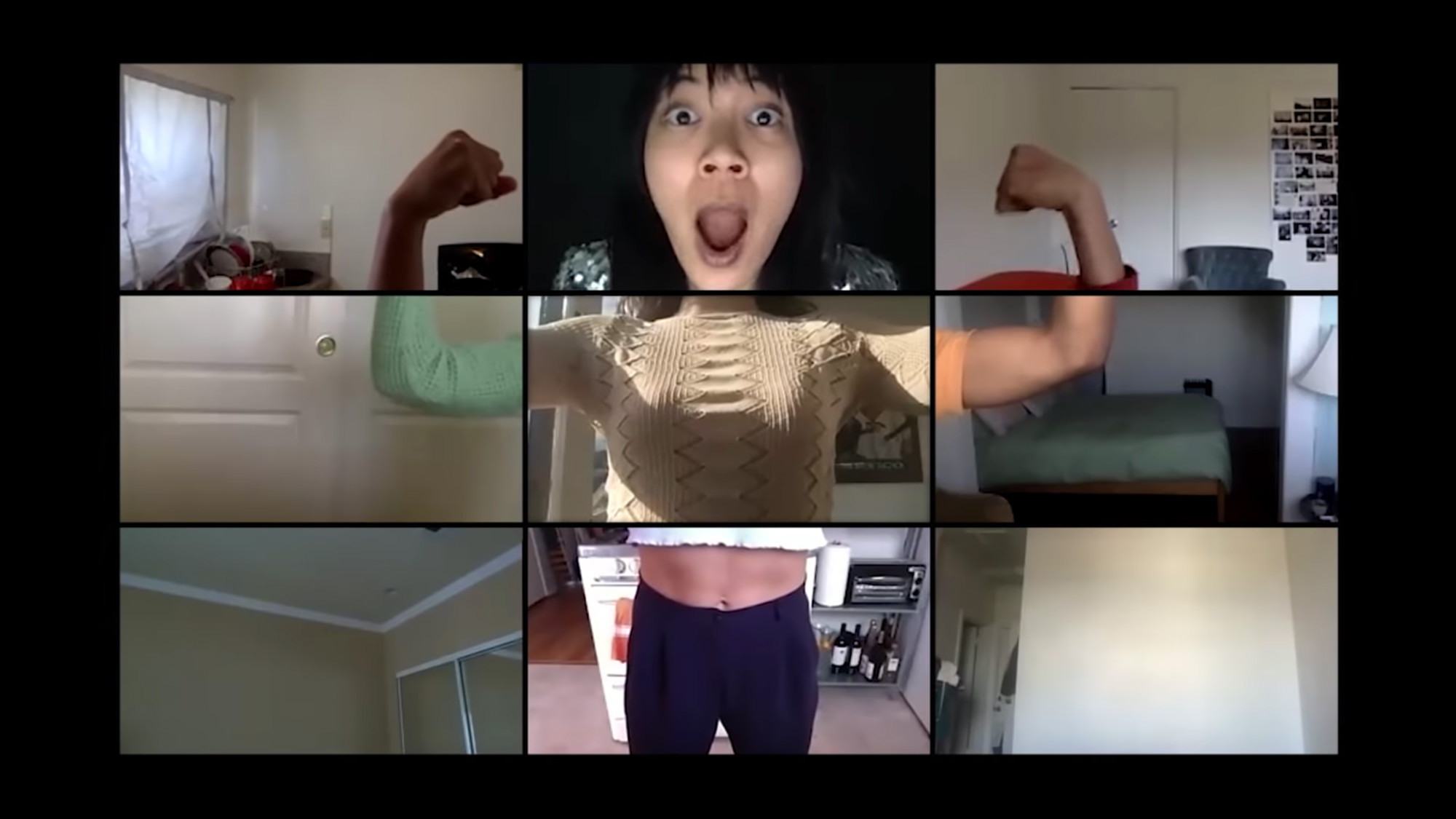 It was fun! It took me a couple of days to figure out. From green-light to shooting, there were only three days, so I pretty much spent three days in a room alone, recording myself on my webcam then putting it in the grid to test what was going to work. I never worked in this way before! And it was a big challenge in rehearsal because when there are nine people in Zoom, you always see yourself in the upper middle. So every dancer saw a different screen. Usually, dancers are in the same space so they can intuitively understand what’s going on as you’re teaching the movement. But they couldn’t even see the full picture of what they were building together! So it was challenging to communicate that. It took a long time: we spent about six hours calling out everyone’s name and explaining what their timing was.

What’s it like rehearsing through a virtual platform? Is it more tiring than usual?

It was funny because I felt just as drained as I would on shoot days when I’m running around on set because communication took so much energy. But I think everything went really smoothly considering the circumstances. I’m super impressed with how quickly and how focused everybody was. I think people were very excited about what we were doing. Thao was at the entire rehearsal, which doesn’t usually happen. Then when we did our first run through, it definitely wasn’t great, but I could tell it was going to work! 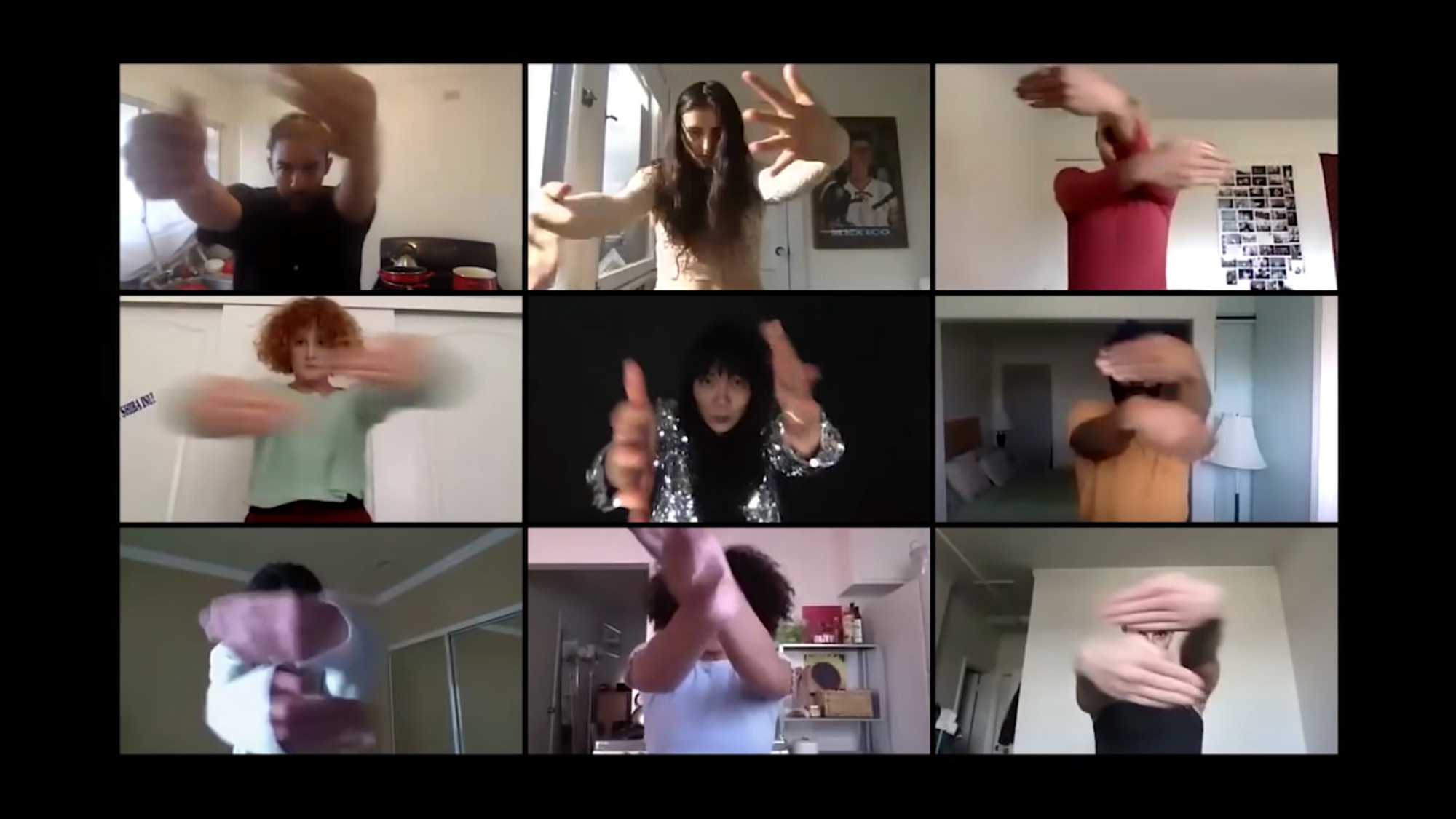 How hard was it to get everyone to sync up at the same time?

This song is very political and feels more relevant now than ever.

Was it all one continuous take or did you stitch together multiple takes?

I’m pretty sure it’s one continuous take. We filmed it like six times, but I think the last two were really good. Jeremy, our co-director, did the post work, and I think he mostly used all of the last take.

The lyrics are a passionate a description of people at the bottom having enough and rising up. Do you think it has a timely relevance?

For sure: this song is very political and feels more relevant now than ever. When I got the opportunity to pitch on the track I was so excited because it’s really awesome to work on a music video where you actually believe in the message and love the music. For the movement, I tried to take as much inspiration from these themes — the idea of people coming together against injustice and oppression, while trying to reference nature, coming back and reclaiming power against man! Thao didn’t talk much about the themes of the lyrics, but she does say the song is about Mother Nature. When she told me that, it kind of changed things.

These are difficult and testing times. Do you hope the film provides inspiration, especially for filmmakers spinning their wheels at home?

I think so. I want it to be cathartic for people. And if they are inspired to make their own creative work from it, that’s awesome too!

I hear you are also live streaming ballet lessons during the lockdown. Can you tell us more about that?

I taught my first live stream dance class on Instagram after a week of self-isolating. At first, it was a way to occupy myself and to stay physically active, but there has been such an awesome response, I’ve kept up with classes two months later. I would have never imagined myself doing a live stream class on Instagram prior to COVID, but it’s been an incredibly rewarding, even social experience.

It’s made me think a lot about accessibility in the dance world. I’ve received many messages from people telling me that they’ve always wanted to learn ballet but are too intimidated to go to a dance class in person, so the live stream class, dancing in the privacy of their own home, has been their gateway into ballet. It takes complete focus to do a ballet barre correctly, so it’s been a great escape from what’s going on in the world. Think about how to do a tendu for 45 minutes instead of what you read in the news this morning.