In what is fast becoming the new normal for film productions ramping up in a covid world, social distancing rules have stopped the typically close quarters interactions between cast and crew dead in their tracks. A particular challenge for Lisbon-based filmmaker Diana Antunes who was tasked to create dance film Desabitar for Canal 180. Inspired by the memories she inadvertently rediscovered during lockdown, DN invited Antunes to walk us through the practicalities of directing a distanced cast and crew production.

How did this project come into being and what was it about the nature of memory and its connection to place that you wanted to convey?

This project appeared at the invitation of Canal 180, a Portuguese television channel, as part of the celebration of its 9 years of existence. Since the anniversary of the channel coincides with Freedom Day, April 25, the day that marks the end of the Estado Novo regime, as well as the period of total confinement due to Covid-19, it led to Canal 180 challenging 10 directors to create a visual piece on the theme “Freedom”.

We found ourselves confined to a space and the memories that inhabit it.

The idea of Desabitar (to uninhabit) appeared during the phase of isolation, a time when habits were re-learnt and personal freedoms were given up in favour of a general good. We found ourselves confined to a space and the memories that inhabit it, opening drawers and finding memories. I found myself wondering if the rest of the world was also “opening the drawers” and remembering the past. Is it possible for a space, a drawer, a ticket to hold pieces from the past? With these questions in mind, I opened the book and started to write about the experience of searching “drawers and objects” in search of memories. A few days later I was closing the script Desabitar, a reflection of the time I lived confined in a “space” and how that space keeps part of my history. Will we be forever held hostage by those same memories, or can we learn to move independently from them?

Could you tell us more about your production process?

The creation and production process was extremely fast. The challenge was launched at the beginning of April, which limited the process to two and a half weeks, one week of concept/script construction and a week and a half of production. The film was shot during one morning, in order to take advantage of natural light. We shot with a Sony FS7 and Zeiss Standard Speed lenses. The post-production process was also extremely fast. The editing was completed in two days and the grading in one night.

How did the need to comply with distancing safety rules alter things on set and what practical steps did that force you to implement?

The pandemic severely limited the whole production process. I am a very physical person, I like to be able to look other people in the eye and so working in a virtual way ends up distorting the entire production process for me, making it colder.

Adaptation to this type of production started immediately. The production time was very tight and the fact that the crew could not be physically together and solve problems using traditional methods ultimately created obstacles and delays. Finding two dancers that were already in contact during the pandemic was the first challenge, then the rehearsals. Furthermore, working on a piece, movements, realizing what works or not, all by video call, is a challenge.

The team was reduced to what I felt was absolutely essential for film making. Wardrobe and hair and makeup were the first sectors that had to go for security reasons, (relying instead on the cosmetic skills of the dancer herself). In order to avoid being close to another person location choice was also influenced by security in filming, that is, the initial idea was to find a “house/apartment”, but because the distance between team members was crucial, a warehouse was the safest choice.

The set decorations were built by me and two other members of the team on the eve of filming, and the props disinfected at the end. During filming the maximum number of people allowed on set was 5 crew members plus two dancers. We complied with all safety rules such as keeping distance between team members, wearing masks as well as disinfecting hands and props.

Working on a piece, movements, realizing what works or not, all by video call, is a challenge.

Personally, the most complicated part of the process was the distance between the team. I stand by the opinion that it is the people/team that make a film and not a camera, light or location. Any member of the team is instrumental in making the film happen. For that reason, when I reach the end of a shooting day, I need to give a hug to everyone on the team, in order to thank them. There is always that moment at the end of the day “we did it, good job!”. It was strange to finish a shoot and be obliged to thank people from two meters away, especially when the involvement of these people in the project, during such a strange phase, was crucial for the execution of the film. 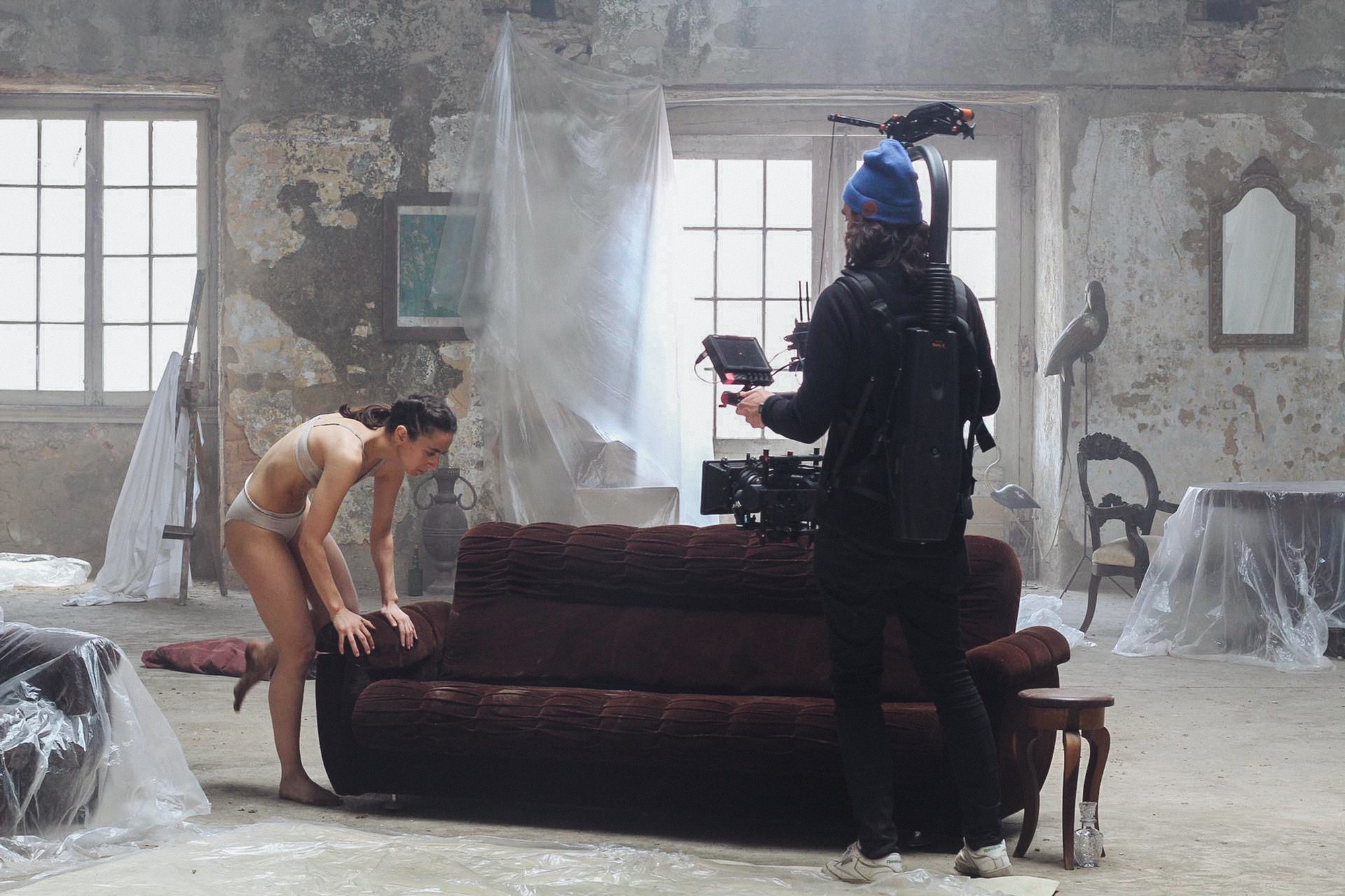 Desabitar’s music adds a haunting quality to this choreographed movement through memory, how did the film’s soundtrack develop?

Regarding the film score, it was written by a Portuguese musician, Noiserv. I am a fan of his work and I felt he would be the right person to give life to this “universe”. I sent him the script and gave him some references to what I had in mind. The idea was for him to create a first draft so that we could use it as a basis for choreographing and filming. Then, with the edit done, he would polish the music. What ended up happening was that this first version he sent came very close to what I had in mind, so the adaptation to the edit was fast.

Due to team, time and budget limitations, I had not contemplated audio post-production, however, when editing was completed, I felt the need to introduce some ambient sounds in order to escape the idea of a music piece. And so it was, on the night before delivery, the two of us stayed in his studio creating the foley of the plastic, the steps, or the cosiness on the sofa. He as a musician did not have much experience in this type of work, neither do I, so it turned out to be quite fun recreating the sounds, fitting them in and understanding what worked or not.

I am currently finalizing a project called Bukra. It is a documentary revealing different forms of resistance to the Israeli occupation in the Jenin Refugee Camp, Palestine. I am currently in the process of editing it and I hope to have the project finished in September.