Told entirely via laptop and iPhone screens, James F Coton’s latest short film, “Day 48” A Quarantine Short Story, is ripped directly from current events; using today’s dystopian-like environment to imagine the effects of quarantine upon a girl who believes she is seeing aliens. We sat down with the French director to discuss how he made such a topical film so fast, his frustrations around the coronavirus discourse, and the challenges of directing people remotely.

How did you come up with this concept: a film made in quarantine about quarantine?

When the quarantine started everywhere, everybody was a bit lost and afraid about what would happen. My wife started to say: “Imagine everything is fake and it’s a military exercise. Maybe there is no COVID-19”. It was a joke of course, but we started to think it would be great to do something like that. As a creative guy I didn’t want to do nothing and just play video games. We wrote it in two days. It’s a bit easy: there’s no big plot and no big characterisation. We didn’t want to talk about COVID-19 — as it’s a bit boring — but something different. Something strange is happening to her while everyone is giving their own opinion.

How was the casting process?

To be honest, we didn’t have too many choices. We thought at the beginning we would have a lot of people on board because everybody is at home. But to be honest, nobody was interested. Then some friends recommended people and we started to build a team of actors. It was UK talent. People from the UK are hard workers and really talented. More than French people. With French people it would be worse. So it was easy for me.

I think this kind of project is nice because if it’s not any good there’s not much at stake.

For people looking to make a film with a similar stylistic concept, can you walk me through how the production worked?

It was a big challenge to be honest. I did it because it was a challenge. As a director who does commercials and music videos, it’s a big frustration not to work. And I think this kind of project is nice because if it’s not any good there’s not much at stake. There’s no money involved, there’s no pressure. And if it works it’s nice for my personal stuff because it means I can tell a story in 20 minutes.

It’s a challenge here because there’s nothing happening visually. It’s just iPhones and some flat design. The big challenge was how to make it work technically. Because I didn’t just want to record a conversation on FaceTime as I knew I would lose sound and the connection. 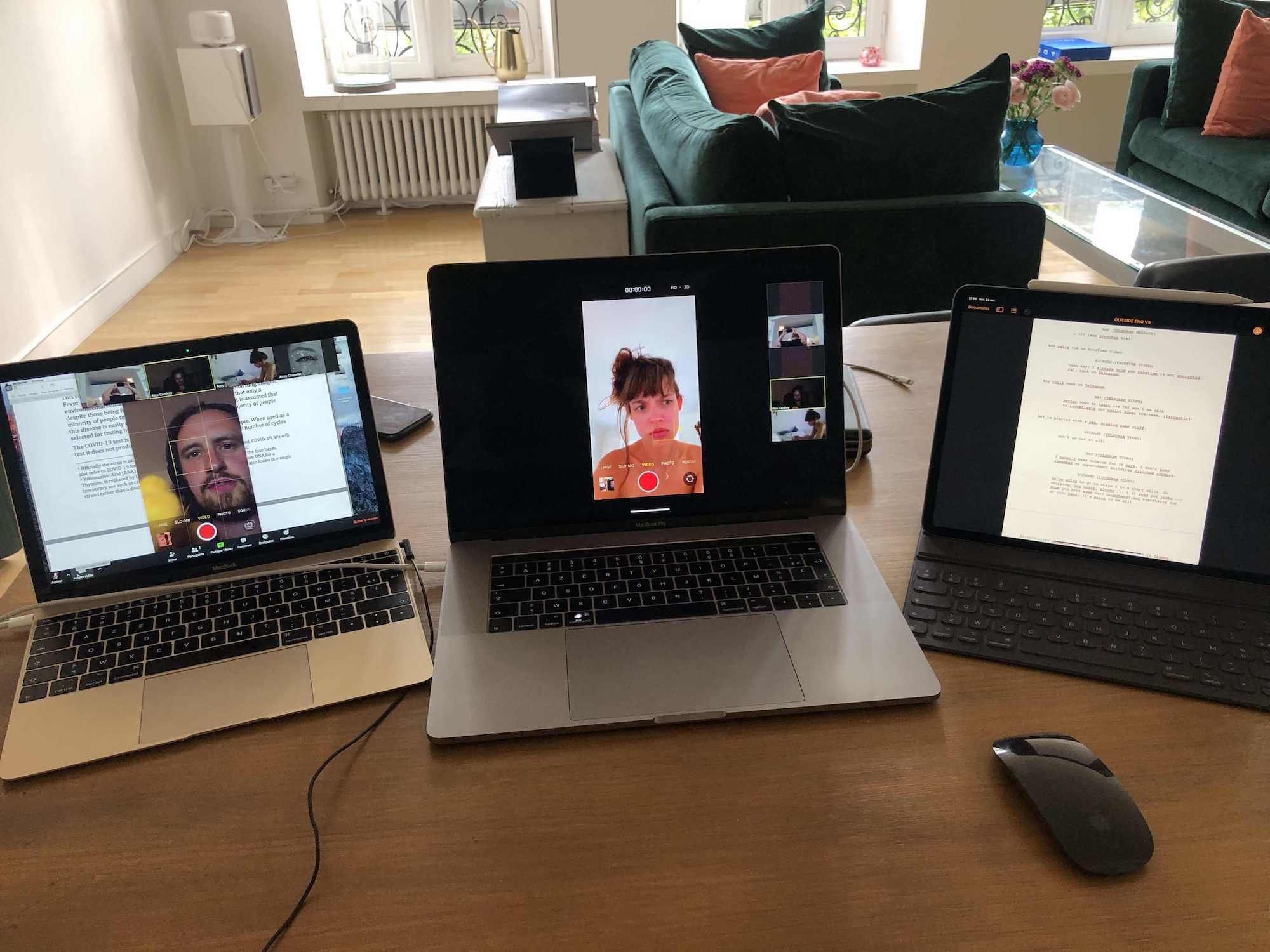 There is an application called AirServer. You put it on your iPhone and your laptop, and everything you see on your phone, you see on your laptop. And we created a session on Zoom — I bought a premium account — so I could share my screen. So there were two applications running to make it possible, and two computers: a screen of one talent and a screen of the second talent.

The biggest problem we had was with the internet connection. You think it works but then you have to start everything again because one of the talent has run out of internet. The second problem was file sharing. Everybody had moved from their hometown — they were in the suburbs or in the countryside, so sending 200MB took like three hours. So when you have a lot of files, it takes a week to send. You can’t ask the talent to compress it, to do the encoding. So, in the end, we used WhatsApp to compress and send each file.

The film is very ripped from the headlines. How long did it take to make?

I think maybe 17 days to write, cast, make the production and do the post-production. In the end, we had maybe one month because we knew in France that we would be released around May. Less than three weeks before, we were like: “Let’s do it”.

I did almost everything myself. As I’m not waiting on anyone it goes fast. I did the editing in one day, the post-production in two days, sound design in one day and mixing in one day. I learned a lot of stuff. When you have Premiere you have the option to create compositions in After Effects and Photoshop. For example, for motion design or correcting the name of something, I just had to create a link in After Effects then change it in Premiere. And that’s the reason why we did it in 15 days.

Why did you choose for your character to have synesthesia and visions of aliens?

As I was saying, I’m really bored that everyone is giving their own opinion all the time. And where is the truth? Now everybody says: “We need a mask, we don’t need a mask.” What do I have to do? So at this moment I was thinking: imagine that we have a girl and she’s seeing stuff. Maybe we can create something where everything could be real at the end. For me it’s like a parallel for the mask. Everybody’s right. And everybody’s wrong too. So let’s play around with all the different elements here. Every character was somebody around me during this quarantine. As for the UFOs; it was to make the film a bit more entertaining.

You made the film with a young daughter at home. How did you balance that with being a responsible father?

My wife helped a lot. My wife helped to produce. Producing is when you give the opportunity to the team and the director to be creative. My wife provided the opportunity to make it possible. She was taking care of the kid while I was sleeping at maybe three in the morning. When my daughter was at home it was quite difficult. They tried to go out while I was shooting. I also said to my daughter: “OK go watch a Disney movie. You can watch two Disney movies if you want.” Thankfully we are both freelancers so we can manage.