Relationships attract an amalgamation of experiences. But what happens when one begins to crumble and the only way you can think to fix it is by enacting out your furniture fetish fantasy? That’s the central premise to Randall Maxwell’s Bad Furniture. Despite its seemly very odd conceit, it’s a short which asks pertinent questions of how far we’re willing to go hold people up (both physically and emotionally). DN spoke with Maxwell about the inspiration behind this brilliantly unique short comedy.

You’ve worked across a number of different forms in various roles over the last few years, why was now the time to jump into writing and directing your own fictional short?

It was April of 2019, and I had been working in documentary content for a few years and feeling eager to get back to something narrative. I really wanted to direct something that I felt would show my sensibility for story and picture, and strategised to shoot something simply, but yet had an edge to it somehow, so that it could stand out amongst the vast sea of content at our fingertips.

I researched every fetish under the sun until I found the one that fit the bill.

The concept oddly evolved out of location. My wife and I lucked into this gorgeous, huge apartment that’s got all this natural light, and we have some nice furniture, and it now looked pretty snazzy in the new digs. Much to her dismay, I quickly had the idea to shoot something there. At about the same time, I read a Psychology Today article about how kink which, from a mainstream perspective is more commonly associated with the idea of perversion, is in fact more often a healthy way for people to deal with a past trauma or a personal issue. This fascinated me, and so I researched every fetish under the sun until I found the one that fit the bill, forniphilia or “human furniture”.

Did you build the narrative around that central conceit then?

Immediately, I fell in love with this bizarre visual, of a person giving way to complete objectification, and from there I quickly had the idea of a married couple who engage in this behaviour. The reality of such an arrangement felt like rich territory for character, why in the world would someone want to be a chair, or a rug, or ashtray, and why would someone want to sit on someone else as a chair? What gratification could that bring? It also struck me that such a connection between two people would be so precious, that from a story angle, it would be most powerful to witness that connection under threat, and so I set about crafting a tale portraying a forniphiliac couple in the midst of relationship crisis.

It’s also a visual metaphor too though of how, for want of a better phrase, we provide emotional furniture for our partners?

Through the writing process, I found how the concept could evolve and be taken almost purely as a visual metaphor, illustrating relationship dynamics. Like, do we sometimes take on more than we should in a relationship? Is one person more dependent than the other? Is one partner subservient to a self-destructive degree? Do we always see the effort our partners make to keep a relationship working? By restraining from addressing the forniphilia too directly, and instead letting the viewer watch these characters be who they are in their element, the characters became more human and the metaphorical and emotional aspects really popped. 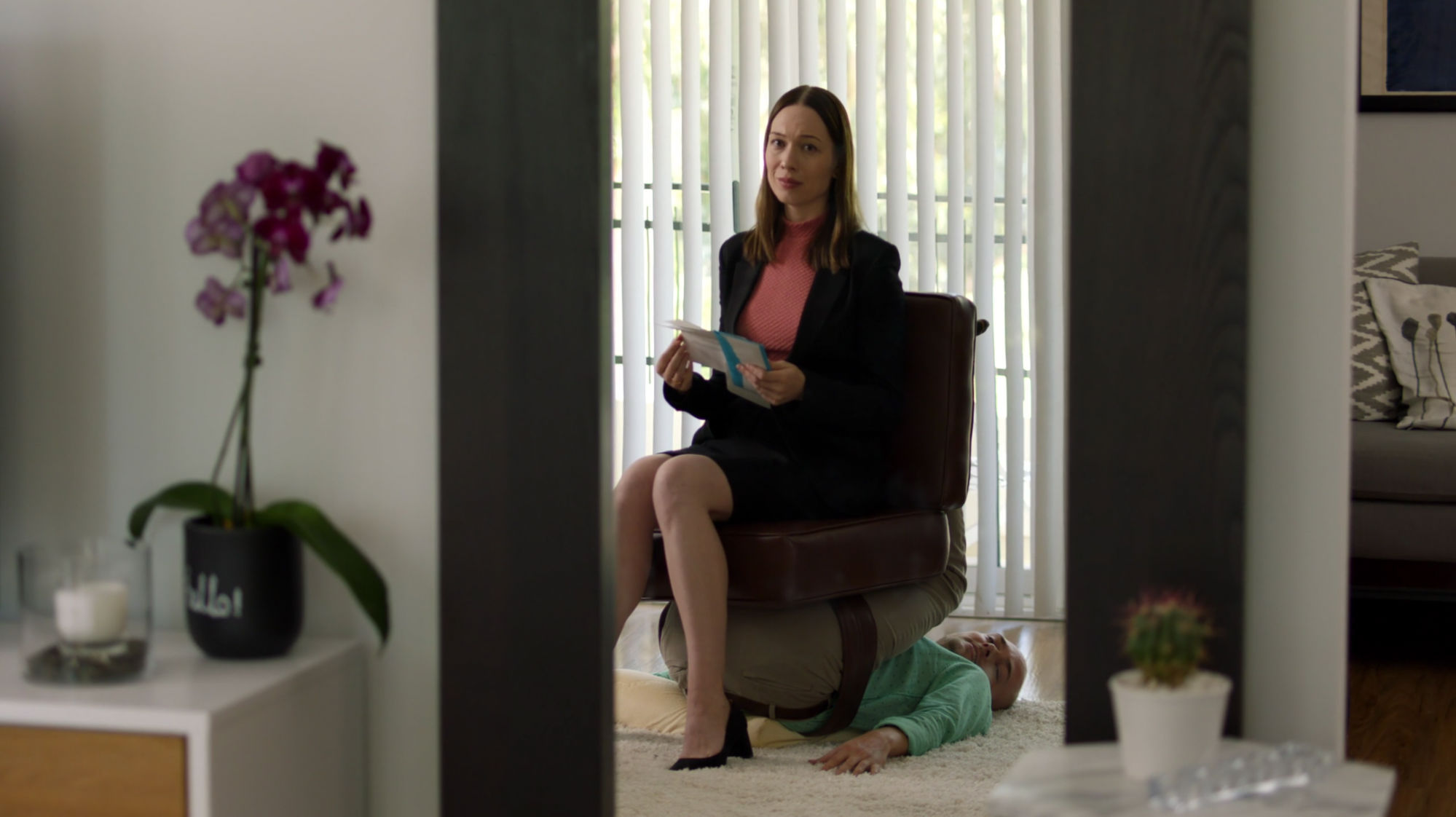 How did you assemble your cast and crew?

Our Executive Producer Andrew Laurich worked wonders in pre-pro to bring on Christina Lee to produce and Filip Vandewal to shoot the film. We spent the summer developing the script, casting, and prepping crucial elements for art department, namely the husband’s chair design. I took my time to find our leads Keene McRae and Rhian Rees, both of whom can emote so subtly and go so deep, that when I finally did, I had complete confidence to create the cinema I wanted to create. I’d planned for a lot of long takes and uncomfortable silences, stylistically aiming for Michael Haneke, Paul Thomas Anderson and Antonioni who I credit as big influences, and I thought they both did a fantastic job living in the moment and giving me so much to work with.

The music really helped tie it all together and thread the emotional through-line I wanted from the story.

Once you had everyone in place, did that allow for a swift road to completion?

We shot the film in two days on Alexa Pro in late August. One weekend of production was followed by a few months of post, with the initial rough cut clocking in at twice the length of the final. It took some time to whittle it down with us ultimately scoring the film in the following December and January. The music really helped tie it all together and thread the emotional through-line I wanted from the story. For me, Bad Furniture is an ode to love language, and a labor of love it was indeed.