A basketball bounces in a lonely court, the shadow of its owner looming over the expressive and ultra-wide frame. Judas drops us in the middle of our protagonist’s (Nick Preston) life, evidently frustrated about something. But he finds joy in the welcome presence of another (Lawrence Walker), challenging him to a game of one-vs-one. This cannot last however, as the two boys are from opposing gangs… Capturing this strife in closely-wrought detail, Adam Palmer’s Judas is a heartfelt exploration of masculinity in a rough-and-tumble area. We talked to him about his inspirations, the idea behind the unique aspect ratio, and the film’s queer subtext.

[If viewing on a mobile device rotate to landscape to experience Judas in all its 3.78:1 glory!]

Tell me the inspiration behind the film?

Where I live there are lots of youths that congregate in parks and streets. Usually a group of 15-20 guys and the whole scene is very heterosexual and very manly. I see them playing football and I always think: there must be one person within that group struggling with their identity. That’s what got me thinking: what if there were two characters from opposing gangs who were struggling with their identity in the sense of their sexuality, but feel like they can’t speak out because they’re in this very male, heterosexual group. I wrote this really loose script with the idea that I would take it to Nick and Lawrence and just ask: “What can we do with these characters?” It was very much a collaboration on the day when we made it.

We wanted this wide aspect ratio to stress the wider world that they’re living in.

The theme of the movie is stressed by a really cool, super wide and ultra slim aspect ratio. Tell us more!

The aspect ratio is 3.78:1! You’ll notice that it’s very close. Everything’s very close or mid. But we wanted this wide aspect ratio to stress the wider world that they’re living in; they’re within this basketball cage, so we will always see their relationship within this cage. It’s only when we see them switch back onto their front that we see through the bars.

A lot of Judas’ queer subtext, which I sort of thought but wasn’t 100% sure myself until you just confirmed it, comes through physicality and play; a non-verbal kind of choreography. How did you work through this dance?

We wanted to be as subtle as possible. We didn’t want to be like: “Look, there’s two guys. They’re having this romantic moment, there’s some sexual tension there!” We wanted to show it through the basketball game, where everything is very close, very touchy-feely, very contact driven. Then to have that moment where they finally interact one-on-one when there’s no basketball at all. They’re holding hands and it’s the first time they’ve been face-to-face without any sort of obstacle. Not just to drill it down people’s throats. Some people have watched it and they’ve got it straight away; others see it as a friendship, and that would still work, because it is a friendship. The thought was to be subtle, but hopefully not too subtle.

As a whole the film is quite minimalist. So we don’t see any other gang members, and we’re mostly inside this basketball court. Did you want to keep things stripped down the whole time or were some elements cut from the original script?

Everything you see is pretty much what was in the script. But I have written it in the sense that it’s a bigger story. For example, why is Nick’s character so angry at the start? What’s on his mind? Is he already struggling with these thoughts? What happens to them afterwards? I definitely think there’s a bigger story and that’s maybe something I’ll visit again in the future. I like to include a little bit of mystery in my films, just to get people thinking of what could come next.

This feels like an observation on traditional masculinity in rough-and-tumble areas. Did you want to comment on how there aren’t that many avenues for self-expression, especially when it comes to queer identity?

I confided with a friend of mine who acted in one of my first short films. He’s a gay man, and I spoke to him about growing up and how he had to come out and how he felt like he wasn’t accepted as he was to begin with. We had a chat and he helped me guide the script in a way I hope is sensitively dealt with.

I think also that you immediately think of gangs and things like that and it’s very masculine, very heterosexual, very us against them. Would they feel like they’re out of the gang because they’re expressing themselves in this way or feel like they can’t express themselves in a different way? That’s what I wanted to touch on.

The thought was to be subtle, but hopefully not ‘too’ subtle.

How did you find the court?

It’s actually my local park. I live just a two minute walk away. We wanted to keep it very simple and we shot it pretty much on a whim. We got some friends and colleagues together and were like: “Let’s shoot it here”. Luckily the estate we live on has this big Facebook group, and we let people know we were going to be filming. We choose Good Friday last year and it was the hottest day last year. Luckily I could nip back and get supplies and refreshments!

We pretty much stayed on the court for the full day; we had half the court and let some kids play on the other half. They were around eleven or twelve and were playing basketball. By the end of the day, they just sat there, watching us, asking us about the filmmaking process. Hopefully, that’s inspired them to look into that in the future! 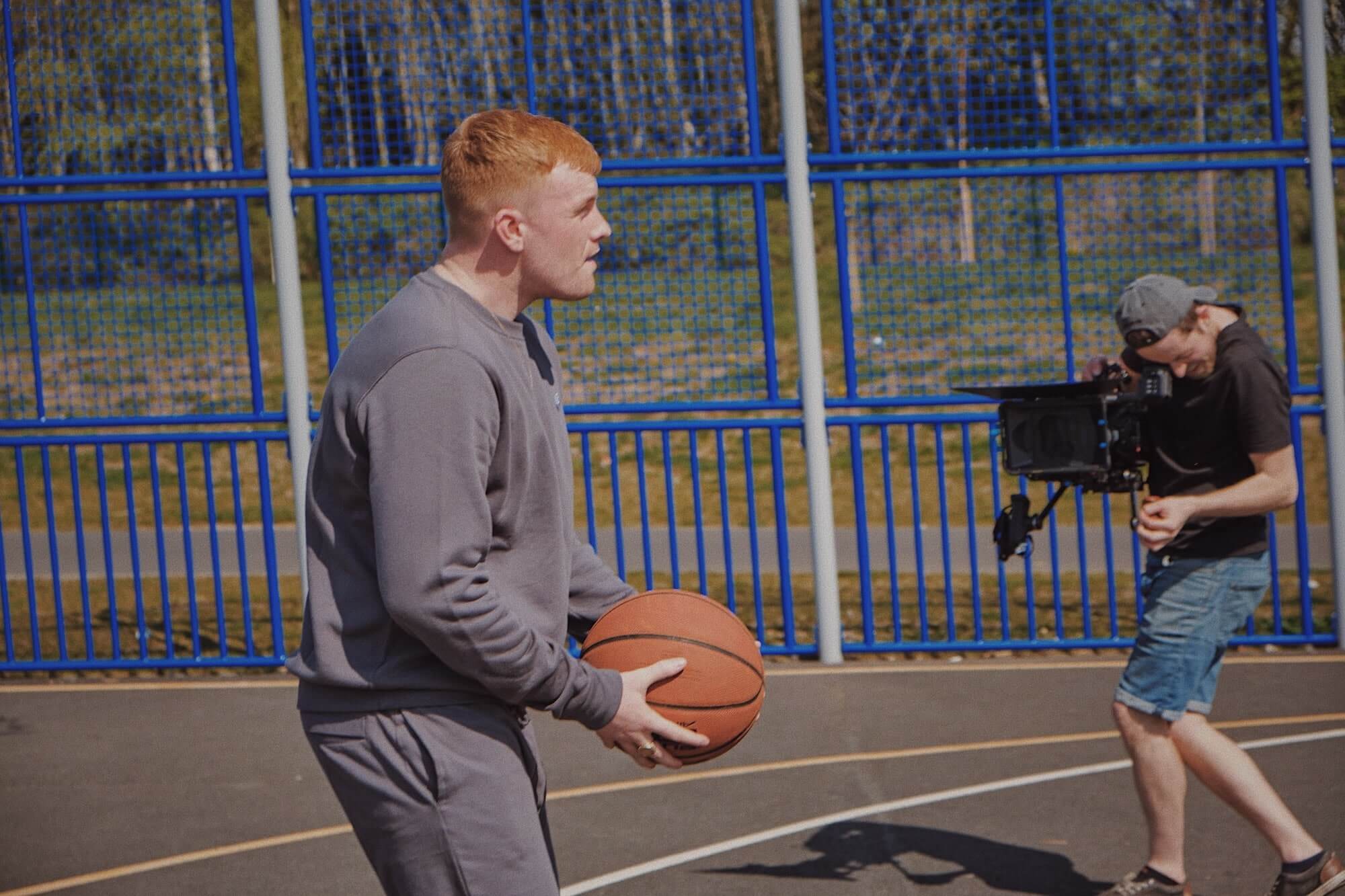 The more romantic elements are stressed through the music. How did your collaboration with the composer come about?

Thom Robson is a good friend of mine! There’s a bit of a theme here, working with a lot of friends. I’ve known him for quite a while and he’s scored every film that I’ve done. He’s fantastic at what he does. He needs little to no guidance. I just say: “This is the film. What do you think you could come up with?” Then he writes something that’s pretty much perfect the first time. He’s really good at matching visuals to the audio, making moments swell or making moments dip out when they need to. Especially during the basketball, it’s almost like a dance, and he upped the music for that. Then for quiet moments we didn’t really have anything there!

I have another short, which I’m currently writing, in the treatment phase. I also have a feature that I am slowly working towards. It’s set in the seaside town of Tenby, Wales. It’s a similar story in the sense that it’s a drama, and it’s set against an idyllic backdrop while something sinister’s happening at the same time. It’s somewhere that I’ve wanted to explore for a while!