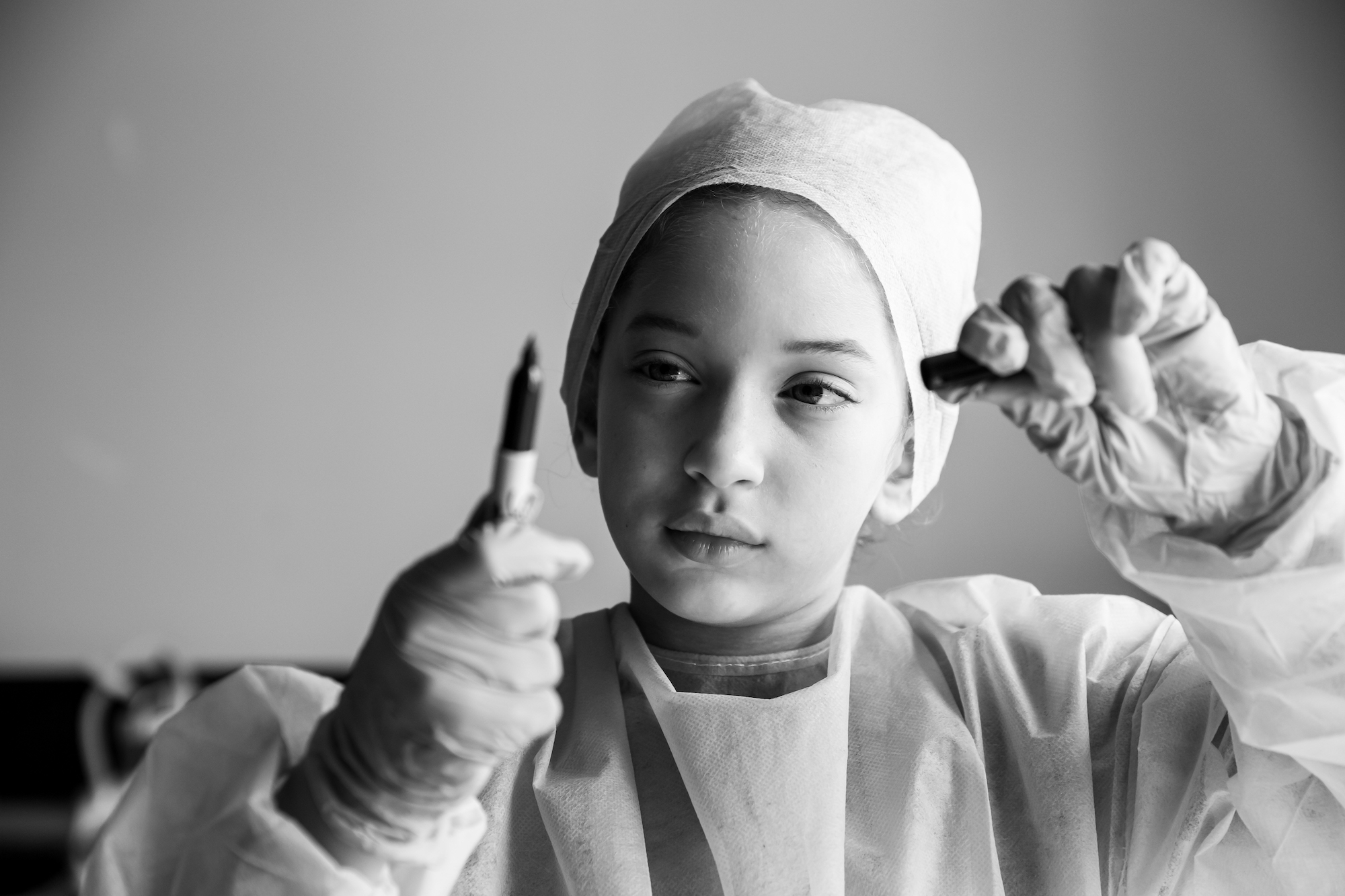 Shot in a striking black and white palette, Dimitri Yuri’s Falling Leaves is a short drama that balances multiple opposites: The old and young, life and death, and the familial and the unknown. It follows a young girl as she takes her first steps in learning the embalming process from her older brother. It’s a delicate and moving portrait of sibling relationships which captures life’s dichotomies in a beautiful and totally singular space. Read our conversation with Yuri below who talks obsessions with death, cinematography, and the challenges of film production in Qatar.

It’s such a unique setting for a film, what was it born out of?

For better or worse, my films always end up being about death. The CEO of the production company I work for sighs every time I hand him a script cause he knows someone will die eventually. But, if I’m being honest with myself, I just can’t think of a more fascinating topic to explore, it is the only certainty we all share, and yet also the most mysterious topic we can bring ourselves to talk about. And while cinema has given us incredible contemplations on death, I still felt there was room for new perspectives.

There’s something eerie that happens when one witnesses death. It’s as if the world becomes magical and dream-like.

Which led you to a mortician’s perspective?

I wondered what a mortician’s perspective on death would be, given the nature of their profession. That’s where Falling Leaves began, and although it eventually evolved and the character relationships took centre stage, I still tried to keep that initial curiosity alive. I definitely didn’t want to convince audiences of any particular view on death but hoped the conversation would resonate with some as much it resonates with me. While thinking about death is often seen as morbid, and thinking about life is regarded as a more hopeful alternative, the more you investigate, the more you realise they are really the same thing.

You utilise a specific visual style too; black and white with a narrow ratio, what was the thought process behind that?

From the very first discussions, the Cinematographer Nissryne Dib and I knew we wanted academy ratio and black and white. There’s something eerie that happens when one witnesses death. It’s as if the world becomes magical and dream-like; our sense of reality is swept from beneath our feet and for a while, we inhabit this limbo-like place. I wanted the visual language of the film to evoke this feeling, and transport the viewer into a different view of the world than the one they’re accustomed to. We shot it on the Alexa Mini, over the course of two days, using mostly natural lighting, which is Nissryne’s speciality. Every time we turned on a light on set, something felt off.

Did you borrow from any particular influences?

Visually, we borrowed a lot from movies, photography, and paintings that we love. The soft, natural light coming from the window is straight out of Dutch Baroque. The black and white gets inspiration from Sally Mann’s photographs, and the composition comes from films like Carl Dreyer’s The Passion Joan of Arc and Pawel Pawlikowski’s Ida. Nissryne completely immersed herself in the references, and seeing her construct these shots has been some of the most impressive creative work I’ve gotten to witness.

We worked closely with our Art Director Mayar Hamdan to add depth to the black and white, playing with a variety of tones in the wardrobe, set design, props, etc. Mayar is a colour specialist, and asking her to work on a black-and-white film felt like asking Michael Phelps to be a lifeguard at a kiddie pool. But she embraced the challenge, and still managed to sneak in her personal style, the colour version of Falling Leaves looks like a morbid Wes Anderson film.

Visually, it feels really economical too, you’re getting two stories at the same time: The brother and sister’s story, and, without spoiling anything, the lady on the table’s too.

I wanted the film to flow smoothly from procedure to procedure, weaving between macro close-ups and the conversations between the two siblings. That way, we were telling the two stories simultaneously. There is the story of these siblings bonding over their family trade, but also the story of the dead woman, told through her body, with all its tattoos, birthmarks, scars, and idiosyncrasies. It’s only at the end that we realise they are really the same story.

Post-production also involved a few VFX shots, done by James Copplestone Farmer. They helped compliment the special effects and make-up we captured on camera, and it also helped us freeze the dead woman in a couple of places, our actress Maysaa Almumin truly inhabited her dead character, but we all got to breathe sometimes.

I wanted the visual language of the film to transport the viewer into a different view of the world than the one they’re accustomed to.

I’m interested to know about the process of production in Qatar, was anything affected by creating Falling Leaves there?

Qatar can at times be a difficult place to find actors, and we knew finding a child actress that could convey the complex emotions we wanted from the sister was going to be hard. We had no leads, but our Producer Jemina Legaspi suggested we should go to a mall and ask some families, just like that. I thought it was a stretch, and our pitch was not the most inviting: “Hey, would your eight-year-old daughter like to audition for this role where she gets to embalm a dead woman?” But that’s where Jemina’s genius comes in, because the first family we approach ended up being the right one.

We met Trinity Etheridge at the Angry Birds store, shopping with her mom and her brother, and they were super excited to participate. After the first few auditions we knew she was the perfect choice for the role. The first set-up on the first day of shoot required a three-minute conversation that we needed to get in one take, and Trinity, who had zero acting experience prior to this film, nailed it from the first try. I, on the other hand, required several takes.

What can we expect from you in the future?

With The Film House, we just completed a short documentary on the Indian artist M.F. Husain, and we’re currently sending it to festivals. When it comes to personal projects, we’re planning to film my next short before the end of the year. It’s a dark comedy/drama called Nothing but Endless Suffering. I know, sounds like fun for the whole family.