The final track of Phoebe Bridgers’ new Punisher album, I Know the End elegantly builds over its six-minute runtime, providing an intimate yet epic reverie on the state of the world. Alissa Torvinen’s music video, shot in the LA Memorial Coliseum, sees Bridgers decked out in her trademark skeleton onesie, roaming the empty stadium while coming to terms with her own mortality. A prescient depiction, both physically and metaphorically, of life under the current coronavirus pandemic, it marks Bridgers’ ability to make sense of the current moment. Torvinen joins us today to discuss setting this unique song to images.

How did your collaboration with Phoebe Bridgers come about?

She’d seen my reel and said she wanted to work with me. I had the opportunity to sit down with her over coffee a number of times. It’s quite rare but it’s my favourite way to work. It makes the job much more meaningful when you have that relationship. I understood going into the shoot what’s important to her as I heard from her directly. They’d already secured the Coliseum and she knew that she wanted it to be an evolution of her Motion Sickness video. She wanted it to be a horror film and for it to end with this big concert that nobody really came to.

I wrote a number of treatments. We landed on this idea she liked and then we toured the Coliseum together. Then I built the final treatment from that, which was nice to design from the location itself.

She wanted it to be a horror film and for it to end with this big concert that nobody really came to.

She’s currently in her skeleton onesie phase now, with its obvious connotations of death. The venue is also the LA Memorial Coliseum. Was it specifically chosen because it’s a stadium dedicated to the dead, so their ghosts are kind of there?

Not actually, but Phoebe is kind of magical in that. She says she falls into metaphor by accident. It’s really profound. I think she has really tapped into something. The Coliseum approached her about doing some stuff there, and she felt this place would be perfect for the video because it’s such a dystopian-feeling spot. As for the skeleton costume, I know she tried some other things but I think the skeleton costume just kept happening.

She falls into this stuff where sometimes it’s just practical, but then there’s so much significance. Like this video, filmed in March, has so many pandemic themes with hand-washing, social distancing and empty seats. I don’t want to say it happened by accident, but there’s something so poetic to the way she finds metaphor. 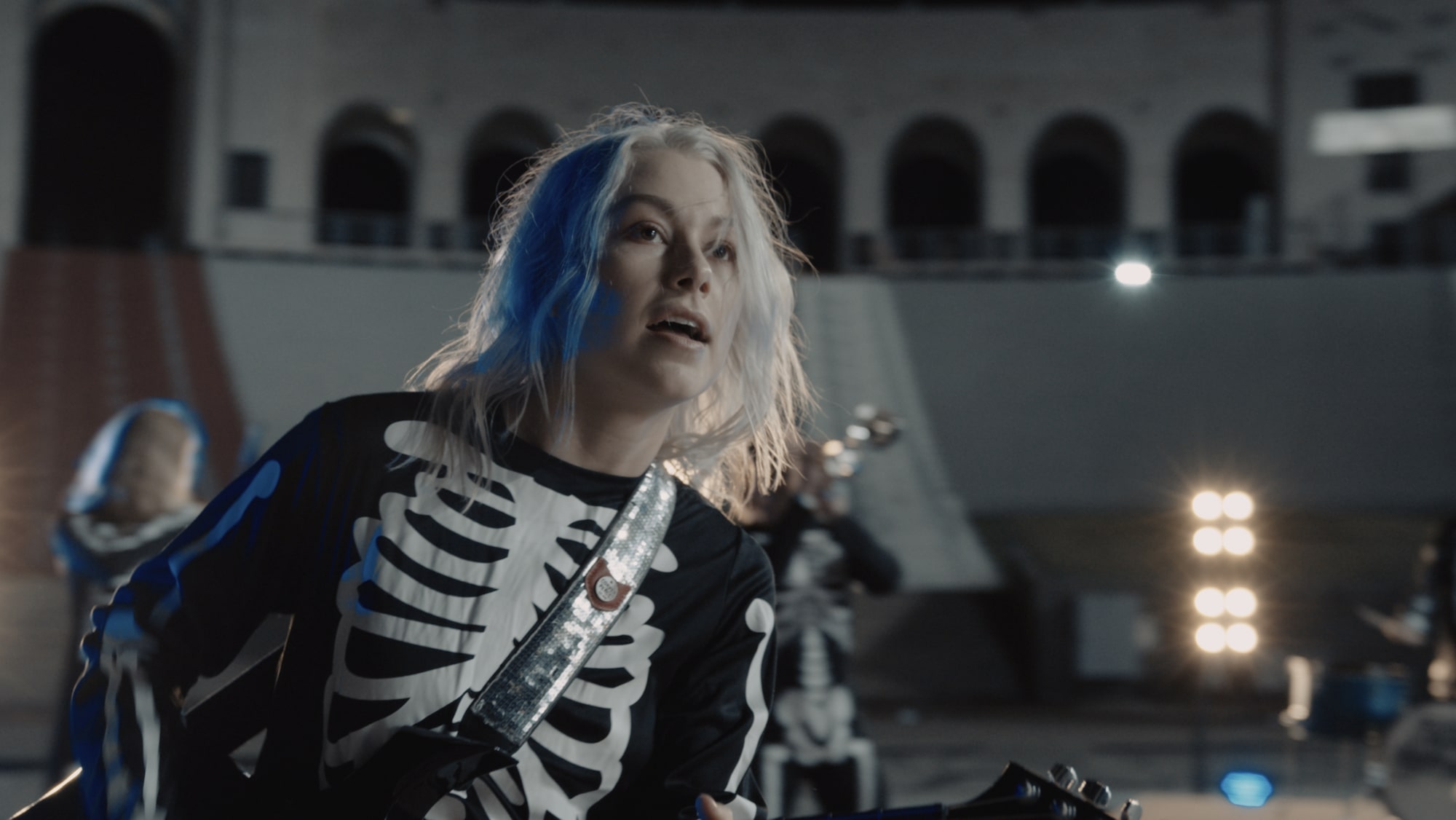 That’s fascinating as it seems the film is directly commenting on the pandemic. But I guess the film can be interpreted in a number of other ways: coming out, coming to terms with death, the end of the world, or even the loneliness of touring. Did you want to keep the filmmaking open, so all these interpretations could hold equal weight?

Yeah. That was Phoebe’s direction as well. She doesn’t want to make anything too obvious. She doesn’t want to create any idea for somebody that tells them how to feel about something. Everybody can draw their own conclusions. But there were ideas behind everything. I need that to make decisions. I wanted it to feel a bit trapped so we didn’t want to have looseness in motion. I originally wanted to shoot it on a dolly, with all the tracking shots and stuff, but we didn’t have the time in such a big space. There were things we talked about like that. For example, the hand-washing could be significant. But we never wanted it to be super obvious.

The song itself is very cinematic, with a clear three-act rising structure. Did you think a lot about how you wanted to arrange the images in the film alongside this clear template?

Absolutely. That’s something Phoebe was drawn to. I often write narratives like this and labels don’t always go for it. They generally want more freedom in the edit rather than to commit to something on set. When Phoebe said she wanted to do one I was like “Excellent! That’s all I want to do”. But as it was a six minute song I had to previz every shot. There’s only one close-up we shot that’s not in the edit. Everything else was timed to a T. We didn’t have time to run through the song that many times. It was very structured. My Cinematographer Casey Stolberg was very clever at keeping and doing such a beautiful job of lighting and setting up the space while we were moving very fast.

We didn’t think about what people’s response would be as much as we knew that it felt powerful.

I also noticed a change in aspect ratio as the film gloriously opens up and feels much bigger? Did you want to use this technique to make it feel like the world is expanding?

That’s exactly what we had in mind. Earlier I spoke about how we wanted it to feel like she was trapped. We wanted to feel there’s this sense of control. Then with the aspect ratio opening up just as she is running, the world is opening up and the song opens up with it. It just felt right.

To me, the film seems to be about letting go and coming to terms with ageing, ending with a kiss between what appears to be Bridgers and an older version of herself. The kiss has provoked a fair bit of debate. Did you anticipate this reaction?

We didn’t think about what people’s response would be as much as we knew that it felt powerful. It is kind of, I want to say, offensive, but not in a way to offend people. It makes you feel something no matter whether it’s positive or negative. That was another one of her ideas. One of her friends did this thing where’d he make out with audience members. It came from that.

I’m doing a little bit of commercial stuff. And I’ve got some writing projects going. I’m also doing some post-projects which has been nice, as this is the first time I’ve been able to do a full project from my couch. Now, in the midst of the pandemic, I’m just trying to stay safe and not put anyone at risk.

I Know the End is one of the many great projects shared with the Directors Notes Programmers through our submissions process. If you’d like to join them submit your film.