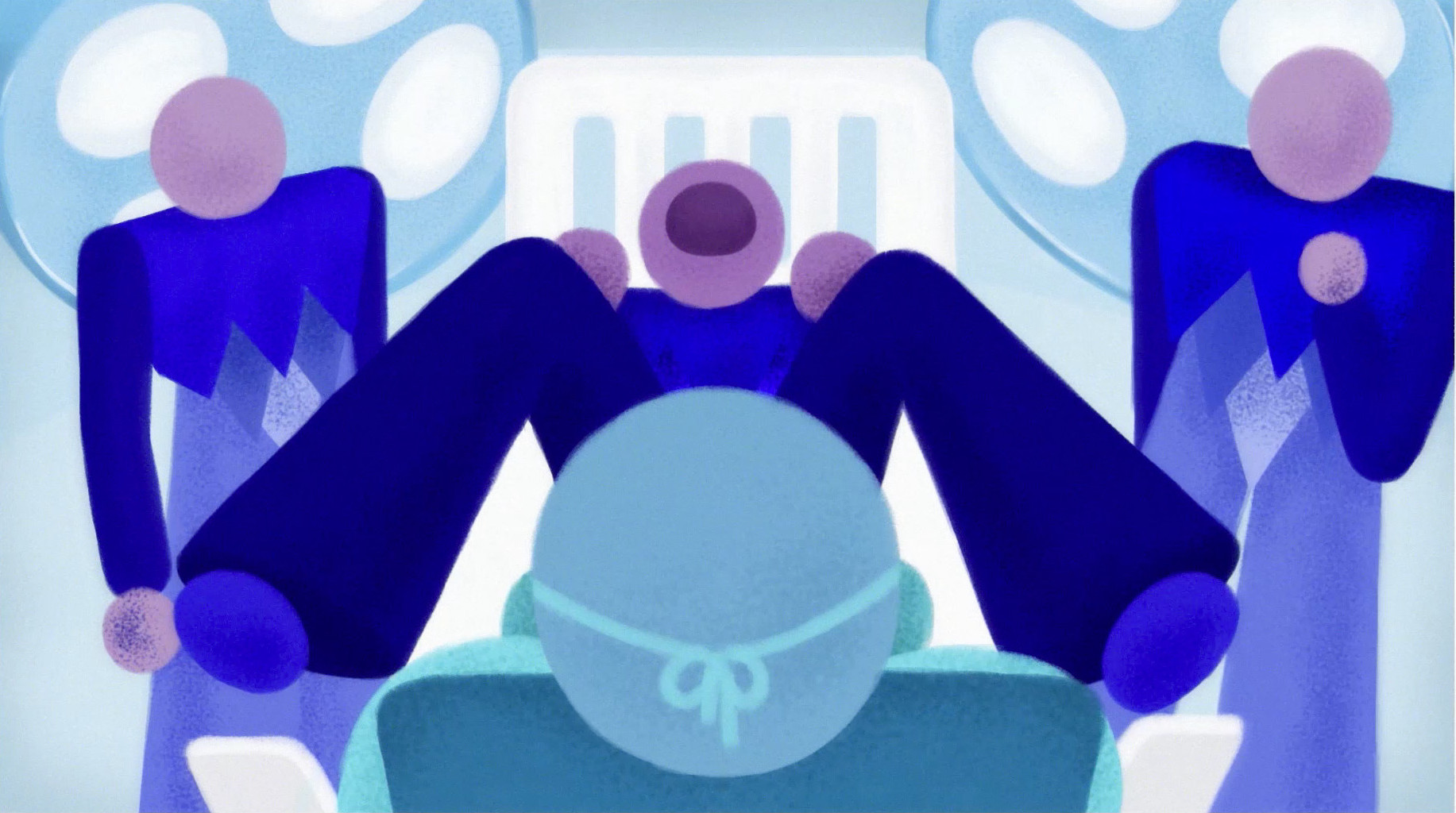 A mysterious blue object appears out of nowhere. At first, people are perplexed by the strange shape and take to the streets in protest. Yet before long, the world starts turning blue… An enigmatic reflection on the power of cultural invasion rendered through delightful animation and deadpan narration, 0000E8 — named after a particular shade of blue — is the latest work from California-based animator Yana Pan. Joining us to provide some insight into this intriguing film, we speak to Pan about the process, including her use of colour and painting inspirations, as well as what it could all mean.

What inspired you to tell this blue-hued story?

Weirdly enough, it’s about culture and the popular mind of humans. I think it started while I was thinking about cultural invasion. A lot of things nowadays are some form of colonialism but in a more invisible way. I was thinking about all these little things that are merging into our lives without us noticing it. Then when we notice, it’s already become this completely different thing.

I think that this blue is kind of out of this world.

I felt there was a contrast between the voiceover and the story through the use of colour. How did you think about colour guiding the story?

Even though it’s a rather serious topic, I don’t want it to feel ‘intense’. I want it to be more approachable, so everyone can watch this, and doesn’t need to understand it as I’m thinking. Colour is definitely a big part of the film as well. At first everything is different colours and also rounded, with this element intruding. I was born and raised in China, and we had a whole period of time where the government locked us down in our society and there was no sense of fashion. Everyone wore military uniform and all the clothes are in plain colours. People didn’t really care about it until the gate was opened and all these Western cultural fashions come in. Then people just couldn’t wait to try them on. 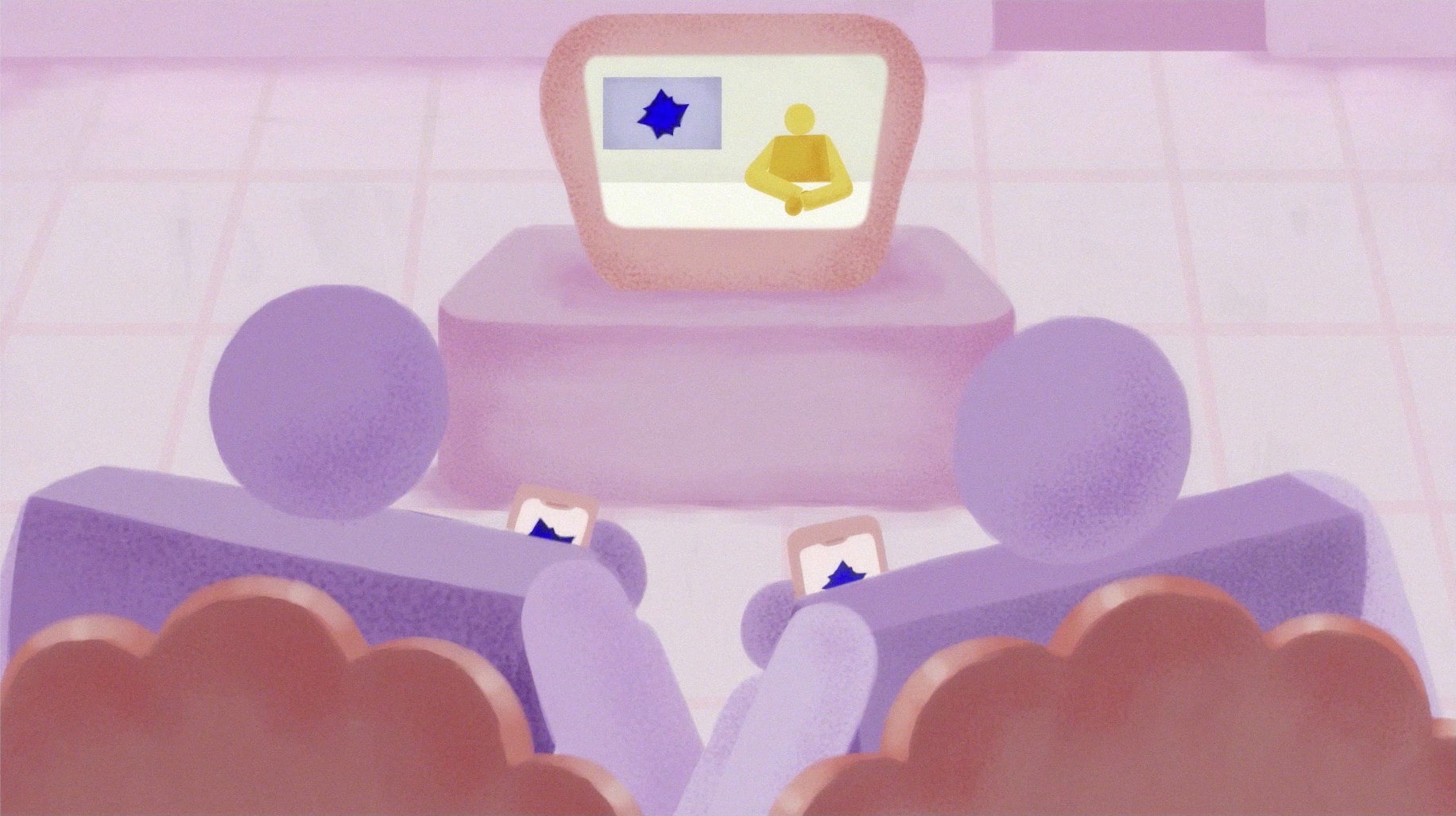 For me the film seemed to be an allegory of how aliens come to earth or the immigrant experience.

Yes, that’s a definitely a point I was trying to merge into the story: the fact that people don’t know how to handle this new thing, it could be immigrant, it could be alien.

The shape is kind of like a star but it’s asymmetrical. How did you think about it should look?

The reason why it’s sharp and a little bit asymmetrical is because the world that people currently live in has rounded edges. I was trying to draw a big conflict between the world and the shape.

I Googled the name of the film, 0000E8, and it comes up with a very specific colour. Why did you settle on this deep, monochromatic blue?

I think that this blue is kind of out of this world. It’s a very artificial colour, so it just stands out. At first I went for black because everything is colourful and I thought it would make a very good contrast. But then it’s a bit risky if everyone turns black, so I decided not to go down that route. 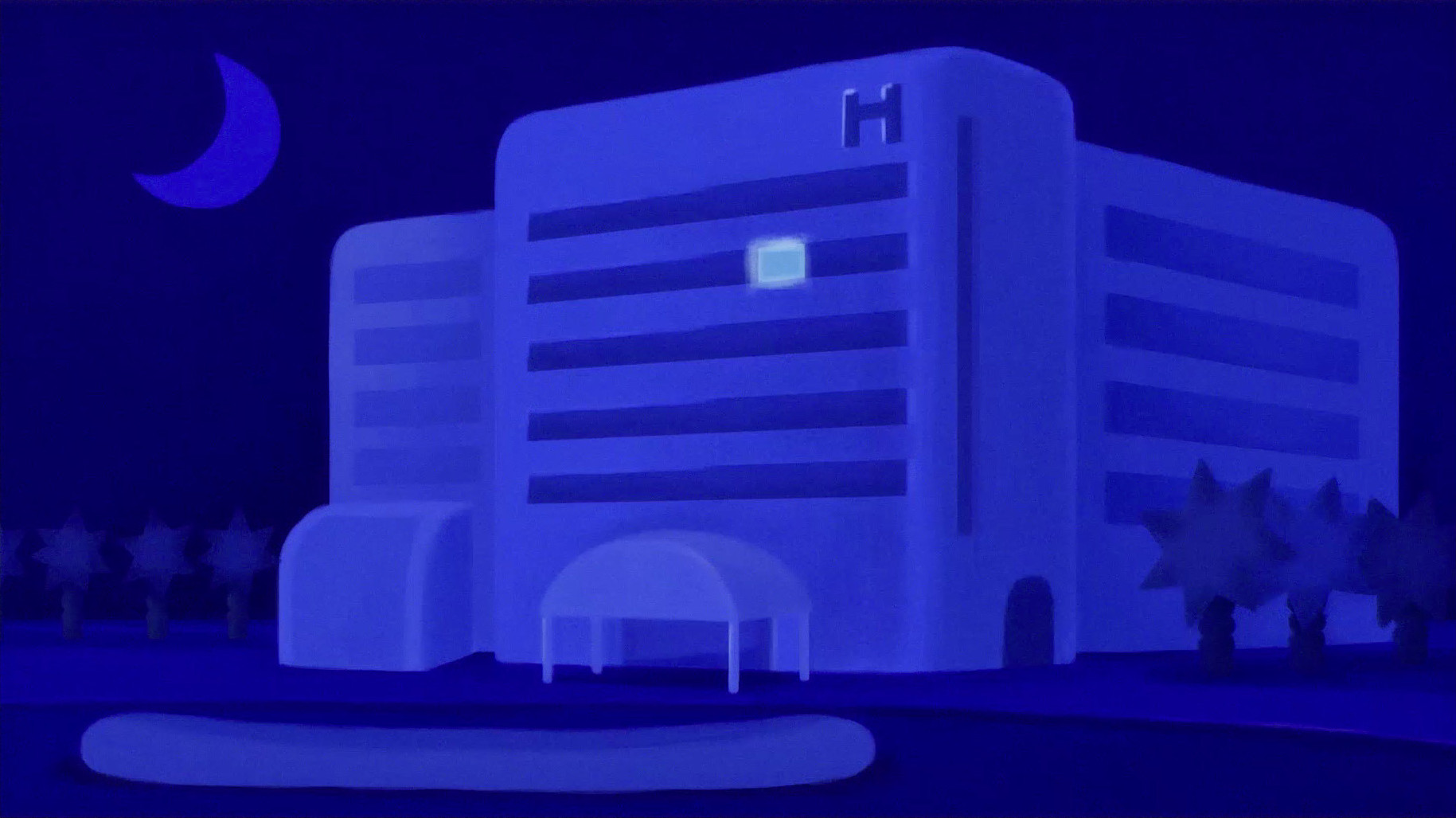 The blue reminds me of Yves Klein’s paintings, were they an inspiration at all?

Funny you mentioned that. It wasn’t really my intention but when we were reviewing this in a classroom setting and there’s a big screen in the wall, and when I saw the blue lights coming out from the screen, looking really powerful, that’s when I remembered this painting. There’s also a film that’s just a blue colour on the screen [Derek Jarman’s Blue] and then the narration goes over it. I definitely thought about that and how the power of colour could make people feel, even though we don’t know exactly what that is.

I definitely thought about how the power of colour could make people feel. 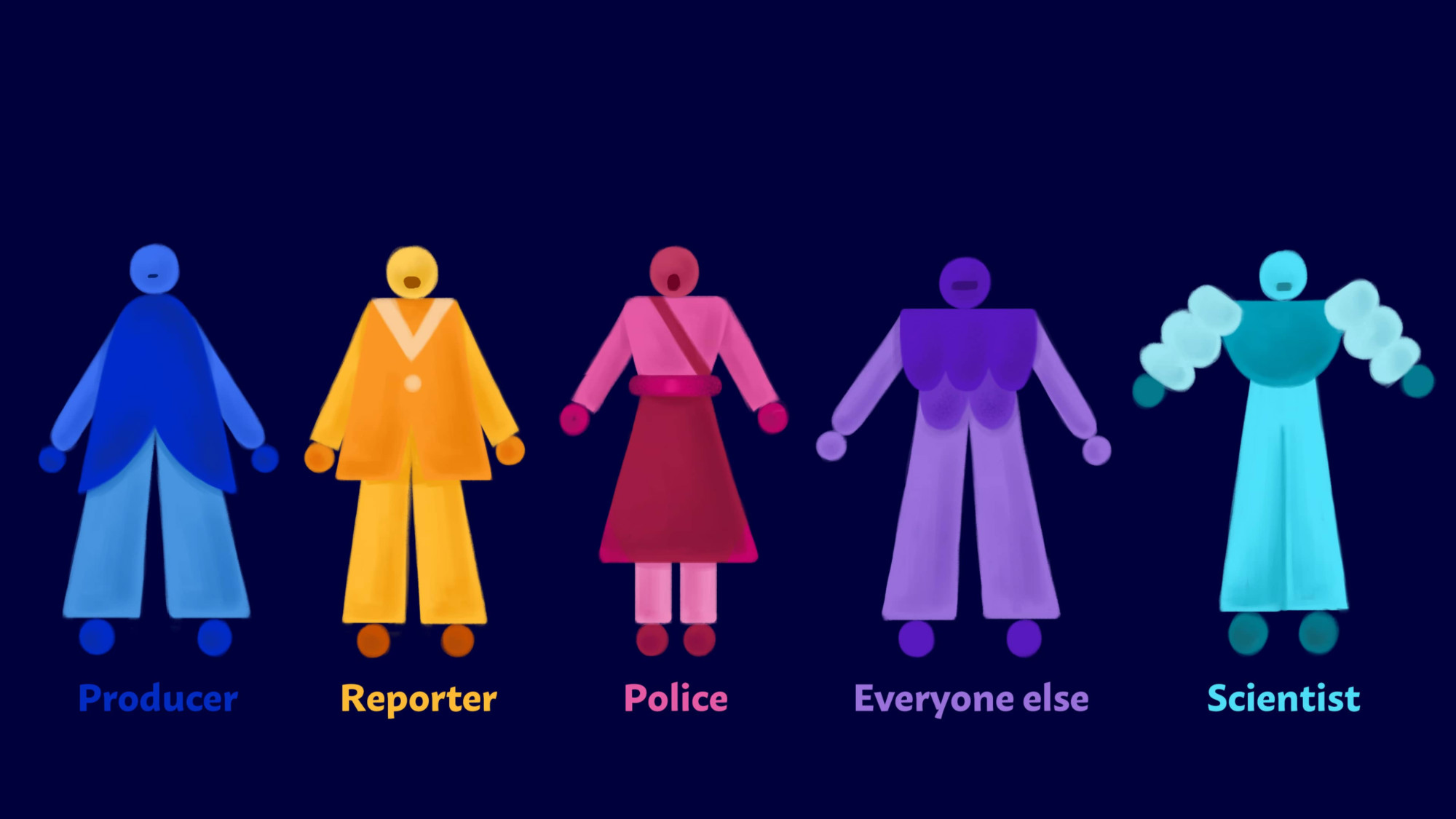 I think there’s this comic element here of abstraction being categorised by humans. Did you feel that this could be a comment on organised religion?

I think one of the reasons I decided to go with this abstract style is so the audience could put whatever they feel into my film. I was also playing around with Christianity towards the end, like with the baby with the star-face, and then I was kind of thinking about how shapes also had a religious effect on the world.

What did you use for the animation process?

Everything is 2D on a computer. I just Photoshopped and animated it. I used Photoshop because they have all those brushes that are really really nice that you just can’t get from any other software.

You’re studying an MFA at CalArts. Did you envision the story there and how helpful were the people around you?

At CalArts it was very very open. I would say when I first came up with the story, they never really tried to shape it in any way. They just help to push you to where you’re imagining for this piece. For example, the colour change was based on feedback I got in class. So yeah, everyone has been really helpful and direct as to what they think is or isn’t working.

I also think your narration helps to give it a unique style. Do you like to put your own voice, quite literally, to these stories?

It’s funny because I hate my voice. It sounds very awkward for me to hear it. The only reason I did it by myself is because I couldn’t find the right narrator. It was easier to do it because I wrote the script and I understood what kind of emotion I had to put in. 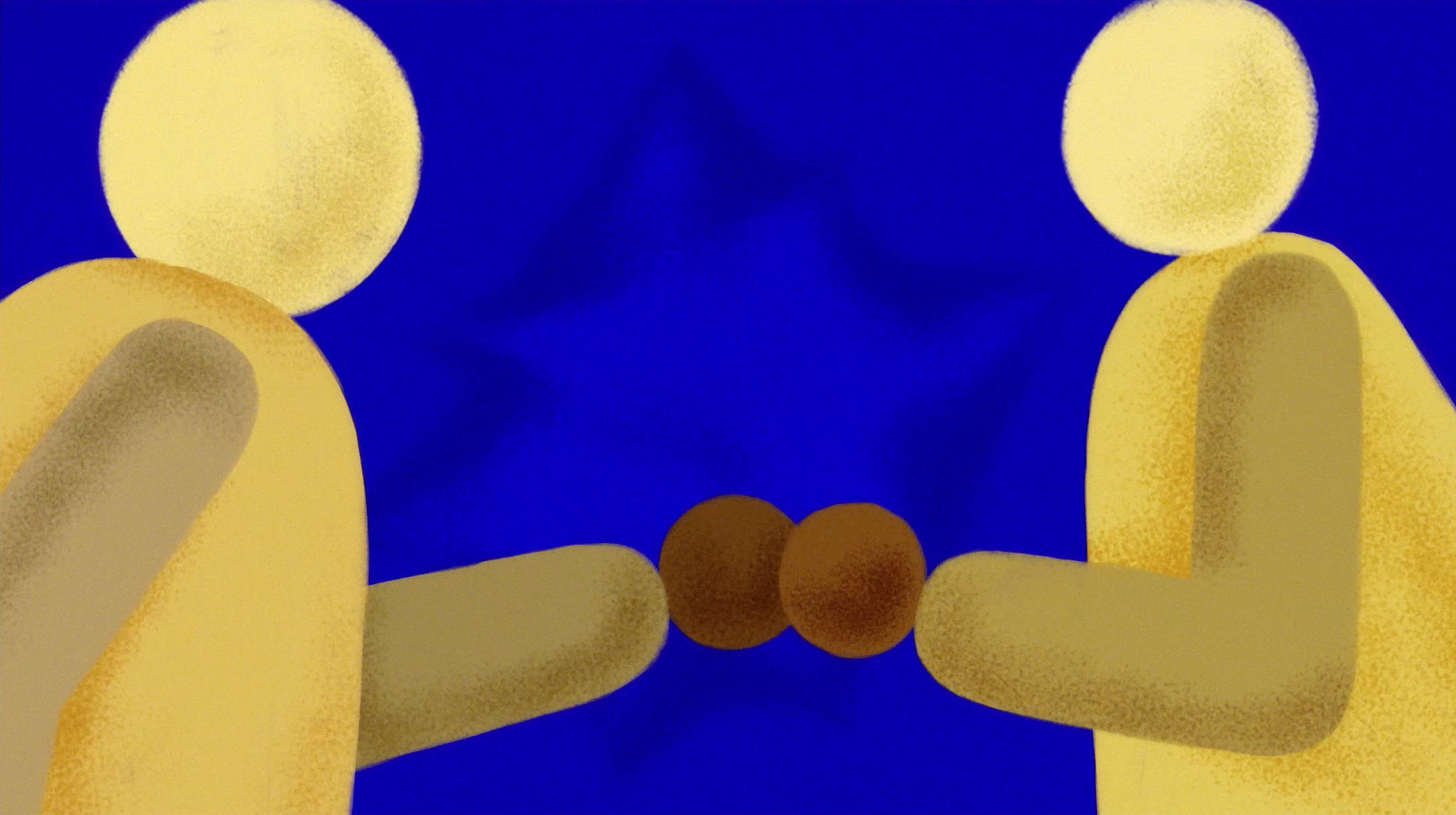 This is complemented by low synth sounds and rumbling off-key sound design. How did your collaboration with Franky Fox come about?

He’s also studying at CalArts, that’s how we met. It was so crazy that his normal style is not like this. He’s actually in a psychedelic rock band. One of the big references that we drew on is repetitive sounds, and the movie Berberian Sound Studio. References were coming from all over the place in a way, but I think our main goal was trying to keep it simple. I remembered one note I specifically wanted was more bass, so there’s a low frequency that will make people feel there’s something wrong and uncomfortable.

One of the reasons I decided to go with this abstract style is so the audience could put whatever they feel into my film.

I think I’m still debating it. I’m really into a sci-fi setting or a bigger topic about humanity and the society we live in. I also really want to make something very personal but I’m kinda scared, so I’m swinging between those two topics right now.