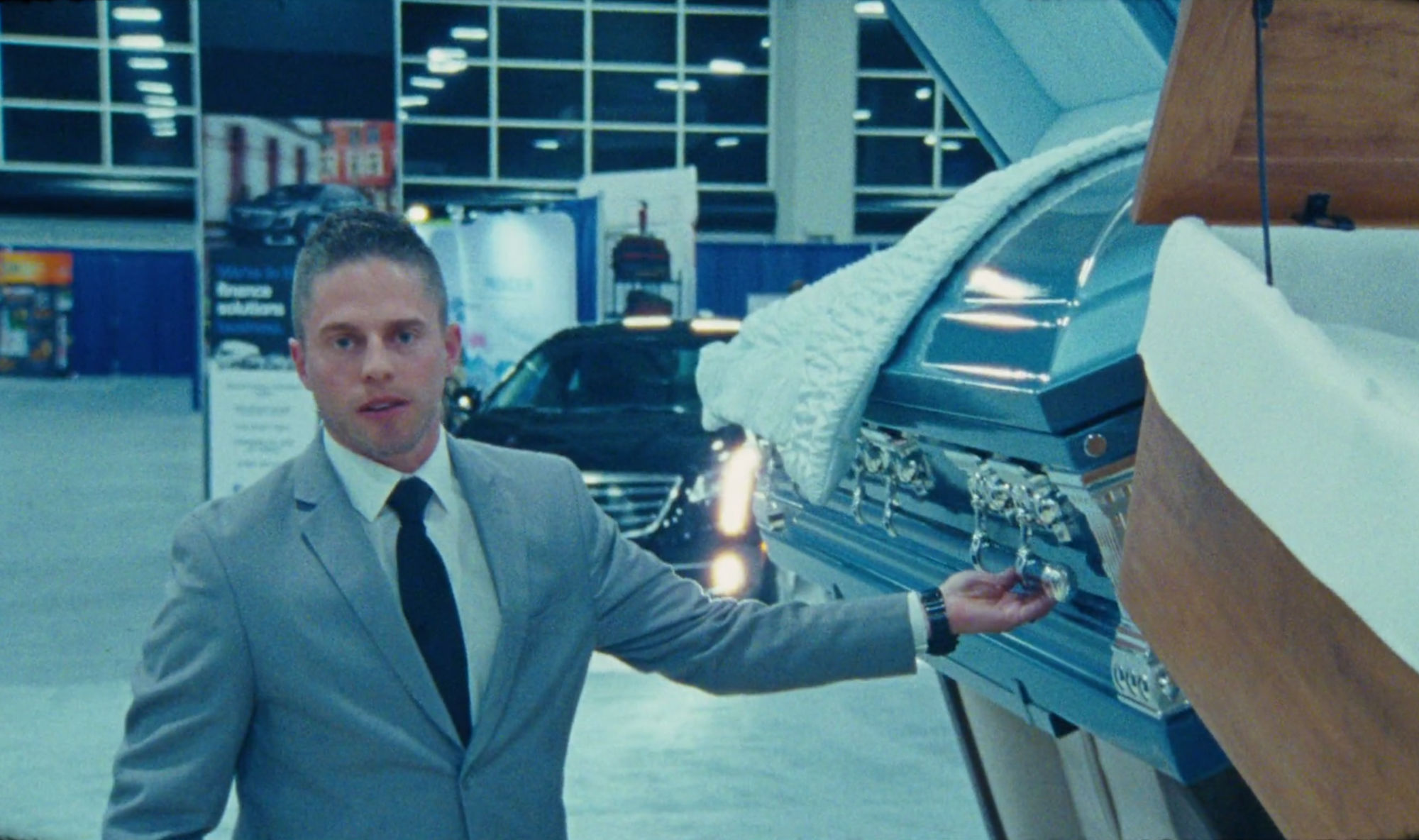 Funerals are a business. A ‘huge’ business in fact, making billions of dollars every single year. Interested in the ways that capitalism and death intersect, Director Kevin Castanheira headed to a conference in Salt Lake City checking out the latest innovations and technologies in the business but what he found upended expectations, providing a fascinating insight into one of the world’s oldest professions. We invited Castanheira to take us through the production challenges of obtaining permission to shoot, bringing emotion out of subjects, and balancing humour with darkness.

How did you first hear of this conference?

My background is in snowboarding and snowboard filmmaking. Once a year there’s this convention for snowboard brands and shops around the world. They go to this convention hall, congregate and talk about new things to come out. This is something I had done in the past few years or so. Then I was interested in the concept of other industries, and how there’s this gathering of people who all do the same thing.

I thought it would be interesting to research the funeral industry and how they go about it and some of the thought processes there. When you work in such a dark industry, you’re closer to the idea of death every day. I just thought it was a very interesting industry to explore. Before I shot it, I thought that these people might have some insights — not the meaning of life or anything grand like that — but just maybe they understood it more. So I went in with an open mind and was kind of navigating things as they happened in front of me.

Where is the conference based?

They change it every year. Every year it’s a different city. I shot it in Salt Lake City, but I think the year before that was in Las Vegas. Then I think they did Philadelphia. They just kind of switch it up because it’s a global thing.

Is it a business to customer thing or more for businesses to connect together?

There were vendors: people who sell caskets. Then there’s the tech end of it as well: innovative products and services. The consumers are people who own funeral homes locally in their city. Then they have conferences amongst each other about their techniques, such as embalming or burial, and that kind of thing.

I had an idea of the story that I wanted to tell and that quickly changed before me.

What was it like trying to get permission to film, who did you reach out to?

It’s called the National Funeral Directors Association. We reached out to the PR agency that handled it and I pitched them the idea. I think they were apprehensive at first, but I had a couple of phone calls and put together a rough synopsis of what we wanted to do and how we wanted to do it. Then we basically showed up with a small crew and spent two days there.

What I find affecting about the film is that it starts quite strange and gauche with all these bizarre products but then it takes a much more melancholic turn. Did you go through a similar process while making the film?

That approach happened really organically as we were experiencing the convention. I had an idea of the story that I wanted to tell and that quickly changed before me. Originally, I wanted this observational point of view, like if you’re just a normal person and don’t know anything about caskets or any funeral related things. I was first affected about how strange it was to me. It was just weird. So there’s kind of a satirical point of view in the beginning, then it happened linearly as we kept shooting. 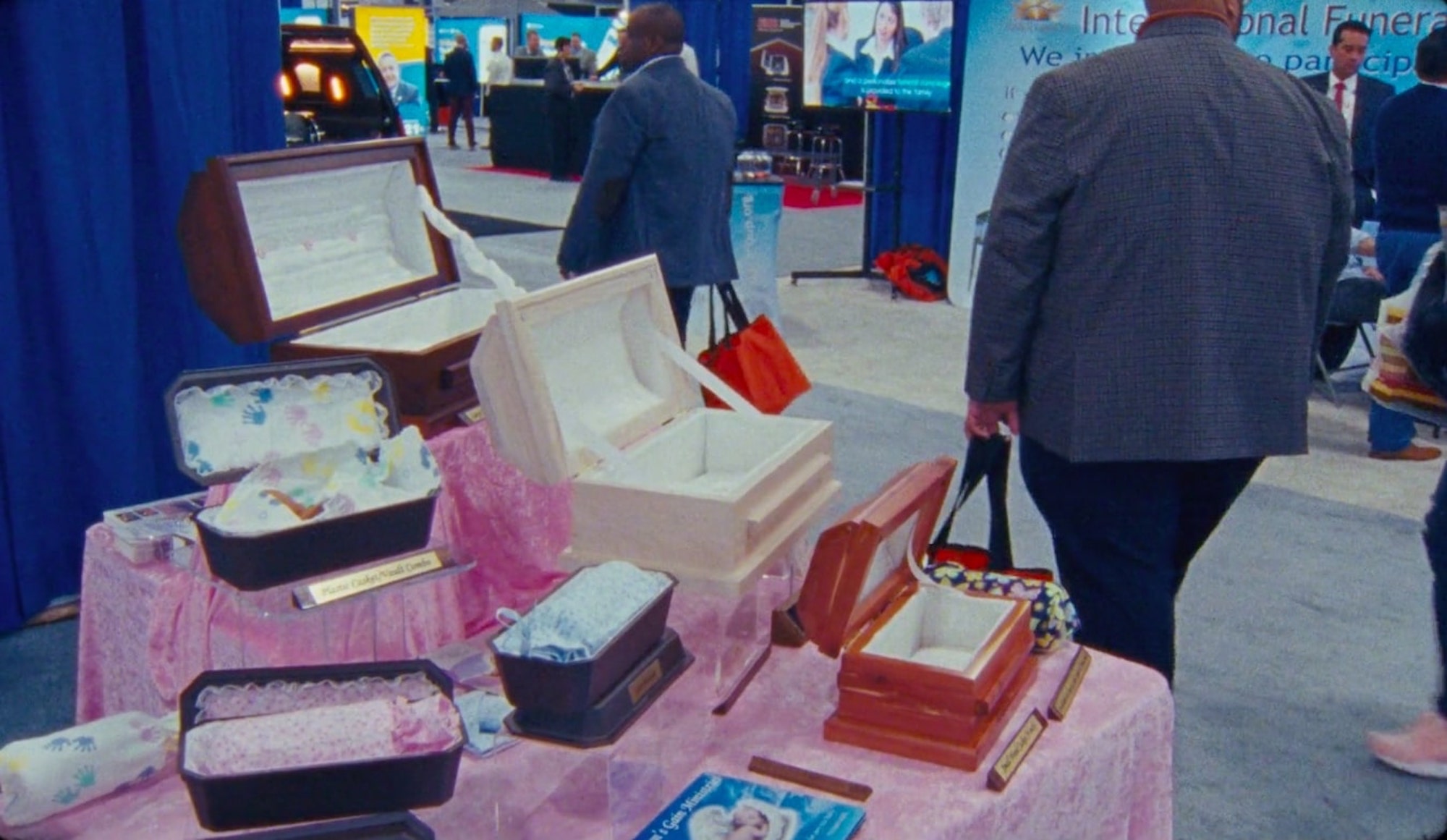 That melancholic tone happened when we interviewed the husband and wife who own this company whose whole thing is to make caskets for premature babies because there were no ways to bury them. So when we were interviewing her I was going: “Wow, this is getting kind of real.” The shift happened at that point, then me and the editor found the arc within that moment.

Selling Death does have a lot of dark humour to begin with. Do you think they use this as a way to soften the reality of death and did you want to reflect that in the film itself?

It softens the elephant in the room by adding this element of humour. A lot of the time people in the industry do that to open up a conversation. Like there’s the one guy who is responsible for shipping caskets and he came up with a goofy mock-up of himself as a superhero. There was this one kid I was interested in speaking to, and he wasn’t really giving me anything so I was just like: “Hey, sell me these caskets.” So there’s this montage where he’s going through all the features and all the specific things popular with women. It was a weird mixture.

When you work in such a dark industry you’re closer to the idea of death every day.

There’s a conversation where someone talks about getting a lot of business after a plane tragedy and being very conflicted about that. What’s it like hearing that?

He didn’t want to say it so I actually called “cut” on the camera. I was asking if it felt right to be profiting off death or someone’s loss. He kind of passed on the question but then he came back to it, and he said that fifty people died on the plane and it was terrible. It surprised me because the tone of the interview was nothing like that at all so that was another shift that happens in the film at that moment. 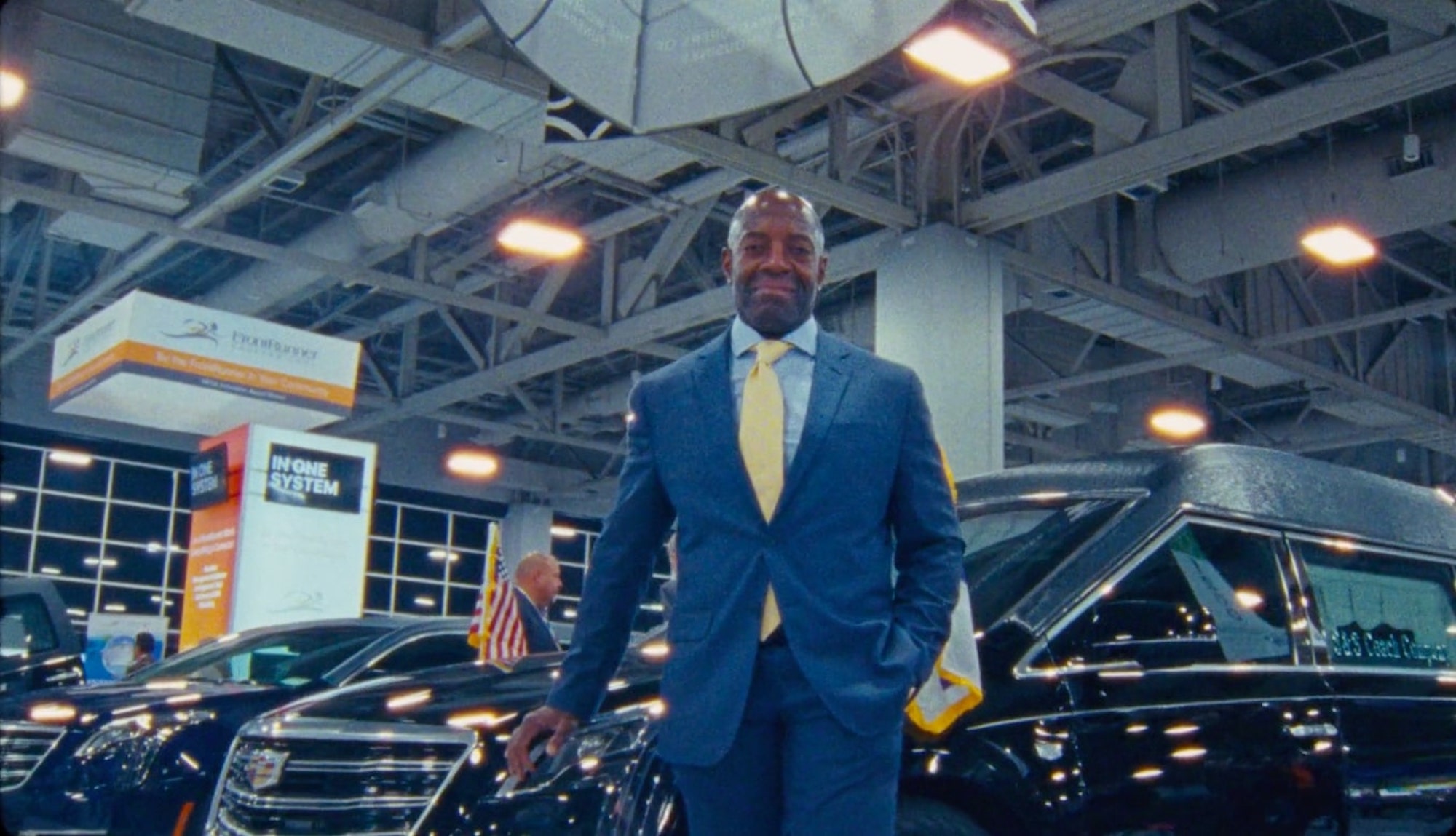 Exactly. The title comes from that. It’s gaining off someone’s loss and profiting off death. Is there a respect there? Does it feel morally correct? I don’t have the figure off the top of my head, but the industry is worth multiple billions of dollars. I don’t know if you’ve had to bury anybody but it’s not cheap! I was curious to see if a lot of these people are just trying to profit off of it and maybe some were! So I was curious to see what I would discover along this whole thing, but there were people who were really invested in it. The gentlemen at the end who got emotional were obviously invested, as well as the couple that does the premature caskets. There are people doing it for the love of it as well as the salesmen types.

Are you working on anything next?

Yeah. I’m working on a short film, and when I’m not doing personal stuff, I’m directing commercials as well. I’m currently working on pitches with brands. But no docs! I have ideas of course but nothing in pre-production yet for documentaries.