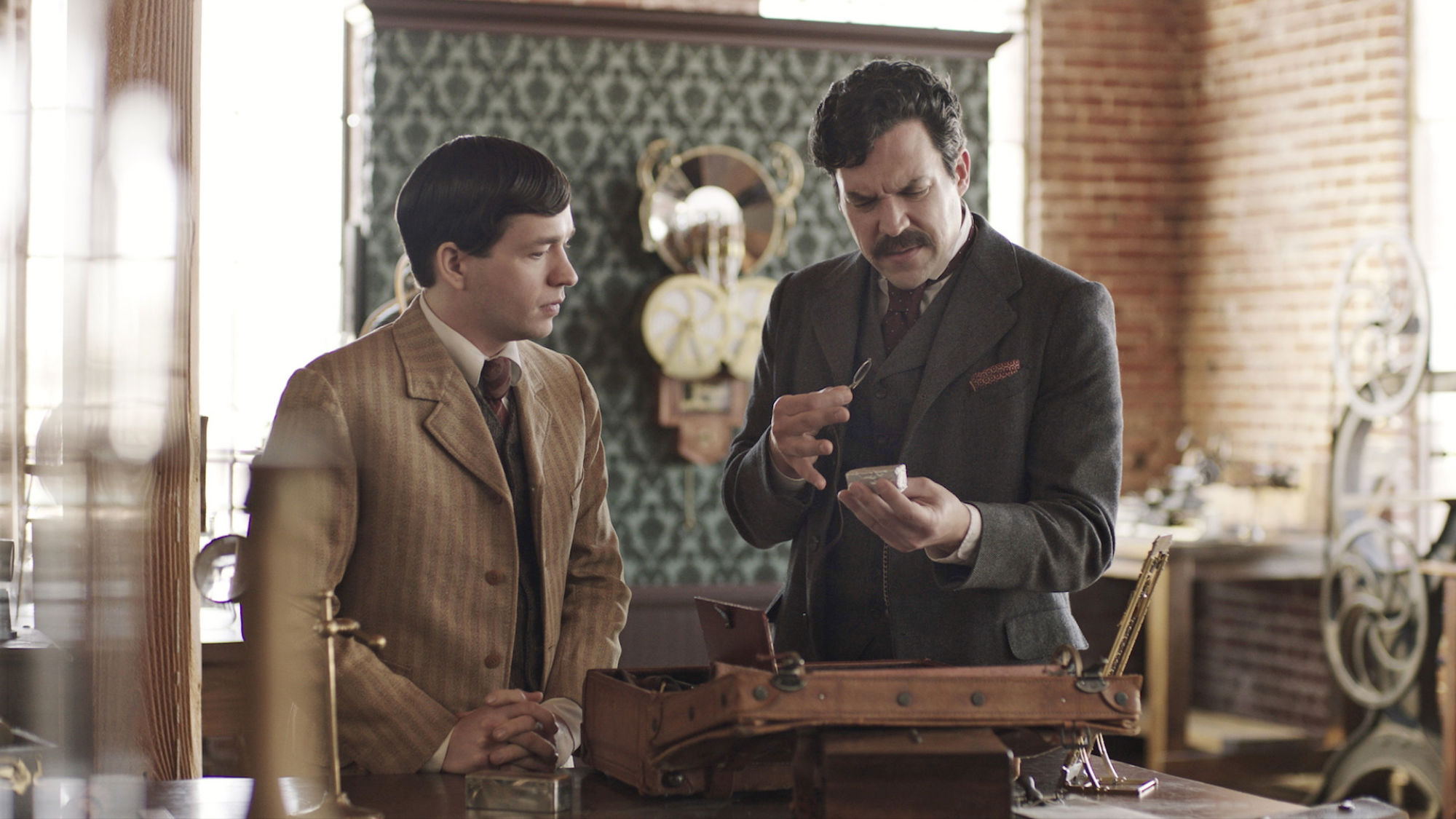 Hubert Moss ‘thinks’ he’s a genius. He has created the illuminatra, a convoluted device that allows one to mechanically light and snuff out candles. Electrical light? A mere fad. His inability to move with the times comes into sharp focus when a young acolyte, armed with a bunch of brilliant inventions, asks to work in his office. Frank Todaro’s period comedy Men of Vision cleverly skewers pomposity while allowing us to imagine alternative futures. We talked to the writer/director about casting his two leads, doing tons of research for the film, and why the topic is rich enough for a television series.

What made you want to tell a story about inventors in the early 20th century?

I very much wanted to do a period film and it was a bit of a folly considering I was asking people to do it for free. What I loved about it is that there was an opportunity to tell an interesting and comic story against this lush background. The story seemed for me to be this opportunity to have this idiotic blowhard who is insisting on going backwards when the pathway forward seems obvious. This theme has been grating for me in the States for quite a while now, so it seemed like a nice way to serve up a bit of commentary.

The idea of it being a period where actual science and bullshit are overlapping quite freely was really a rich territory.

It was my invention, which is to say, an idiotic one. But I also did a mountain of research. So much so, that I think this is a television series. There is so much fabulous stuff going on and it mimics this moment in a lot of ways. There’s this technology flying forward and some of it is astonishingly useful, and some of it, is just people trying to invent something that turns out to be short-lived or useless. The rationale of the illuminatra for example is you can put this anywhere and snuff it out easily with a switch. So the idea of it being a period where actual science and bullshit are overlapping quite freely was really a rich territory.

For example, he talks about a radium drinking water dispenser. There’s a whole story of a famous rich playboy golfer who drank it because he injured his elbow. It affects your bone marrow in that your body starts making a lot more blood cells. It’s not full Chernobyl but it makes you suddenly feel like Donald Trump after getting steroids. He drank it copiously over a few years so it’s a crazy story; charlatans are able to thrive if they’ve got some way of convincing people it’s legitimate. 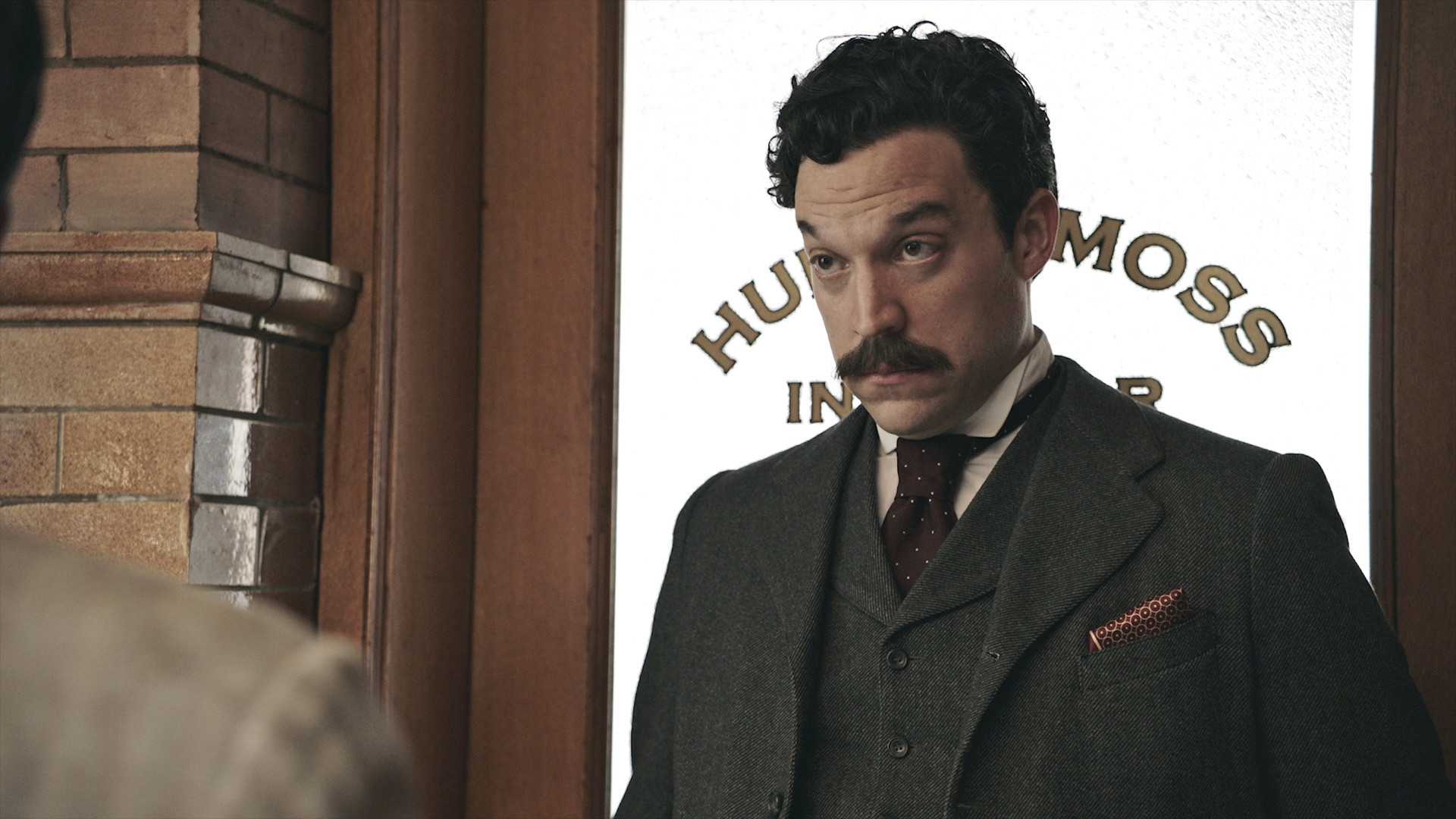 Both Aaron Serotsky and Bryan Burton have such great comic timing and make the dry humour of the film sing. What was the casting like?

When I wrote this I thought; “I can’t quite put my finger on any of the people who would occupy this wonderful pomposity and also have this crackling intellect underneath.” In the case of Hubert, the dense, antiquated (and scientific) language required an actor who had a obvious sort of erudition to him in order for it all to feel natural; a lesser actor could have memorized the words but it would have sounded sound as if we had shoved them into his mouth. I gave the script to my friend David Shane, a great writer-director. Thankfully he liked it and said: “I think I know exactly the right actor for this.” In my mind’s eye the character of Hubert was a little older than Serotsky. But when he said, “Here’s Aaron, we should look at him”, I could see this for sure.

Then I was like; “I need to have someone who is still younger than him”. I had seen Brian do some other stuff. He was so subtle and had this great look about him, this sort of ingenious quality, where you could sort of imagine him admiring this other guy. I have to take my hat off to them. I was in Los Angeles, they were both in New York and I didn’t get any chance to work with them at all. They got together maybe once to read lines without me. Then they showed up in Los Angeles because we were doing this for free. They showed up and we went straight in. I think we averaged about two and a half takes. They pulled off this dense and antiquated language with a minimum of flubs. Thank god, otherwise we would never have made the day.

How did you achieve the floating effect of the cart?

Thankfully from working in commercials, I’ve made friends with some extraordinarily talented people. A friend of mine made the illuminatra for example. I was able to cajole my friend Doug at Method Studios to do a bit of CG work for the cart. We had this cart that we pushed down onto this little track. Once it lifts off the ground, that is basically a model of that same cart.

It feels weirdly like a pilot for something; it’s about the length for a thirty minute show.

We were able to photograph the cart in such a way that you could take all the skin off the actual thing and apply it to a 3D model. Then we had a proxy for Brian to be holding, a piece of wood with two bars that was hanging there on ropes so he could reach up and grab it. At that point, whatever he’s grabbing is integrated into the CG cart. So it just needed to be brought down on top of him. We don’t drop it the entire way, just enough for him to have his action and land on a mat. Then those guys drop the computer generated cart on him.

What I find so fascinating is the way that the short allows you to imagine alternative futures, how the world could’ve been if certain inventions were popularised. Would you want to expand this in a TV series?

God, I would love to. There are things that you find along the way where you’re thinking: “Oh god, that would’ve been amazing.” For example, in around 1918 an inventor had devised a levitating train. He figured this out a long time ago, but it was either too expensive or he couldn’t get the traction behind it. That was sort of Hubert’s take on Walter’s inventions. He’s looking at stuff and going: “That’s a perfectly clever idea but in reality it doesn’t make sense.” Then there were also spiritualists who were able to convince really smart scientists that they were able to do stuff. So again, it’s this space where scientific phenomenon and bullshit overlapped very fluidly.

I am really eager to get this developed. I had never intended it to be a TV series. I hadn’t written it as a proof of concept but after I screened it for a few people the response was: “I would really like to see more of these guys.” It feels weirdly like a pilot for something; it’s about the length for a thirty minute show.