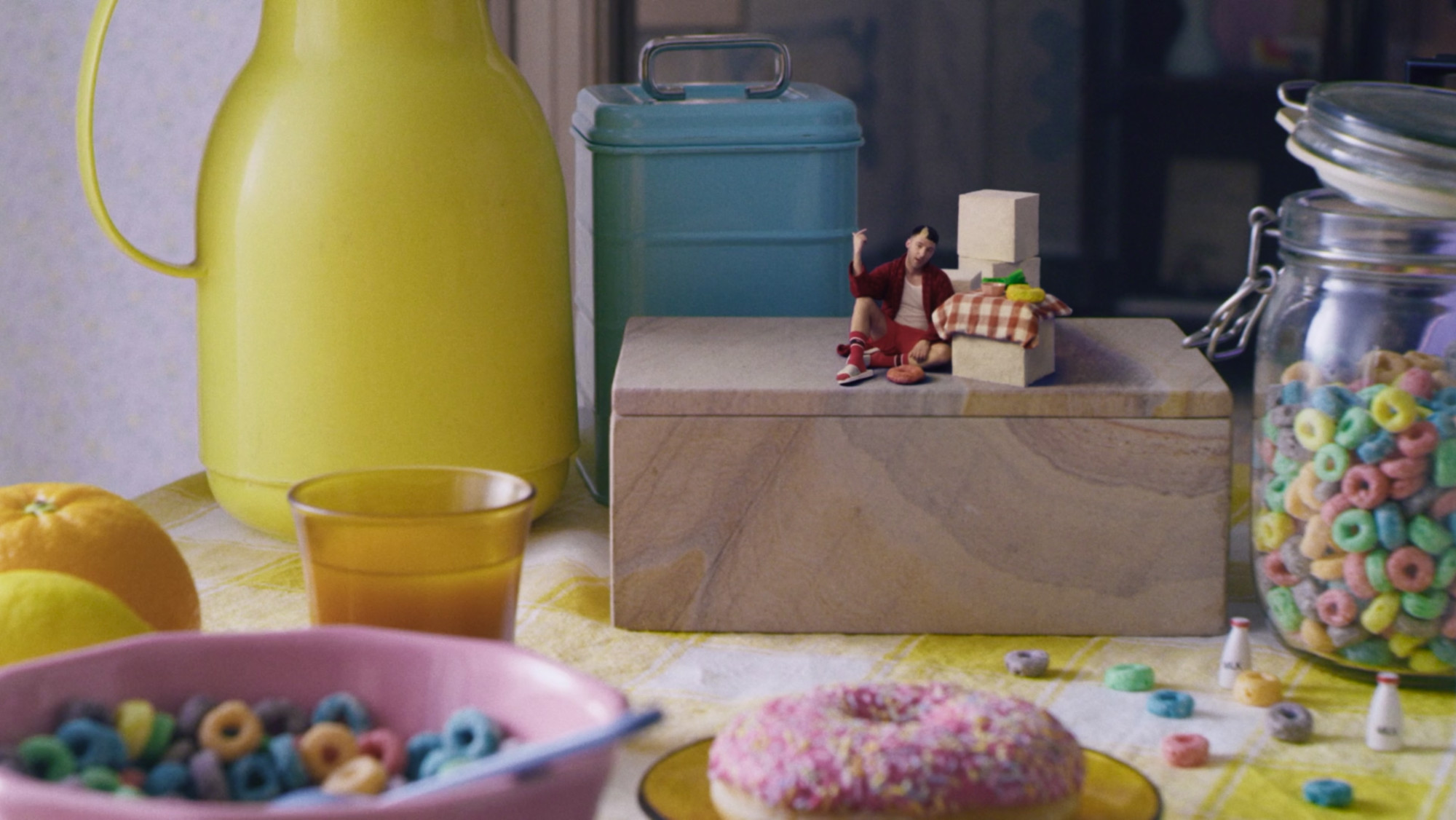 Relationships are never straight forward, nor are they underrepresented within the realm of music videos. Stepping into that crowded field but from a playfully novel perspective comes Pere Sala aka Spxxn P with Complicació (Complication) – a music video which immediately integrates us into an imaginative micro world where the tongue in cheek struggles and power dynamics of a relationship play out as literally as they do metaphorically. DN spoke to the Spanish director and hip hop artist about the inspiration for shrinking himself and his roles both behind and in front of the camera.

Complicació sees you as director, artist and performer, what made you want to take on that multi-role challenge?

After the production and release of my first video Ego I was fortunate enough to start working with Catalan record company Kasba Music. As a result, I had the opportunity to make a project with a larger budget and we were able to make Complicació. In the favourable position of artist and director, I was really able to focus on the visual style that I wanted to represent. I also wanted to emphasise in the video the irony and the humour which is implied in the lyrics. I wanted the images to provide an alternative perspective that could differ from the standard version the audience or listener might come to if only hearing the lyrics.

Why did you choose to have your character inhabit a miniature world?

The lyrics could be interpreted as relatively infantile, particularly during the chorus where I am essentially begging the girl not to find another man. This is where the origin of the concept of ridiculing the main character came from. I wanted him to literally be smaller than the girl. It also represents the different characteristics of each person which can frequently cause conflict in a relationship. Once I was clear about the concept and what I wanted to say, my co-writer Laia Soler helped me to structure the script. We wanted to maintain a fairly linear structure so that the viewer could understand the story without the need to understand the lyrics. We both felt it important that the two stories complement each other.

In the favourable position of artist and director I was really able to focus on the visual style that I wanted to represent.

Did you encounter any particular problems from directing as well as performing?

Pre-production and filming were quite tough since we had a small budget for everything the piece asked of us. Whilst I was in front of the camera and all the creative weight and the final decisions on the budget fell on me, I had a fantastic team who were dedicated to the project and I am so thankful for all the effort they made. Most of the team are people with whom I usually work with and we have an established relationship. Due to the fact I was often in front of the camera, I asked Agueda Sfer to help me in the filming process by co-directing with me. I also had fabulous director Lucia Alemany who helped me with the acting by preparing the scenes a few days before the filming which lasted 3 days.

How did you go about the creation and filming of Complicació’s dual perspective worlds?

On the first day, we shot the whole world of the miniature scene and my room, which was built to life size. The art team, led by Júlen Biguri, did a spectacular job building the entire set and recreating some giant-sized objects. The design of my room is inspired by Memphis design and the spaces used by the actress were inspired by a 60s and 70s aesthetic, but with a very free interpretation. We wanted some of the more obvious differences to be shown by the colour palette and styles between the two worlds of the two characters. He is represented by more primary colours and she by more pastel colours.

On the second day we shot all the locations for the actress, played by Lydia Monterde. The last day was dedicated to the chromas where I was recorded and then shrunk and inserted into the shots that we had already had. For filming we used a Red Gemini camera and a Zeiss Standard 2.1 lens. I worked with cinematographer Thais Català and we did several camera tests in order to analyse which shots and which optics helped us to create the sensation of the difference in size between the two characters. In some sequences we used macro lenses to roll between the vegetables or put the camera inside the bottle. We knew our focus was from the point of view of the protagonist.

Unfortunately we are all too familiar with filming being adversely affected by the global pandemic, did you run into any issues with this project?

As I have already mentioned, we did not have the largest budget and we ran into some unforeseen events during the filming which meant we had various retakes needed in the middle of the COVID-19 pandemic and we had to wait almost 3 months before being able to shoot these. I do remember that a few months were a bit exasperating for me because I didn’t know when the restrictions were going to end and the video was almost finished apart from 4 or 5 shots meaning we couldn’t close the project.

Despite all of this, by having so much time to think about the retakes, we were able to edit the entire video and we realised that a few things were missing. There are some shots that we might not have done if it hadn’t been for all this dead time we had. Examples are the shot of the mountain of Colacao or the detail shot of my mouth sucking the hose in the dream scene when I see the actress come down to my size.

What projects are you working on now?

As a result of this music video, I have started working with Sauvage production company in Barcelona. I am very excited because it is a production company that I love and I cannot wait to see what we create together. I am always open to new projects that can be proposed to me. I really want to make a music video for an artist who I admire and where I can focus on just directing.