When a filmmaker returns to Directors Notes it provides a perfect opportunity for reflection. Not just a time to reflect on our platform, and more personally my interviewing style, there’s something gratifying in watching a filmmaker you’ve championed and supported improve and mature. I was instantly impressed with the filmmaking of today’s Director Connor Radding when I first saw his work as part of the Manchester Animation Festival back in 2018. A young animation student with a standout style, his earlier film Flytrap showed signs of a blossoming filmmaker and unusual storyteller and it’s good to see this first impression confirmed in his thesis film The Midnight Sun. A cinematic and narratively intriguing piece, Connor returns to DN today to premiere his latest short film and discuss how cellphone towers, live-action and the isolating process of production, all felt inspirational in his animated short.

Hi Connor, welcome back to Directors Notes – can you introduce your new film to our audience and tell them about the story at the heart of The Midnight Sun?

Happy to be back on here! The story itself was first created through discovering a set of photos of unconvincing cell phone tower trees in the wilderness. Back in 2018/2019, I was struggling for a while on what to make as a thesis project, but for some reason these photos sparked an interest. The purpose for why these towers were designed was what I was less intrigued by, but rather how they provoked a sense of unnatural mystery in a natural environment. A feeling of being watched.

It’s a story about loss and searching for meaning, in an environment that doesn’t provide many answers.

It was a much more atmospheric approach to creating a short film, but I knew this could be a starting point for me, and it was an organic development process. From there, crafting a story with the theme of isolation and creating a character who spends their day-to-day in the wilderness seemed to fit. After some more research, I used these pieces to dive into the internal state of the main character. I guess on a deeper level, it’s a story about loss and searching for meaning, in an environment that doesn’t provide many answers but only enhances her internal thoughts.

Last time we spoke to you we were talking about your film Flytrap, there are some similarities to that film in The Midnight Sun, but this new film feels more ambitious and more advanced, what did you learn from making your previous film that really helped to improve your filmmaking and make the next-step-up?

Wow, I learned a ton from Flytrap. In regards to just filmmaking in general, a couple things. One, it was my first film that helped me build discipline, and from there just having a consistent drive to make something you want to make as an animator. The second lesson was just learning how to fulfil what you visually have in mind for a short film in a way that feels specific to you. The second lesson mainly just stems from the first lesson – lots of discipline/consistency to eventually create what you truly strive to show visually. 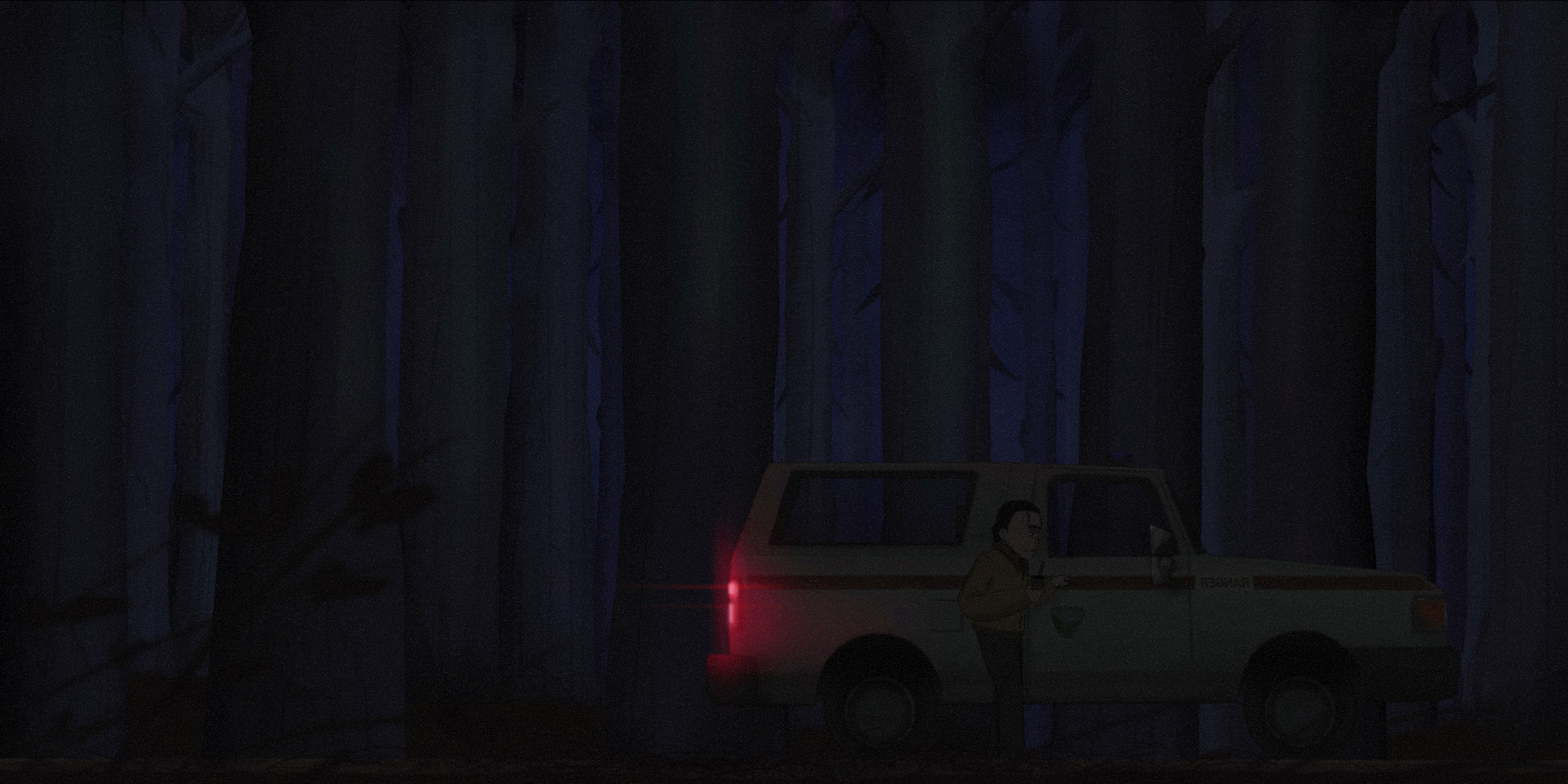 I guess one of the main similarities behind this film and your previous short is the theme of isolation. With the main characters of both films somewhat cut-off from the world, what is it about this subject that you want to explore in your stories?

I think the deeper subject behind these films is definitely more of a personal one than what they visualize on the surface. Both films, The Midnight Sun in particular, were an incredibly isolating experience to produce. While I wouldn’t necessarily define a film’s ‘merit’ by the filmmaker’s process, I think there’s still something to be said about how these characters feeling cut-off from the world stems from similar feelings I had making this film. It’s something I guess I don’t think too much about until I finish it and take a step back!

When you’re too busy lingering on an internal issue, it’s difficult to feel present in the environment around you.

With the main character in this short, she faces a loss that she has trouble comprehending, and through these quick flashbacks you get a glimpse into how she is feeling. In the moments where she’s a park ranger, she’s searching for answers through any visual or auditory motif she can find. When you’re too busy lingering on an internal issue, it’s difficult to feel present in the environment around you.

There’s a very cinematic feel to your short, with cutaways and film language feeling like it’s inspired more from live-action than other animation, can you talk to us a little about the inspiration behind your aesthetic and what you were aiming for visually with this film?

I’m definitely inspired by several live-action tendencies. I think with the cutaways specifically, I focused on not leaning on music to drive the emotional flashback beats, which was more of an experimental decision. I wanted you to feel immersed in the character’s head, and I felt that sound design, instead of music, was a better option.

The cutaways were quick and occasionally abstract in order to capture both a feeling and the mind of the character. Visually, this is by far the most detailed work I put into the background and the nature. I wanted to help make this world feel identifiable, which would in contrast make some of the few abstract/unidentifiable moments in this short stand out.

Looking through the credits of the film, you’re very much a one-man band when it comes to production, with only the voice-acting and composing done by others. Is there something that appeals to you about working in this fashion or do you feel as if it’s more forced upon you?

For me, I was keen on doing this short on my own since I wanted the production to feel consistent throughout. It also helped me understand the process of every aspect of filmmaking, and I can use that to better communicate with different film departments from now on. However, I’d love to collaborate with others in the future with regards to developing new ideas through writing and storyboarding.

This short feels my own and nothing felt forced upon me to do this myself.

What’s nice about the school format is that everyone tends to have their own unique narrative voice and artistic aesthetic. Bringing someone on to learn a distinct aesthetic, at least in school, was not something I had the bandwidth to teach, so I was completely fine with doing this short on my own. I think I would need to adapt to a more traditional production format in order to get others on the same page. At the end of the day, this short feels my own and nothing felt forced upon me to do this myself.

With that in mind, a lot of importance is obviously placed upon the voice actors in the film – how did you work with them to ensure you got effective performances?

I worked with Voices.com to help discover the voice actors for my film and it was luckily a pretty smooth process. I gave every character a document with a brief layout of who their character was and their attitude. For the main character Allison in particular, I wanted her not to sound so expressive, but actually quite tired due to the sun and a lack of sleep. Keaton Talmadge did a great job capturing the demeanor of the character I had in mind. With the younger version of Allison, the other voice actor, Dana Miller, did a nice job at capturing the inverse of that demeanor (eager, playful).

The Midnight Sun was your grad film from UCLA Animation, how important was your time there for your filmmaking and what are you working on next? Any upcoming projects we need to know about?

UCLA Animation was the perfect environment for me to generate my own voice artistically and narratively. They give everyone a lot of freedom to create what you want and I really respected that.

I’m currently working at Santa Monica Studio as a part of the narrative team on the next God of War title, and have been there since I finished school back in 2019. I actually finished this thesis film while being mostly full-time at the studio, which was a huge challenge. I did do a stint where I was only working part-time for a few months. I don’t think I would’ve finished this film had I not gone part-time, so having that brief time off was invaluable and gracious.

I’ll go back to short films when it’s time.

In regards to personal work, I’m still pretty burned out from this short film so I’m gonna take a bit of a break from producing narrative pieces in a film format. I’ll continue working on still pieces like illustrations or paintings. I’ll go back to short films when it’s time.