The feeling of disconnect caused by digital communication is a subject well-explored in the short film arena, so if you’re going to tackle these themes make sure you do it with a fresh perspective. Injecting life into their story with the inclusion of an emotionally engaging satellite, co-director Frederic Siegel (who helmed the film with Benjamin Morard) joins us on Directors Notes to discuss celestial sci-fi short The Lonely Orbit. A film with a relatable narrative and a striking aesthetic, Siegel reveals the inspiration behind his story and the process in bringing it to the screen.

Thanks for joining us to discuss The Lonely Orbit. I saw the film on the festival circuit a while back and it has really stuck with me since. One of the aspects of the short I really enjoyed was how it had quite a futuristic, sci-fi feel, but the narrative feels very grounded and relatable, can you explain a little about where the inspiration for the narrative came from?

I developed the story shortly after graduating from Lucerne School of Art & Design in Switzerland with my short film Ruben Leaves. I realised, how hard it is to keep friendships alive over a distance. After being together with my friends almost every day during my studies, everyone is following their own paths now, moving on to new lives and different cities. Most of our communication automatically shifted into the digital realm.

I’m figuratively floating in an orbit around my own friends.

Somehow this made me feel like a satellite; being constantly connected in a virtual sense, but actually separated over huge distances. I’m figuratively floating in an orbit around my own friends, who are holding me close with their gravitational pull and I’m anxious not to cut the digital cord, which is tethering me to them. We tried to visualise this feeling in the story of a satellite operator and his satellite, both trapped in their literal and metaphorical orbits, longing for real, physical connections.

Centred around loneliness and isolation, the themes of the short feel even more topical in present times. What was the main message you were hoping your short would convey and do you think that message has altered at all, considering the changes we’ve all encountered to our lives?

The initial aim of the film was to make people more aware of their use of modern communication technology and the impact it actually has on their behavior. It became really easy, and normal, for humans to be permanently and globally connected, developing a natural need to grow and maintain a bigger and bigger social circle. We send hundreds of messages every day and call each other over huge distances, while it feels like communication in the real world got less important over time.

I think the global pandemic is accelerating this development, getting people closer together virtually, but separating them even more physically. On one hand, I love that everyone I know, basically lives in the palm of my hand right now and I can reach out to them anytime I feel lonely. On the other hand, I never felt that a digital conversation is a replacement for a real-life, loosey-goosey exchange of thoughts over a few beers in a smokey pub. I also don’t like to sit in front of Zoom calls all day, or even having conversations with friends through a screen. It still feels deeply unnatural to me and it’s hard to think how this could replace a physical interaction.

I think we need to realise, now more than ever, that digital connections are not replacements for real connections. They are just supposed to be handy tools, helping us to stay in touch with a real human on the other end. They are not the connections themselves. They are not keeping us from feeling less lonely. And we should never forget that, no matter how long this situation lasts.

I’ve watched the film a couple of times now – at festivals and on my computer – and one thing that constantly impresses me, is how invested I actually feel in the satellite. You do a great job of making it feel alive and full of emotion, was this always in the plans and if so why?

Actually, the first visual ideas for the film were the two images of a satellite in space, burning up in a huge fireball and a man walking through a bar, burning up in the same way. I was intrigued by the metaphor of a human, living his life mirroring the life of a satellite, even sharing its fate of gloriously bursting into flames in the end. After that we started to find narrative cues, that connect satellites and humans, to build a story around. Finally the topic of loneliness and being connected to your friends via smartphone resonated with both of us.

In the beginning, we wanted to tell the story in two completely separate parts. First, the whole story of the satellite, losing connection and trying to reestablish it by dropping himself down to earth. The second part would have started immediately after the crash, with a puzzled satellite operator in the control room, going through his own narrative, metaphorically mirroring the story of the satellite.

So the satellite feels more emotional, because we projected its story on the human, not the other way round. It was always the plan to convey the operator’s loneliness and longing for connection not through his own eyes, but through the eye of the satellite, so to speak.

Visually, The Lonely Orbit is a really striking film, it would feel like I was doing it a great injustice by not discussing the aesthetic with you – can you explain your workflow with us, what tools/methods did you use to create the film?

This could be a topic for another 20 page interview, but we’ll keep it short 🙂

For The Lonely Orbit, everything started with writing scripts, to get the basic construct of the story right. There were a lot of different iterations of the script in the beginning. Then, before we started storyboarding the film, we constructed the whole film on a physical board with hundreds of tiny thumbnail drawings. On the board we rearranged and built whole sequences in a very fast way, structuring the narrative as we went on.

From there, we jumped into Adobe Photoshop and Adobe Premiere to draw more sophisticated images to finally put them together in an animatic. Next, we split up the scenes for animating traditionally in TVPaint. Then we moved on to additional animation in Adobe After Effects and finally to compositing, also in AE.

Working together as duo, how did you share directorial duties and what do you feel that partnership added to the film, that wouldn’t have been there if you were working alone?

In preproduction, Beni and I worked together to develop the story. My initial idea for The Lonely Orbit was only based on a visual (which I already explained above) and a vague topic of loneliness. It helped massively to work together with Beni, crafting a narrative around the images. It was very freeing and eye-opening to just talk about the themes. We also worked together on the storyboard, each of us drawing different sequences, interchanging and combining during the process. 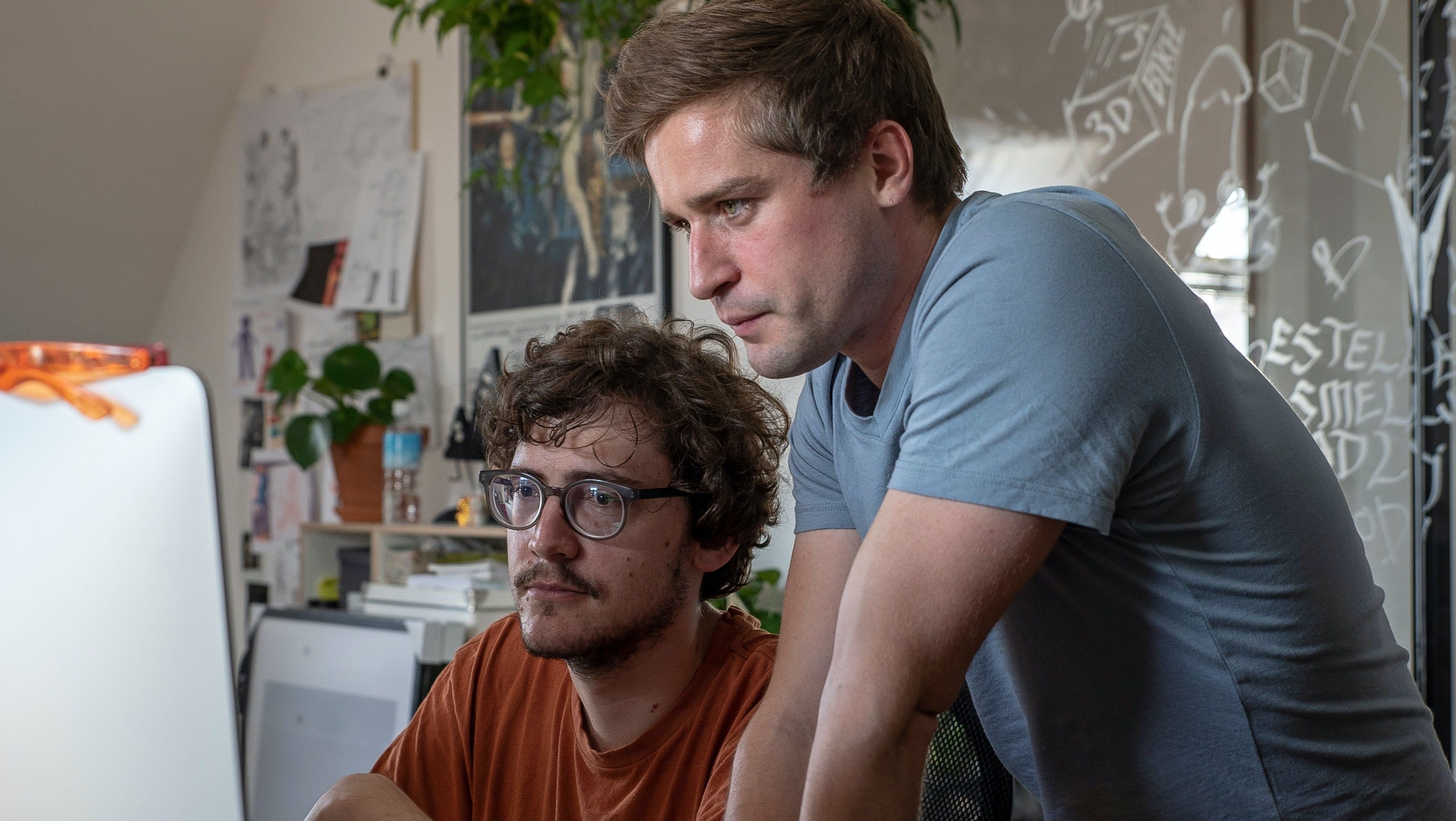 One of the standout aspects of the style for me is the colour palette, the combinations you use work to give the film a futuristic feel, but also make the environments feel a little cold and clinical, what prompted you to use these colours?

The concept of limited colours is initially based on my previous film Ruben Leaves, where I used a bold blue and yellow color scheme. For The Lonely Orbit we tried to create a softer and more graceful look with a more cinematic blue, orange and white palette, additionally inspired by the dawn of computer graphics, where restricted colour palettes had to be used, due to the low amount of memory capacity.

The weird colour combination in Ruben Leaves gave the film a certain feel of uneasiness. But the emotional story arc in The Lonely Orbit is more complex. So we wanted to somehow distinguish between the satellite operators feeling of being lonely in a crowd, and his cozy feeling of being connected to his friends. To support this, we use the clinical whites as the dominant colours in the control room to underline the impersonal environment and warmer blue tones for the bar scenes to make it feel cozy and homely.

We gave certain feels to environments through the use of light.

For the same effect, we applied the warm blue colours to the space environment, making it more soft and familiar. Usually in movies, space is portrayed as a very dark and cold place, with black as a bottomless back-cover. In addition, we gave certain feels to environments through the use of light. For example in the case of the satellite operators flat, the white walls make it appear more cold when the lights are on, but when he turns the lights off, it covers the setting in warm blue colours, giving it a more cozy and friendly vibe.

The soundtrack is another noteworthy area of production, how did you go about working with Murat Ombombe to create the score and what do you think it adds to the overall effect of the film?

We started working with our friend Luc Gut (aka Murat Ombombe) in an early stage of production. He composed rough drafts of the music for the very first animatic, which helped us a lot in getting a feel for the film’s rhythm and for the character’s emotions. From there, it was a back-and-forth, us reworking the edit and Luc refining the music at the same time. Luc also contributed the digital sound effects, like all the bleep and bloop sounds for the computers.

From the beginning, we agreed that we want to have a very minimalistic, synth-based soundtrack, inspired by electronic music pioneers like Laurie Spiegel. The very simple and repetitive sounds mimic routine and the cold side of the story, while also having a warm and melodic sub-tone to represent human connection.

The final track is actually an existing piece of music called Seabed Meditation by Norm Chambers, which we discovered in an early stage of the development process. We fell in love with the song and decided to use it in the film, as it fits the ambiguous, melancholic climax just perfectly.

Thanks for joining us today, everyone at Directors Notes is really excited to be featuring The Lonely Orbit. Finally, can you tell us anything about any new projects you’ve got in the works and where our audience can go to follow your work?

Yes, I’m very excited to announce that I’m the middle of developing a new short film, for which we received development funds in Switzerland. It’s a story about two police officers, investigating weird incidents happening in an apartment block, triggered by a little boy’s excessive TV consumption. I’m writing and directing it by myself and it will be produced by Marwan Abdalla Eissa at Team Tumult again.