There are certain stories which stick in our minds, resonating with us throughout our lives and sometimes from these half remembered seeds, a new story grows. Director Kyomu Yoshida has taken a fable from his youth and combined it with animation techniques garnered from younger years of playing around with equipment to make distinctive short Rope. It’s a film which very much speaks to our now by drawing upon the morality of an age old tale to reflect the present situation in modern day Japan. DN invited Yoshida to delve into the formation of Rope, pulling inspiration from the father of the Japanese short story and his desire to bring this conscientious style of social commentary to audiences.

What was your inspiration for such a stark tale?

The work is inspired by The Spider’s Thread, a short story by Ryunosuke Akutagawa, a renowned Japanese author. The Spider’s Thread is about Kandata, who fell through to the Hell, and Buddha, who hangs a spider’s thread from the Heaven for Kandata to save him. I read Spider’s Thread in a Japanese language textbook when I was in the 5th grade of elementary school. In Japan, this is a widely known narrative. Under such circumstances that we find ourselves in now, I wanted to produce a piece of work that reinterpreted this story, so I started this production.

When I saw today’s Japan through Akutagawa’s story, the present situation looks just like the Hell depicted.

Have you always wanted to make a film which explores these areas of society, why did you choose such a contentious topic?

I’m currently working in a part-time role at a newspaper company. Through this role I am privy to pertinent information on various social issues both here in Japan and worldwide. I wondered if I could create an animation that incorporated social themes so I started this work. When I saw today’s Japan through Akutagawa’s story, the present situation looks just like the Hell depicted where political corruption has become normalcy and the economy continues to suffer heavy blows. This observation motivated me to create Rope.

Claymation is notoriously time consuming, why did you choose this specific style for your film?

Since I was little, I borrowed my father’s camera and made animations using Lego blocks so I’ve always been accustomed to stop-motion animation techniques. I wanted to make the film using clay animation, in which dolls made of stone powder clay are moved and shot frame by frame on a set made of cubically assembled pencil drawings. In addition, when I started making clay animation, I came to admire the works of masters such as Jan Svankmajer and the Quay brothers.

And how did you augment that with 2D elements?

While exploring new forms of animation, I came up with a way to combine 2D hand-drawn animation with the 3D clay animation. For example, in Rope, this technique is used in the scene where the old man tells the story of The Spider’s Thread to the main character while there are Lotus flowers blooming on the wall behind the two dolls.

You’ve mentioned that this was a year and a half long project. Did you work with anyone else on Rope and what part of production took the most time?

Fumitaka Sudo, a friend from college, was in charge of the original draft and logo design for this work. In addition, my father, Akihiro Yoshida, made music using the piano in the play. It took the longest time to make the doll and the art set.

I wondered if I could create an animation that incorporated social themes so I started this work.

Rope was created with the Dragonframe stop motion software, what dictated that choice? 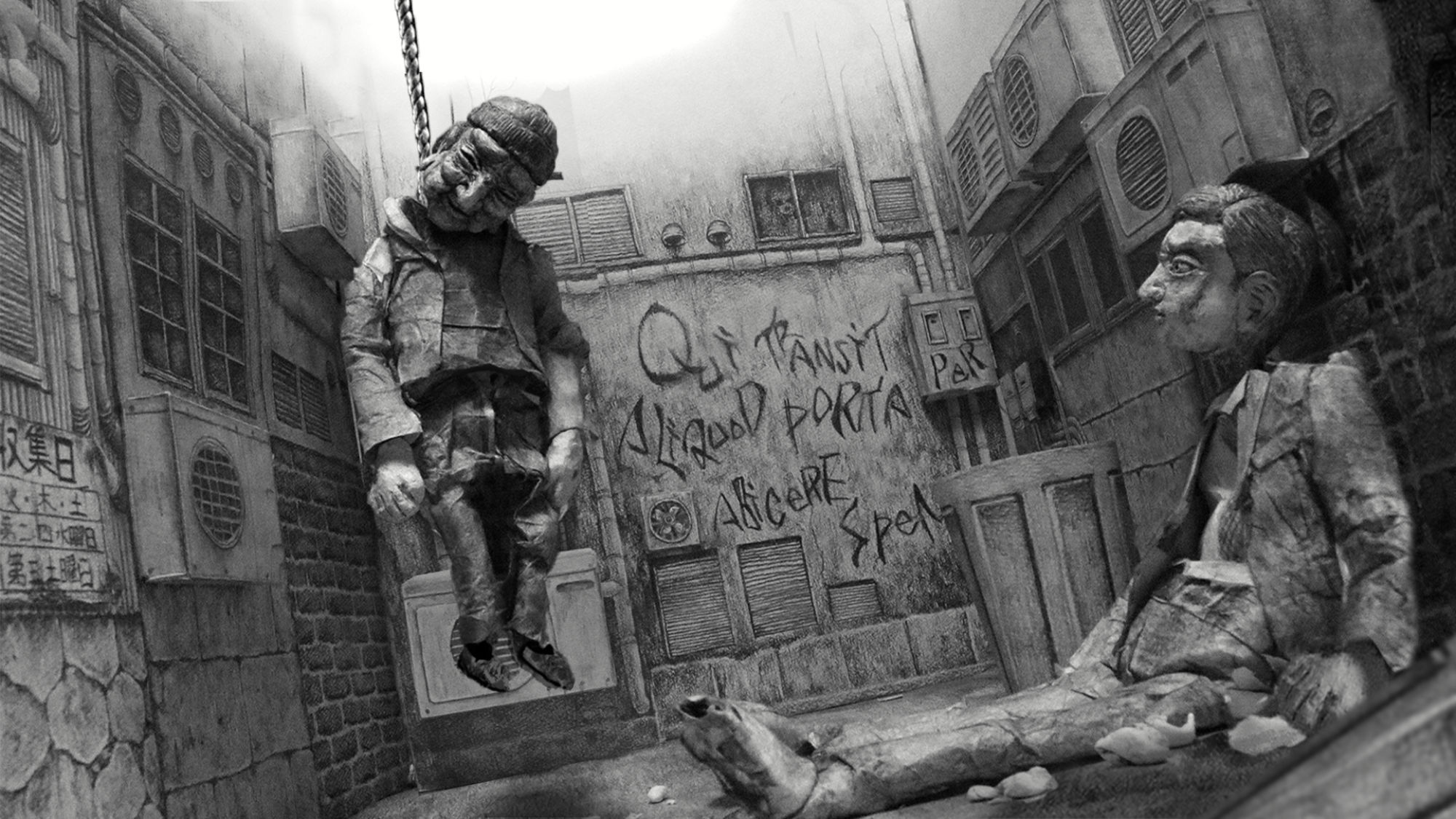 What projects are you working on next?

Rope was a work that ended by telling the viewer, “I think this world is hell.” For my next work, I would like to make a film that appeals, “Even if the world is hell, you must live while clenching your teeth.” It will be clay animation.

Directors Notes is honoured to present the premiere of Rope on our pages today. If you would like to join the filmmakers sporting a fetching DN Premiere Laurel, submit your film now.