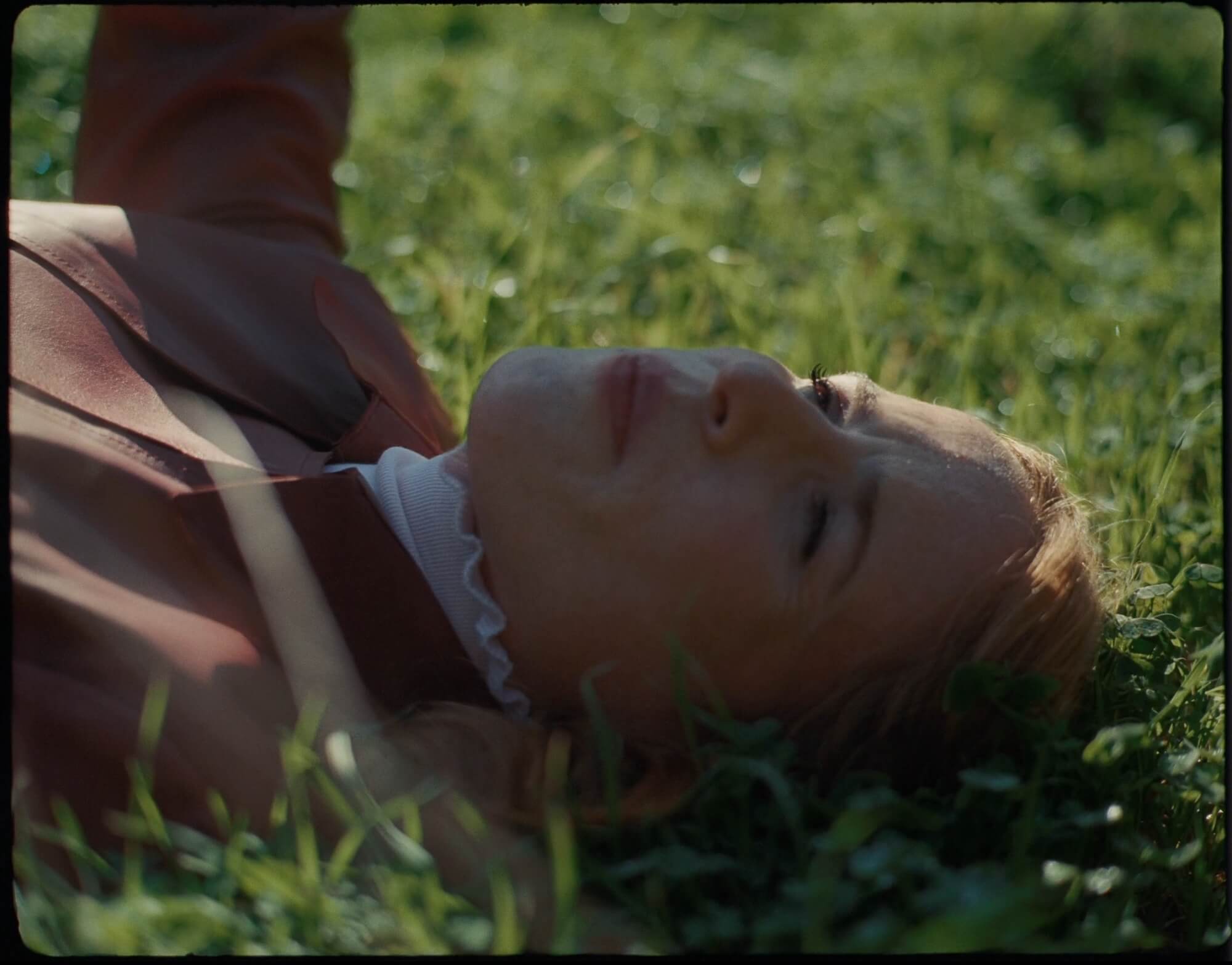 In a sumptuous blend of music and fashion, Director Tiago Ribeiro’s Who is Anna creates a biographical portrait of Metronomy drummer Anna Prior. Ribeiro documents Prior across a series of five words, all of which have been chosen by the musician to define her personal sensibility. The result of which is a unique take on the fashion film, one which achieves the stylish aims of the form whilst offering a more meaningful comment on what it means to be a contemporary woman. DN caught up with Ribeiro to learn about the incentives behind his film, the process of shooting on 35mm, and his desire to create a fashion film with substance.

When you were approached to create this film and how did you first set about developing the concept?

I had previously worked with Máxima. They were looking to do something fresh, and I and our Stylist Claudia Barros decided that we should do something with music. We are both fans of Metronomy and we knew Anna was in Lisbon, so it was an immediate click. Starting there, we knew we had to have Anna playing the drums. Having a female drummer with her personality doing some kind of a fashion film was just too good to miss.

What inspired you to blend music and fashion in the first place?

I would say that 90% of what I do as a director is in fashion. However, music is one of my passions and I guess that it is always very present in my projects and is something that defines my work. So, this time I just wanted to give it a little more relevance and protagonism.

Why was it important to you to create something biographical as opposed to a more traditional fashion film?

There are a few reasons. Firstly, because I guess that most of the time traditional fashion films are kind of ‘empty’, and I think we should try to make them more interesting. Secondly, there is tons of visual content coming out every day, so I guess we needed to have something that captured viewers’ attention. Get to know a person, for example. Lastly, because we wanted something different, an original format that could offer the magazine a new approach to digital content.

We also wanted to highlight the contemporary woman and her narrative in our society.

How did you come into contact with Anna and what was it that made you wanted to feature her?

A common friend made the approach to Anna and she felt that the project was interesting and immediately said yes. Maxima wanted to give a space to someone that feels connected to today’s world. A woman that represents youth and culture. We also wanted to highlight the contemporary woman and her narrative in our society. Anna is that kind of woman and also has this cool look that would make sense for us in terms of fashion.

You shot over a single day near Lisbon, was it a fairly fast-paced shoot? Did you come across any challenges with such a limited timeframe?

Yes, it was a real rush to make it happen. We were ambitious, we wanted to stage five different situations and we didn’t have many resources. A small team that had to make it all happen. The most complicated was changing between sets. We had to disassemble and mount the drum kit, microphones, camera… The last set was supposed to be on the beach but the sun was running away and we had to completely improvise a new situation just next to the previous one. It was shot in about five minutes, I think.

Having a female drummer with her personality doing some kind of a fashion film was just too good to miss.

What made you want to shoot on 35mm for this specific project?

This was actually the idea of Duarte Domingos, our Director of Photography. We’ve been trying to shoot on film for a long time but unfortunately haven’t had that many chances. As we were very motivated about this project, and we wanted it to have a nice look, we decided to shoot on film. Also, it was all natural light, so I guess film helped to make it extra special in terms of photography.

When it came to working out what Anna would wear was that decided by you or Maxima?

Anna’s outfits were decided by Claudia. She had a few ideas about the style she wanted and after our interview with Anna, we just tried to fit the looks to each situation.

Did Anna require much direction from yourself? Was there anything you did to get get her comfortable in front of the camera?

Actually, Anna didn’t require much direction. I just told her what I was looking for in the project and she immediately got the idea. Then for each situation, I just had to give small tips. I really wanted her to be herself. It was a really informal shoot and she was very comfortable in front of the camera.

Finally, what’s next for you?