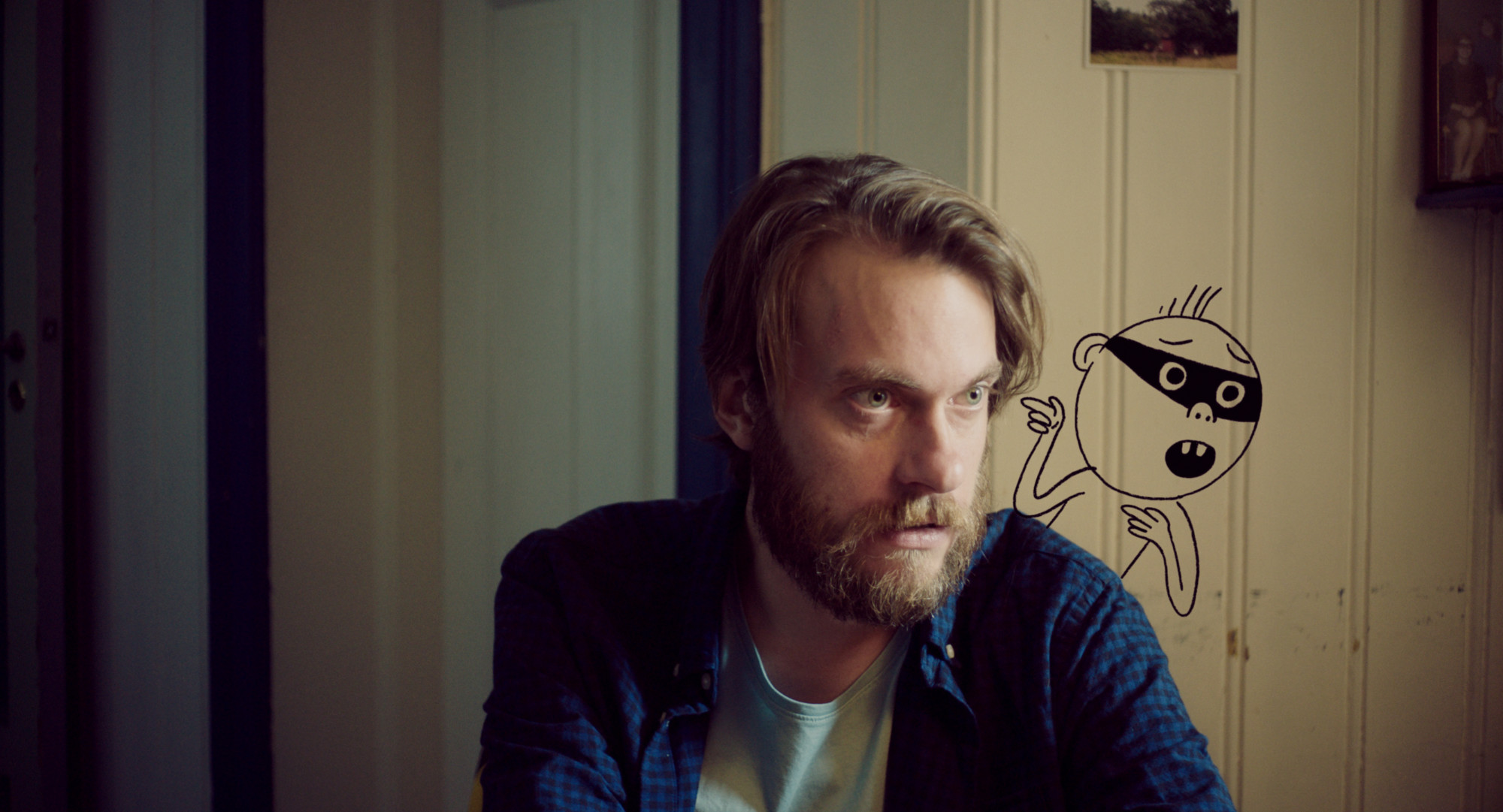 The scramble for a solution to an unexpected and unwanted pregnancy has proven to be richly futile ground for stories of women taking charge of their destinies, both in drama and comedy features. Impressively straddling both those genres comes Yngvild Sve Flikke’s SXSW Global audience award winner Ninjababy – a Norwegian dramedy which personifies the anxieties of its abrasive unexpectedly expecting protagonist Rakel through the animated interjections of the titular mask-wearing baby bandit. Inspired by Inga H. Sætre’s award-winning graphic novel Fallteknikk (who provided the film’s animation), Ninjababy flips gender norms on their head while providing its rambunctious heroine with full agency to explore her options on her own terms. It’s also funny as hell. One of our 10 Best Feature Films at SXSW picks, DN had the pleasure of virtually sitting down with Flikke for a discussion about finding the right balance between humour and seriousness, mixing animation into a live-action movie and her strong desire that the film should in no way be a moralistic tale.

Ninjababy is inspired by Inga H. Sætre’s Fallteknikk. What about the graphic novel appealed to you and how did you go about adapting it from page to screen?

I had the initial musings for the film which brought to mind the graphic novel Fallteknikk (Fall Technique) by Inga H. Sætre in which one of the young characters was dealing with an unwanted pregnancy. It has a very nuanced humour to it which I wanted to explore. I also drew upon another of her series Møkkajentene (Dirty Girls) which I have always loved. I recognized myself in her comical and melancholy point of view, she’s very funny and she has this wonderful kind of humor in her style so I knew I wanted to collaborate with her.

I have been pregnant twice myself and I felt that there’s a lot to say about the ambivalence of being pregnant. Even if they’re wanted you’re not always sure that you will handle it or you can manage or that your life will be okay. After you become a mom, you are bombarded by all kinds of thoughts, you don’t feel you’re good enough. I know how many young adults must have this kind of feeling about pregnancy. Having worked in children’s broadcasting and also having wanted to explore animation within film I felt this was the perfect focus for my next project.

I felt that there’s a lot to say about the ambivalence of being pregnant.

I was also very keen to explore mixing animation into a live action movie in a more narrative way that wasn’t just embroidery put on top. I remember seeing Who Framed Roger Rabbit when I was about 14 and being amazed by that movie which has stuck with me. I also love the way Michel Gondry uses animation in quite a rough fashion.

Inga and I had been working on the idea for a couple of years alongside other projects and then we got this funding from the Norwegian Film Institute New Ways where you get the money on the idea and the concept before your script is even written. Working on the TV series Home Ground, I got to know the scriptwriter Johan Fasting who has this impatient, fun tone when he writes. We gave him everything that we had and he came up with so many fun and wonderful additions which pulled it all together and meant we were ready to shoot. Johan came up with Ninjababy the character. There was a kind of a dynamic where people come together and the humor matches. 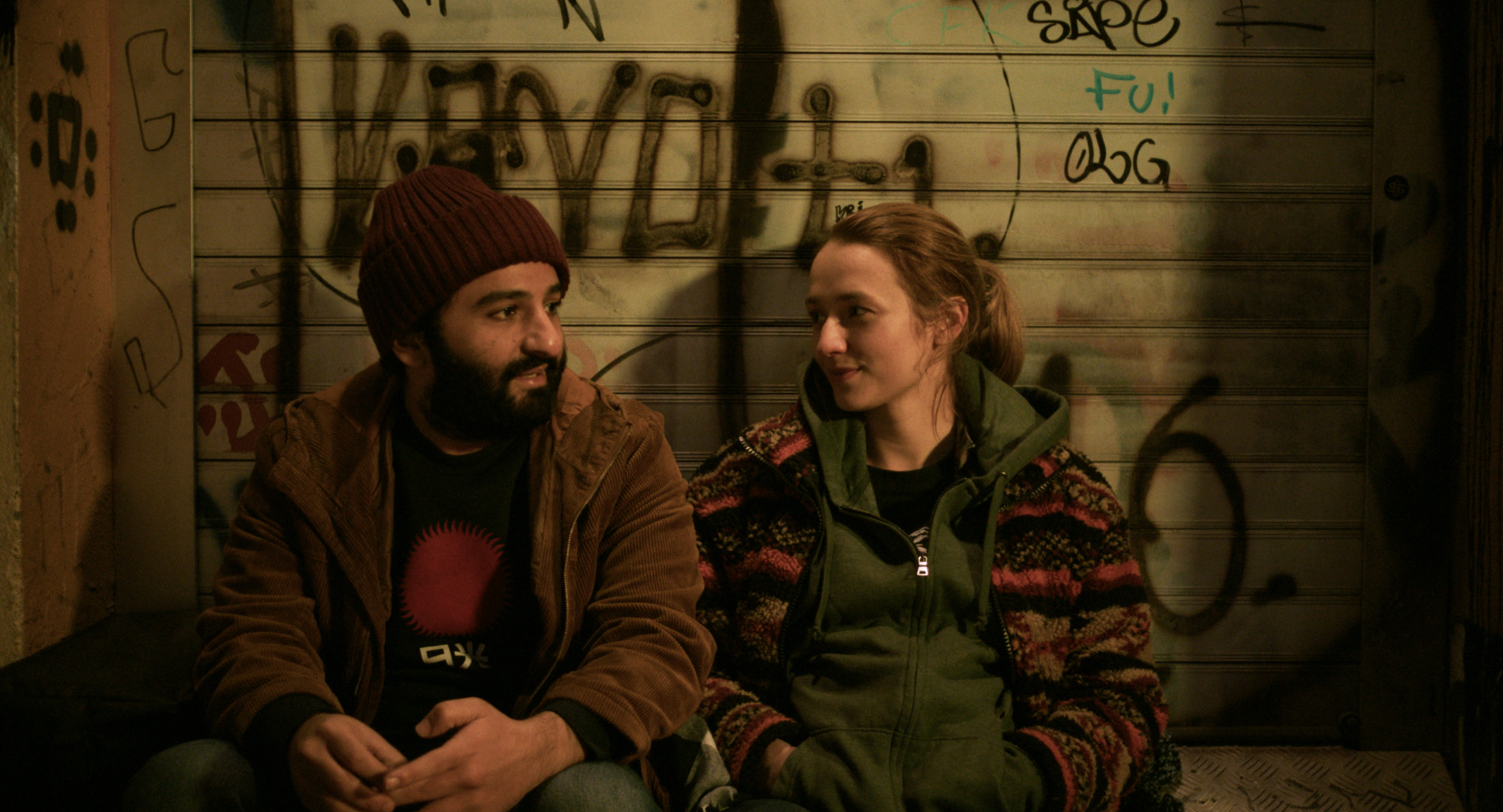 Given the mix of emotion and humour throughout Ninjababy especially for Rakel’s character, how tricky was the casting process for that and the other roles?

We work with an amazing casting agent and I saw hundreds of tapes for the main role as this character needed to be able to both carry the emotion and also the humour which isn’t the easiest to convey when you are so young. Kristine Kujath Thorp who plays Rakel the main character is so talented, you don’t need to be 23 to connect with her because she’s really genuine and true. She just came out and I knew I had to meet her, she’s so lively and fun. We were working with her and trying to find the right actor for Dick Jesus. When Kristine and Arthur Berning connected in the rehearsal room I knew this was the perfect starting block.

We ended up wanting to do serious scenes in a lighthearted fashion and vice versa.

I wanted to highlight the many different ways there are to be a woman or to be a man as we see with the representation of Dick Jesus who turns out to be someone entirely different. With Nader Khademi who plays Mos, I have worked with him previously but in this role, we had to work very closely together because he really had to play someone who he wasn’t used to. He often comes across as the comical sidekick but I wanted this good man who sees her and accepts who she is.

Likewise, how were you able to maintain the film’s sense of lightness despite the seriousness of the core subject matter?

My main aim was to figure out how to make animation and live action work seamlessly together which would lead the tone of the film. I wanted to find the balance between humour and seriousness because I was wondering how much you can joke about it, and trying to find the balance? We ended up wanting to do serious scenes in a lighthearted fashion and vice versa. We were confronted by certain things that you know instinctively you can’t joke about. You know that you will come to a point where she is confronted with her emotions. Towards the end, where she just wants to pull away from everybody and we see the animation scratching out their faces, was our way of getting into the seriousness in a kind of more abstract way. 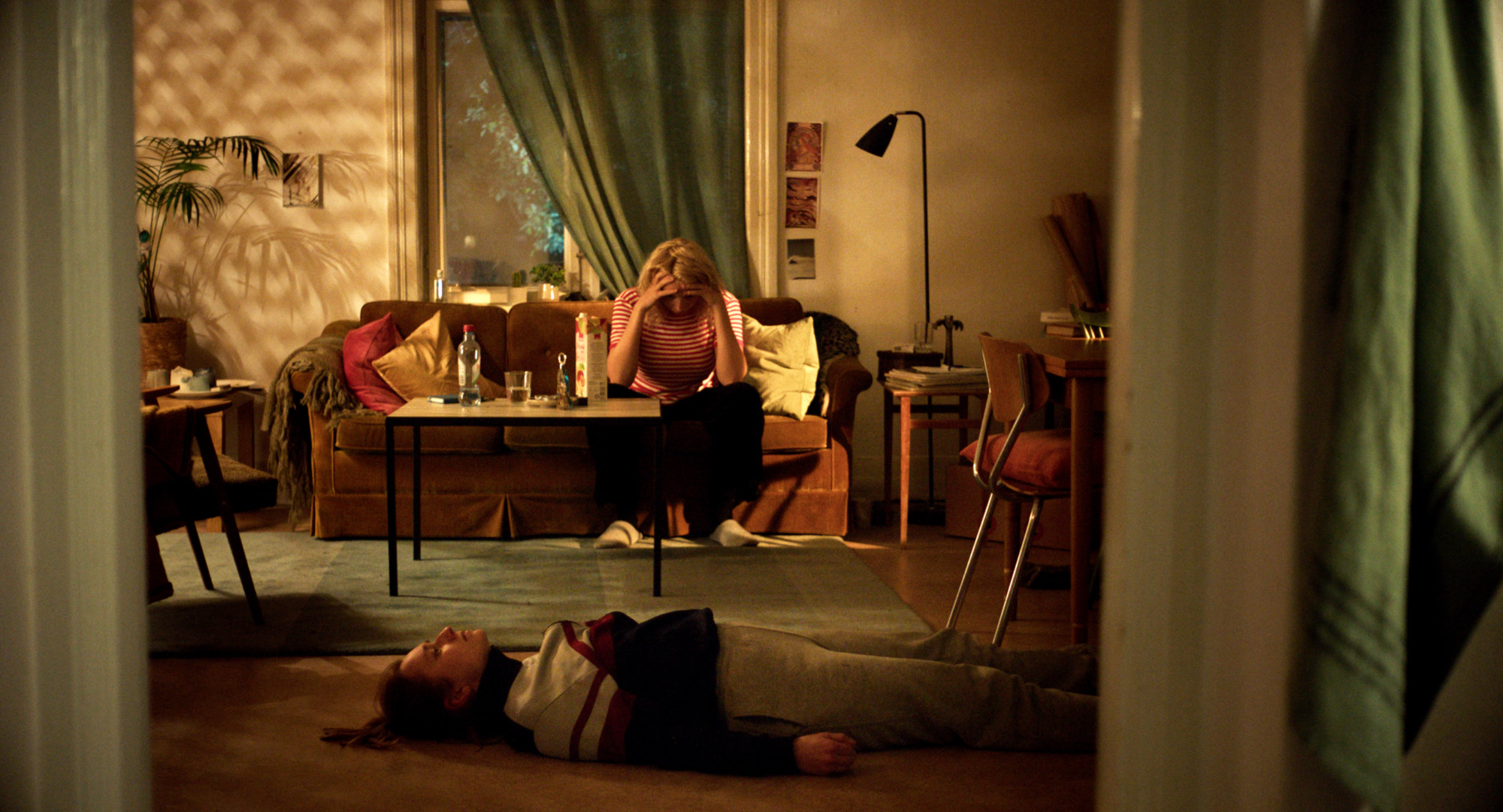 It was often really strange with all the people on set because I was very focused on ensuring everyone who was making this film really understood what we were trying to do. But once we got this little baby on set everyone melted and we had to really work on Kristine being the character. We worked a lot on Rakel’s emotions. Initially, we wanted her to be harsher and quite an angry character but through the filming, I decided that I couldn’t end the shooting without having been able to put in one gut wrenching scene. So five minutes after the last shooting day I had made a deal with Kristine and the photographer to just run and do the final scene. As a result, I don’t know if she’s crying as an actor or as a character. I felt when we edited it was so important to see that one small scene of her breaking down.

We were confronted by certain things that you know instinctively you can’t joke about.

The soundtrack does a great job of pulling us into Rakel’s frenetic life, how did that come together?

I’m married to a composer and music producer so he knows the Norwegian music scene very well and he made the score. I knew that I wanted to feature Norwegian bands starting with Pom Poko. Following the vibe of the film, and with the limited funding meaning we couldn’t go abroad, I decided I needed strong female lead vocals and wanted them to be homegrown Norwegian talent. All of this lends itself to the pace of the film and what we are watching.

You mentioned Ninjababy being aimed at young adults. It’s such an innovative and honest portrayal of pregnancy and youth do you think it will have a wider appeal?

I always have this discussion with my producer because he and I have a long working relationship together and he is always pushing me to have a target group and I would say that I speak to everybody. With Ninjababy I thought: Okay, I’m gonna talk to young adults and I know how to do this because of my background in music journalism and I’ve been working with young adults both in fiction and documentary so I know that scene and that tone. 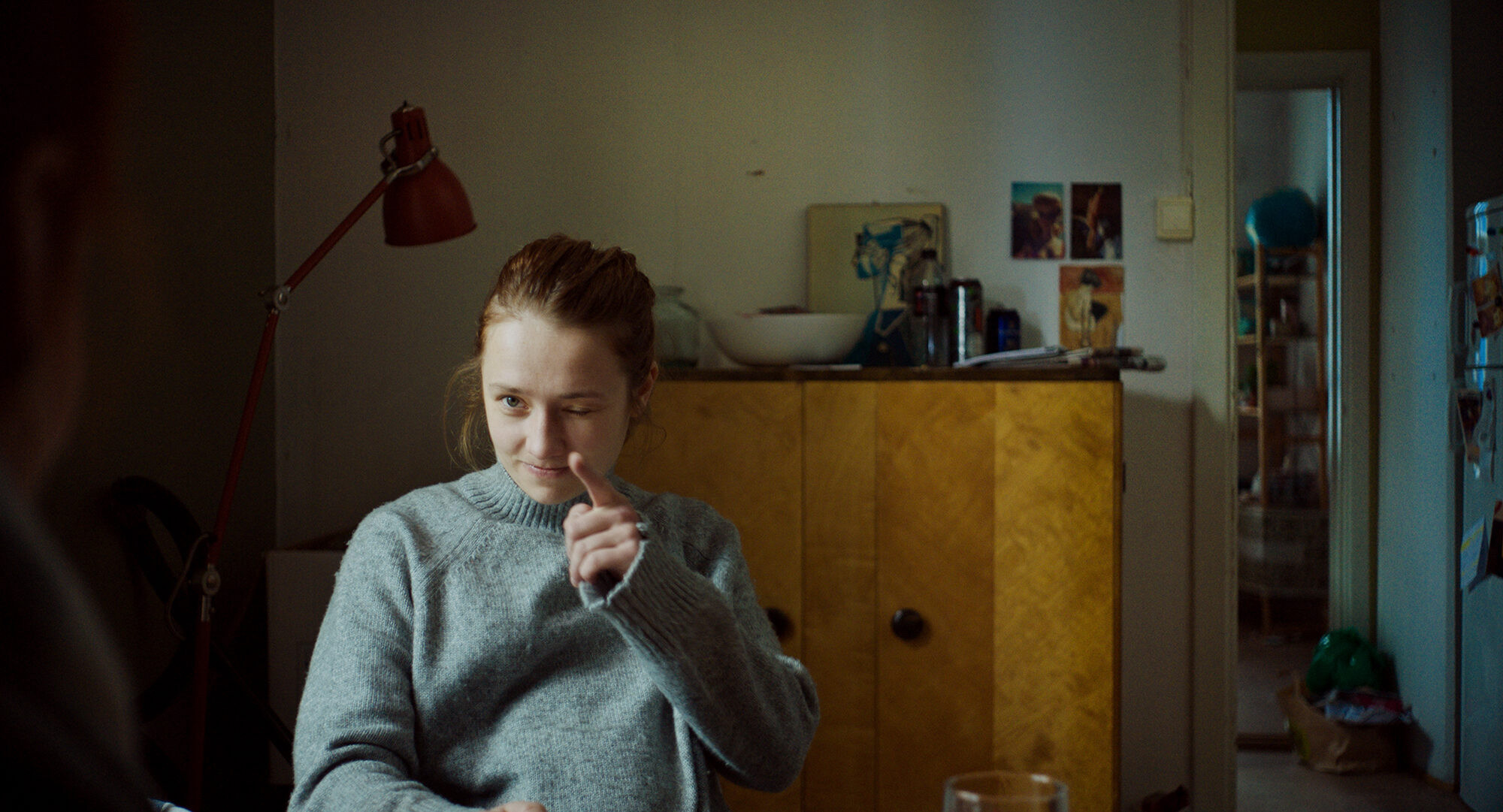 However, after a few screenings during the final edit I realized that older people really connect to the movie. I’ve gotten messages from people who are seventy and above and just love it. Talking to my mum who explained, “We’ve been young and we understand the feelings”. So whilst I might have initially made it for younger people, the majority of my team are women in their 40s and 50s like myself, and we are a group of mothers and creatives who are young at heart which might have affected the tone. We like to play around and might not be as moralistic but it shouldn’t be a moral film. I want to communicate that we all make mistakes, but we need to get up and carry on.

What are you working on now

I’m doing some conceptualising work for this TV series. It’s a historical piece with a lot of fun humor and satire about politics in the 70s in Norway. It follows a female politician and how she manoeuvred through all the old men and became prime minister. We’re telling it for a young audience so we’re getting some tempo and action and fun into it.

You can catch up with all of DN’s coverage from SXSW here and learn more about the festival via the website.