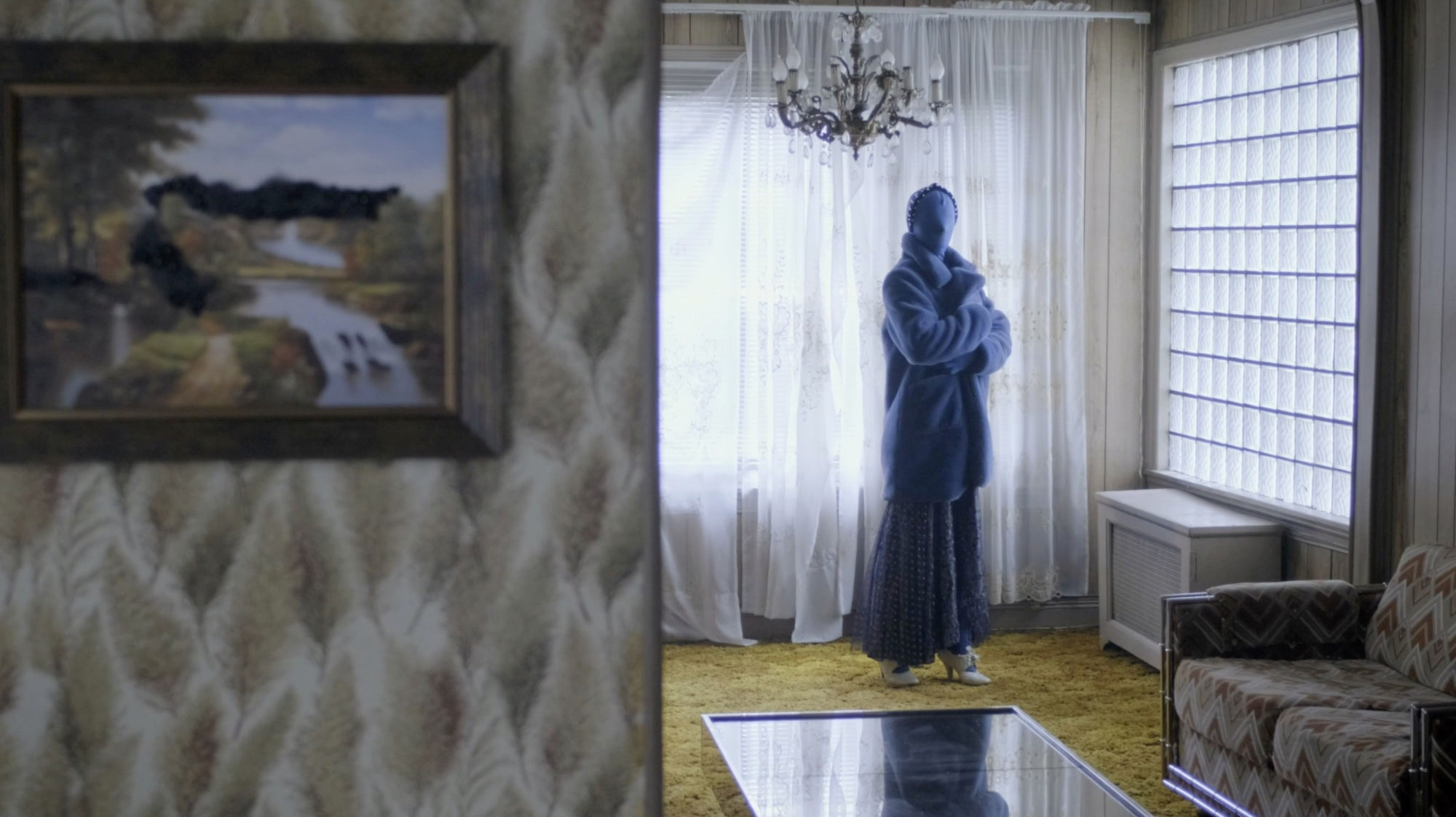 Described as a “surreal fever-dream of a short film”, Francesca Pazniokas’ 6FT. captures the effects of isolation upon the self. Through the use of a traditional home interior and colourful yet minimal costumes, Pazniokas channels the shared mental experience of what it means to be going through a global quarantine. Even in its most surreal moments, her short highlights the collectiveness of the present moment and how we’re not alone in our issues. DN spoke with the Brooklyn-based playwright and filmmaker about her transition from theatre to film, the brief window of execution she had to make 6FT., and the benefits of working with a bare bones crew.

I read that you have a background in theatre, what brought you to take the jump into filmmaking?

I come from a theatre and performance art background, but in 2019 I started making short films. I was planning on learning and creating and shooting a lot of new work in 2020, but of course, 2020 had more exciting plans.

6FT. is a film in conversation with how the pandemic is affecting the individual. At what point over the last year did you decide that this would be your next project and what specifically inspired the concept?

During month six of the pandemic, I started sketching out some ideas about how to safely create a piece about quarantine and social distancing, during the pandemic, without actually talking about COVID directly. There were a few everyday tasks and items that had warped into surreal, grotesque, monstrous things to me during the last six months: masks, my phone, the news cycle, eating, washing my hands, touching loved ones, and stepping outside. Once I settled on that list, I made a few moodboards.

How much of a challenge was it forming this production in Brooklyn during that time? Who did you work with in creating it?

I reached out to my friend Rae. Rae Boyadjis is a Brooklyn-based performance artist that I’ve made art with since we were kids; we also work as an artistic duo under the name Alienchild. We bounced a few ideas around, talking about masking, social isolation, and connection. It was late September, and Brooklyn was just starting to open up; we were afraid that everything might suddenly go into lockdown again, especially with the impending election. So once I found a space I liked, I reached out to Joyce Lai, our production designer, and discussed the concept with her. Unfortunately for Joyce, it’s my belief that she has the ability to make anything on any budget, so I felt empowered to have the audacity to ask her if she could be ready with everything in two to three weeks. I didn’t have a script to show her, just a series of visual ideas. But Joyce jumped in and had even more than I expected ready to go within a few weeks.

There were a few everyday tasks and items that had warped into surreal, grotesque, monstrous things to me.

Because of COVID we wanted to have the fewest amount of people possible on set. Everyone was really flexible and creative, which I appreciated; for example, our DoP Maddalena De Beni shot on her own Fujifilm X-T2 with vintage SLR Rokinon lenses (24mm and 50mm) and did all the lighting herself. The entire cast and crew was just me, our Performer and Costume Designer Rae, our DoP Maddalena, our Production Designer Joyce, and our PA and Graphic Designer Bailey Meadows.

Did you run into any trouble when trying to realise the concept during the shoot?

We were supposed to have a ten hour shoot, but then we had a terrifying technical glitch which caused us to lose the first two hours of footage. That was one of those moments where everyone’s stomach just falls through the floor. I’m naturally an anxious person, but luckily I tend to get less anxious if there’s a crisis. It works out well considering filmmaking, in my limited experience, often feels like one long crisis. Everyone stayed focused and upbeat, and we were able to reshoot what we’d lost, get the rest of our shots, and leave the space on time. All told, it was a ten hour shoot that became a seven to eight hour shoot; we had about a month of pre-production and then four months of post production.

When making non-narrative, non-linear art like this, it’s really a joy and an asset to work with people who have multidisciplinary art backgrounds and diverse interests.

It also helped that Rae and I work together in a structured improvisational style, which helps us shoot things fairly quickly. Plus, we’ve been friends for 20 years, so we read and understand each other easily even during a time crunch.

The shoot as a whole felt very collaborative, and I think it’s because everyone on set has a background outside of film, be it theatre, circus, dance, comedy, comics, visual art, graphic design, etc. When making non-narrative, non-linear art like this, it’s really a joy and an asset to work with people who have multidisciplinary art backgrounds and diverse interests.

How easy a route was it piecing the footage together along with the sound design and music in post?

Once I had the footage, I reached out to Chuck Blue Lowry, an artist and filmmaker based in the UK. I wanted someone else to look through the footage and tell me what they saw, like divination by tea leaves. I needed help moulding it into a cohesive piece. Chuck turned the series of images I had in my head into a short film, simply put. I was so lucky to have her dramaturgical and editing guidance on this piece. Matt Keim’s sound design and music tied everything together, and he’s just a wonder to work with, too. All I had to do was say something like: “Could you take a news clip in English and turn it into gibberish that still sounds like English?” and he’d have it to me a few hours later like it wasn’t a bizarre impossible request at all.

Will you be returning to short film anytime soon?

Right now I’m mainly focusing on playwriting and screenwriting. I first started making short films about two years ago, as a break from writing. I loved getting to focus on visual language over dialogue. So far I’ve kept my writing and my film directing separate from each other but I think it’s time to start combining them. So I’m working on screenwriting, and I’m also hoping to shoot one more short this year, this time a narrative piece. I’m excited to explore a new way of filmmaking. And nervous, too! Luckily I’ve had a lot of practice being anxious and confused, and it’s never stopped me before. So we’ll see what happens.

6FT. is one of the many great projects shared with the Directors Notes Programmers through our submissions process. If you’d like to join them submit your film.