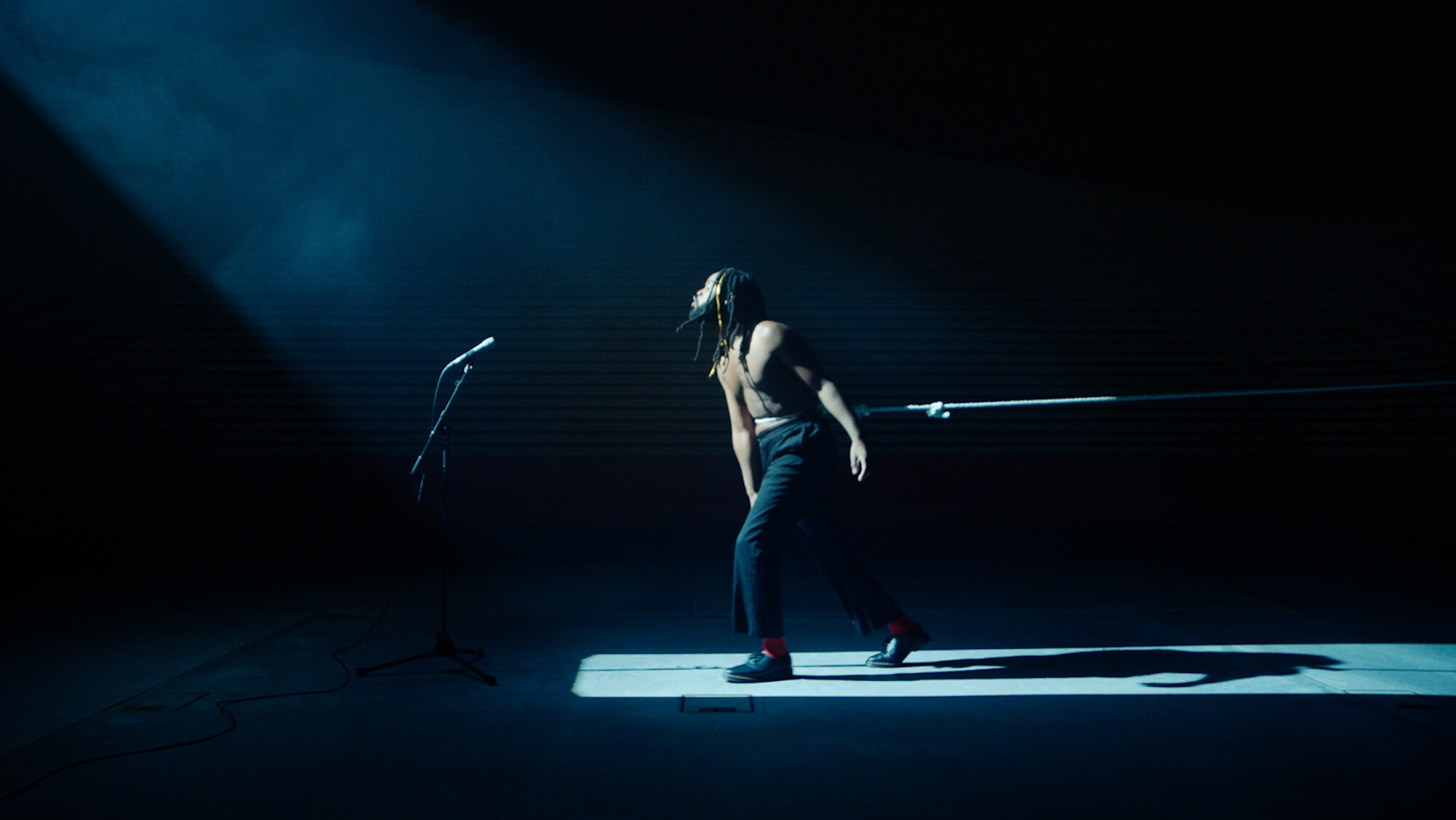 Genesis Owusu is both personally and psychologically bound in VERSUS’ (aka Tanya Babic and Jason Sukadana) stirring performance film The Fall, which takes the artist’s track and amplifies it into a potent take on social entrapment. The film itself was captured at Phoenix Central Park, a vast performance space which acts like an almost void-like backdrop to Genesis Owusu’s continuous fight. His performance is a searing refutation of the oppressive unbalanced status quo that governs race, representation and the relationship artists have with the world, yet despite the many physical and mental constraints he endures, he never appears beaten or defeated. We spoke to the Sydney-based directing duo to discover how the project came to light, what it was like to capture Genesis Owusu’s charisma in a live environment and the visual construction behind the film’s commanding imagery.

How did you come to work on this Phoenix Central Park project with Genesis Owusu?

So this film was commissioned by Phoenix Central Park, which is this incredible performance space in Sydney dedicated to innovative collaborations. It’s actually the last in a series of films which we directed for them, each with a completely different performer/artist, all investigating how the collision of film, performance and architecture affect the psyche. We hadn’t met up with Kofi (Genesis Owusu) yet, and he was waiting to see the space before deciding what he wanted to perform, but we were big fans of his work and were familiar with his aesthetic and the breadth of themes he deals with in his music.

Conceptually, what intrigued you and Kofi about telling a story of entrapment and the restraints society places on us?

We knew we wanted to explore this idea of ‘disturbance’, and we had this nugget of an idea involving an artist performing whilst bound up in these increasingly intense or absurd situations. Phoenix is this architectural marvel of a space, and we were almost thinking of it like a villains lair.

We wanted to ensure that despite the psychical and metaphysical restraints imposed upon him within each scene, he wasn’t ever seen to be disempowered.

We met up with Kofi for the first time on his first walk through the space and chatted about some ideas afterwards. When we put forward this concept and he was instantly like, “The Fall“. He’d literally just finished recording this track the day before, and its claustrophobic feel and key themes of entrapment just worked perfectly with it So it became a real symbiotic process.

How did that symbiotic process evolve when it came to collaborating in person with Kofi throughout the process?

Kofi is just an incredible artist in every sense of the word, and we worked with him to develop the concept to sync with themes explored in the track. We also wanted to ensure that despite the psychical and metaphysical restraints imposed upon him within each scene, he wasn’t ever seen to be disempowered.

It’s also key to note that this is a live performance to an extent – Kofi’s vocals were recorded live in each scene, so at least one of the mics you see is always actually functional. Kofi has such an incredible energy and magnetism that I can’t imagine anyone else being able to bring such charisma to a film whilst basically being tied up for an entire day.

Each shot is so incredibly distinctive in its construction. Who did you work with on the cinematography and what discussions did you have with them in bringing Kofi’s vision to life?

In terms of filming, it was actually the first time we worked with DP Tyson Perkins, who is amazing and someone to keep an eye on. It was a really fluid and natural process and he’s always putting forward ideas as you build scenes. We shot on an Alexa Mini and he was able to secure us a set of Zeiss Ultra Speeds, which apart from looking beautiful have some fairly wide focal lengths which allowed us to take advantage of the incredible spaces we were filming in and help build a sense of unease.

What did your shot preparation with Tyson look like? Did you storyboard at all?

We didn’t storyboard in the traditional sense, but we framed up shots on our recce and had a doc that had these, reference images, and notes for each scene and shot. We spoke/messaged a lot in the lead up and Tyson was always throwing us great ideas. We came into the shoot knowing the space really well, and having a solid plan and frame in mind for each shot. The Steadicam shots were the ones with more flexibility for playing around with and our op Justin Besser got some great stuff.

What involvement did Phoenix Central Park have in the creative process of The Fall?

The commission for this project came directly from Phoenix Executive Producer and Creative Director, Beau Neilson. Her commitment to the performing arts is exactly what the world needs right now. Phoenix’s live music program and performance commissions are really bold and helping to shape the arts scene in Sydney in a really exciting and forward thinking way. Beau and the small but mighty team at Phoenix, Angus Hunt and Josh Milch, are such amazing collaborators. The fact they always find a way to make stuff happen even if it’s incredibly inconvenient and difficult only makes the work they commission better and stronger.

What is it about Phoenix Central Park that attracted you both to shoot there? Was there anything about the space you wanted to bring into the film?

It’s hard to put into words how incredible the space is and it’s a bit of a double-edged sword as it can be hard to do it justice on film. Phoenix has commissioned quite a few films to be shot within the space by various directors, including others by us, and continue to do so. One thing we wanted to do was recontextualize the space by utilising key art direction, and in The Fall, the boldness of the vignettes was always going to set it apart. Plus, Kofi just brings so much to every frame, his energy is out of this world. We were very conscious of utilising spaces that spoke to this idea of claustrophobia and unease, and amplifying them with the angles and art direction.

Images of Kofi restrained within public and private spaces usually reserved for high art are obviously loaded and challenging viewing at times.

The theme of entrapment, particularly when concerning race relations, is unfortunately still so prescient. What decisions did you take when making The Fall to ensure you were representing those issues correctly?

Kofi said it best, which is that race is sewn into the fabric of everything. If you’re commenting on anything ever, whether personal or societal, then race is a factor. Images of Kofi restrained within public and private spaces usually reserved for high art are obviously loaded and challenging viewing at times. But centuries of racism and repression are sewn into the very fabric of visual art as we know it. We worked closely with Kofi to workshop each and every scene- the commentary, sentiment and tone particularly, working on it until it felt right. 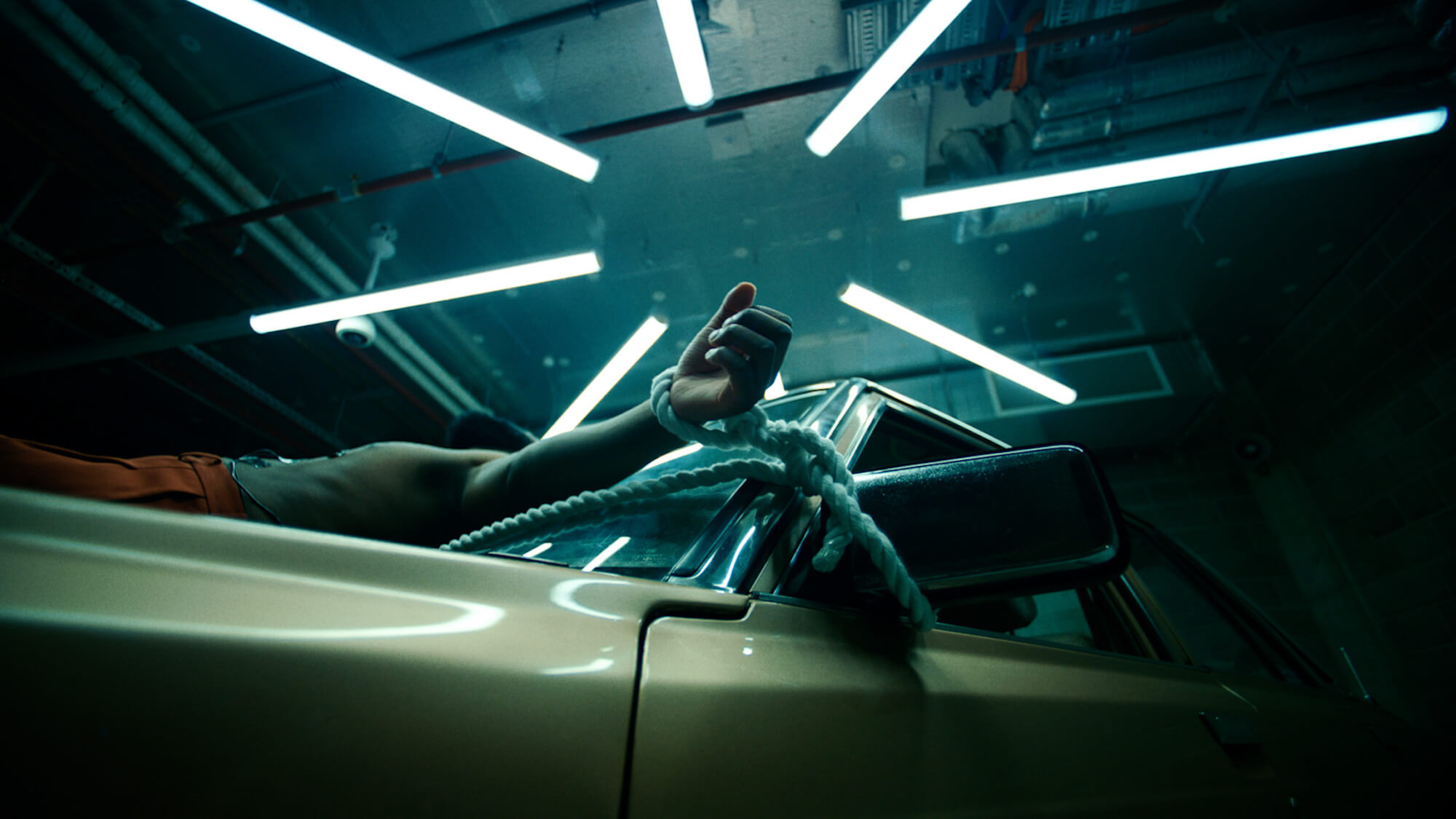 What other projects are you working on now?

We are currently sitting tight as Sydney endures its harshest lockdown since the beginning of the pandemic. All of our projects have been put on hold until we’re able to shoot again. Which is tough but unfortunately nothing anyone is unfamiliar with. But we have a couple of really exciting commissions due for release later this year which we can’t wait to share with the world, and we’re currently in development on a project that’s a big, tasty one.