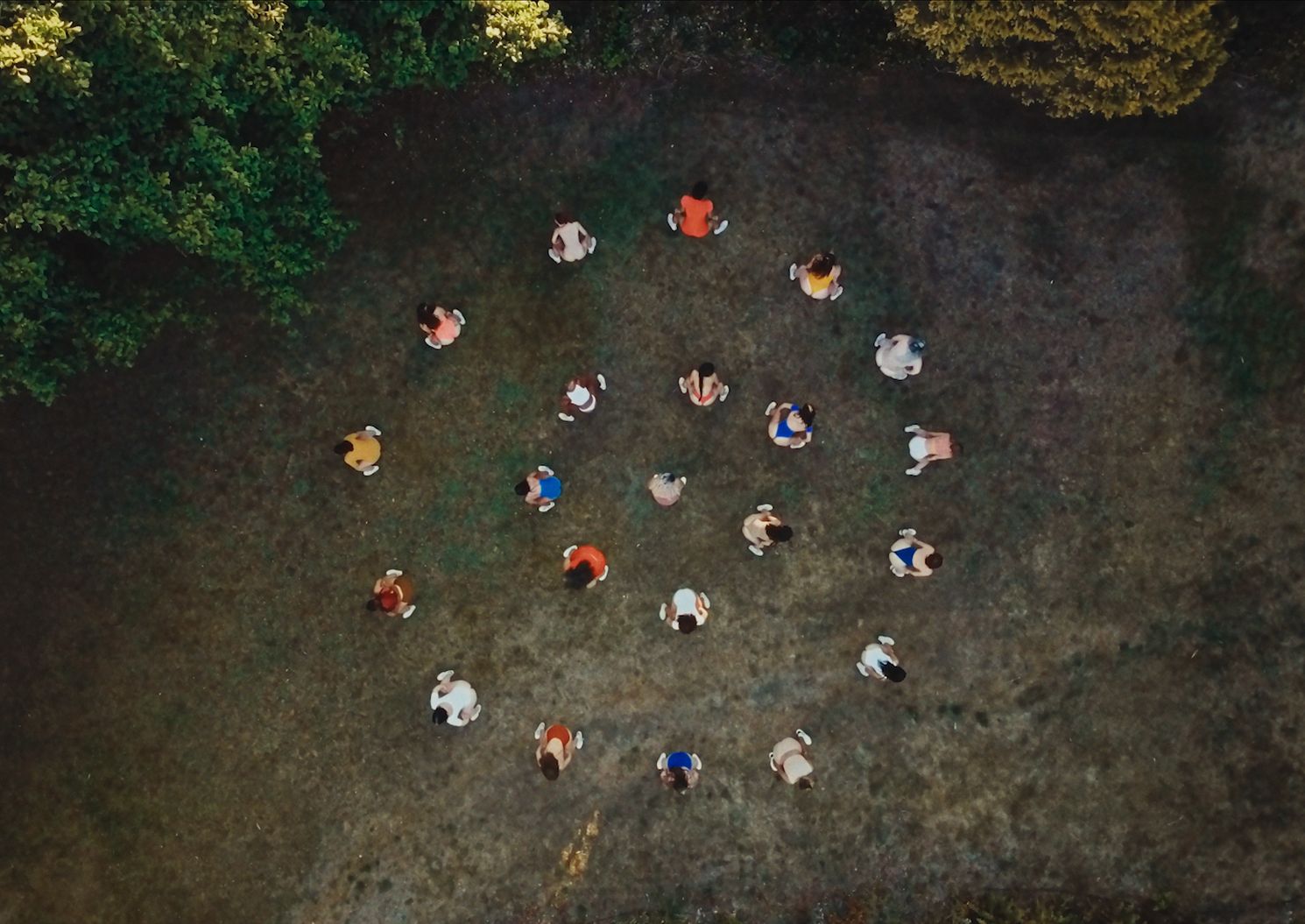 There are films that evoke strong reactions in us, be it a reminder of our childhood, books we have read, or experiences we have lived through. We laugh, we cry, are delighted and sometimes shocked by film in all of its delectable forms and as a consequence of the endless supply of creative minds in this world, there really is something for all shapes and sizes. I am proud to say that Booty Freedom from Sebastian Hill-Esbrand made me yearn for the ability to twerk and move my booty in the formidably proud and fascinating ways exemplified in this empowering and self-celebratory short. Right from the opening statement we are drawn in to what you may initially assume is a tongue-in-cheek piece of work but very quickly reveals itself to be so much more. A director who celebrates diversity, with roots in the Caribbean and growing up as a first generation New Zealand/American in Australia, below Hill-Esbrand talks to DN about his caution as a straight cis-male director in taking up the task of glorifying these woman and their movement as truly deserved and reveals that despite his best efforts he “still can’t twerk too well but I’m getting the twang of it”.

How did you come to be connected to such a fabulous community and the members therein?

I had an idea for another concept on the misconceptions of the pole-dancing industry which I pitched to FORM (Festival of Recorded Movement) for their 2020 commissioned artists fund. After the world flipped, I decided to postpone my film until the following year so I knew I had this funded FORM project with no subject or concept. I was introduced to Nargis, the founder and choreographer, through fellow Booty Freedom member Diego. I told her my intention is to showcase the girls at Booty Freedom in a non-sexualised way and to create a piece that focuses on the dance and not the objectification of a woman dancing.

I had to ask myself the question, “How do you showcase a dance that is so objectified in the modern day and relay it to an audience as something different?”

I knew at that point that working with Booty was an initiative that was going to be more impactful than I ever expected. It’s a reflection of the community and self-growth. Booty Freedom is a life source to a community of people that transforms the way they see themselves and their place in the world. Getting the chance to showcase a community that is so sentimental to its members and allowing them to show the world their true selves has unquantifiable benefits to the community at large – and that to me feels purposeful.

Every member’s story was unique and full of challenges to overcome. Navigating life as a queer person, learning to live with an incurable medical condition and everything in between. The support gained from Booty Freedom would leverage their self-confidence beyond class hours. 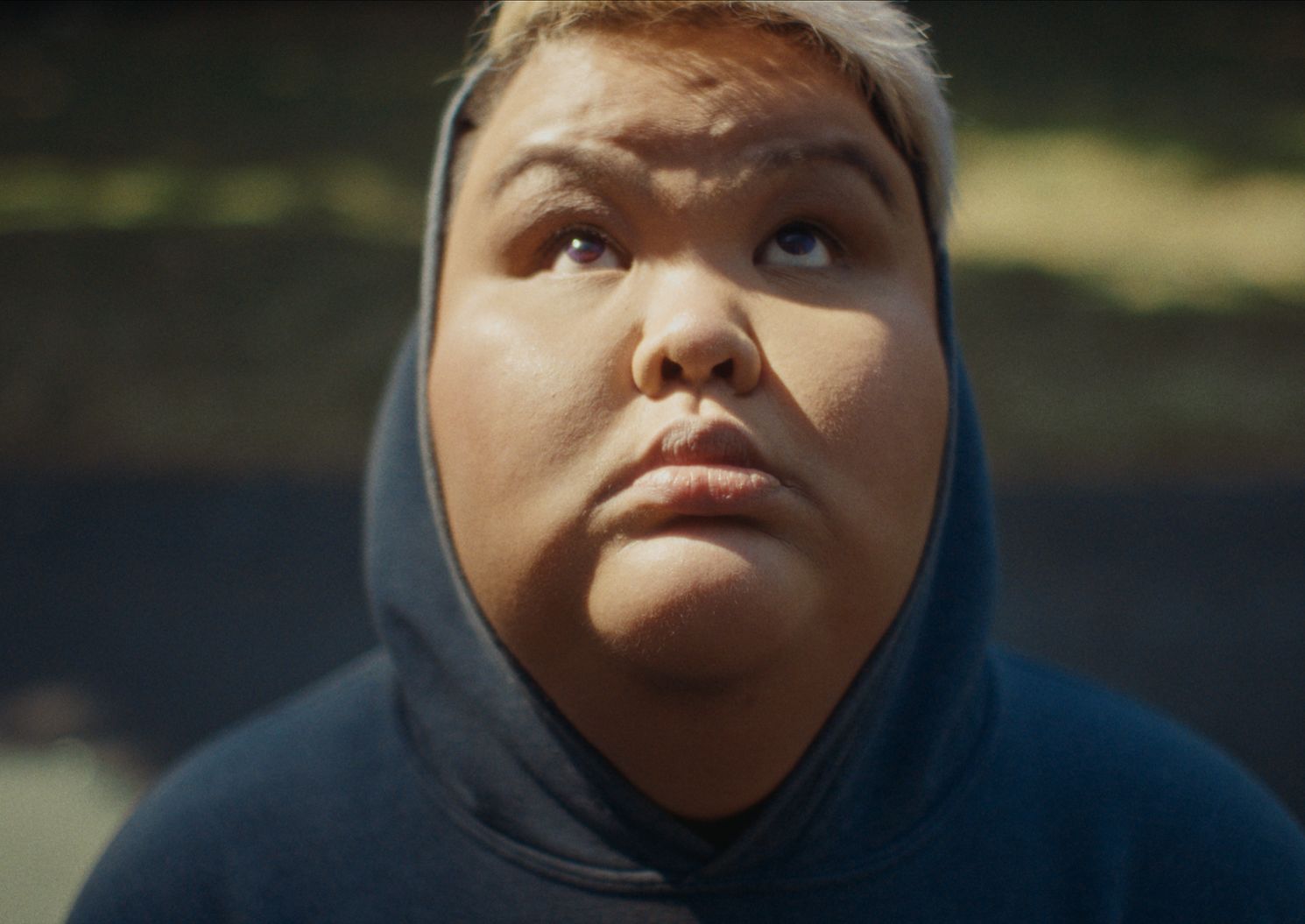 Rozelle’s story was particularly touching, she has been in and out of hospitals fighting a kidney disease her entire life. Our interview was enriched with deep empathy. The turmoil this woman has gone through is insufferable, yet her ability to hold her head up high is compelling. Since joining Booty Freedom she was able to transform her attitude towards herself, her journey, and connect with her authentic self, which really hit my core.

Intent means everything in the mind of a filmmaker. I had to ask myself the question, “How do you showcase a dance that is so objectified in the modern day and relay it to an audience as something different?” I wanted to capture this group in a way that de-centers the male gaze – which can almost seem impossible as a straight cis-male director.

I think it’s important for directors to be vulnerable and step on the other side of the camera so they can actually step into the shoes of their subject. If I’m not willing to be vulnerable in a Booty Freedom class, how can I expect them to be vulnerable with me? I still can’t twerk too well but I’m getting the twang of it. 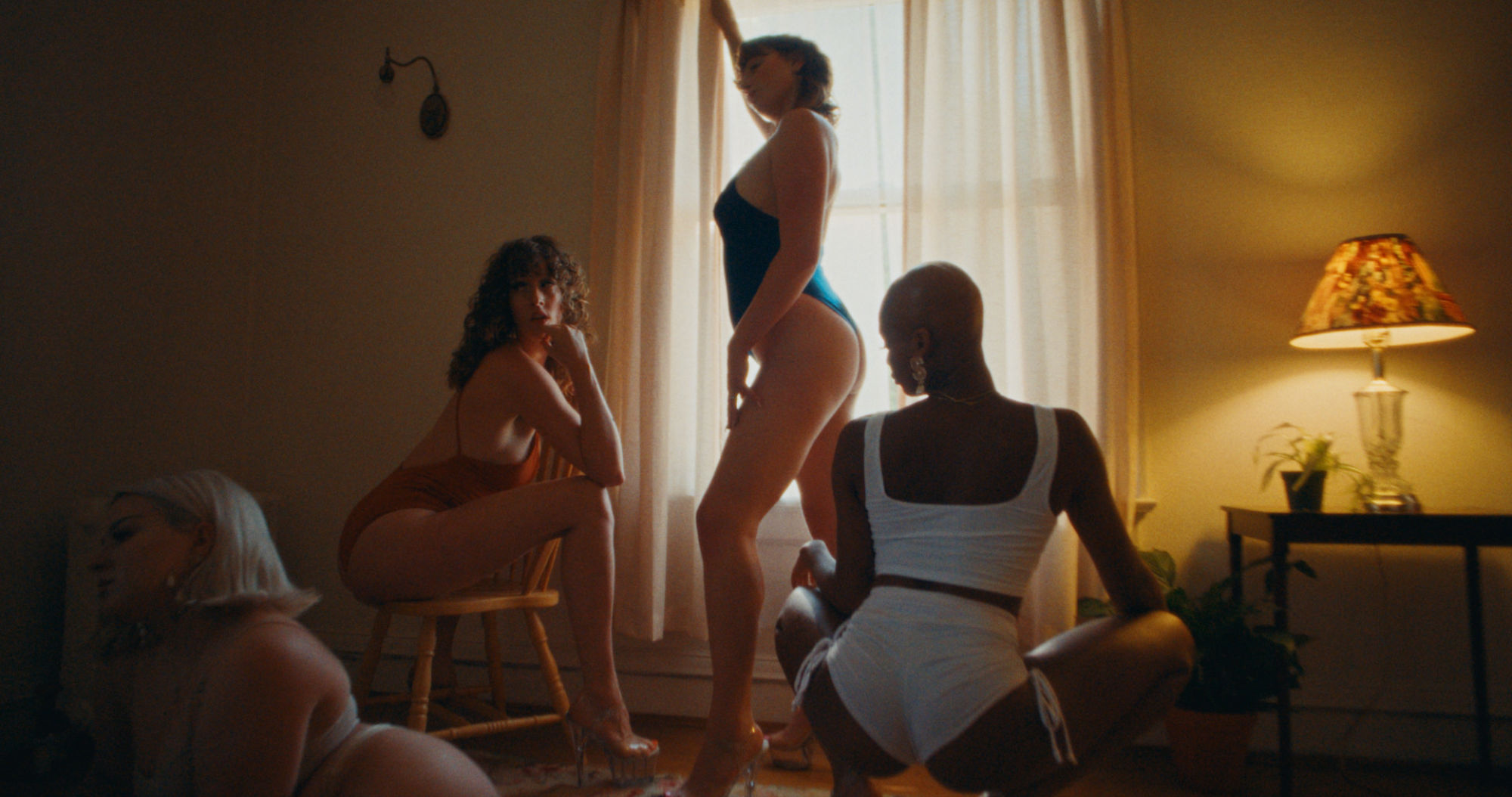 What was the initial reaction from Booty Freedom towards your project?

After connecting with Nargis and agreeing on the project, over the following weeks we met up and discussed how we could tell the story in a digestible and engaging way. In an attempt to gain insight into what I was capturing, I took a documentary approach to learn about the class and its members. I had a pretty loose set of questions and was simply listening to their individual experiences with empathy and curiosity.

Intent means everything in the mind of a filmmaker.

Getting people to open up to you is a unique skill. What sort of questions were you asking the class to learn their stories?

In an attempt to gain insight into what I was capturing, what I found out was truly magical. What originally started as a solely word-of-mouth dance class (“psst..hey, have you heard of booty freedom?”) evolved into a self-liberation and body positive movement. Booty Freedom substitutes as a female’s Fight Club. A place where members can liberate themselves through booty movement and dance, in a space that is encouraging and accepting and is all about showing up and falling in love with the person you see in the mirror.

During the initial conversations, I went in with the intention to listen and learn. If someone said something that alarmed my curiosity or empathy receptors I would dig deeper to understand their perspective. I found approaching the project this way was the best way for me to discover what the spirit of Booty Freedom was without any of my preconceived beliefs or assumptions. Allowing myself to share the power dynamic in the interview process enabled us to establish a more collaborative workflow, and within that collaboration rapport and trust was built.

I think being able to share a similar experience with another’s struggle allows for a sense of understanding that defies genders. Knowing you’re in a space that is open and relatable often licenses a stronger emotional connection. The results were an insightful look into the character development of the community.

How did you build your narrative – could you tell us more about the process from meeting the group to then having a script ready to shoot?

In one of my initial conversations with Nargis she broke down the class structure for me. The class starts in a circle to hear how everyone was feeling – physically, mentally and emotionally. After they warm up, they begin the class choreography which often consists of floor work, chair work and a sneakers session. Then the class moves into a freestyle and group circle. In the film, we recreated the class structure throughout the rooms of the house and added a few scenes to connect the floors of the house. Although our narrative was abstract, we were intentional about the scenes we were doing and how they correlated with the arc of class. The Booty Circle outside is supposed to represent the closing ‘check in’ that starts and finishes the class.

What, if any, specific roadblocks did you run into as a straight cis-male director making such a diverse and inclusive film?

When I told people that I wanted to create a film that showcases twerking but isn’t cliche and they responded with an encouraging nod of disbelief. Apart from that, the most severe roadblocks were often overcome by getting out of my comfort zone…Like going to rehearsals and shaking my ass with the class. I remember having an epiphany and acknowledged that this project was a collaboration between myself and Booty Freedom as a commission from Festival of Recorded Movement. The shift in ownership made me realize that I was creating a project that was the reflection of a community. That is work enriched with more value than of only mine alone – and as an artist, that feels meaningful to me.

It was important for me to have a female-centric team to keep the gaze of the camera intersectional.

One hurdle was music – I was always envisioning the film to a Savage remix from Soundcloud since the genesis of the project, and about 1 week out of production Nargis pitched me a Megan the Stallion track, which at the time was a complete curveball from what I had been envisioning. I could sense this was the first bit of tension between myself and the choreographer, and there was no plausible way for us to rehearse a choreography to both tracks. I had to ask myself who this project was for and what was it representing? Was it the skew of the abstract visual taste in my head or a piece that reflects the transformational power of community? We chose the latter. Now that I see this piece out in the world I honestly couldn’t imagine it any other way. 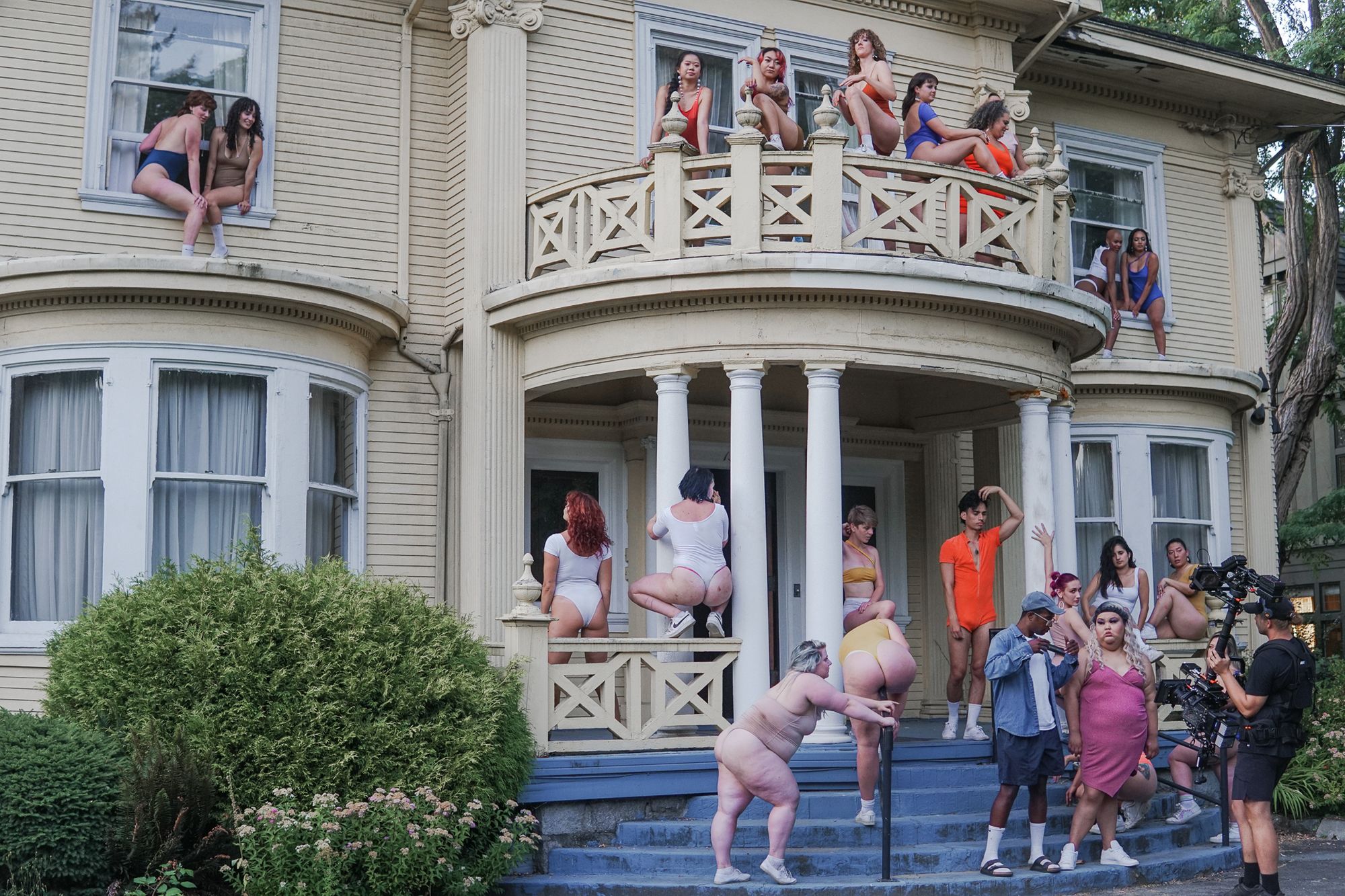 I helmed the production on my own with support from Kiddo Films, it was important for me to have a female-centric team to keep the gaze of the camera intersectional. This was a project by an exceptional set of women for womxn and I wanted that to be reflected behind the screen too. Who the person was operating the camera was an important factor too.

I worked with Avery Holliday as DoP and we had creative discussions about how to practically decentralize the male gaze. After the shoot, it all came together in post once I met Coline Debray, who is a kick-ass editor and coincidentally has also been an attendee of Booty Freedom since its inception. Our whole encounter felt extremely organic and I knew she was the best person to edit the project. We prepped for one month, shot in one day on a Sony Venice, had a female dominant crew and cast and turned it around in post in a month.

Another primary contributor was just being aware of my own male gaze and learning to neutralize that to the point that you’re no longer seeing them as a good looking stranger but instead as the beautifully human they are. It’s still a question I’m not sure we have answers to (as a cis-male) but Avery’s sensibilities anchored our camera in a lens that allied our subjects.

What are you working on next – will we be treated to something about pole dancing?

I’ve got a bunch of other short projects which are releasing very soon! Overall, I’m just gravitating to making work that is meaningful. Pole dancing could have an interesting perspective!

Directors Notes is honoured to present the premiere of Booty Freedom on our pages today. If you would like to join the filmmakers sporting a fetching DN Premiere Laurel, submit your film now.