A major part of adulthood is learning who your real friends are. The ones who make an effort to stay in touch when you drift apart either naturally or geographically. These relationships are often tested during unsuspecting reunions. Jonas Grimeland taps into the uncomfortable awkwardness of such unanticipated meetings with Service (Tjenestemann), the story of two friends who are brought together when one, as a police officer, is sent to check out a house party being hosted by another. Then when drugs are discovered, the facade of friendship falls. Grimeland cleverly uses the genre of the crime drama as a Trojan horse for a breakup story between friends. He utilises quiet, subtle performances to showcase the crumbling relationship between his two characters who will never be the same after this evening. DN is delighted to premiere Service on our pages today and asked Grimeland to join us for a conversation about the direct research he conducted with a police officer and close friend, whose own life lessons inspired the film.

I read that the film came about after you had a discussion with local police officers in Norway. What interested you about the stories they told you?

I wanted the film to be about loyalty in rural Norway and working with the police felt like a natural place to go. You naturally carry several roles when you know people from growing up as well as a new role as a law enforcer. Old friends might have expectations of you that don’t align with this new position. I worked closely together with a good friend who works as a police officer in the county where we both grew up. The conflict grew from conversations with him and the worries he has in his everyday life. It is important to remember that the officers are surprisingly young. In the last scene, I wanted to show that there is a certain level of naivety about the decision of being a police officer. He can not actually be the same person as he was, that is gone. A big realisation for me was that this is a film about the time the character became a police officer, that is his arc.

Even if it is a short format I still needed to move through the same stages as on a longer format.

And how long did it take you to bring the whole film together from those initial conversations through to the final edit?

It took probably about a year and a half from when the screenplay was written until the film was finished. Even if it is a short format I still needed to move through the same stages as on a longer format. The actual shoot was done in three days in Telemark, Norway, and pre-production with the local crew was efficient. We had some national funding on this so it was luckily possible to resolve the shoot much like other commercial productions. This is obviously a big advantage for the production, but I found it surprisingly makes little difference to the actual film. With or without money you are still shooting your script, and it starts and ends there in a way.

Could you talk about establishing the core relationships in the film? As soon as the policemen enter the party you immediately get the sense that they’re on equal footing with everyone inside. There is a real shift in the power dynamic.

It was important to me not to show the party in the film as anything crazy poor or rough, it had to feel like most of us could be there. I find that rural areas are often depicted as something crazy in films and that just isn’t my experience growing up. Service is meant to be a personal story, so it had to be the focus. I think that if the police officer didn’t have a personal relationship with Kris, he probably would have been taken in. It is more a breakup story between friends, than a crime story.

It looks fantastic too with a real emphasis on the lighting in each of these environments. What did you shoot on?

We shot on an Alexa Mini, k35, 25-120 zoom for the opening shot and Leica Summicron or Summilux. I also wanted to keep us on sticks for the majority of the shoot. This was a decision to keep the shots simple and focus on purposeful blocking. 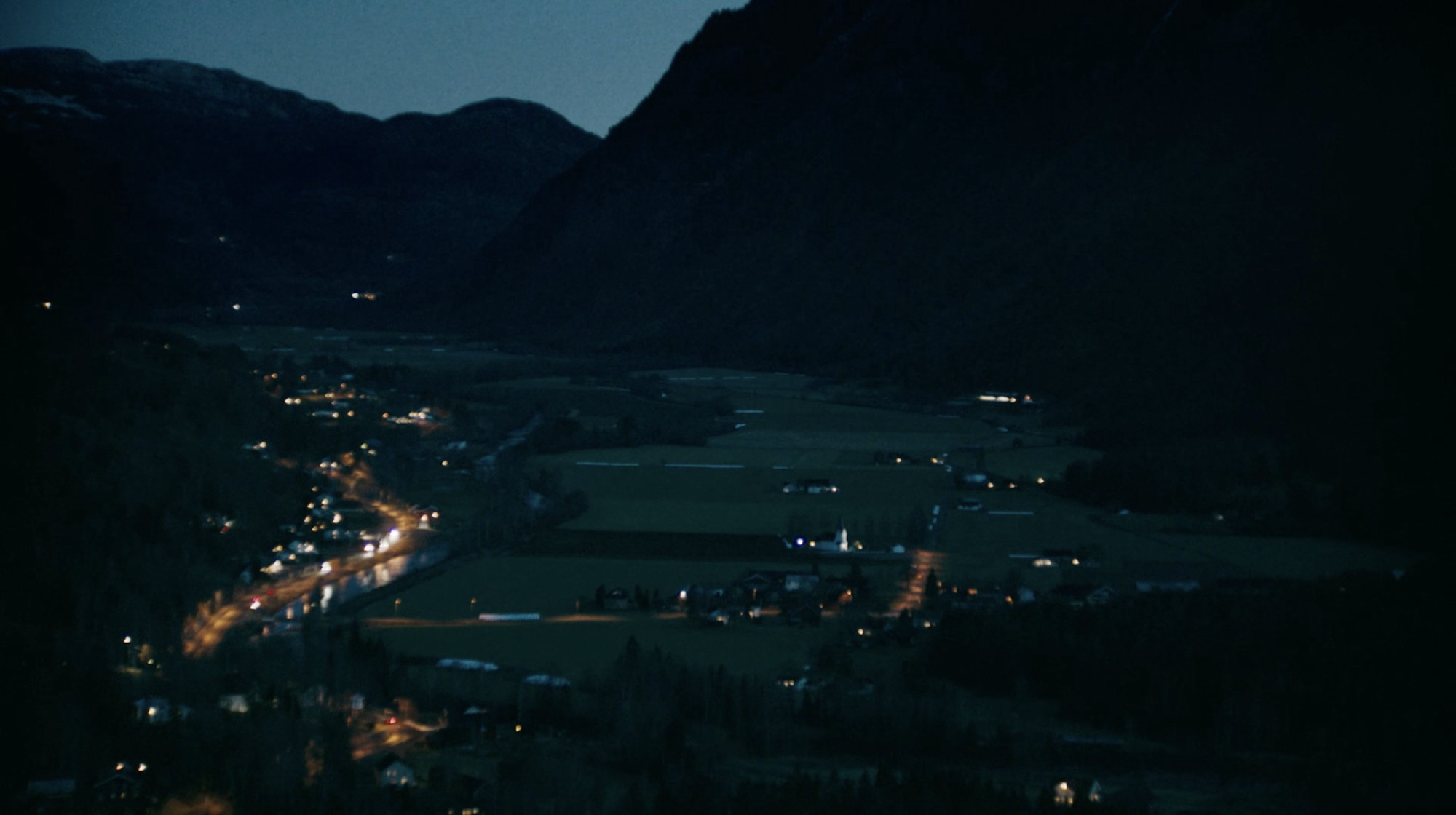 The opening zoom shot is incredible! What inspired it and how did you find executing it?

I drove through this valley every day for three years getting to my college and I always found it so incredible how the mountain just stops in this completely flat landscape When I was writing this film I thought it was really symbolic to place it somewhere where your exits are so limited and everything is so incredibly confined and claustrophobic. I also thought it was good to put the voice of the police in there to show the change of roles from being two young guys singing to some rap music to entering the role of police just when they get to the destination.

It is more a breakup story between friends, than a crime story.

A lot of the tension between the friends is unspoken, how did you work with your actors to help them convey that?

The film is actually quite close to how it was written but I think the most important part is the rhythm of the breaks between them. Some of that came down to not giving them a timeframe they had to work within. Giving direction like “take your time getting where you need to”, and some of that is just working in the edit.

As I mentioned the lighting in the film is gorgeous and has such distinctive colouring, how did you approach that part of the film’s visuals?

I wanted the different areas to have slightly different color identities. As we are moving in such a small area I found it important to separate it somehow and feel the progression. I have worked with Torfinn Sanderud, the DoP, over many years and we always try to find something to give each film its own identity. For this one, it was that I wanted it to feel ‘police’. They have some very distinct colours, fonts, etc. It is rare that what is the most cool or trendy is what is also right for the film!

Can you tell us anything about what you’ll be working on next?

I am trying to develop this into a longer format. I think there is a lot to build on and I find it really fascinating that young police officers are encouraged to work in the place they grew up or know well. It is a source of a lot of human conflict surrounding loyalty.

Also, I am finishing up another short touching on some of the same themes surrounding male friendship. It’s a more comedic film following two friends on a kayak trip, where one tells the other he has started to date his friend’s ex and somewhat taken over the father role of his kid while the other one has been gone to shoot reality TV. It is a fun little thing.