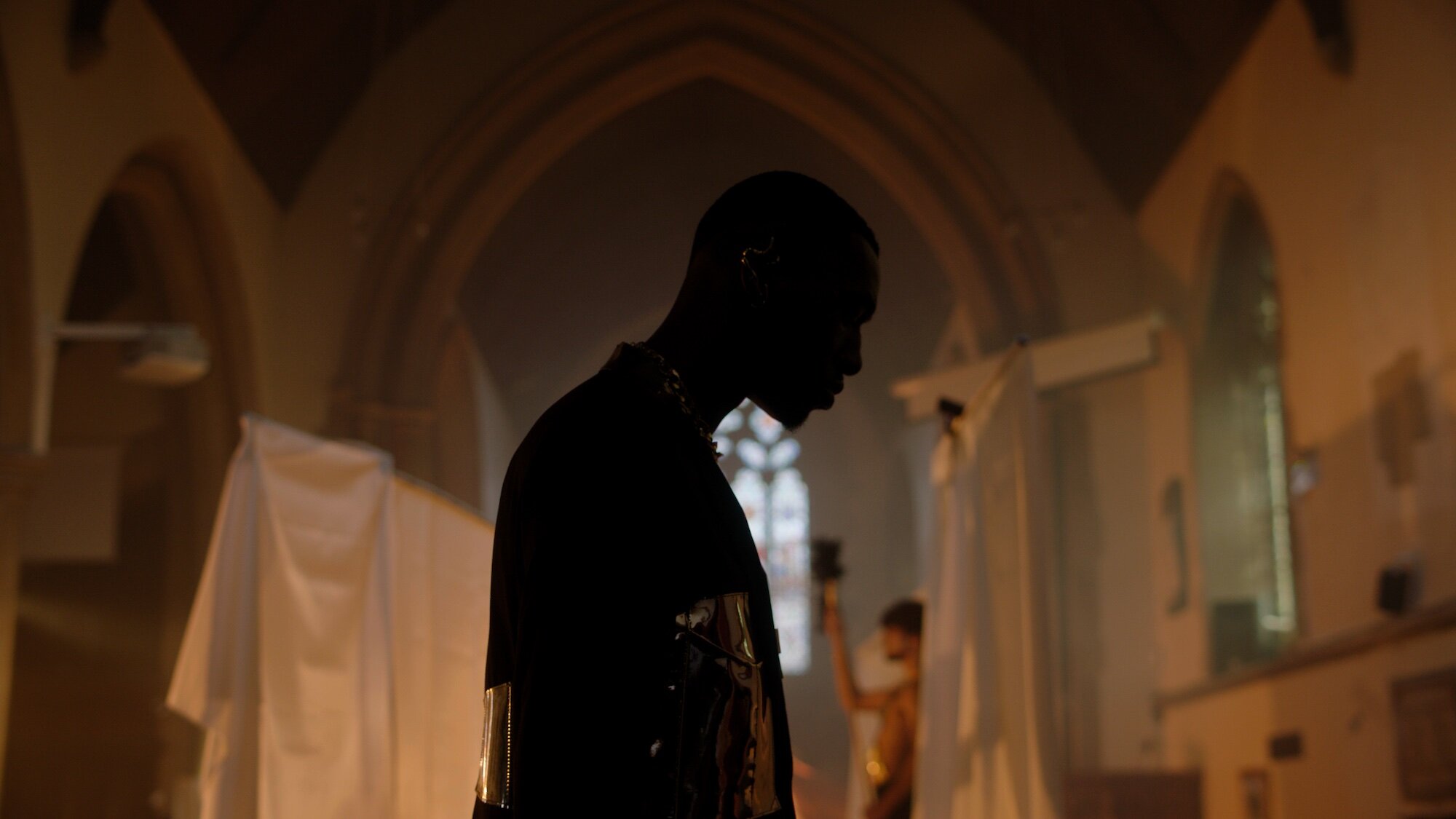 In a melding of reality, fantasy, yearning and repression, Director Christian Goue has concocted a mythic music video which challenges stigma and reconstructs history. Created for Julez Lorenzo and his forthcoming EP, Static Signal is a delectably lavish, desire-laden video. The narrative begins with a group of friends around a dinner table with eyelines between secret lovers and hidden truths of repressed emotive connections sizzling beneath the surface. Goue then thrusts the viewer into the emotional worlds of his characters, using movement and choreography to channel their inner desires against a background populated with historical iconography. It’s a thoroughly gorgeous video that we felt compelled to learn more about and so caught up with Goue to ask him about his spiritual vision for the video, the creative freedom of working with less established musicians, and the tricky process of shooting the entire video in a single day.

How did Static Signal come together?

This project was about falling in love again with short form. Between the pressures of writing feature films, working in TV and finding the right agents to represent me, it’s been easy to get lost in it all and forget the reason why I’m on this journey. To explore my passion for creating beautiful and emotive films. So for this project, I really tried to forget about everything and focus on just creating something cool while having fun throughout the process of making it.

What was the balance of creative control on the film between yourself and Julez?

Navigating commissioned projects with less established musicians gives more freedom to create and avoid all the politics surrounding major labels, agencies, Film/TV studios. That being said, Julez definitely had a strong vision. In the end, we managed to create something beautiful together that encapsulated Julez’s style but also stayed true to my craft.

What elements of the song initially connected with you and inspired your vision for the video?

The first idea that came to mind after listening to the song was obsession, the pain of unrequited love and how lust and desire can lead to immorality. I think many people will get this message from the song. In addition, Julez sent me an idea board he created with some of the themes he wanted to hit on for the project, in particular references to ancient Egypt. My job from that point on was to bring it all together and find a way to create a narrative that showed the twisted nature of love and obsession, incorporating ideas from Egyptian ancestry to portray beauty and darkness.

We managed to create something beautiful together that encapsulated Julez’s style but also stayed true to my craft.

Outside of any lyrics or meaning, for me, music has always been a sort of book that guides me toward specific emotions, ideas and colours. A cumulation of layers that are often blurry but enough to spike something that pushes me into a research journey and give a clear picture to those emotions. 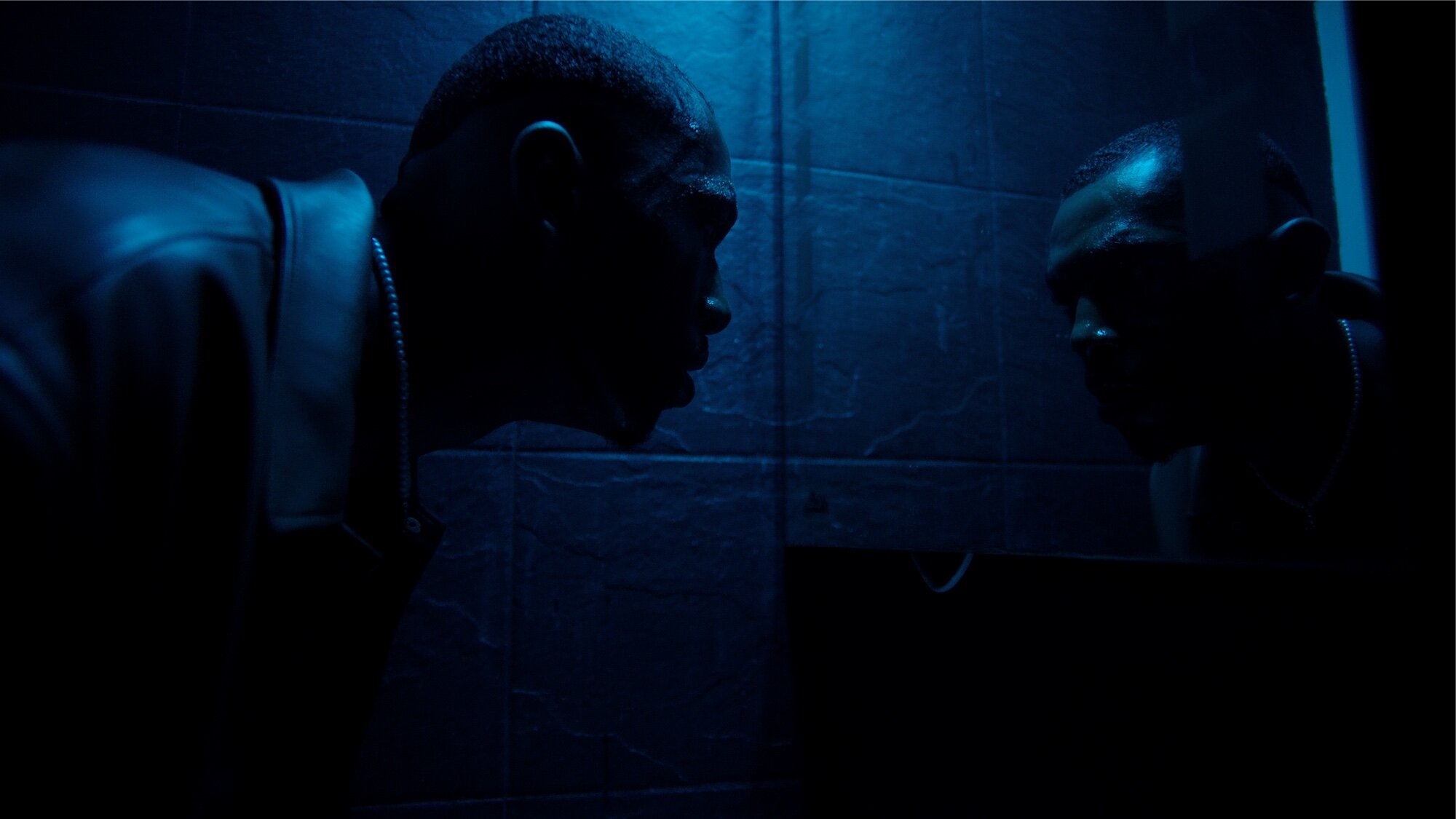 In the case of this music video, it was really important to mix fantasy with reality. Most people experience unrequited love at some point in their lives, yet despite us being united in this, the pain and desperation that can come from that experience can feel otherworldly. Hence why the opening scene is grounded in reality before Julez is transported to a new world as he tries desperately to resolve the toxic love triangle he has found himself in. One component of this was the use of white eyes, this nod to horror was to show how with pain and heartache people can lose themselves and become or see others as ‘monsters’.

The idea of ghosts also plays a strong role in the narrative. When developing the story, the idea of Julez being ghosted by his love interest got stuck in my head so we agreed that death had to come into play at some point. And what’s more shocking than seeing someone you killed in your head coming back to haunt you in real life?

How does your spirituality and culture inform your work?

Spirituality and culture hold a special place in my heart as a filmmaker. Being Muslim from Ivory Coast, I’ve always been curious why my family chose and has such a strong attachment to Islam despite there being so many other indigenous religions from Ivory Coast that better match our culture and traditions, and are in many ways less restrictive than more widely practiced religions. This subject informed my previous work and with the chance to film the music video in a church, I was able to continue this exploration. Just to say that when our thoughts are in good places, happy accidents always happen.

For this project I drew a contrast between how Christianity has historically rejected same sex relationships, while in contrast Ancient Egypt seems to have accepted many forms of love and identity, including homosexuality. I wanted to explore this in a subtle way, keeping the interior of the church on show while transforming the altar into an ancient Egyptian palace. All credit for the great production design goes to Maya McAllister Demangeat, who did an incredible job despite having minimal budget and less than desirable foundation for an Egyptian oasis.

Did you shoot over multiple days? There’s so much great detail in the costuming and production design, I imagine it couldn’t have been quick to shoot.

We shot the video over one single day with extreme effort from the whole cast and crew. Under such a tight schedule DP Harry Nelder and I had to come up with a setup that would give us almost all possible options of camera movements to capture literally everything. We used an Alexa mini plus a set of Cooke S4 lenses on a Mōvi stabilizer system. Harry and the teams in the camera and lighting department produced a level of productivity/quality that is very rare for such low budget productions.

Do you have a favourite scene or shot composition?

My favourite scene to direct for this project was the opening scene “the friends gathering at the table”. This was a dream situation for me as a director as it required a strong performance by the cast. Things unfolded naturally and no written script was needed. I gave them bullet points of situations and subjects to explore, focusing on keeping conversations energised and natural, and they really pulled off something beyond expectation. For me, there was more risk in writing a script as I hadn’t met the actors before and didn’t want to lose the repertoire that already existed between this group of friends. My decision of directing a sequence like this relies on how confident I feel about the cast and their state of mind in that moment. I’m also a fairly confident writer and know that if it didn’t work I could quickly draft something up.

In the case of this music video, it was really important to mix fantasy with reality.

Overall, the project has been a massive team effort with seamless collaboration between all heads of departments. We were all driven by our love for the craft and we felt that from the choreography rehearsals session with our Choreographer Ché Barret-Davis, all the way to wrapping on the day of production with everyone else. 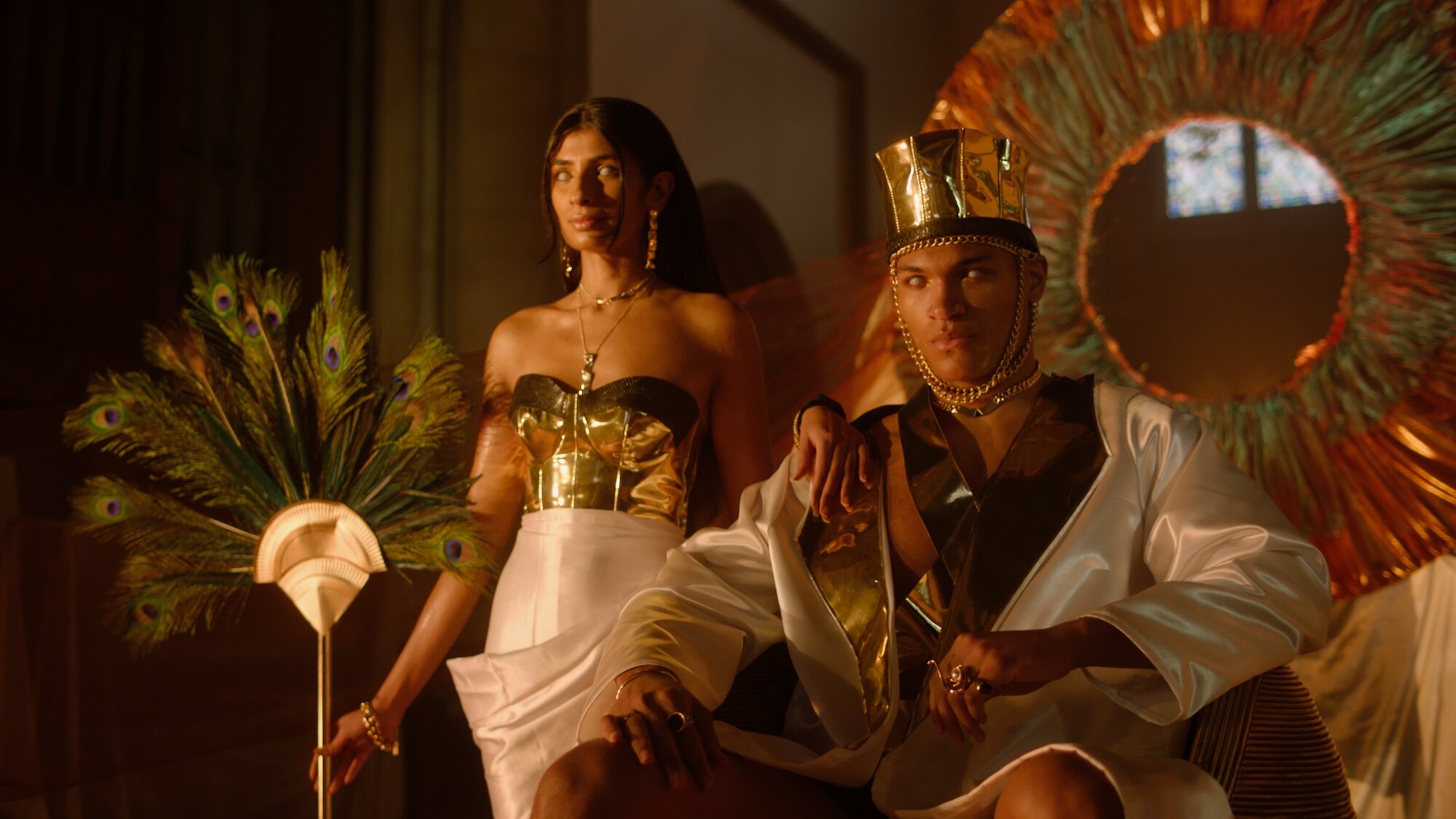 What can expect from you next? Do you see yourself returning to more projects like this or venturing off into different forms?

I’m currently spanning my time between developing a few long forms, producing for TV and directing commissioned work and passion projects. The past year, I felt like it was time to transition into writing and directing long forms but I got so caught up with this idea that I shot down some great short narratives and experimental stuff I had written. The next step for me is making those short projects alongside commissioned work. They are more challenging than anything I’ve done – a massive consolation to my ego, ha! So I will be taking out time to enjoy the process of making more short form projects while pitching those full length films in development.