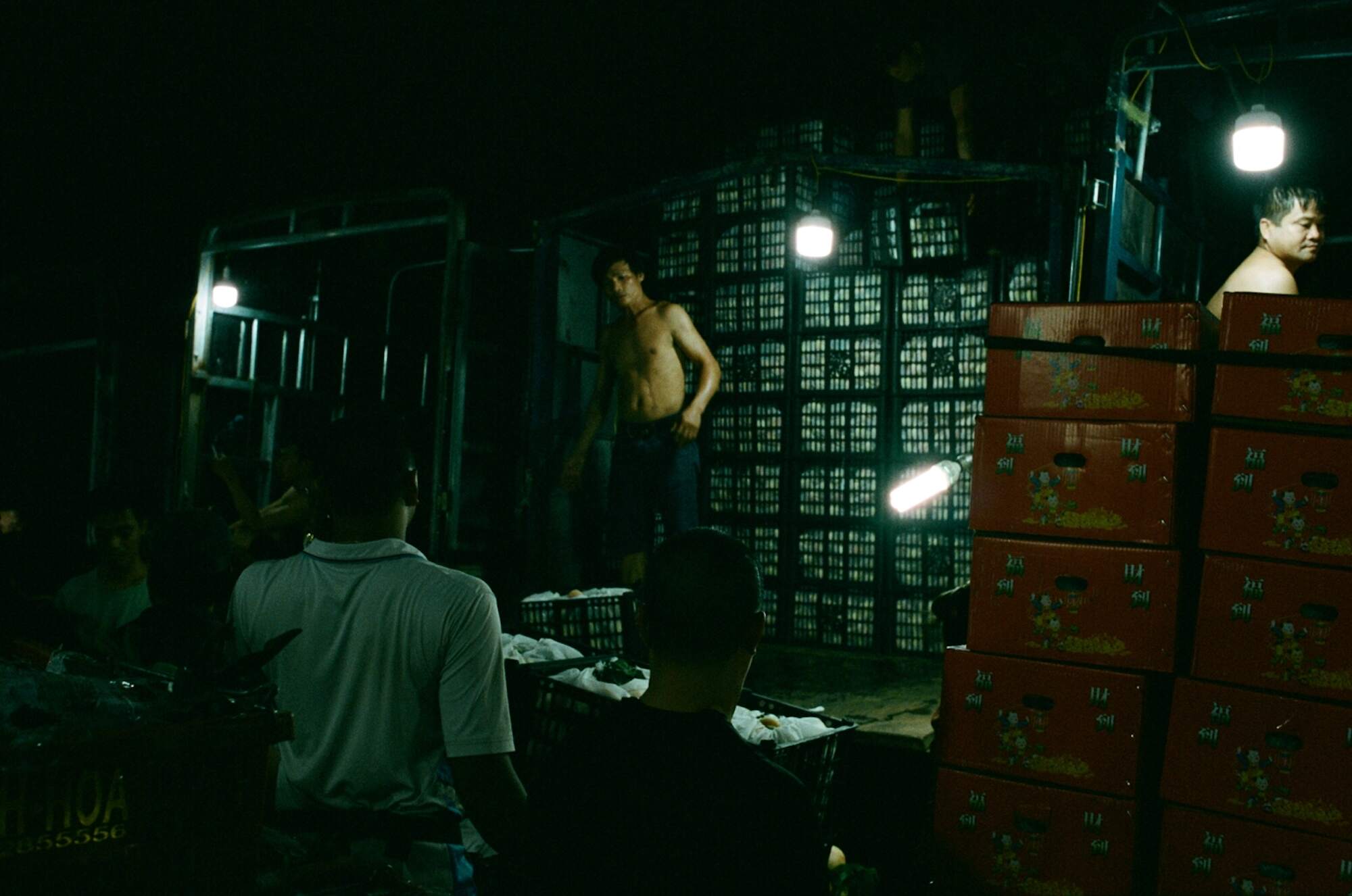 At a key moment when worker’s conditions and rights are being brought into the spotlight, William Williamson’s short documentary All For You highlights the backbreaking struggle of everyday manual labourers in Hanoi, Vietnam’s immensely vast wet market. Williamson centres his film on Dang Thi Van, a single mother who has recently returned to work after she sustained a major injury to her back. Williamson guides us through one of Dang’s shifts, taking a fly-on-the-wall approach, as she unloads stacks of cargo before moving it through the densely populated market. It’s an incredibly eye-opening film and, despite its brief runtime, manages to showcase the extensive scale of manual labour found on the fringes of the world’s super economy. DN is proud to premiere All For You on our pages today, alongside a conversation with Williamson where he discusses the spontaneous encounter that inspired his film and the observational approach he took to capture it.

I’m curious to know what propelled you to tell the story of a single mother and her life working in the wet market of Vietnam?

This short didn’t really develop in the traditional manner, it was more that I stumbled across it. I was in Hanoi filming a branded content music documentary and on an evening off I wanted to explore the Long Bien Bridge, which I had been told was built by Gustave Eiffel, the same architect who designed the Eiffel Tower. Whilst crossing it I looked below to the river’s edge and saw a wet market surrounded by slums. I was taken back, in Europe the Eiffel Tower is the epitome of grandeur and surrounded by wealth, yet here it was the total opposite. The bridge itself is the last shot in the film.

What was it about the wet market that caught your attention?

The market was a complete attack on my senses. It was chaotic and claustrophobic, filled with people carrying out backbreaking manual labour. The work was palpable and extremely uncomfortable to witness.

The work here is visible yet equally invisible and I was captured by this tension.

Of course, like many people I was aware of modern slavery and its manifestations around the world and its levels of extremity. This environment was not one of the most extreme physical expressions of it, but witnessing the struggle of the labour in this context, and seeing how difficult the repetitive work is and how dire its consequences are, was extremely affecting. I wanted to understand more about it. Above the slum and the market, the city passes by but no one seems to be paying any attention to it. The work here is visible yet equally invisible and I was captured by this tension. As I was coming to the closing stages of the commercial shoot I spoke to Adric Watson, the excellent cinematographer of the documentary and the local crew about this environment, and from here an interest in returning with a camera developed. 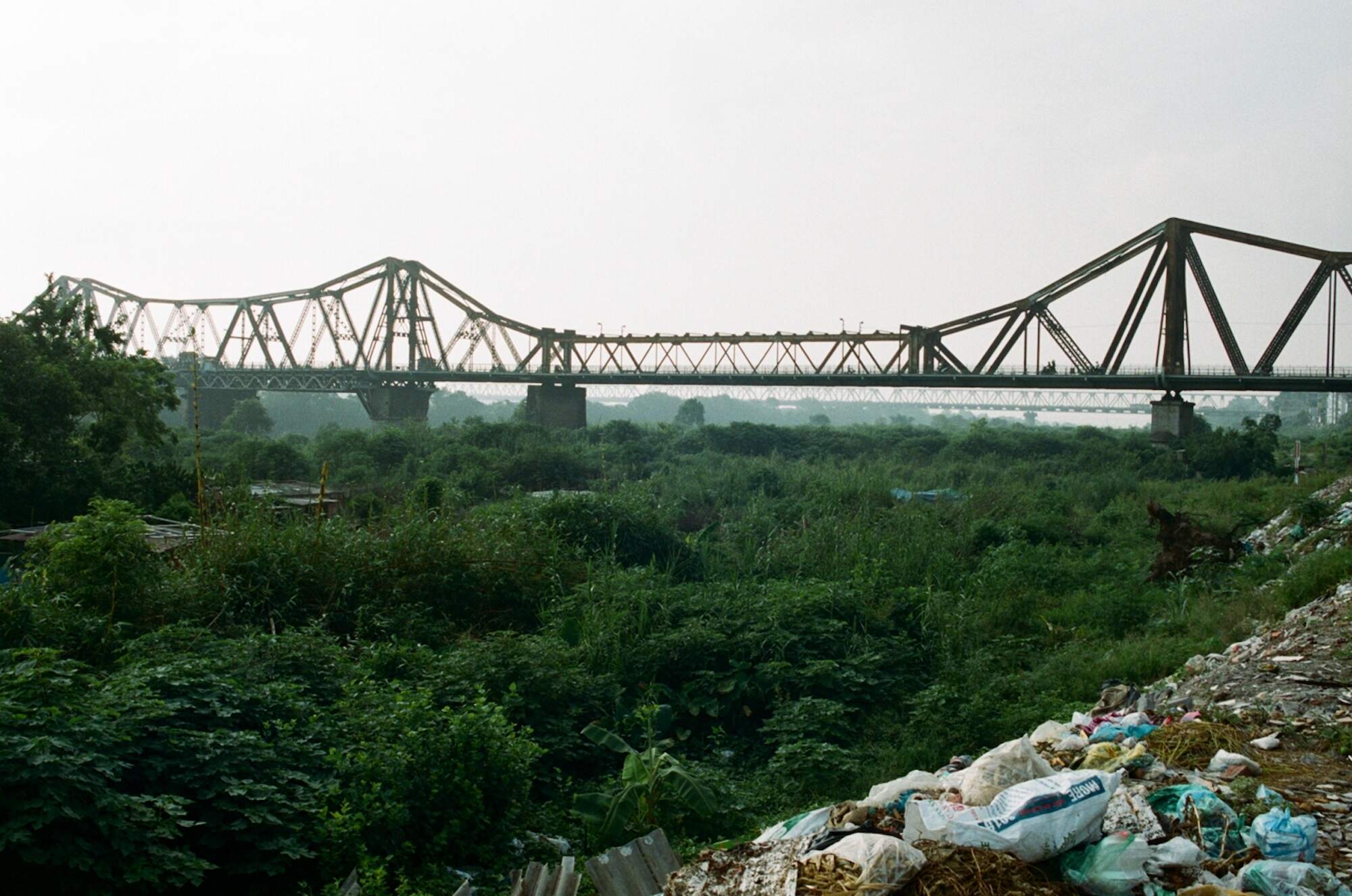 Where did you go from there? Was it a case of meeting with Dang Thi Van and learning more about her story?

Adric and my approach was very much one of curiosity and discovery. We wanted to step away from the traditional process of filmmaking which is filled with pre production, shots lists, blocking, etc. and just watch and listen to the people in the market. We spent one evening together walking through the environment and soaking it all in, getting more comfortable with space and the complexities of potentially shooting there. After this, we returned with a local producer so we could open a more detailed dialogue with the people.

It was on this night we met Dang Thi Van, and with Tidus the local producer being able to translate, she told us how she had only just returned to work because she had broken her back from her hard labour. Before this she had not had a day off in ten years. Her experience was so moving and even though we didn’t share a language we all connected and felt driven to tell this story.

Despite All For You’s six minute length, you do really get a sense of the size and operation of the market, how did you want to visually and thematically explore it?

Obviously exploring the theme of physical labor and slavery in the short film context is extremely complex. Not only is it happening on a global scale but equally Dang was one of many people in this market having to work in these unacceptable conditions. So with that in mind, we made the creative decision to bring in as much of the market as possible, to visually move through the space touching on the entirety of the workforce to make sure that the scale of the story was evident.

What filmmaking kit helped you achieve that?

We made this with the smallest kit possible for a shoot. We just had a camera and boom mic setup. Adric owns an Aaton 16mm camera, I had travelled with my own boom sound kit and we had only one reel of film left over from our previous shoot. So between Adric, Tidus and I, we had just enough equipment and manpower to make this short documentary.

It was crucial to us that we documented the process as accurately as possible and respond to the market. We did not want to assert any direction or influence.

How long were you shooting in the market to capture everything you needed?

We shot over one night. We started filming in the early evening, then Adric and I left to get an hour or so sleep before returning at 5am for the pack down. With very little film available we obviously had to be very selective in our choice of shots and capturing the actuality. With it being a personal project and no financial backing this was edited over a number of months. 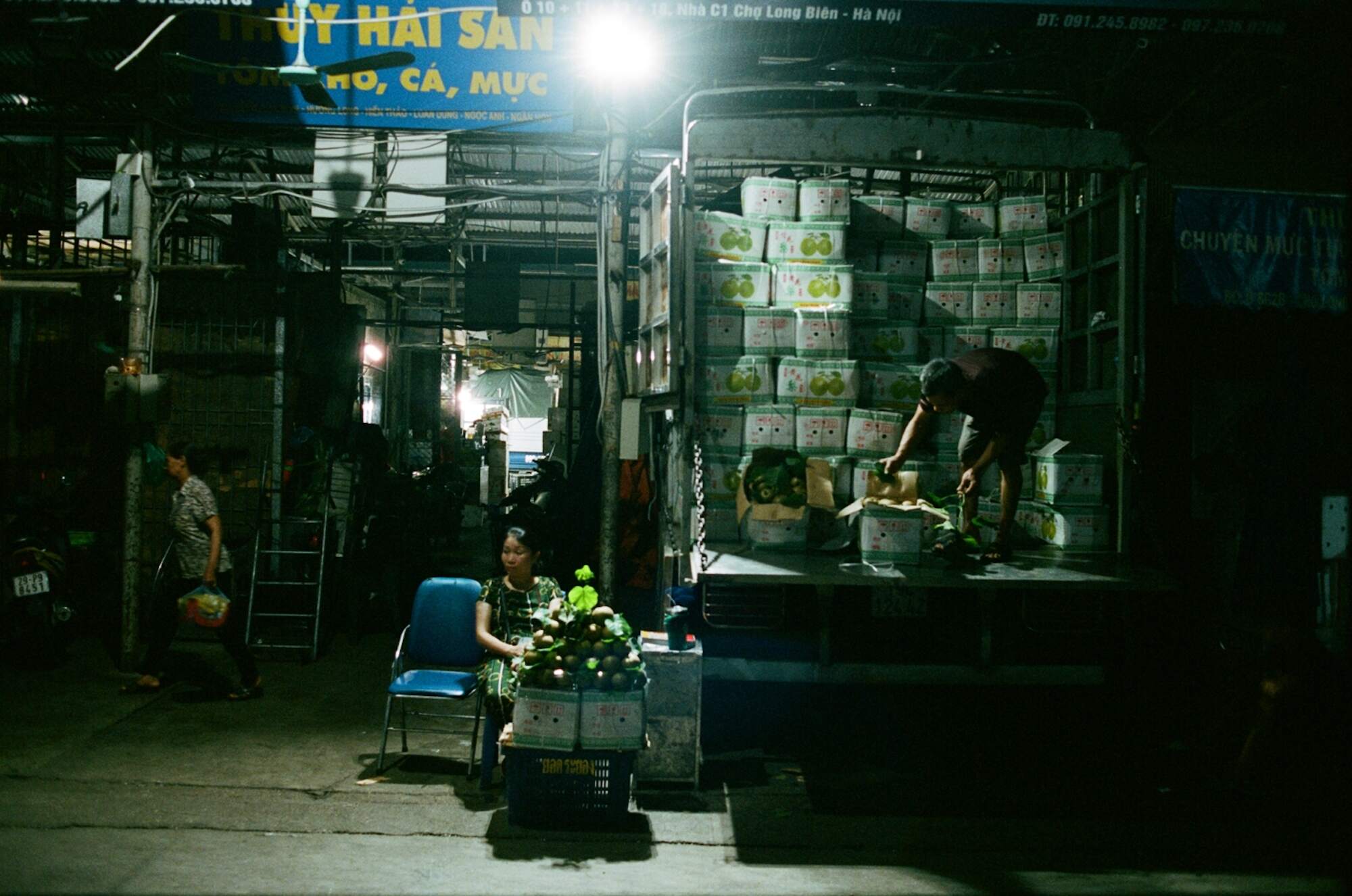 Given the spontaneity of the shoot, how much planning went into your shotlist? Or was the film entirely captured on the fly?

There was no shot list at all. We really didn’t know what we were going to make as we started it. Of course, there was some measure of control in that we had the seed of the story but our aim was just to absorb the environment and react accordingly. It was crucial to us that we documented the process as accurately as possible and respond to the market. We did not want to assert any direction or influence. The market was overflowing with energy and it really hammered us, as you can probably see from the photos Tidus took.

What conversations do you hope to spark with All For You?

For me, this film raises conversations about postcolonialism in Vietnam whilst being a reflection on labour and workforce. The market in Hanoi is one of many across the world and it reveals how uncontrolled growth and speculative capitalist greed have generated unacceptable working conditions that patently discriminate against the lower classes. Alongside this, it tells the story of motherhood and how unconditional love will push through the hardest adversity.

I’ve just wrapped a shoot in Rio and once that is complete I’ll be working on two long form projects that are still in development. One is a feature documentary about a historical case of injustice and another is a narrative film which I’m writing.