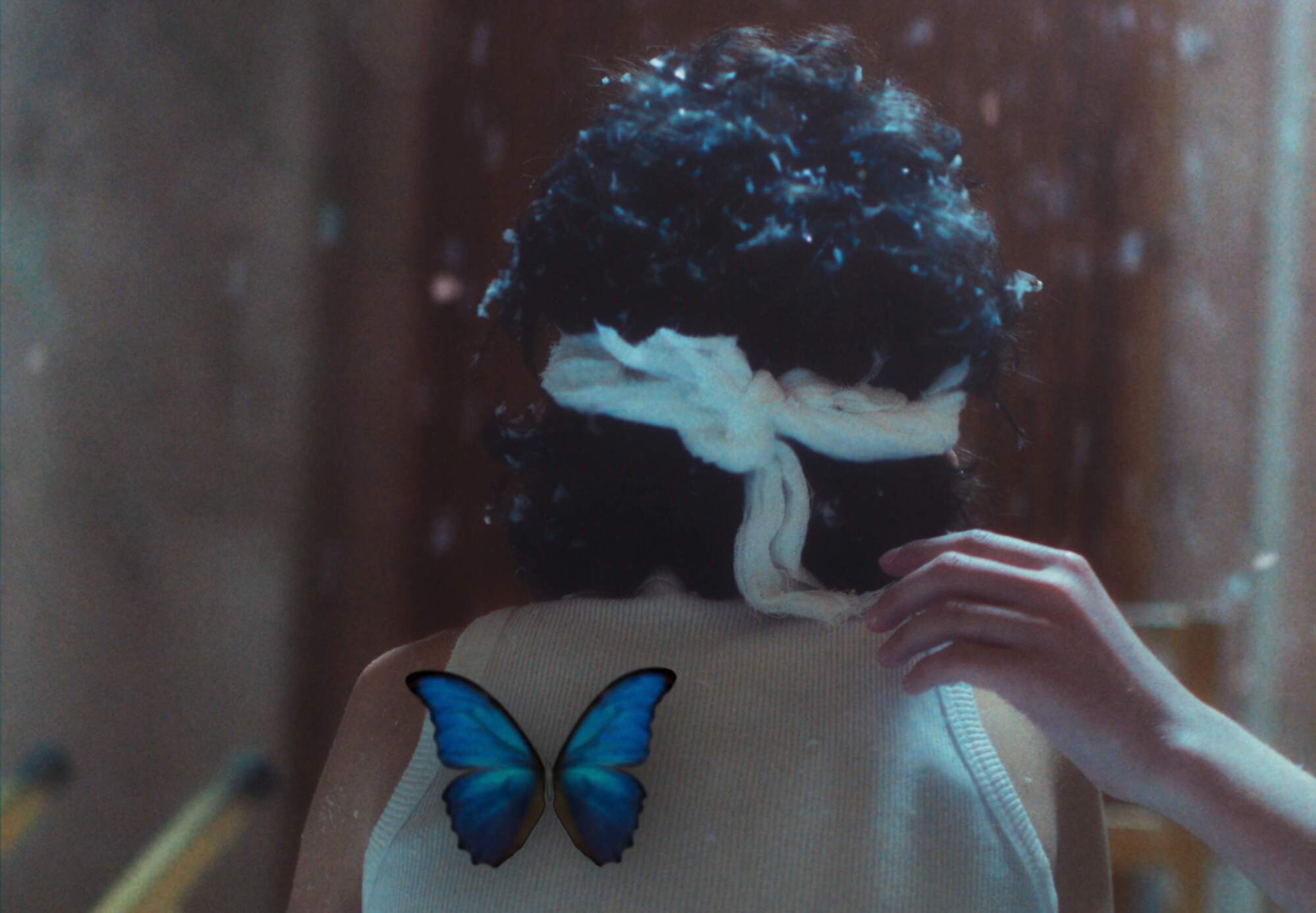 Filmmaker Argam Gevorgyan’s experimental/music video hybrid short La Beaute takes the song of the same name by PALINA and envelops it with a story of twin Armenian brothers who have to face a tragic goodbye. The most striking aspect of Gevorgyan’s film is its vertical format, this is a film designed to be watched on a phone. The vertical imagery makes for an aesthetically pleasing stylistic choice, with each frame tightly composed with a strong eye for detail, but it’s also a thematic one, reflecting the penned-in world Gevorgyan’s characters find themselves in. DN is excited to present the film on our pages today and joined Gevorgyan for a conversation where he discusses the creative motivations of the vertical format, his ongoing relationship with Armenia’s history, and the challenge of getting the film off the ground financially.

What was the beginning of your collaboration with PALINA on a film for La Beaute?

The film La Beaute started with the idea of shooting the next project for our start-up platform, JEM. The song La Beaute by the artist PALINA is unique. I decided to tell a story based on it. It’s a combination of neoclassics and motifs of the legendary Charles Aznavour, of whom I am a fan. The documentary photo Arranged Wedding taken in Afghanistan, Kabul, really shook me up and after interpreting the image in my own way, I started developing the script. The image of each character, each model in the fashion show was created from scratch, referring to one character or another in the film or event.

It’s an ambitious production in regards to the cast, costume, and period production design. How was it getting the film off the ground in its early stages?

Independent film production is certainly a very complicated process, my friend and Producer Nikita Shestakov and I were looking for funds for seven months, and during that time the script was transformed with new details.

Similarly, how did you find the process of assembling your team? Were there particular attributes you were looking for in each department?

Each member of the team is a genius, everyone deserves all kinds of applause. All along the way, Alexey Khaustov, a talented director of photography, moved with us. Also, I can’t help but mention the acting of Gosha Torvich, who has an incredible future in filmmaking.

I continue to explore the riches of Armenia and want to connect all my films with this particular invisible thread.

What draws you to exploring Armenian history and culture in your work?

My father Vaagn Gevorgyan, listed in the opening credits with my mother Anna Virabyan, was and still is a great support. My introduction to Armenian culture began with my upbringing in an Armenian family. I continue to explore the riches of Armenia and want to connect all my films with this particular invisible thread.

What led you to present the film in a vertical format? Was it a stylistic choice or a thematic one?

These limitations in the form of vertical format are due to the concept of the start-up platform and production JEM, where we create original narrative stories using the possibilities of this format. The vertical format, in addition, affects all available channels of perception. The audience has a different sense of the texture of the cinematic history, which tells vertically. It was recently revealed to me that one of the most important figures at the origin of cinema as an art was Eisenstein, in 1932, who proposed to rethink the established film format and try vertical.

I cannot stop myself from quoting the book The Power of Art by the astonishing author Simon Schama. Exploring the artist Rothko’s work writes “The vertical format, which he favoured in the early 1950s, partly served as a tool for controlling the number of visitors: according to the artist’s calculations, only a limited number of people could gather in front of a single painting, and emotional interaction with the viewer could be made more targeted. Ideally, Rothko wanted a single person to look at the picture with care and without distraction”. The film La Beaute is above all a conversation with the spectator of any place in the world. Holding the phone in his/her hands, passing the station in the subway or in between lectures, the viewer is immersed in the universe of the film and a communication is born, which has no frames – vertical or ordinary.

Aside from how it informed the story, did PALINA’s song affect how you edited or structured the film?

I consider myself to be one of the principal directors in the pre-production period. The countless presentations, storyboards, and editing vision that has been forming so far have allowed the film to be structured in a symbiotic way with PALINA’s song La Beaute and the story I wanted to tell. The lyrics from les yeux de celui qui regarde, the eyes of the beholder, were the starting point. The film was scheduled per second so there was time for improvisation on the set. Amazing film Editor Vasily Ilyushechkin edited the draft on storyboards and after a while we began to try other ideas, matching the dramaturgy of the two minute song of PALINA with the filmed hundreds of gigabytes of material. Because of Vasily’s sense of rhythm and tempo, the film has become more packed with montage movements.

During the fashion show sequence there’s this beautiful effect of particles falling in the air amongst everyone, how did you create that? Was it practical or computer generated?

Snow/particles were generated by me in post production. The idea was to create a dramatic connection between the real hero and his past, that is, an important memory. This scene of the fashion show was shot in the mode of ‘reportage shooting’, highly professional operator Alexey Khaustov, having shot the right number of frames for editing, began shooting almost everyone and everything. We made this decision with absolute time and budget constraints, and the quickly generated solution helped to create a scene in this way.

The vertical format, in addition, affects all available channels of perception.

Now I’m interested in working with a shorter format, a commercial, where the skills of dramaturgical storytelling and understanding of CG/VFX graphics could flow into deep and complex staged projects. In addition, I am currently developing scripts for the trilogy in interaction in all senses with the cultural heritage of Armenia. It’s a very difficult task for an independent production, but La Beaute and our unwavering love and faith in the creation of the film have shown that the dream, opportunity, and faith of an enthusiastic production team are capable of anything.