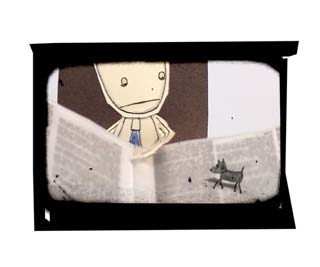 The goings-on in the miniature town of Clusterville have become of growing concern to the creator of its human and mechanical inhabitants. This concern leads the creator to end the experiment by bombing the town; however, with moments to go, his interest is peaked by one of the mechanical men and his master.

The visual style of Stephen Irwin’s six and a half minute animation Dialog was heavily influenced by comic books and graphic novels. “I wanted to use a spatial narrative similar to that found in comic books, in particular the works of Chris Ware. I didn’t want to simply fill the screen with single shots, but instead fill it with a number of micro-narratives that form a montage of shots and scenes.”

Dialog features a combination of stop-motion, 2D hand-drawn and digital animation brought together in Adobe After Effects, with additional work in Photoshop and Premier. Miniature sets and characters were constructed using paper, cardboard and other bits and pieces Irwin found around his flat. These were then photographed with a digital camera before being treated and sequenced in Photoshop.

Due to time and money limitations, Irwin was fortunate enough to find, through an advertisement in UK Screen, a musician and voiceover artist who could produce their pieces at home for no money and send him their completed work electronically. Of the numerous pieces he received, Lee Miller’s score and John Sweeney’s narration best complemented the animation in Dialog, greatly contributing to the effectiveness of the finished film as a whole. Irwin has completed work on another short animation, titled Bows and Arrows, which can be seen alongside his other pieces at Small Time Inc.