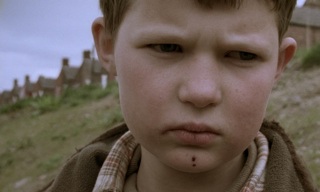 A well-worn maxim suggests that it’s always best to create stories about ‘what you know’, and Yousaf Ali Khan’s accomplished short Talking with Angels goes a long way to show why this is advice best followed. Based on Khan’s own childhood and created with the intention of bucking the social ideals of what constitutes a ‘normal’ family, Talking with Angels tells the story of the struggle faced by a poor family as they make their way through 1970s run-down Salford to a clinic for their schizophrenic mum’s regular injection of Largactil, a drug to dampen the voices and visions that plague her and those around her. Viewed as spacs and weirdos by the people they encounter on the journey, it’s 10- year-old Alan who takes charge and must battle with the shame imposed on him by the outside world for the family he loves and belongs to.

The script for Talking with Angels was intensely written over a two-week period when Khan, having recently finished his previous short Skin Deep and keen to make another, found himself with a looming deadline for the now defunct London Production Fund. Although he received a £15,000 contribution from the fund, the project was stalled for a year when the original production partner APT was unable to provide the balance of the budget. During this hiatus, Khan and producer Michael Knowles – who while programming the Commonwealth Film Festival in Manchester had called a strand of shorts Skin Deep after being impressed by Khan’s film – came together through their mutual love of Manchester and a desire to make films there. They also shared an ethos of involving the local community in projects while trying to provide training that would prove useful in the long term. Once APT stepped back and Northern Films and Silver Film picked up the project, the shoot could begin. They took on around 40 trainees and started the Salford Film Festival. The production’s ability to use professional actors was limited, so the local community was mined for talent in open casting sessions, where they found first-timer Stephen Buckley, who was cast in the lead role of Alan.

Going the digital post route, the work of DP David Katznelson and director of visual effects Robert Bradbrook was brought to life once grading and VFX were completed at DFL in Copenhagen. To date, Talking with Angels has screened at over 40 festivals worldwide, picking up awards on the way. Its success has led to the formation of production company, Made Up North, whose remit to develop new talent was boosted by the raising of £250,000 in additional funding to assist the development of several new projects, including more work from Khan.