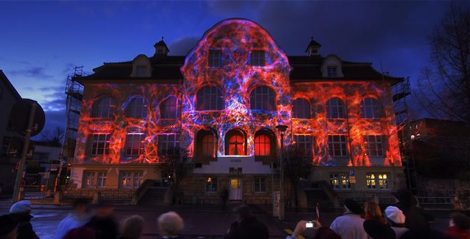 Past guest Robert Seidel (DN065) puts his experimental approach to animation to work on a canvas worthy of his talent. In his own words: “processes: living paintings” is a 35 by 16 meter full facade projection with a corresponding light choreography, ambient music and synced sound effects shown on the 2/2/2008 in Jena, Germany.

Not satisfied with a continuous repeated loop, Seidel created a 17 minute ambient soundtrack that shifted constantly to create singular experiences with each viewing. Clever stuff!

The stills and videos look great, but do make me feel a pang of jealousy at not being able to stand out front and experience the piece first hand.