Zombies, zombies, bloody zombies. We really should be sick of the sight of them. The most annoying thing about them is that regardless of how many zombie films come along people keep on making more of them. On the flipside, every so often someone comes up with a decent take on the shuffling corpse and most of the awful films don’t make it as far as the cinema. They have a much better hit rate than vampires and with good reason; zombies may have no emotions or feelings, but that’s a hell of a lot more appealing than being angst-ridden, self-obsessed, immortal teenagers. No-one is scared of vampires- if a vampire kills you, you slowly fade away in the throes of sexual ecstasy. If a zombie kills you, you’re torn apart screaming in unimaginable pain. If a vampire turns you, you become a romantic pale-skinned ponce- much like how Pete Doherty sees himself. When a zombie bites you turn into a stinking mess with decaying flesh and unwashed clothes- essentially how the rest of the world sees Pete Doherty. Therefore zombies are more scary. 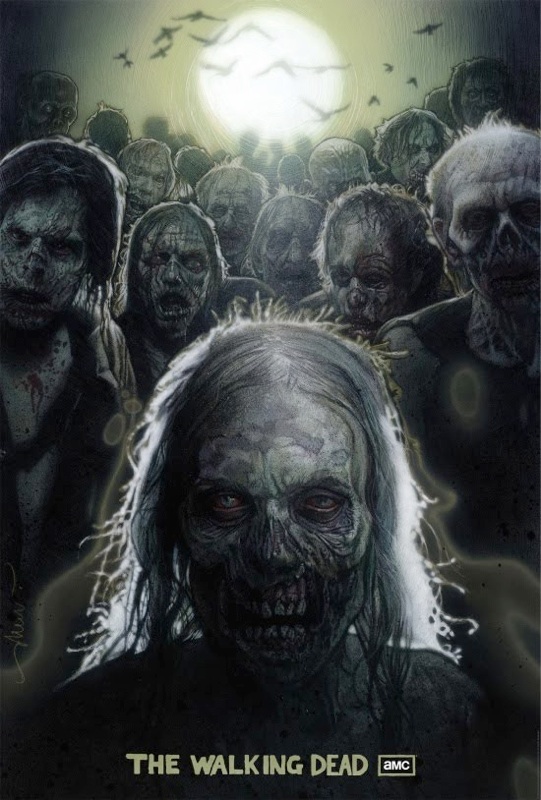 It seems that every filmmaker and writer has spent his (or her, but let’s not kid ourselves here) life waiting for the chance to give us their take on the zombie story. This new era seems to have begun with the not-technically-zombies zombie film 28 Days Later. Danny Boyle’s straight-faced tale of running zombies was then answered by Edgar Wright and Simon Pegg’s shuffling zom-com Shaun of the Dead. Since then there’s been a consistent run of original takes on the genre.

So news that Frank Darabont was taking time off from making decent Stephen King adaptations to helm a TV version of Robert Kirkman’s The Walking Dead comic series was met with excitement (not least from MarBelle). The first episode aired in the UK on Saturday so in quality terms was it a Dawn or a Diary of the Dead?

Spoilers ahead!
After an attention-grabbing first scene that has cop Rick Grimes (Andrew Lincoln) shooting a zombie child in the head, the programme rewinds to the events that led Grimes to be unconscious in hospital when the zombie outbreak occurs. It then steals the same scene from Day of the Triffids that 28 Days Later borrowed, with Grimes waking up in an apocalyptic world seemingly free of living beings. He then spends time with a father and son who are squatting in a house on Grimes’ road, being haunted by zombie-mum. Here we get a measure of a world where everyone you know is dead, or worse, undead. After this, Grimes heads to Atlanta to get chased around by an army of shuffling evil, hungry for the innards of anyone who appeared in This Life ‘walkers’.

So far, so good. It’s cinematic in its scale and look, the atmosphere is incredibly tense and the emotional realities of the situation are well written and convincingly performed. Lincoln not only comfortably carries the narrative but also has a decent American accent. Accents are a curious British concern but they can be distracting for us if done badly. The only criticism is that thus far it hasn’t gone into any areas that haven’t been fully covered by previous films- the Triffids scene, the parent/child survivors and scenes of devastation are all conventions of the zombie and post-apocalypse genres. Its only unique aspect so far is that it can spend time with character development- something that’s difficult when you’re limited to 90 minutes and have to squeeze the dialogue around imaginative undead slayings. So now Darabont’s got our attention, what’s he going to do with us next?

3 Responses to The Walking Dead: Episode 1