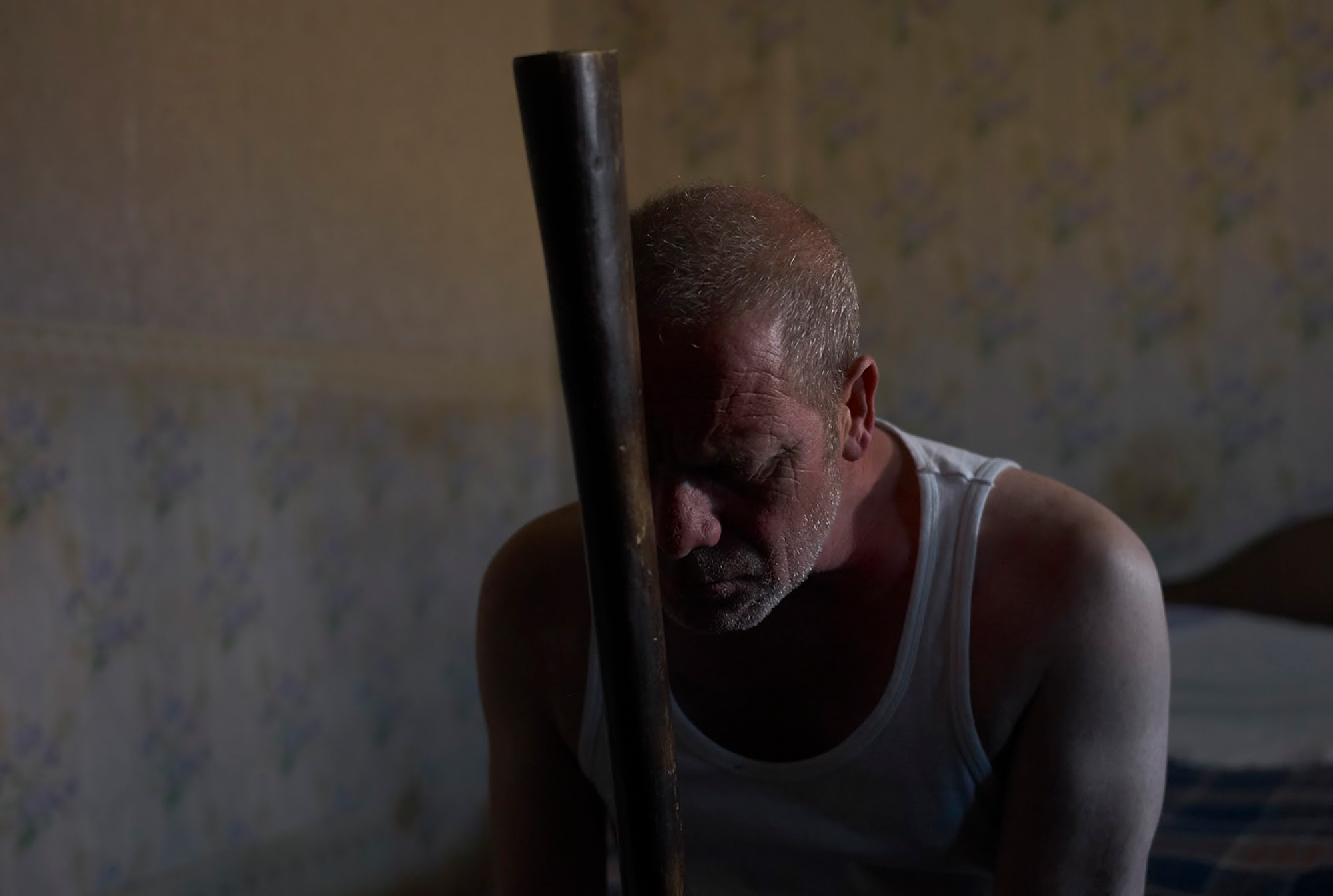 Let me preface this review by saying that I’m one of them ones with a lady garden. Having been subjected to the chatter of philosophical men (suspected) film students on the way out of the screening who used the word functional far too much and talking about the film with him indoors on the tube all the way home this may taint my review somewhat.

Tyrannosaur is the directorial debut of Paddy Considine who you may know from Dead Man’s Shoes, A Room for Romeo Brass, Hot Fuzz or as the guy who ran across Waterloo at the start of The Bourne Ultimatum. Basically if you don’t know who he is you’ve been asleep for around the last 10 years of film, and this review is probably not for you.

I have admired Paddy’s work for a long time and have been looking forward to Tyrannosaur more than is probably acceptable for a normal person. As if divination wanted to make my life even better, I happily stumbled across a screening at the Curzon Soho on its opening night followed by a Q&A with Paddy and one of the leads, Olivia Colman.

Tyrannosaur has its roots in a Bafta winning short called Dog Altogether. The films follow the lives of Joseph (Peter Mullan) and Hannah (Olivia Colman). Joseph lives on a sink estate. His life encompasses gambling, drinking and extreme violence borne out of lifestyle and deep set anger. Hannah is middle class and volunteers at a charity shop. Hannah is a Christian but that is not her lifeblood. I got the impression that she was forgiving and lovely whilst shaded with Christianity. Dog Altogether follows Joseph’s rage and his necessity to find something better. Someone to make him better. He finds Hannah and that is where the short ends. Tyrannosaur explores the relationship that follows their meeting.

From the beginning Tyrannosaur is brutal. Joseph is mindlessly violent due to an internal rage that will always burn within him. This rage manifests itself by lashing out at those closest to him as well as anyone who annoys him. Joseph’s surroundings means that violence begets violence and there are revenge attacks.

Following one such attack he seeks sanctuary in Hannah’s charity shop. Most people would throw a bloodied, rude, old drunk in to the street, but her goodness compels her to talk to him and offer him a cup of tea. He accepts and mellows. But, as is his way, he hurts her by making assumptions about her middle class life that are way off the mark. You realise as the film progresses that Joseph isn’t an inherently bad person. He just won’t let anyone close to him because he believes he’ll ultimately taint anyone in such close proximity. That or he’ll end up with “their shite”. So he tries to steer clear. But in the case of Hannah he can’t, because she is full of goodness and light and she may be his only redemption. But whilst she is full of goodness and light, her life is not. 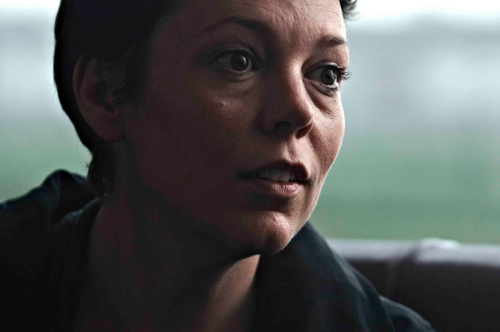 Let me be clear. The performances are superb. Colman, who is mainly known for her comic roles, more than holds her own against Mullan. Comparisons have been made with Nil by Mouth but the only thing I can see in common is subject matter. I found this film ten times more disturbing than Irreversible as well. I’m not ashamed. I’ll say it. I cried! And not the silent tears of the cinema where they daintily fall over your eyes on to your face. No, no. My chin was wobbling like a good’un. And I’m dead on the inside.

The key to a film like this is to know when things should be seen and when things should be implied. Pia Di Ciaula’s editing is fantastic. The film cuts from scene to scene punchily, sometimes displaying the full savagery of the violence, at other times merely hinting at it, such as using the demolition of a shed as a noisy, dramatic device. None of the violence is gratuitous and there are some truly uplifting moments. It’s the mark of a good filmmaker that his audience goes from shocked silence to laughter within minutes.

Eddie Marsan also stars as Hannah’s husband, James. The ‘Philosophical Ones’ thought him “functional” and not fully explored. I desperately wanted to disagree but then I would have been paying lip service to their ‘talking just loud enough so everyone can hear and know how very clever we are’ tactics. So here I am, playing in to their hands on the internet. James is a loathsome character and to explore how he got to where he was would not have been in keeping with the rest of the film. The pasts of Joseph and Hannah are both hinted at and items are implied but nothing is ever said outright. To have done so with James would have been at odds with this. Moreover, I thought Marsan did an excellent job of portraying him as repellant. I immediately saw him for what he was and it was in his smile. Marsan ably evoked the big, insincere smile of a man who charms the birds off the trees but shouldn’t be trusted.

There is no doubt that this is my film of the year thus far and it will probably remain so. But I leave you with a warning – I walked out emotionally battered.

Immediately after the film Paddy and Olivia took to the stage accompanied by the editor of Empire who would be our compere for the evening. I wasn’t sure what to expect from Paddy as a lot of interviews I had read start with how introverted he is and, more recently, his diagnosis on the Asbergers spectrum. He was extremely open and happy to speak as he found. Olivia was very humble and clearly in Paddy’s awe.

In order for me to faithfully report what went on at the Q&A I have to give you a brief synopsis of the film that isn’t full of smoke and mirrors like the review above. Don’t worry, I’m not going to go into a blow by blow account and you will still need to go and see it for yourself (please, please do). 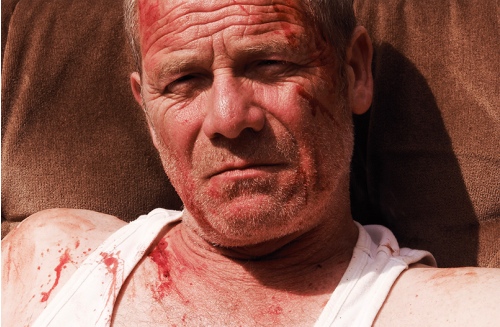 So Joseph is a horrible old man who has no family and ultimately no friends. He is your atypical old man who spends all day in the pub, gets tanked up, talks to the other men who spend all day in the pub but can’t really call them friends, goes home and usually gets in some sort of fight on the way. Hannah is middle class and seeks to save people with the power of prayer. Her husband is also Christian. But he is (and delicate readers avert your eyes) a total fucking bastard who batters the shit out of her. One day he takes it a step too far and pushes her to make the final leap to leave. She arrives on Joseph’s doorstep for help. In the same way she provided him sanctuary he does so too.

Paddy told us how he showed the original Dog Altogether script to Gary Oldman whilst they were working together around five years ago. When he wrote the script he wrote it with Mullan and Coleman in mind. He met Coleman on the set of Hot Fuzz and knew at the first rehearsal that she was to be his Hannah (which also gives an idea of how long this idea has been kicking about). Following on from the Bafta win there was an assumption that it would get made in to a feature. Paddy wrote the feature script in a week, writing for a few hours a day. £1.5million was secured to make it but then Mullan couldn’t get to set for a year owing to other commitments. So it was put on hold and that is nearly where it stayed when the budget was literally halved. But they cracked on and filmed in four weeks in Glasgow with £750k.

Paddy was also very adamant that he didn’t want to use handheld cameras with their telltale shake, nor did he want any ad-libbing. He wanted the mindset of the crew to be a big, British film – on a shoestring.

Olivia was shocked to be cast owing to her acting CV. She did a little research before the film by way of speaking to employees of Refuge. Her initial question when she read the script was, “Why does she not leave?”. Following her research she realised how hard it is to leave. She was also given written case studies from Refuge of real domestic violence victims. Paddy commented how some reviewers have stated that Tyrannosaur is a bit over the top. Both Paddy and Olivia confirmed that when you read the real life case studies you see that Tyrannosaur is a dip in the ocean of what men can do to their partners. Having just seen the film, the documented reality of such relationships does not bear thinking about.

Owing to the emotional intensity of Tyrannosaur which builds as it progresses Paddy tried to film as much in chronological order as possible. This also helped the actors to focus their performance. Olivia said that Hannah was so beautifully written that she didn’t have to suggest any amendments to Paddy. Both commented that sometimes a ‘method actor’ can be a total ball ache – especially when time and budget is tight. However, Paddy was at pains to affirm that the process was also collaborative when the actors were shooting. The nuances of their movements were as important as them reading the script perfectly.

And finally, another script has been written by Paddy. A ghost story. And it’s “alright”. It has “some good bits” (Paddy Considine, Curzon Soho, 6th October 2011).