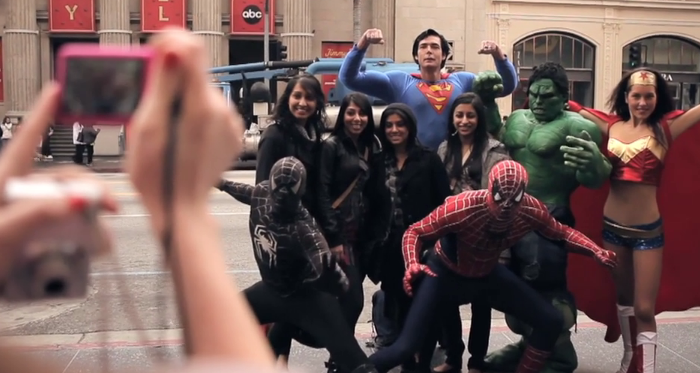 Kai-El, or Superman as we know him here on Earth, arrived from the planet Kypton, according to his origin story. He plummeted towards the Earth at great speed as his birthplace crumbled in his wake. A few years after his arrival on Earth he became a hero, a protector of our magnificent planet. He soon became ‘The Man of Steel’. But, what comes of the great Kryptonian now? Where does this superhero of old lay his cape? California is the place… where else?

In this latest instalment of the enthralling documentary series from Drea Cooper and Zackary Canepari we meet Christopher Dennis, who for the last nineteen years has been impersonating ‘The Man of Steel’. He can be found patrolling Hollywood boulevard along with some of his allies who include Wonder Women, The Hulk and Yoda. But nowadays Christopher Dennis, the Hollywood Superman, only flies in an emergency and shares a small apartment with his doting wife, Bonnie.

Dennis is a born again Kryptonian, he dons the famous red and blue outfit everyday in order to keep the lights on. He spends night after night searching Ebay for his next DC superheroes themed steal, adding to his glorious shrine of Kai-El memorabilia – the couple’s Superman inspired hoard occupies almost every room in their small L.A apartment. But no heroes’ journey is without its challenges; along the way Dennis encounters stiff competition from a Spanish Superman battling for the honour to put a smile on everyone’s face.

Along with some fantastic camera work and truly beautiful music (which is no less than we’ve come to expect from the duo), this documentary explores imagination, love and a larger-than-life superhero.