After the success of their slightly disturbing live-action/animation film Drained, writer/director Nick Peterson once again teams up with actor Jon Heder (taking up the producer role) to start production on their latest short The Visitant. Described as an edge-of-your seat supernatural horror, Peterson’s latest film is the story of a mother who battles to protect her family from a demon intruder in her home. With veteran creature creator Steve Wang lined up to design the titular visitant and Doug Jones doning the costume, it sounds like another ambitious project from the filmmaking duo. Speaking to Peterson via email, we asked the director how crucial it was to get both Wang and Jones involved with the project and what he thinks they’ll bring to his film?

“I want my demon to have a soul and to feel and look as real as the actors in the scene with him. In a CGi creature dominated world, Steve and Doug are some of the top guys in the industry who are doing this kind of specialized, practical makeup work. But they’re not Luddites. Half of their characters start with a guy in a suit delivering a real performance, and that suit is designed to be enhanced by CGI. They understand that it’s not about the technology. It’s about the art delivering performance and character.” 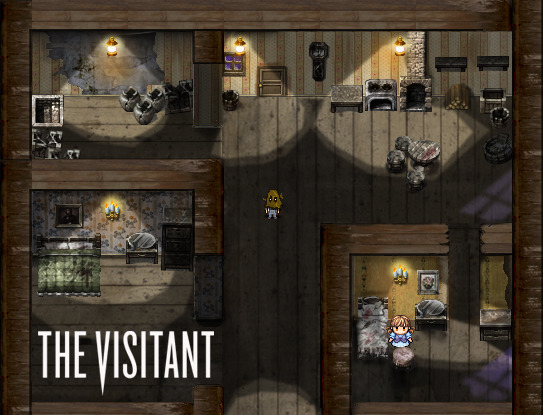 Never ones to do things the simple way though, Peterson and Heder weren’t content with simply creating a film to tell their story, instead they decided to extend the entertainment experience and compliment their movie with an accompanying the video game. But what will this expansion into games add to The Visitant narrative?

“All of this is just the beginning of a much larger universe. The video game will lay the groundwork by telling us the origin story of the demon starting in the American Dustbowl era of the 1930s when people were easily taken advantage of and desperate. Prime season for a demon with lots to offer people in exchange for certain things. But why tell it with a video game and not a film? A game like this will take about 2-3 hours to play through, basically the length of a feature film. At this point in time, it’s too expensive to tell in that format but I can make a video game right now and tell the story I want today.”

The pair are once again turning to Kickstarter to raise funds for their latest project and are aiming to raise $48,000 by May 29th, offering backers of the film a variety of interesting rewards. So if this project sounds like something you’ll enjoy, head over to Kickstarter and show your support with some cold, hard cash.