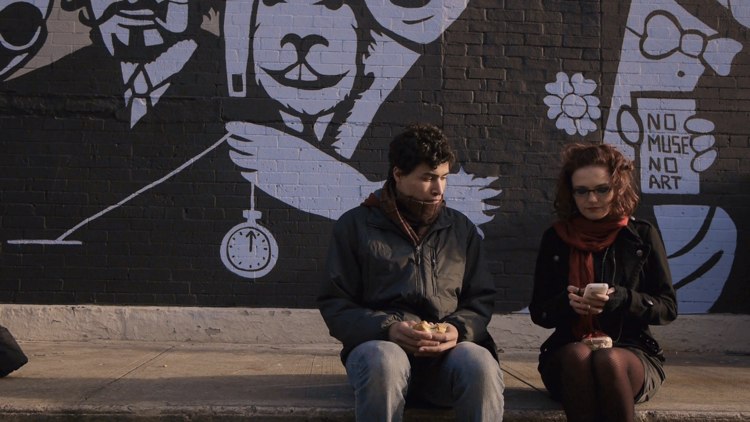 Launching the “One year. Seven pieces of Cinema” project to be released by director Ben Garchar through his NebCinematics Vimeo Channel, The Ascent tells the story of a man with no direction attempting to build himself up to completeness.

“The original idea came from my own fascination with One World Trade Center and all that history behind it. I would find myself drawn to it whenever I walked passed/saw it rising into the sky. I also have a document where I deposit snippets of ideas, and one of those was “a man staring at 9/11 footage to feel emotion”. The thought of merging these two concepts was very interesting to me. Trying to somehow mirror a man’s emotional destruction and rebuilding with the destruction and rebuilding of the World Trade Center towers.”

After writing a treatment for the film Garchar teamed up with actor and writer Graci Carli – a friend he met on the acting programme during film school at Ohio’s Wright State University – who he’d wanted to collaborate with since they both moved to New York. The script and revisions bounced between the two of them until it was ready to move into production. Leading man Alex Goodman also came from the Wright State acting programme and had previously worked with Garchar on his graduating thesis project Somewhere Never Traveled. In fact, although New York based, the production became very much of an Ohio alumni affair:

“Most everyone in a key position on the film went to school with me in Ohio. Joanna Rudolph, who produced the film, is pretty much the only person I met in New York…but I did meet her through a friend I went to school with in Ohio. Cole Pisano, the director of photography, and Jeremy Dempe, assistant camera, actually came in from Ohio to Brooklyn to shoot, and so did Alex. So we were all staying together in my little studio apartment (which also doubled as the set with some production design by Rachel Lowery) for the five shoot days.

We shot on a hacked Panasonic GH2 with an adapter for Nikon lenses. They were nice and sharp and fast, which was good because we were using a lot of available light, especially at night. Cole was really incredible. Not only does he understand exposure better than anyone I know, he also had very simple lights. He brought a few china balls and practicals and he and Jeremy created what they called the ‘party plank’, sticking some LED lights on a foam board to help out with some of the night stuff.”

Squeezing post into the hours between the commitments of life and his job as a freelance editor, Garchar spent a year in Avid Media Composer off and on taking The Ascent through post, with Steve Pequignot handling color correction and Steve Giammaria stepping up for the final sound mix – bringing the film in for its just over $3000 Indiegogo raised budget.

You’ll be able to watch all seven films in the series on the NebCinematics Vimeo Channel as they land.