For many filmmakers, taking a break from client work more often than not means diving headlong into an all consuming personal project. Such projects invariably force them to stretch beyond the bounds of their comfort zones to create films which surpass their previous repertoire. In experimental art and fashion film The Rapid Eye, directing duo FLORIS+MENNO (Floris Vos & Menno Fokm) embraced their need to experiment with fragmented narrative, practical effects and aesthetics, to create a stunning film which evokes emotions on a subconscious level. We asked Menno to take us through the journey.

The making of The Rapid Eye, is the result of a long period of searching and developing. We were looking for a new direction to work in and bring more depth to our portfolio. Both, Floris and I started our careers in graphic and motion design. Through the years we’ve done some enjoyable projects that involved a lot of contemporary image language and cutting edge animation, aspects we really feel passionate about. Although the jobs were pleasant, we learned there was a missing link in our passion. The urge to tell stories and create an emotional cinematic experience combined with our love for music, got bigger with every project we worked on. Our interest grew away from the computer and we were more than ready to step out of our ‘comfort zone’. We wanted to learn a whole new craft of filmmaking. To fulfil our new goals, we had to make specific actions of our dreams and start a new strategy; directing artist videos and developing more independent films. The first steps were not easy for us, we learned to work (and deal) with human beings; regardless of if it was a crew member or an actor. There’s still a lot to learn but it’s all been worth it! We’re accepting all the experiences gratefully and we’re finally realising our cinematic ideas.

Often in the beginning of a project, we start separately in our own environments with our own music and a suitable ambiance. When the mood is right, the creativity will flow. After a while, we come out of our cocoons and begin sharing our ideas and combining them into one solid concept. For ‘The Rapid Eye’, we began differently. We wanted to start without a clear concept or storyline. Again, taking a leap and getting out of that comfort zone of accuracy and over thought scripts. Experimenting with the bunch of scenes we came up with was the main goal in those first weeks. It ended up in some really fun and inspiring weeks and we learned how to work in an intuitive way. We experimented with paint, rags in our basement and stayed in the woods one weekend to shoot some beautiful and mystical footage. Hikers looked very surprised seeing us running around in black coats with masked faces during the day.

After some weeks of experimenting, we were a little bit lost. What were we doing and what was the purpose of the film? By editing the footage, we came to realise we had some really interesting material but we needed to add more narrative; a storyline that would stitch the scenes together. The process from a strange therapy of an unknown woman became the source for the disturbing and versatile scenes. This woman is dealing with something dreadful from her past, a mysterious occurrence that happened in hotel room 732 – yes, we added some Kubrickism to our film, referring to room 237 of The Shining. The thoughts and images of consciousness of the woman, will she slowly reveal herself to the viewer and what happened in that hotel room. But what truly happened will be kept in the middle and will only be translated through the choreography and symbolism. It felt we had to add this storyline otherwise it would have only been stylish imagery. We found it really important to keep a balance between being abstract and literal. By adding a small storyline, we tried not to overrule the fragments with the story and we kept our goal by creating a visual puzzle for the viewer. 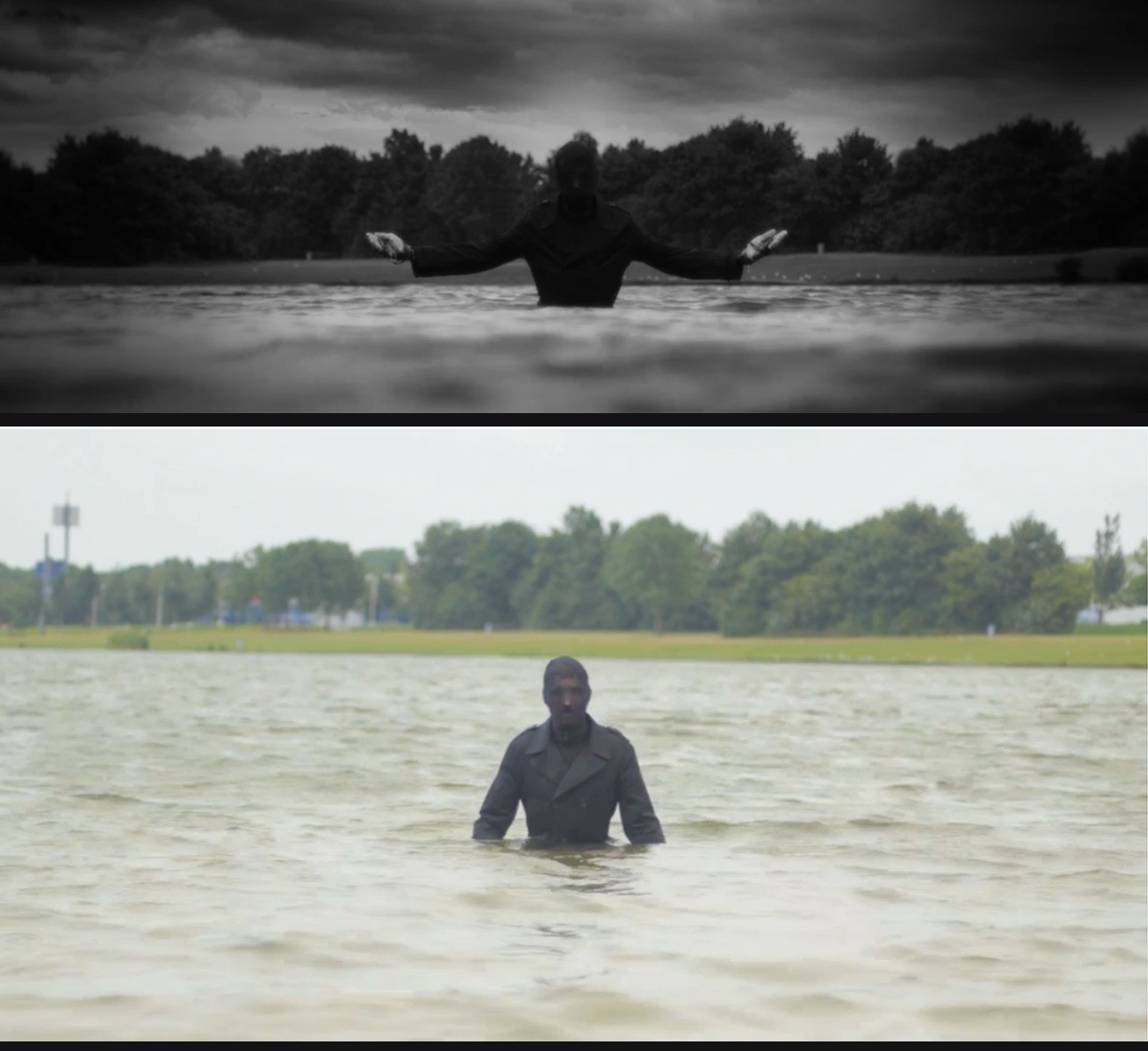 Choosing black and white grading for the film, was one of easiest decisions we made. In a previous project we did for FITC Amsterdam 2012, we were really inspired by film noir lighting. We found that by creating such a monotone ethos, images become more iconic and timeless. Also, I have to admit that in post-production it makes it so much easier to merge the scenes all together.

It’s no surprise that we were inspired by filmmakers like: David Lynch, Stanley Kubrick, Jonathan Glazer, JJ Abrams, Darren Aronofsky and themes such as: nomadism, rituals, dreams, darker side of humanity and strange tribal phenomena.

The footage of the dancer in the church was all shot in one day. We had a small production team, which helped us out pro bono! Most of the other footage was recorded just by the two of us. Some scenes were made possible with the help of some lovely volunteers (our poor friends) who were willing to hold lights, wearing tights on their heads or kneel down in the mud. All for the art, right?

We started recording during the summer and gathered around 120 minutes of usable material over a period of 4 months. In between our commercial projects, we effectively worked around 6 or 8 weeks to shoot and edit our film. All the footage was shot on our own Lumix GH3 (m4/3 sensor), an affordable prosumer camera with a combination of the right lenses, offering a sweet cinematic look and feel. During the church shoot we hired some additional gear, our lens package consisted of a 17 & 25 mm Voigtlander both with 0.95 aperture and a 12mm/1.6 Nokton wide-angle. An amazing dry-ice smoke machine created the smoke in the film and our gaffer had some other tricks up his sleeve for some cool, different lighting solutions.

The power of FLORIS+MENNO’s rich, impressionistic visuals would have been severely undercut were they not partnered with an equally inventive soundtrack, which is why the duo turned to creative music and sound design company Box of Toys to craft the music and sound design elements for The Rapid Eye. Box of Toys share how they approached the film’s auditory challenges.

It was clear from the start of the audio post production process that the film existed in a predominantly surreal and dreamlike world. The protagonist awakens in a disorientated, narcotic state and embarks upon a journey of realisation. As such we wanted a main element of the music to reflect the unworldly environment without inferring an overly deistic interpretation of the film. Luckily for us, we were able to source Swedish Yoik singer, Juhán Niila Stålka, who happened to live in the vicinity of our Stockholm studio. Yoik singing is a traditional form of music heralding from the indigenous Saami community of Northern Scandinavia. The style we recorded with Juhan exhibits prolonged, meditative tones that appear to compliment the subconscious viewpoint of the movie and it was interesting to witness how he effortlessly combined two culturally different music styles in the studio.

In order to incorporate a little pace and dynamic to the music, we introduced more contemporary elements as the film progresses. In particular we used a repetitive yet evolving synth bass line, courtesy of the Moog Taurus, that drives the piece in key moments, filtering in and out for effect. A blend of traditional and cinematic percussion bridges the gap between the old and the new, adding impact where appropriate and a sense of urgency as the woman struggles with her predicament.

The majority of the sound design centres around the use of tortured metallic sound effects. This choice was made in order to accentuate the distressing and overcast tone of the film, as well as a generally organic approach to the soundtrack. Our metal sounds were created by recording with contact microphones; microphones that capture sound via physical contact with vibrating objects (much like a stethoscope). The beauty of these microphones is that you never know what something will sound like until you try it, presenting a whole hidden world of sound. As well as recordings of service elevators, cages, fans, and metal doors, we took a field trip to the now permanently moored HMS Belfast in London, a WWII Royal Navy light cruiser that features as part of the Imperial War Museum. We were able to capture sounds of hatch doors, footsteps, wind and creaking that reverberate through the hull of the ship and provide the perfect soundscape for the opening of the film.

So now that all the hard work, generosity of friends and experimentation has coalesced into a compelling, multi-layered film which is equal parts style and substance, where do FLORIS+MENNO plan to take things in the future?

I think that we created a good creative vision with The Rapid Eye, which expresses what our directing duo FLORIS+MENNO stands for. But this is just the beginning! Hopefully we can push our production skills to much higher levels, paying more attention to story-lines and blending in CGI. The Rapid Eye is the head of an all new portfolio that will be created and filled with similar films.

For now our workflow can be divided into two departments; low budget but challenging and autonomous projects, and routine work which includes design and animation that makes it financially possible to do the more personal projects as described above. For the future we hope to have the possibility to blend those sections together more for bigger and commercial purpose.