Recently heralded as one of Screen International’s Stars of Tomorrow, young UK director Rob Savage is certainly making a name for himself in the world of independent filmmaking. With his debut feature Strings (which he helmed at the tender age of 18) picking up The Raindance Award at the British Independent Film Awards in 2012 and his music video for South African band Dear Reader winning Best Music Short at the 2014 London Short Film Festival, the director’s growing list of awards and accolades make it perfectly clear that Savage is not just a filmmaker to watch for the future, but one who is making great strides in the present. Hot on the heels of his aforementioned music video, the director has released another powerful promo online, this time presenting an engrossing tale of teenage love and mythical beasts in his visual accompaniment to British Sea Power track ‘A Light Above Descending’.

A young boy takes his girlfriend into the forest to share his ultimate secret with her.

Joining us on DN to talk about his latest production, Savage reveals all about the inspiration of local legends, shooting in black and white and working with dead fish:

The concept for the video is quite unusual – feeling like a coming-of-age tale with a mythical beast thrown in for good measure, how would you describe the synopsis and where did the idea for the promo come from?

The idea really came from my own childhood. When I was growing up, my friends and I would invent local legends on the spot, telling stories of the spirits that inhabited the local library or the rabid creature that lived in the shed at the end of my garden. We would each pretend that we had seen things that backed up the others’ stories to the point where I can’t even place where my own memories end and the stories begin. I wanted the video to feel like those memories, with the traditional coming of age tropes and the fantastical elements being approached with the same matter-of-factness. As anyone who has ever been a teenage boy will know, going in for your first kiss can be as scary as any creature living in the shadows.

The album from which the song is taken has a loose sci-fi concept running through it, and so me and my co-writer Kate Herron concocted the idea of presenting a very relatable set up and slowly drip-feeding the audience signs that something more sinister was brewing beneath the surface.

You do a great job of building that sinister undercurrent throughout your video, so when the climax hits we realise that it was subtly present all along – how much attention did you put on finding the balance between the two contrasting tones?

This was something that we spoke about at length while prepping the video, as we wanted the fantastical strand of the story to feel intrinsic to the coming of age strand. I think the key was keeping everything through the eyes of the characters. We wanted them to be deeply felt and for their emotions to really shape the video, so that while we are feeding the audience hints at something unsettling, we were always experiencing it through the story of their relationship. For instance, the boy only decides to share his secret (the creature in the tree) with the girl after he has grown closer to her and knows that he can trust her, so the final reveal actually becomes a poignant finale to their burgeoning relationship rather than an incongruous scare to pull the rug from under the audience.

How much of an influence was the British Sea Power track on the production?

I’ve probably listened to this song upwards of a thousand times and yet I still don’t know what it’s actually about, and haven’t taken the time to even read the lyrics. My previous music video, Dear Reader – Took Them Away, was a very literal interpretation of the song, so I was very wary of speaking too much to the band about the meaning behind the lyrics, even on a thematic level. I made the song the soundtrack to my life for a few days and certain sentences began to jump out, such as “for you I am returning”, which sparked off the idea of featuring a young couple as the leads and approaching the video as a fondly held memory, using different rates of slow motion to give the impression of a memory being held on to and frozen in time.

The success of the piece relies heavily on the performances of your young cast members and the on-screen relationship they portray. How did you go about casting your leads and what do you feel they add to the video?

Sammy and Izzy, who play the two leads, are the heart and soul of the video and were a complete joy to work with. We spent a long time casting and knew that the would have to get it spot on for the film to work. I had auditioned Sammy previously for my feature, and wanted him immediately for the role, having been blown away by him in Wild Bill, as well as his wonderfully intuitive improv in the audition, something I always respond to. Izzy, who I had seen and been hugely impressed by in Never Let Me Go and a host of short films, was recommended to me by Luke Snellin, the filmmaker behind shorts Mixtape and Disco (which Izzy stars in). They met for the first time on the day and, as we shot mostly chronologically, their initial shyness with each other blossomed into a wonderful chemistry that mirrored that of the characters.

The fish is also very convincing, how did you get him to play dead for so long?

That poor fish. He was puppeteered, waggled around and accidentally left unrefrigerated overnight. He should receive some sort of posthumous award for the humiliating things he was put through. A special mention should also go to Sammy Williams, who spent most of the shoot having to hold the rapidly decaying fish, whose belly exploded onto the actor’s neck and chest during a scene. Fun fact: the fish you see Sammy hold in the wide shot by the lake is a different fish, which dropped into the lake when the line broke.

Visually, it’s a hugely impressive production – the cinematography is really striking – why did you choose to shoot in black and white?

This is the second video I have shot with DoP David Mackie, whose work has been consistently stunning. The decision to shoot in black and white came from a few places – I had been teaching a filmmaking course at the BFI, focusing on Gothic Horror, and had been tutoring the students in Chiaroscuro, forcing them to shoot short projects in black and white to draw their attention to light and shade and how they could use it to tell their stories. David and I spoke about this and decided that black and white would also be useful on a practical level, allowing us to utilise the dim November light and draw the focus away from the flat greens and browns of the dark forest and place emphasis on the light, shadow and textures of the environment.

Can you tell us about the shoot? What did you shoot on? How long did you shoot for? How many people in the crew? Any difficulties?

The shoot was tough – we had a very ambitious schedule and were constantly having to adapt to the fluctuating weather, as well as battling to finish before we lost the light at 4pm each day. We shot over a weekend with a ten person crew, who were all fantastic and calm throughout. I always tend to storyboard very carefully, but ended up being very adaptive, planning the edit as I shot and simplifying sequences to keep the focus on the performances and not the coverage. Riccardo Servini, my longtime editor, always tends to visit the set whenever I shoot, which is when we begin making our editing choices. We shot the majority of the video on the Red Epic, which is a camera that I love for its ability to shoot at 300 frames per second at 2K, a setting we used for our super-slow-motion fishing sequence. Some additional cutaways were shot on the Arri Alexa. 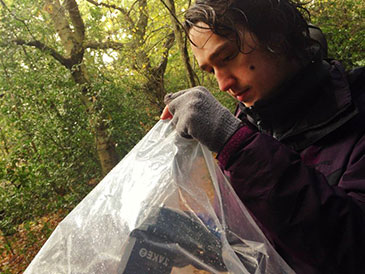 You reveal a tiny glimpse of your mythical beast at the end of the video, how did you go about creating it and were you ever tempted to reveal more?

In the original treatment the creature featured slightly more – the children cautiously approached it and placed their hands on its heaving side as it ate. However, working on a budget of £500, we knew that despite an incredibly talented team working for free, we had to be more creative with how we approached the beast. We used a carefully lit practical effect with Carl Guyenette, our fantastic VFX Supervisor, enhancing certain features so that the threat felt tangible and tactile. The creature is actually played by my girlfriend (and the video’s Co-Writer) Kate Herron, who spent the best part of three hours on her hands and knees wearing the prosthetic. Our excellent sound designer, Tom Whetmore, is a Jurassic Park obsessive and was determined to layer in more sounds for the creature’s roar than Spielberg used for his T-Rex. One of the main sounds used is actually Riccardo Servini, the editor, with a bucket placed over his head, just in case the video hasn’t been spoiled enough for you.

I’m currently working on a short thriller, which is being shot in May, and a number of feature films – one of which should be shooting early next year and feels like a companion piece to this video in many ways. My BIFA winning debut feature Strings, which I wrote/directed/shot/edited/co-produced is being released later this year by Vertigo Films, so keep an eye out for that as well!