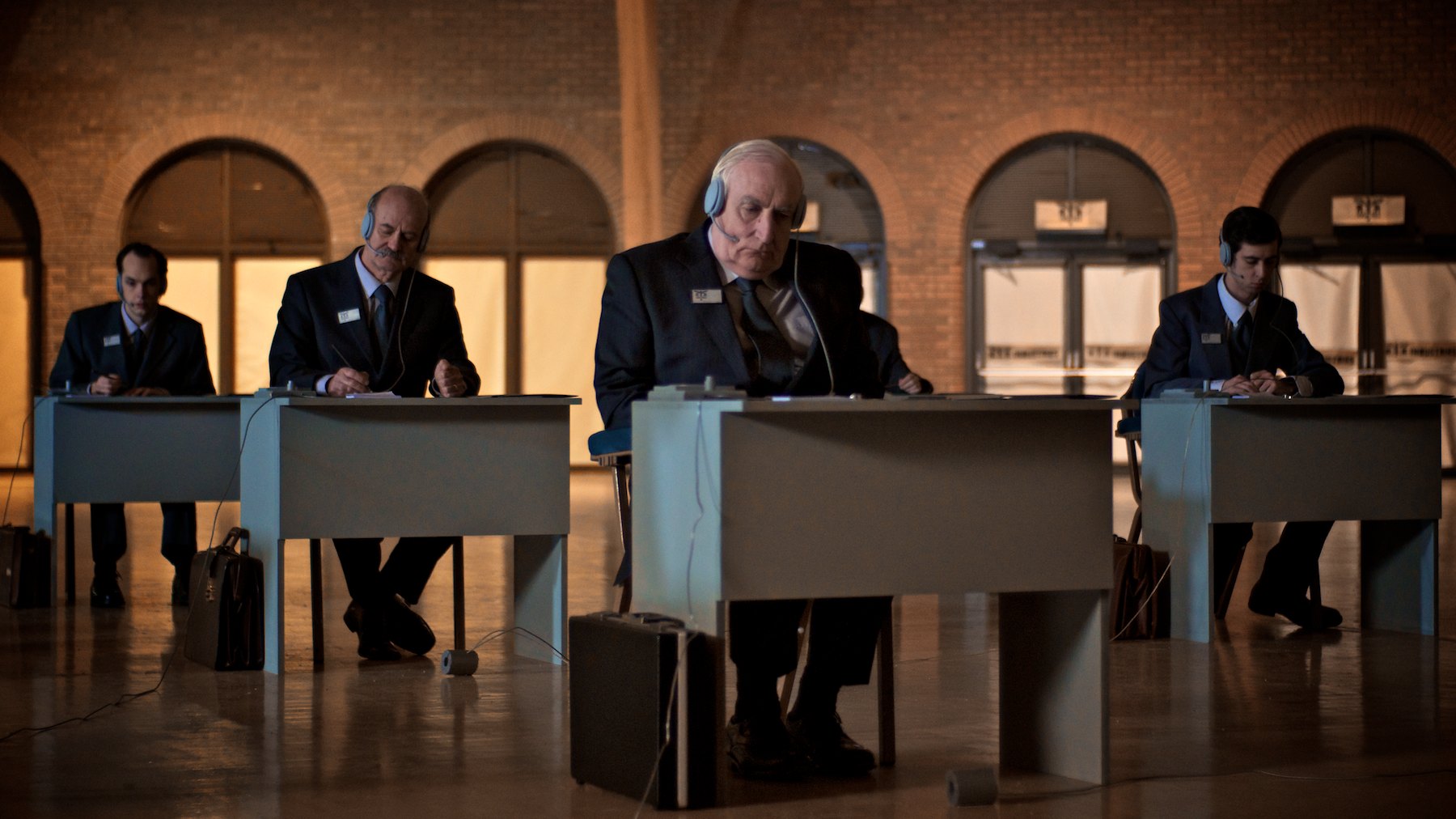 If the aim of a graduation film is to impress your audience with stunning production design and a unique plot, then Arts University Bournemouth alumni Max Lincoln has certainly succeeded with his short Thyme. Set in a dystopian 50s world inspired by the Coen Brothers cult classic The Hudsucker Proxy this is the tale of dedicated employee Shaun and how a magical pot of thyme makes him reconsider how to spend his precious time. DN spoke with Lincoln, to find out why he chose to shoot on 16mm and how he managed to achieve such an impressive visual style on a student budget.

The script for Thyme was written by your production designer Aimée Bick, what was it that attracted you to her story about a magical pot of thyme?

It’s an extremely visual and imaginative story was what first drew me in. I have always loved magical realism as a genre as I’m always thinking about how life would be more interesting if you could manipulate a few factors. I also knew we could achieve something special with it even on a student budget. 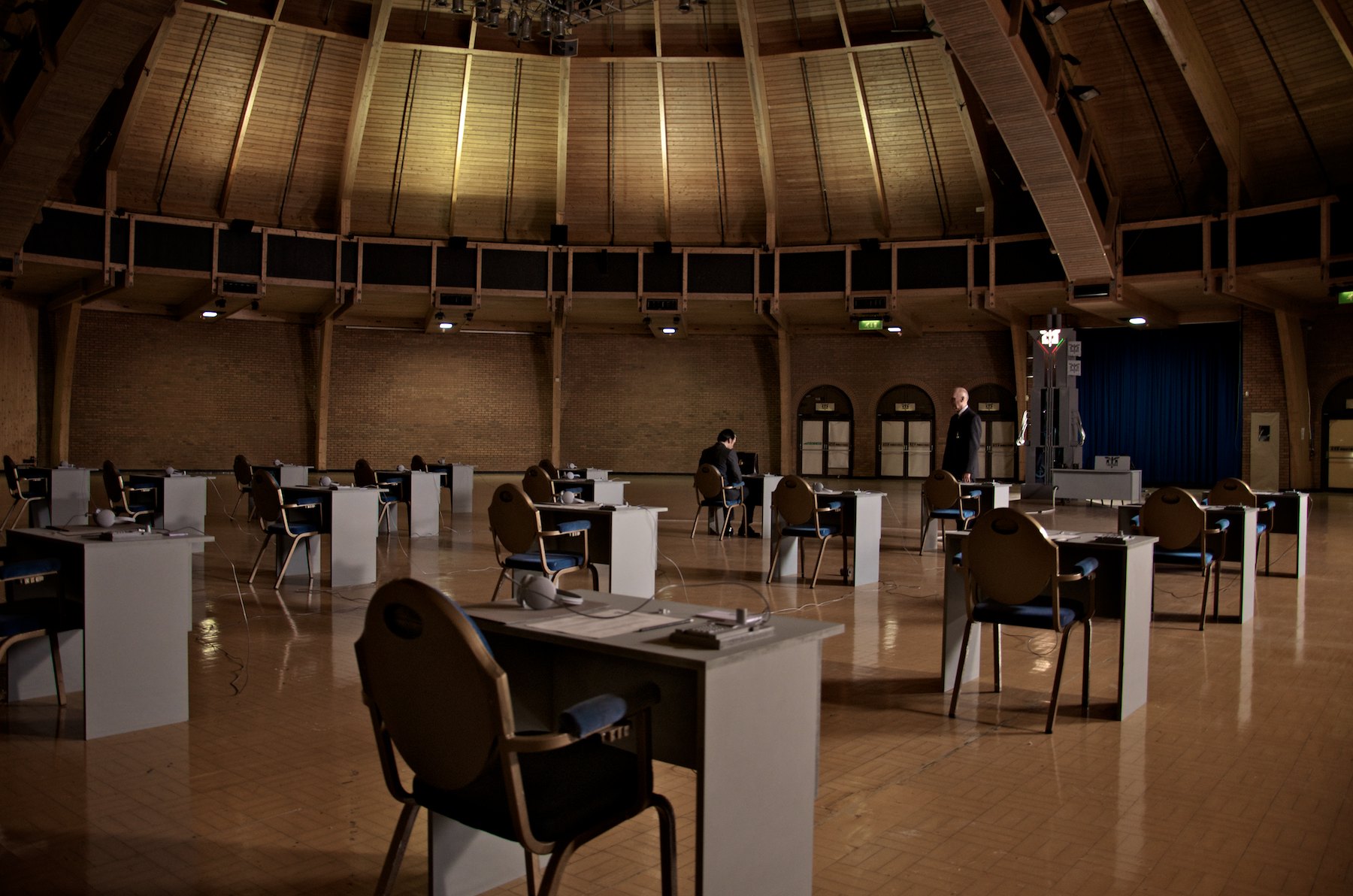 What changes did you make when translating the script to screen? Was it always intended to be set in the dystopian world we see in the final film?

The main changes were mostly cutting out the dialogue and removing the many thyme/time puns. The only one left, which happened to be my favourite, was “what a waste of time/thyme!” Initially on reading the script I saw the world of the Coen’s Hudsucker Proxy but set in the UK. Taking this idea, the other HODs and myself developed it into a dystopian 50s world. However by the time we began the edit, much of this was removed including underground tunnels and a steam train as it slowed down the pacing.

Thyme is your graduation film from the Arts University in Bournemouth, how did you go about raising funds for the film?

The university gave us the majority of the equipment, film stock and a grand but we ended up raising the majority through crew donations and an Indiegogo page. We also put on a Rocky Horror screening and sold costumes and random items from our homes. 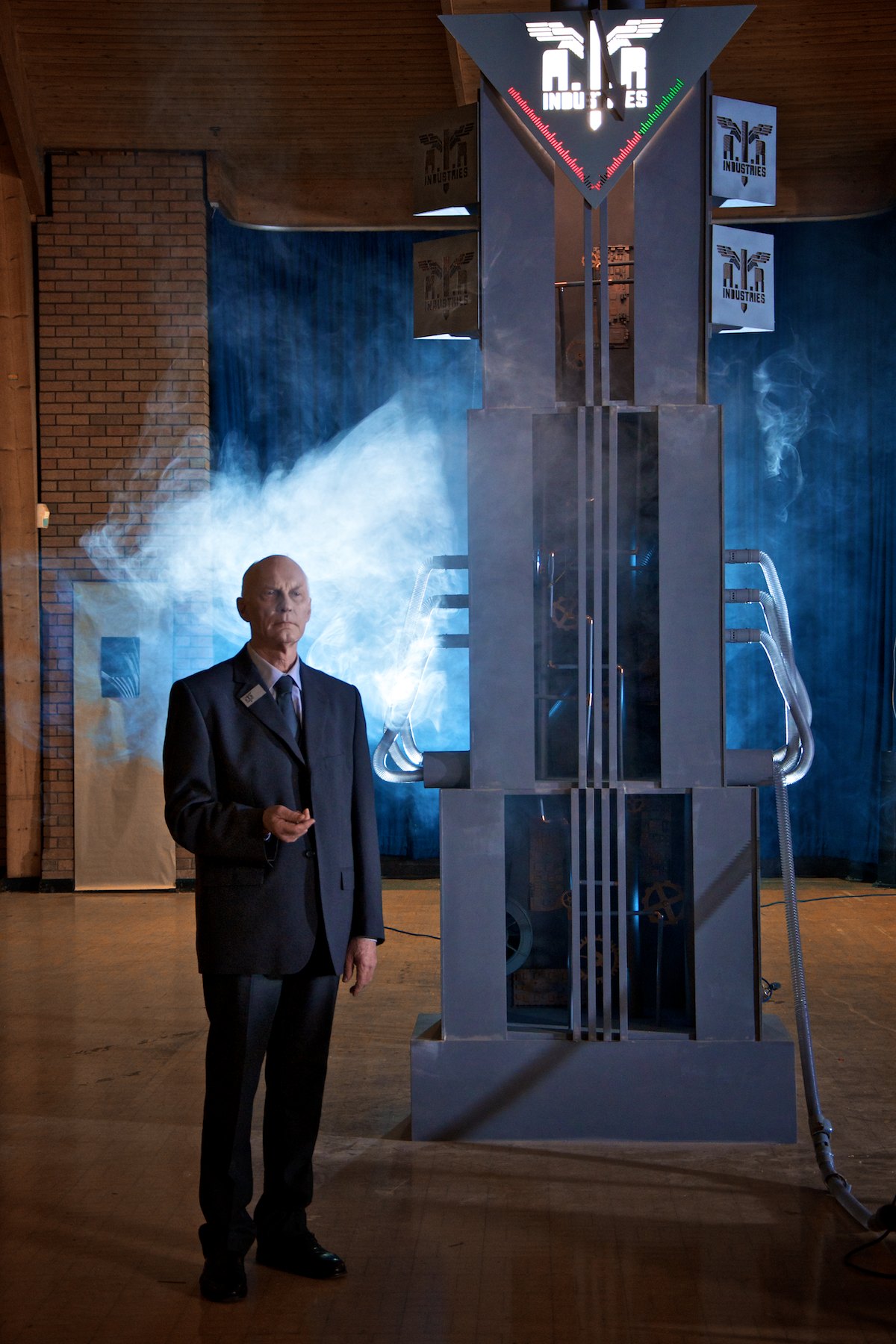 Visually the production design is really above and beyond what you would expect to find in a “student” film. How did you go about recreating the vintage feel through locations and costume?

Our team carried out extensive research into the period and Aimée our Designer had been raiding every car boot sale in the Dorset region. Locations had been quite hard to come by as we struggled to rent an office in the region. One night, delirious from location scouting, we came across the Bournemouth International Centre. Amazingly we were able to use their gigantic circular space. We also had a great deal of luck in finding a beautiful 50s kitchen in a spectacular home in Sandbanks. The owners kindly let us film there as well as allowing the cast and myself to rehearse and stay over throughout the shoot.

You shot on 16mm – was this a technical decision due to the aesthetic you were aiming for and if so what do you think the film format brings to your film?

This was primarily a stylistic decision, as we wanted to add to the vintage look and feel of the film while keeping in with the 50s aesthetic. Also with shooting on film being harder with every new year for smaller productions, it was a brilliant opportunity to experience directing on 16mm with a large crew. This is something I’m pretty sure I will not be able to repeat for some time.

Were you concerned at any point that you didn’t have the resources available to make the film exactly as you wanted?

My background is working in the art department and so I had a good idea of what could be achieved for the budgets that we were working to. We also had an extremely talented and resourceful crew so I didn’t doubt for a moment that it wouldn’t look how we planned. Also often on tighter budgets you become more creative and this certainly happened on our film.

With Thyme now released online, what are you working on next?

I’ve been playing with a couple ideas but new films keep inspiring me and so the development process has been slow. I hope to have a new solid script by the end of the summer. I also work full time in the art department so this has been taking up the majority of my precious thyme.