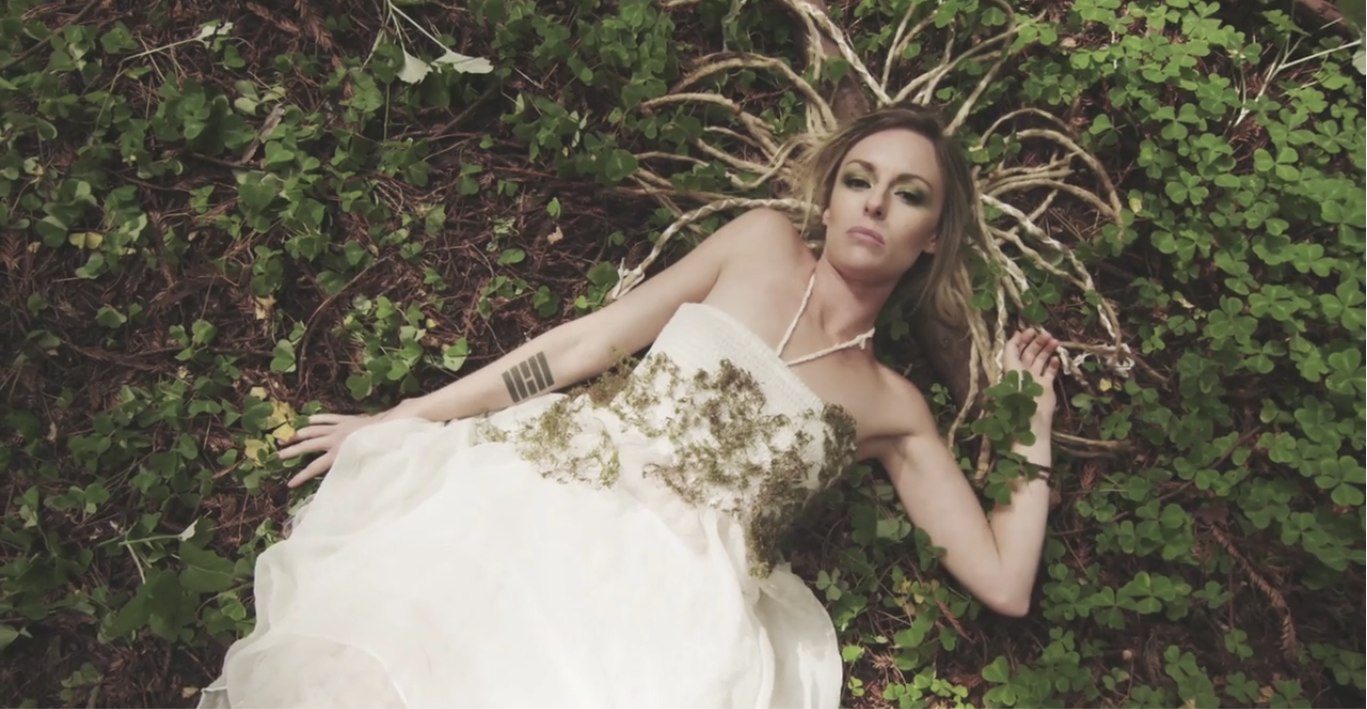 When we last sat down with director Jason Roberts he demonstrated his adeptness for penning a killer tagline and, more importantly, that he had the chops to deliver on all of its intriguing promise in his robbery gone grievously wrong short Leader of the Pack. Jason returns to the pages of DN after far too long an absence (shame on us!) to share a detailed insight into his collaboration with Amber Tisue on her music project Solace and Fury for track Be Brave. But before we hand things over to Jason, let us take a transformative walk through the forest with Tisue.

I met Amber Tisue of Solace and Fury while working in San Francisco. We became friends and I loved her music; her voice is out of this world. We had spoken about doing a video together, but it was never really the right time. Some years later we both found ourselves living in LA and reconnecting over Sushi. She came to me with an acoustic version of Be Brave; what was to be a secret track on her latest album The Fire. I fell in love with the song and started forming ideas for it right away.

The concept was pretty amorphous. The idea always involved Amber and her connection to the forest, but things were constantly changing based on available resources and budgetary restrictions. In many ways, a lot of my music video concepts tend to be that way. I’ve learned, when working on a shoestring, you need to roll with the punches and adapt to current circumstances. Amber and I talked at length about nature, divinity, sacred geometry and design, and a lot of other spiritual and philosophical concepts to try and inject into the video. So the foundation of geometry in relation to nature was always there. I also wanted the forest to transform her in a way. A transcendental evolution. A lot of my bigger ideas were scrapped along the way. I did some tests shoots, even stop animation tests, but I wasn’t able to translate some of the ideas in my head to the screen, so I tried some different angles and some more simple, but elegant ideas. I got Megan Reisig to help out with costume design. She absolutely went above and beyond. I would argue that the costumes steal the show. She was so dedicated and thorough. Those feathers you see on the second costume? She set them all individually in the head piece. Amazing. I gave her some initial ideas about the contrast between the two costumes. The first was to bind the spirit (the flowing white cloth) and the earth (the moss), while the latter costume was more primal/carnal. Then, I just let her go with it. I really trusted her, and she really surprised me. 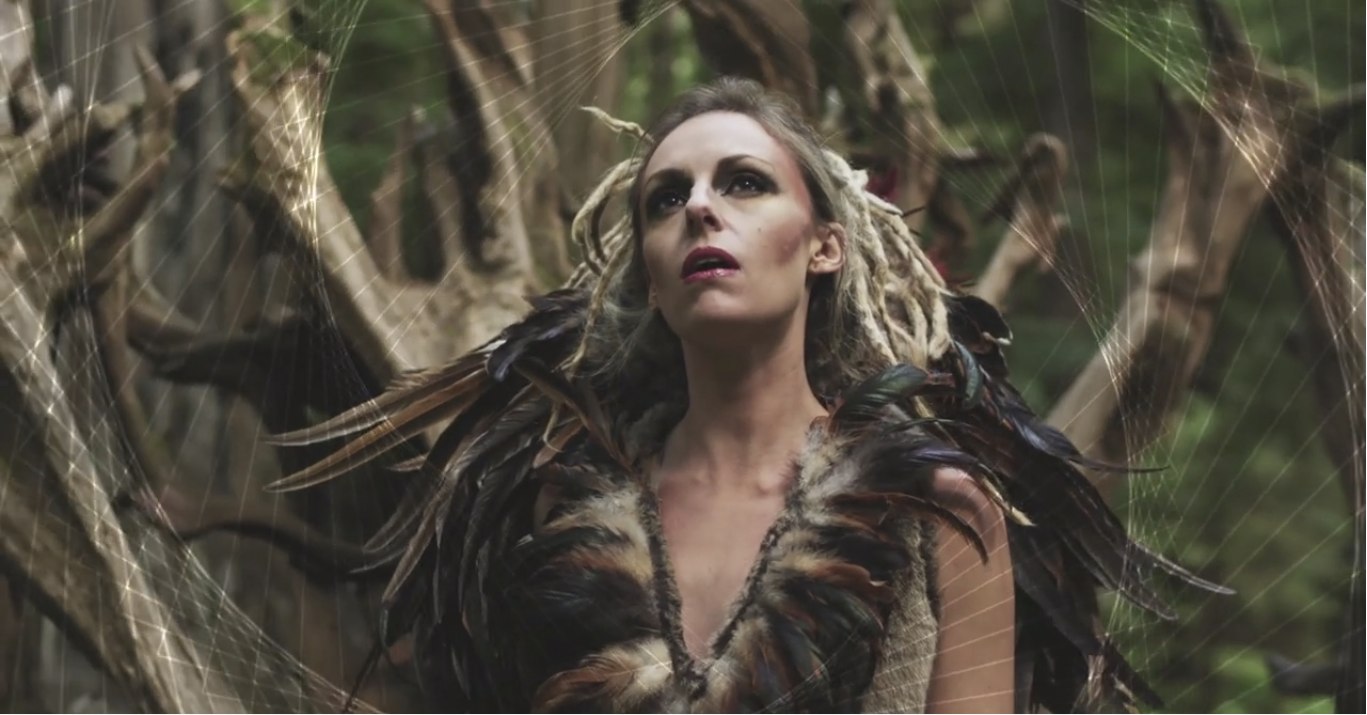 Things were beginning to coalesce, but we were still out a location. Location permits in LA are not only strictly enforced, but expensive. Enough to throw a forest in the area off the table. I did a lot of driving, trying to find the right look… something secluded enough, to no avail. It was only when I was meeting with my dear friend, and director of photography for the video Patrick Lawler, who suggested we go up to Montgomery Park in Northern California. You have to see this guy’s work. He’s just so so talented, and is one of the most generous, positive dudes I’ve ever met. I trust this man with my life. Pat showed me a video shot of the forest; a test shoot for his Red. That was the place. And my favorite part? We didn’t need a permit, all we needed was money for gas! Before you knew it, we were back in the bay area. Patrick hired our friend Stew Cantrell, a beast of a stedi-cam operator, and Troy Dickerson, a madman with a mustache, to AC for him. I can’t thank those guys enough for their time. They are some of my favorite people in the entire world. I’m so grateful for being around these talented folks, and I try to remind myself of that every day.

I only saw the location in a few photos on the internet, and in Patrick’s video, so when we got there, I had to think on my feet the entire time. Not only that, a lot of what I wanted to do did not require a stedi-cam, but I really didn’t want to waste the opportunity, or more importantly, Stew’s time. So, I threw out my shot list and we figured it out as the day progressed. We even changed the costume order right before we started shooting. It just felt better in the moment. I’m glad we did. I still made sure there was a progression throughout the video and found locations for Amber to perform that fit portions of the song. There were a few shots we set up for VFX, but for the most part, we were improvising. I don’t necessarily recommend this method. I probably would have saved a lot more time in post had I stuck to my guns. Progress over perfection. Throughout the whole thing, it really became more about striking visuals, rather than a narrative. That path was indeed carved from circumstance…but much like the conversation Amber and I had from the beginning, there is something very beautiful in constant transformation. Patterns will emerge from the chaos. I used to illustrate a lot when I was younger, and it didn’t take me long to realize that what is in your head never translates to the page. That taught me the value of discovery in art. That maybe the constructs you build in your head are too rigid. Your perspective needs to be flexible. Not to mention, finding an amazing crew that is there to enhance your vision, or better yet, help you problem solve to drive the day forward, is the best thing that any director or artist can ask for. Putting trust into folks like that is incredibly important. If you do that, you’ll open up a whole new world of discovery. I love this crew to death. 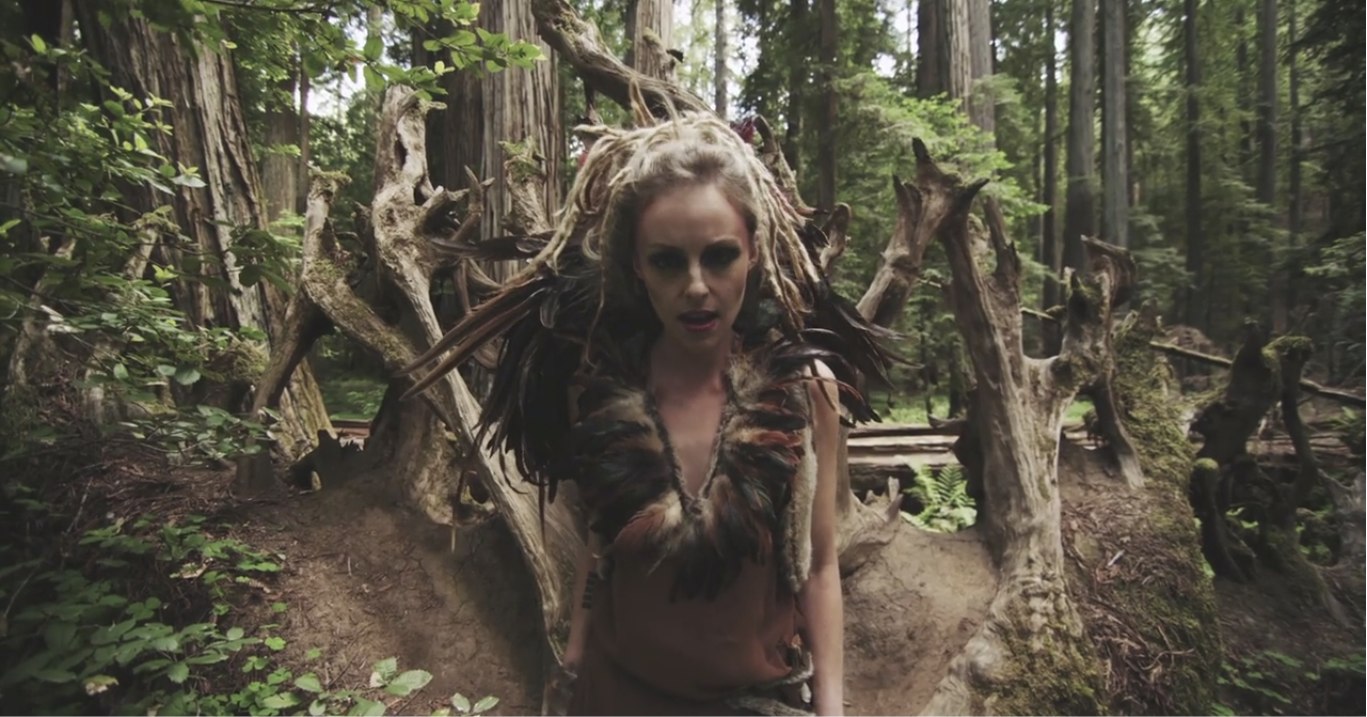 There was a lot of trial and error when it came to post production. I tend to try things I’ve never done before. I think it’s important to push myself to the absolute limit of my current ability and try and break new ground. That being said, it tends to take a bit longer. I locked an edit in the first month or so and cut in Adobe Premier Pro. I’m really fond of that program. My poor computer could barely handle the Red footage. So I guess you could say I push my technology to the absolute limit as well! I began experimenting with some things I had in mind before production, but nothing seemed to feel right. I decided I needed another direction. Knowing this, I had to beef up my After Effects abilities. I had some knowledge of the program, but for some foolish reason I didn’t take the time to really learn it until my ambitions caught up with me. I did a lot of tutorials on the fly, learning about camera tracking, working in 3D space, compositing, and a multitude of other techniques. As I started to get a handle on the program, I began to see the larger concept forming in the edit. I developed the idea of this 3D tetrahedron growing from the ground and getting larger and larger, eventually consuming the forrest as we know it… transforming it and Amber. That’s really what drove the loose narrative of the piece. Then I added some more 3D, some kaleidoscopic sweeps, some optical cross-zoom moves, and other 3D objects sprouting from the environment to keep it interesting throughout. But like the nature of trial and error, there were plenty of effects and ideas left on the cutting room floor. I would develop some things for a week only to find that it wasn’t quite what I wanted it to be, so I threw it out and started from scratch.

All in all, it took seven months of weeknights and Sundays (ALWAYS take Saturday off. I think it’s really important to have day of rest and reflection… its not worth burning yourself out, especially if: 1. there’s no deadline, 2. no pay-day, and 3. you already have a stressful full-time job). I learned so much from this project, and while there’s plenty I wish that could have been done better or differently, I wouldn’t have changed such an educational experience like this in any way. After all, progress over perfection, right?