Exploring the ‘Monkey Love Experiments’ of Ainslie Henderson & Will Anderson

Fresh from the announcement of the film’s premiere at this year’s Edinburgh International Film Festival, we speak to animators Ainslie Henderson and Will Anderson about their latest short Monkey Love Experiments. Combining stop-motion, live-action and 3D animation and telling the tale of a misguided monkey who believes he is destined for the moon, the BAFTA winning filmmakers took time out from their busy schedule to give DN an insight into the origins of their story and how they went about taking it from script to screen:

On your Tumblr, in one of your first posts you describe Monkey Love Experiments as a film about love, monkeys and man landing on the moon – can you tell us a bit more about the narrative and the origins of the story?

AH: The story was born from wondering about a point in American history, in the run up to 1969. NASA were sending monkeys into space while a psychologist named Harry Harlow was undertaking a prolonged series of experiments with primates. He called them the ‘Monkey Love Experiments’ and he was trying to prove that monkeys, and by extension, we, need love in order to develop naturally. He argued that feeling loved is as important to survival as being given food or shelter. Harlow did some terrible things in terms of animal cruelty, in fact, the animal rights movement pretty much started in response to him. However, it’s worth understanding that he did these things during a climate of belief in sanitised, clinical care, where parents were told that ‘a pat on the head’ to say good night to your child was affection enough. Highly respected child psychologists of the time were promoting glass enclosures to ‘keep your child safe from germs’. In his own perverse way Harry was a pioneer for a loving kind of parenting that wasn’t widely believed in then. I got to thinking about progress, science, reaching out into space, and the part that love has, or has been forgotten in all of that.

I shared these garbled ramblings with Will in the pub, he helped me construct them into some kind of cohesive narrative, and together we wrote a script.

How much of an influence did existing footage of ‘Harlow’s Monkeys’ play on the narrative and aesthetic of your film?

WA: After Ainslie talked me through Harlow’s experiments, I was pretty captivated by the original footage. In terms of aesthetic, which I was originally mainly looking after, the original videos were essential. I loved the sort of VHS dubbed greenish look they had with slight dull glitches throughout. They all felt very sterile, no real blacks or whites, with much more mid-tones. I tried to match this carefully with the overall balance of the film.

AH: Huge, and for anyone with any interest, I would definitely recommend looking them out. Harlow had a bizarre, unnerving showmanship in what he did. His experiments were part science and part theatre, we watched them over and over and really tried to capture some of the stilted strangeness in them. There is something fascinating, cold and cruel, but with these beautiful tiny monkeys forming attachments and learning to love right in the centre stage. We were moved by the drama of these clips and I know that Will worked really hard to replicate the visual quality of them.

We tried to train a real monkey, those little guys look cute but they can’t act for shit.

How have you split roles on the production? Were tasks divided on existing knowledge/strengths?

AH: Yes, we were really excited about that, mixing Will’s digital abilities and my stop motion, with both of us shaping the story.

WA: This is a particularly fitting question for MLE. The film was very much Ainslie’s from the beginning, but after a while we decided to team up on it to realize it more fully. This was a decision made to enhance the film, mixing both our skills. I’m much more digitally minded compared to Ainslie, so it was clear I’d be responsible for the look of the film. Ainslie had a lot of work to do getting the performance right for our main character.

What were the most challenging parts of production and did you have to learn any new skills for this film?

AH: In terms of practical challenges, getting Gandhi (our monkey) to look light, small and spritely was difficult. Sharna Rothwell did a fantastic job of making Gandhi. The only way she could give him convincing skin and fur was to coat him entirely in a skin of silicone, which meant he looked great, but was actually pretty heavy. Our poor little friend suffered a broken back during shooting and had to undergo an emergency operation.

WA: Matching the stop-frame with live-action footage was probably the most challenging thing for me. It was sort of part of our pitch for getting the film made. We were like “We need each other to make this film.” Ainslie would essentially act through a monkey, and I’d sit in the corner and stitch it together.

Another challenge was creating the 3D elements, as the film depicts the footage from NASA, from lift-off to moon landing. It was clear we couldn’t use original footage early on, so it was my job to create it from scratch. I therefore made most of the television sequences in 3D using Maya. Before this I was mainly working with 2D animation, so it was a bit of a learning curve.

AH: Maybe another challenging part was working with other people. Don’t get me wrong, we were supported in this film by a raft of brilliantly talented individuals, but up until now we’ve made films on our own, at art school, or without funding, for the first time we had people working for us, and we were working for people in a way too. It’s an entirely different skill in describing to someone, and bringing out of them what you want, than it is to do something yourself. Learning how to be guided, and influenced while honing your own vision. They say that filmmaking is a collaborative art, and this film was our first chance to really engage with that challenge.

Your film combines stop-motion, live-action and 3D animation, how did you go about deciding which format to use for each segment? Was it always an obvious choice?

AH: We tried to train a real monkey, those little guys look cute, but they can’t act for shit.

WA: The moon landing sequences I animated for the film shouldn’t feel animated, so the real reason was to recreate reality, or a sort of slightly augmented one. I don’t know how successfully I did this, but in terms of first impression I think it I get away with it. So in answer to your question, I think 3D for these sequences was the only way. I’m drawn to live-action, as I feel it carries a sort of weight that sometimes gets lost with animation. 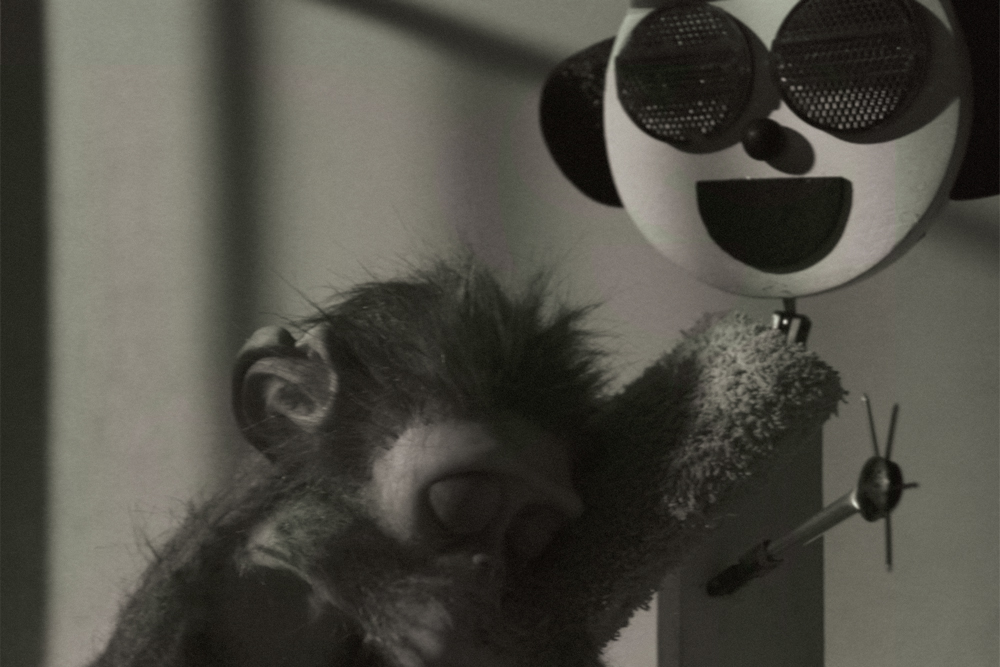 Why did you choose those techniques? Was it down to familiarity or did they feel best suited to the narrative?

AH: We have a mantra, that kind of comes from Will more than me, where we constantly ask ourselves, ‘Why is this film animated?’ ‘Why in these techniques?’ For me, I wanted to set the film in as ‘real’ an environment as possible, so using filmed footage was appealing. Using a stop motion monkey in amongst this just made sense. Harlow’s experiments were all about physicality, touch, affection, so I wanted the monkey to be physical, to really ‘be there’ in a way that makes you feel like you could reach out and touch him, stop motion is really effective in encouraging this feeling.

An audience watching a film is the last ingredient of making it exist. We love this short so dearly, it’ll be such a pleasure to share it with the world.

The film was created in a 4:3 ratio, why did you choose that framing style and what do you think it brings to the film?

WA: The films ratio was something I was thinking about early on, and is possibly the thing I’m most proud of. It shifts a few times throughout the picture. It’s a homage to film, old and new. The film is set in 1969 during the moon landings, so it links narratively to older film conventions of 4:3, but our film is fiction, and it is designed to take you somewhere, so shifting up to 16:9 at key moments felt right. Furthermore, the film’s main character is caged behind black bars. It feels claustrophobic at times, but his vision looks beyond the bars, so at these points the film opens up. It also becomes square at one point… I won’t spoil it.

What does the future hold for Monkey Love Experiments?

AH: An audience watching a film is the last ingredient of making it exist. We love this short so dearly, it’ll be such a pleasure to share it with the world. It’s just about to begin its festival run, debuting at a festival that we’re not allowed to mention yet in June, and the following month at Anima Mundi in Brazil. Coming to a festival near you soon!