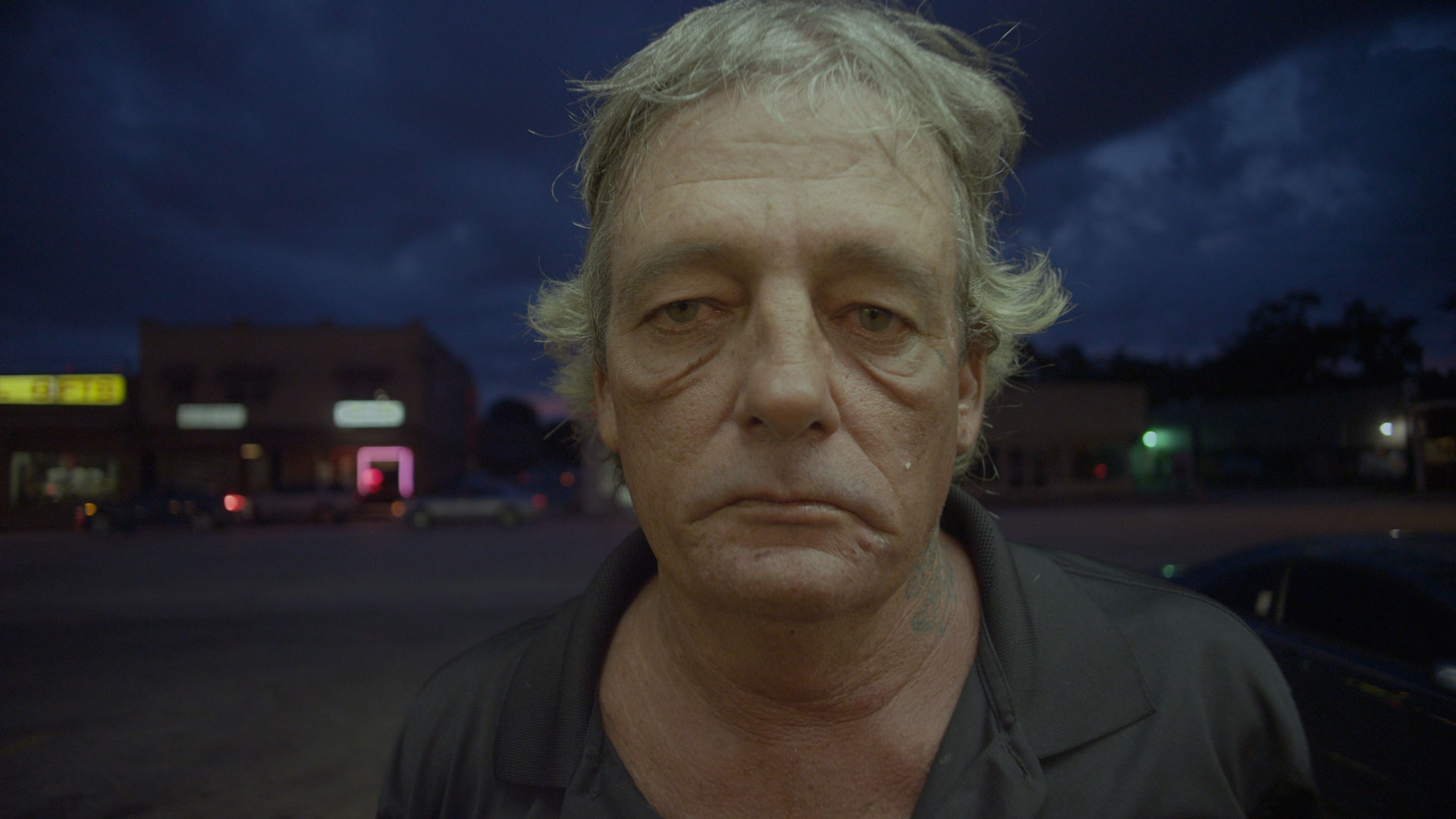 Having just finished watching Sean Dunne’s latest documentary Cam Girlz, I logged into my computer and spent the next hour or so, frantically getting down my thoughts on the film and thinking of some questions for the final part of a trilogy of interviews I’d been working on with Dunne focusing on the production and distribution of his movie exploring the world of webcam sex workers. Opening my email to send the director a quick message about concluding our interviews, I see an email from Dunne entitled ‘My new one, Florida Man‘ – surely he hasn’t made another film already has he? HE FUCKING HAS!

Making the assumption this was another Dunne short, I’m instantly surprised when I login to the password protected Vimeo link he’s sent and my eye is drawn to the duration – 49:45! Now is this a feature or a short (where do you draw the line?) – and more importantly am I really going to sit and watch something for almost an hour online, when there’s porn and videos of cats doing stupid shit to distract me? That might sounds like a dumb comment to make, I mean why wouldn’t I watch something that long online – well…watching the amount of short films that I do, I’ve become weary of shorts pushing the 20-minute mark. Most don’t manage to hold my attention for that long, so even though Dunne is a filmmaker I love, can he really break the overbearing stereotypes I have for the long-short – he does! Not only is Florida Man utterly compelling and hugely entertaining throughout, it’s probably my favourite thing Dunne has done so far (alongside Oxyana). So now I’m in a dilemma, my intentions were to speak to Dunne about Cam Girls (don’t worry that’s coming soon), but how could I miss the opportunity to speak about Florida Man first – so I dropped Dunne and line and started asking questions:

It’s about the struggle. More than any of my previous work I really wanted Florida Man to open us up and gain permission from our audience to get loose and make films that aren’t necessarily about any one thing. In the process I feel like we made a film that is kind of about everything. We purposely set out to make a film that was hard to describe, a film that you have to experience, something that transcends the current confines of this beautiful medium. If viewers feel like they were there with us, like they were laughing with Florida Man, not at him, then we’ve done our job. Well-made documentaries, in my opinion, should leave you feeling introspective, not judgemental, not above the subject, but one with them. That’s what we were trying to accomplish with Florida Man.

The film kind of feels like a wandering trip around the streets of Florida, looking for people to talk to – what was your approach to the shoot and how did you find your interviewees?

This whole thing started with a mushroom trip. Cass (Greener – Producer), Isaac (Bauman – Cinematographer) and I tripped out and during that very productive, tingly come down period we dreamt up Florida Man. We watched this amazing series of internet videos called Surveillance Camera Man and felt deeply compelled to make this film. Our approach was to book rooms in 5 different cities and show up and see what the universe would provide for us. No set agenda. We shot each day in two shifts, 5pm – 9pm, then a night shift from midnight until whenever. Basically we just drove around aimlessly, stopping any time we saw something or someone that interested us and one thing would lead to another and the universe would pull us in one direction or another. Most of what you’re seeing in the final film is the entirety of our interaction with these guys. It was quick and to the point and I didn’t even interview people besides the occasional “any words of wisdom?”. So what we got was a whole bunch of people telling stories and talking about whatever was on their mind. It was a strange and exciting journey that took us to a lot of places we didn’t expect. My longtime friend and editor Kathy Gatto was masterful in her interpretation of what this meant and how to translate this experience to the audience. One of my favorite things we’ve ever done together, she really blew me away on this one. 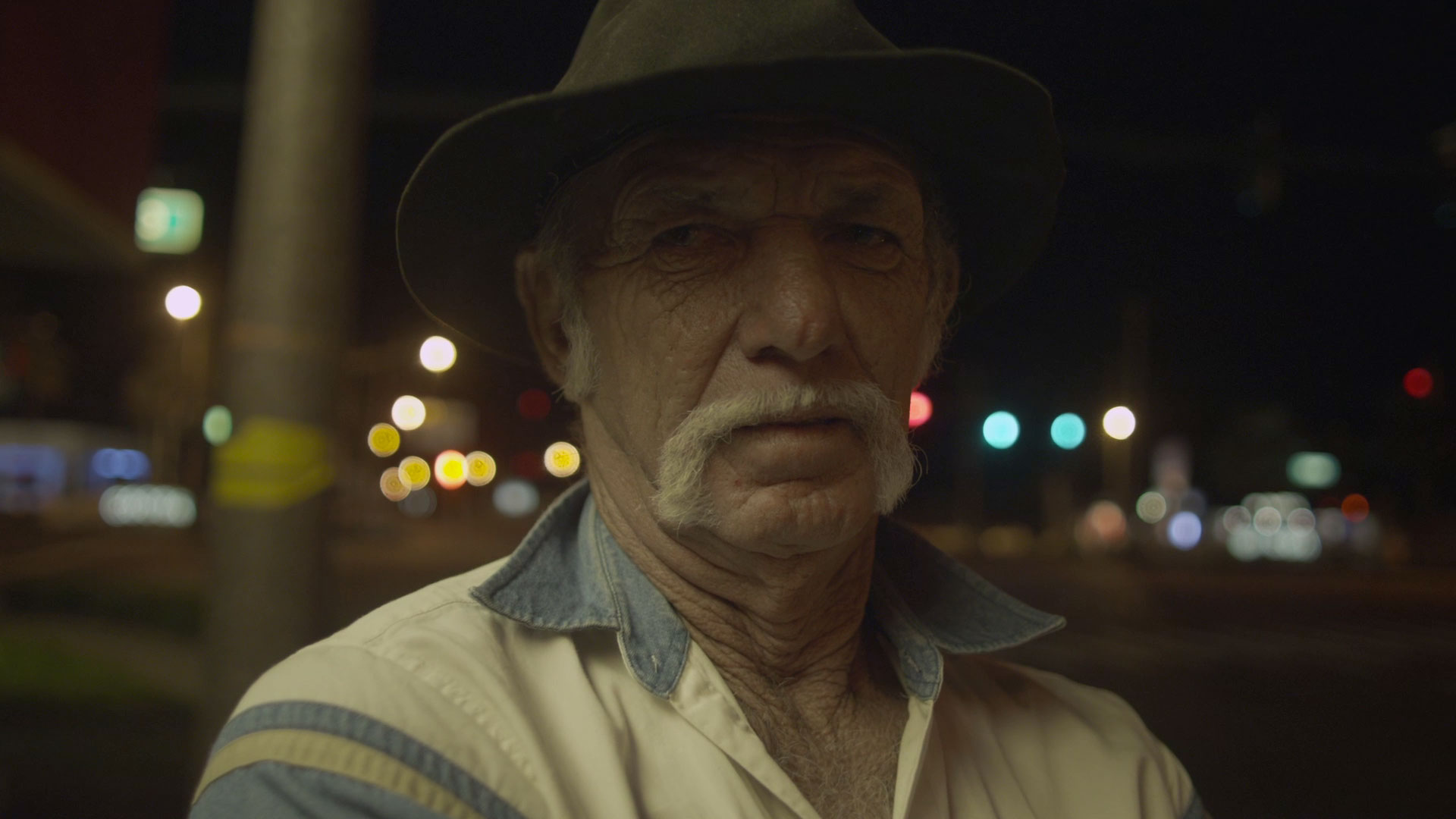 Where did the idea for the “creepy” (as described by one of Dunne’s interviewees) close-up portrait shots come from and what do you think they bring to the film?

What I hope the portraits accomplish is to give the audience a little portal into the soul of our subjects. Hanging around too long, overstaying our welcome and leaving that stuff in there was meant to be revealing of both the subject and us as filmmakers. In a way, I see Florida Man as a means of letting our audience in on the process a little. My cinematographer, Isaac Bauman and I tried to be bold and decisive when approaching the visuals. We used one 16mm lens to shoot the entire thing, so there was no hiding us or the sound guy or the boom mic or the awkwardness of having to be 3 inches from someone’s face in order to get a close up. The result, I hope, is a psychedelic blur of an experience ripe with humanity and unexpected insight that ultimately takes you on a journey of self-discovery.

We left a lot of stuff in there that would have fallen through the cracks in most traditional documentaries. Those moments, those 5 extra seconds when the subject expected you to cut the camera, they’re really revealing. It’s what I call “dark matter”, the moments that feel besides the point but to me are the point. I’ve always loved the idea of making a film about great characters hiding in plain site, celebrating the beauty in the mundane, and honoring people and moments that feel like they shouldn’t have been captured in the first place. Florida Man is the beginning of something for me as a filmmaker; time will tell what that even is.