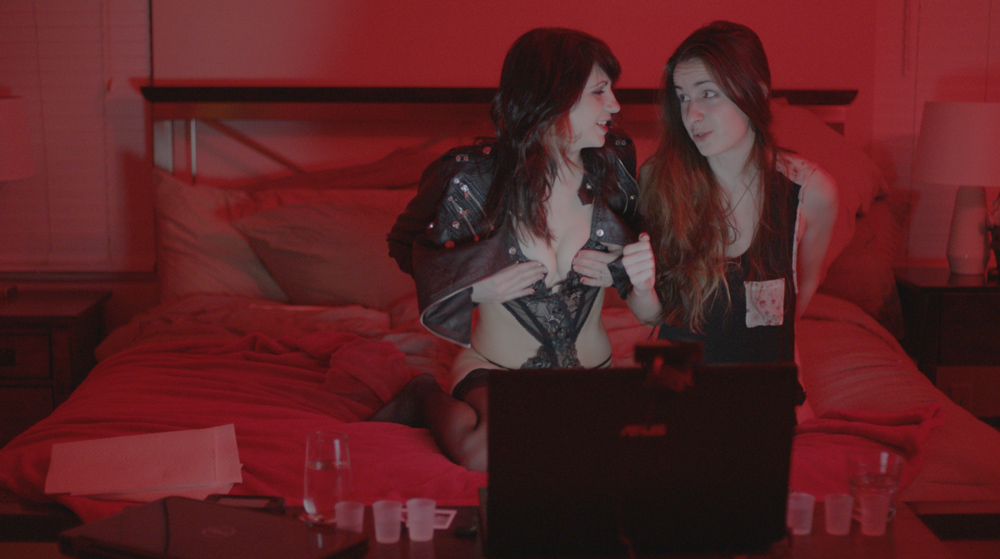 For anyone working in the world of film journalism, there will be directors you can’t wait to talk to and others you’d really rather not. Over the last couple of years Sean Dunne has firmly established himself at the top of that first pile for me. It helps that I like his work and it helps that we’ve watched him grow from a short film director discovering his style to a confident feature director determined to make his mark on the industry. However, the main reason I anticipate these talks with Dunne so much is because of the way he approaches them, there’s no guarded secrets here, no mincing of words and no pussy footing around. He seems intent on making films under his own rule and his openness and honesty to talk about the industry in which he works is like a refreshing slap to the face.

With his debut 2013 feature Oxyana only feeling like it just wrapped the other day, Dunne is once again returning to the feature film format for his next project, Cam Girlz – a documentary about women who do internet sex work via web cam. In the first of a series of interviews with the filmmaker, which will covering funding, production, distribution and much more, we speak to Dunne about his Oxyana experience, raising money for Cam Girlz and what people can expect from his latest project:

Cam Girlz is set to be your second feature length film, how has the reaction been to your first Oxyana?

The reaction to Oxyana has been incredible. We premiered last year at Tribeca Film Festival and won a special jury mention for best doc and I won for best new documentary director. It really blew us away. We put the film out ourselves and it really seems to have captivated people and sparked a necessary dialogue about addiction and poverty.

Oxyana – A transition from Short Film to Feature with Sean Dunne

Enjoy the process, every part of it, live the fucken process

We became aware of your work on DN through your short film career, how does the feature world differ and did you learn anything making Oxyana that you’ll carry over into this latest production?

The feature world differs because there is an added element of expectation. With my short films I feel like their success was based solely in the filmmaking and I’m comfortable being judged on that. With a feature people seem to get hung up on what the fucken budget was or what festivals it’s in or what awards it has or how it’s distributed, even how much money it makes. Like any of those factors make a goddamn difference. The filmmaking is almost secondary. That’s a pretty lame trend. I won’t get caught up in it.

What I learned from Oxyana that I’ve made sure to carry over to Cam Girlz is to truly enjoy the process, every part of it, live the fucken process. It was really tempting during the making of Oxyana to almost wish the time away…to just get through it due to the nature of what we were making. I realize now that the beauty of making documentaries is in the process, digging deep and feeling the truth you want to portray.

As with Oxyana, you managed to raise a pretty decent amount of money on Kickstarter for Cam Girlz, how important has the crowd-funding site been in your feature film career so far?

Kickstarter has proved an invaluable tool for us. It’s not just about raising money it’s about finding your audience. You can be sure that the good people who take the time to watch and back your project are also going to be your biggest proponents when you’re putting the film out. That’s grassroots. I’m all about it.

What crowdfunding has done for me as a filmmaker is allowed for greater autonomy creatively. We had offers to fund Cam Girlz in a more traditional way but ultimately we decided to pass in order to maintain control. We’re not answering to anyone but ourselves which make the films more pure and potent in my opinion.

You’ve even had two backers pledge $10k+ to be executive producers on the film, how surprised are you that people are donating such large amounts of money?

Yeah that was really cool. They’re both part of the team now. They both wanted to learn and be a part of the process from the start and it’s morphing into this rad, fucked up DIY film school. By the time this film is out they’ll have an education from the inside. I’m so psyched they found us.

It’s as raw and real as anything I’ve put my name on. Stylistically, I’m evolving and trying some new things that I feel will elevate the film and the subject matter.

As a filmmaker, do you feel any added pressure to meet the expectations of your backers when using Kickstarter?

No, not really. I’m just gonna do my thing. I assume that’s what they want anyway.

Where did the idea to make Cam Girlz come from?

I had been yearning to make a film about women that challenge the establishment. During the making of Oxyana I remember being curious about the lives of the women who you see in those pop ups while you’re watching porn. Real women broadcasting from their bedrooms. Who were they? What were they like? How did they end up doing this? I did some research and stumbled into this fascinating online community of women who did this sort of “internet sex work” from the comfort and safety of their homes. I saw them refer to themselves as cam girls and that sounded like the title of a film I would want to see…so I decided to make it.

From there it has snowballed and transformed into something bigger and more nuanced than I could have ever initially imagined. I think people are going to dig it.

What can fans of your earlier work expect from Cam Girlz? A similar style or something totally different?

It’s as raw and real as anything I’ve put my name on. Stylistically, I’m evolving and trying some new things that I feel will elevate the film and the subject matter. Expect a pleasure trip that challenges and enlightens.

What does the immediate future hold for the production and when can we expect to see the final film?

We’re still filming and will wrap on June 12th. From there we’ll spend the summer editing and fucking with music. That should be fun. We’re on pace to have this thing done by the fall and out by January.