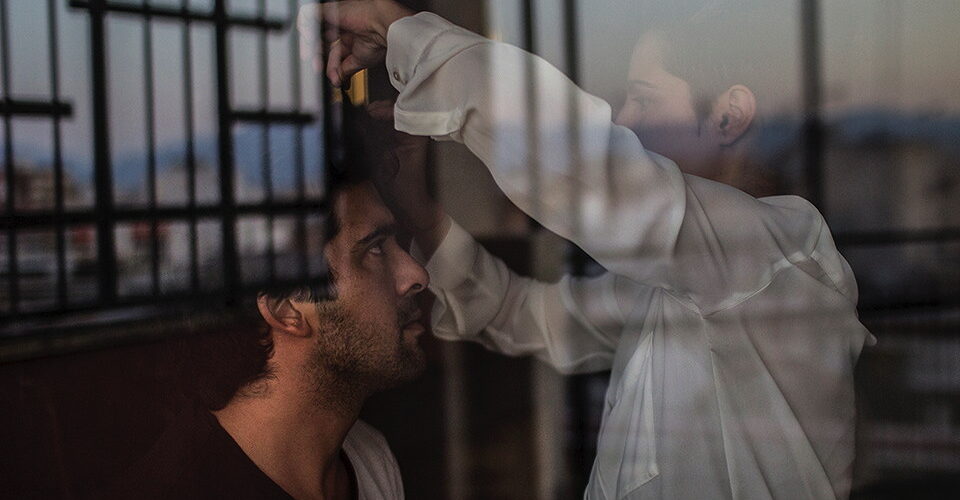 The beat of time marches on whilst the world literally turns upside down and inside out in Director Joan Guasch’s perception shifting music video Apocalipsi, created for the lead track taken from electroverse duet Jansky’s forthcoming digitalized nature album ÉÈ. Guasch tells DN how he stayed on top of his topsy-turvy promo.

I met Jansky only the day before the shooting. I had come across their music and really liked their combination of electronics and poetry, so I contacted them to suggest a video collaboration and they sent me an unreleased track that perfectly matched my first idea: to create a timeless atmosphere where the characters ended up merging with the environment, in some kind of visual apocalypse.

It has always struck me how the repetition of sound can take us to different states of mind, and in this track Jansky had used the breaking of differently-sized branches as a rhythm loop together with a synth loop for this very purpose. The sound of nature coupled with digital sounds seemed an interesting concept to me. The descontextualization of reality. How can humans gain conscience of the matter surrounding us from a different perspective, from which everything decomposes?

So, after discussing some location ideas with the band via email, I took a plane to Mallorca and the three of us clicked straightaway. We spent an intense whole weekend filming in and out, from quite early to sunset. Being the Director of Photography as well as the Director was actually a big personal challenge, but I enjoyed every shooting moment in Mallorca. The video includes references to the photography by André Kertész, Man Ray or László Moholy-Nagy, especially as far as composition is concerned. I used the Blackmagic Cinema Camera, mainly with natural light or with a LED flashlight and reflectors. The rotation of images was postproduced, using the 4K resolution of the original footage. The postproduction work took me a week to complete.