“Look at this weird thing on the ground. It looks like a crow!” – the birth of Brian Lonano’s Practical FX Led Short ‘CROW HAND!!!’ 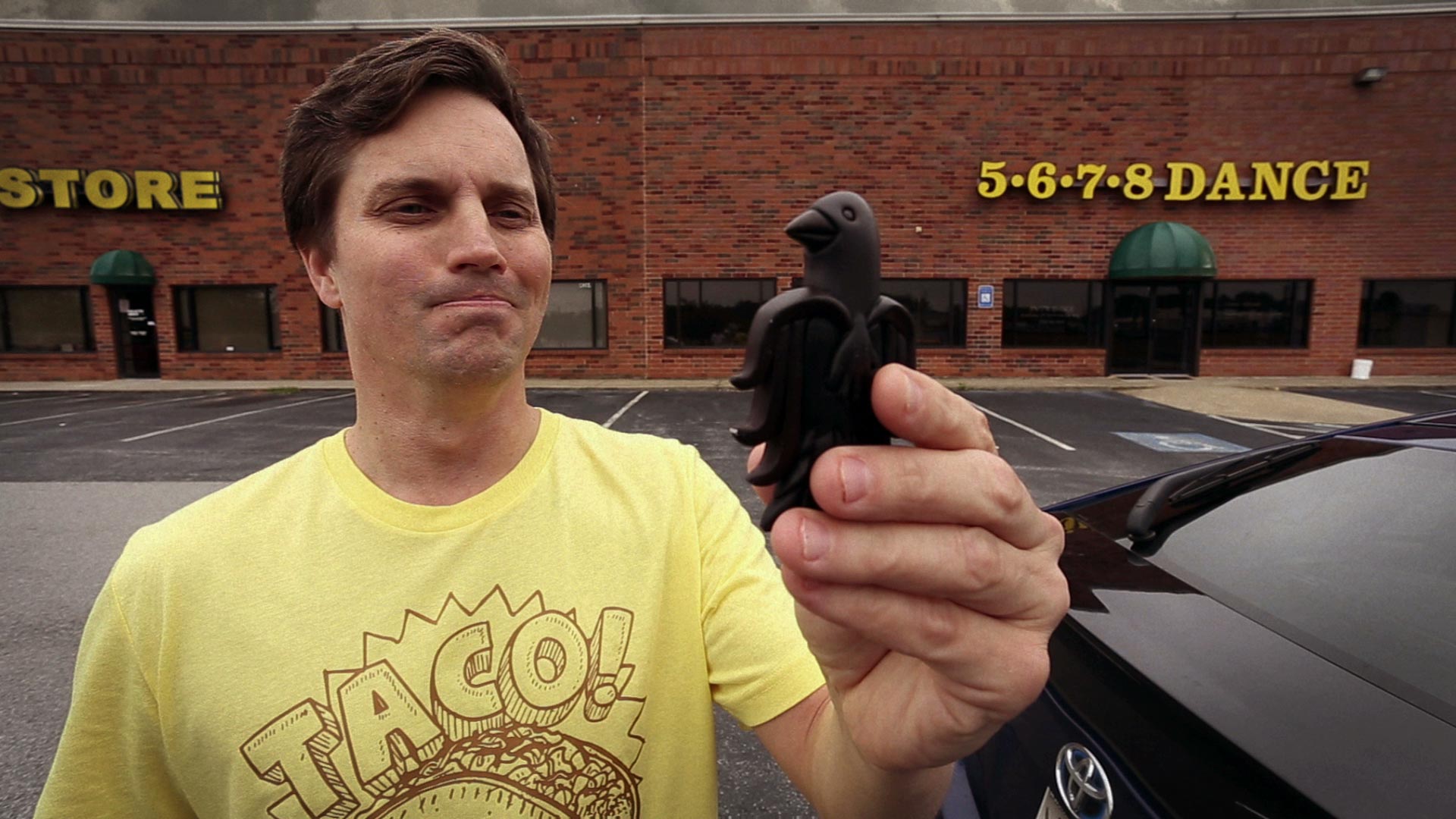 Following in the blood-soaked footsteps of gore-filled short Bad Guy #2 featured on DN last week, comes another festival-favourite practical-FX led short. Brian Lonano’s CROW HAND!!! is (as the name suggests) the gruesome tale of a unsuspecting man who grows a ferocious crow from his hand after discovering a strange object in a car park. Following a successful festival run, which has seen the film play SXSW and Fantasia, Lonano has now released CROW HAND!!! in conjunction with the launch of his crowdfunding campaign for latest short Gwilliam – which the director describes as a “terrible terrible love story between a man and a goblin”. CROW HAND!!! is a film I’ve wanted to bring to DN for sometime now, it’s two and a half minutes of pure insanity and a must-watch for those lovers of over-the-top, action-packed films – watch the film and read our interview with Lonano below:

The story of CROW HAND!!! is pretty much your every day tale of a man who finds a crow totem, cuts his hand on it, and then stands by helplessly as it transforms into a crow and kills his wife – I’m assuming it’s based on a real-life experience, but if not…where did this story come from?

CROW HAND!!! is actually based on a true story…sort of. The first portion of it is at least. In 2014, my wife Victoria Cook and me were attending the Florida Film Festival with our previous short film called Welcome To Dignity Pastures. We got our badges and were heading to the parking lot. On our way to the car, I look down and I see this small totem that looked like a crow! It was the size of a chess piece, which is what I thought it was at the time. So I call out to my wife and say “Look at this weird thing on the ground. It looks like a crow!” And she looks at it and says “Don’t pick that up. It looks really creepy.” So naturally I reply with “What could happen?” And then I joked that because I didn’t listen, my hand turned into a crow and I yelled CROW HAND!!! We laughed pretty hard at that and not soon after I said to her “This would be a fun film to make.” So after the festival, I drafted a very short script (one page) and we got to work on it.

There was no doubt that we were going to do it any other way except practically.

It’s a film that pretty much dispenses with any subtleties and goes straight for the jugular with its in your face use of blood, practical FX and heavy-metal. What is it about this filmmaking approach that appeals to you?

I figured with a name like CROW HAND!!!, we shouldn’t mince words when it comes to what the film is about. I had a lot of dumb ideas for CROW HAND!!! that fell by the wayside which was definitely for the best because I don’t think the film needs to be over explained. I really gravitate towards shorts and features that just present the world and don’t give a lot of exposition. It’s better to leave it to the imagination.

Because the film is so short, we were aiming to focus on the transformation of the guy’s hand and there was no doubt that we were going to do it any other way except practically. It takes more time to prep and there’s always the chance it can go wrong but there’s a great feeling of being able to see and experience the effects right as you are shooting. I’m not good at scaring anyone so I wanted the effects to be funny and over the top.

I equate this short spazzy film to punk and hardcore music because it’s fast, erratic and over before the audience knows what hit them. As a film goer, I find those kinds of films very appealing and I think an audience will appreciate it. I love short films but short short films are the kind I usually prefer to make. 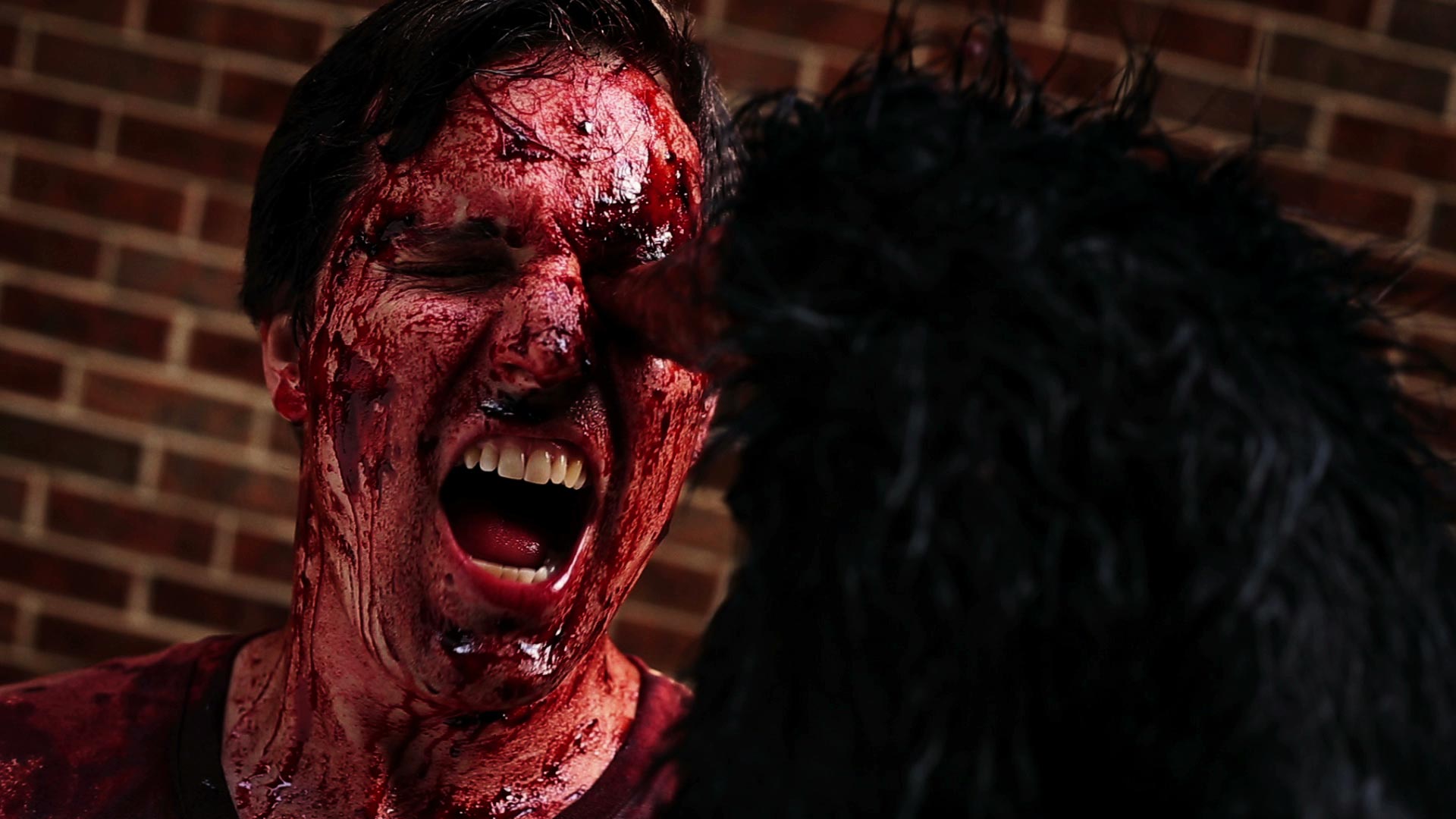 The FX are probably going to be what everyone wants to know about, the brief of transforming a man’s hand into a crow isn’t going to be a regular occurrence in most people’s jobs – what can you tell about the process of creating the FX for this film?

The FX of the film are all thanks to Blake Myers and Nick Morgan. Both are set dressers professionally for things like The Walking Dead and other films and episodic TV that shoot in Atlanta. But they have also professionally done make up and effects for films like V/H/S and Dear God No!. I talked to Blake about the kinds of things I wanted to do in the film which included a copious amount of blood shooting from a guy’s hand and a bloody, feathery stump that births a monstrous crow. Blake and Nick are great at achieving these kind of effects without spending too much money. They used fire extinguishers to shoot out all the blood, the bloody, feathery stump was a rubber glover that was modified. The crow itself was just a hand puppet that had a new beak created so it looked more menacing. For me, the coolest effect is when the crow feather slowly shoots out of the guy’s hand. That was achieved with something called dragon skin place on the person’s palm and then cutting a hole where the feather would slip out from. The entire movie cost $500 to make. There was discussion of using stop motion animation but we opted out just because it seemed unnecessary after we were looking at the dailies.

We planted 3 crow totems at each screening to see if anyone would find them and pick them up.

Your film has a healthy list of festival laurels to its name, how has the film been received when screened live?

We’ve had an incredible festival run so far. It may be the most successful short I’ve done in regards to festival screenings. Its first official screening was in Barcelona at a festival called HorrorVision where we won 2nd Prize. After that we screened at the Hollywood Underground Film Festival where we got a great write up on Fangoria’s website and then screened at SXSW! When we found out about SXSW, I wanted to attend the festival and do it right. So my wife and I ordered shirts for us to wear and posters for us to plaster all over Austin. The coolest thing we did that I believe helped us stand out at the festival was we planted 3 crow totems at each screening to see if anyone would find them and pick them up. People loved the crow totems! The Crowtems were made by our friend Rachel De Urioste, who is an incredibly talented artist/ fabricator/ designer.

The absolute greatest thing that happened was when we returned to the Florida Film Festival and played CROW HAND!!! because that’s where the film was born. We planted a few crow totems before the screening and afterwards someone came up to me and asked if I had the original totem with me. I did so I took it out and showed it to the guy and he explained that a year ago he lost his key chain. Turns out this weird crow thingy I found in a parking lot was someone’s keychain. I offered to give it back and he revealed that he found one of the crow totems I planted in the theatre. If that guy never lost his key chain, I would have never made CROW HAND!!! – That just made me so happy. 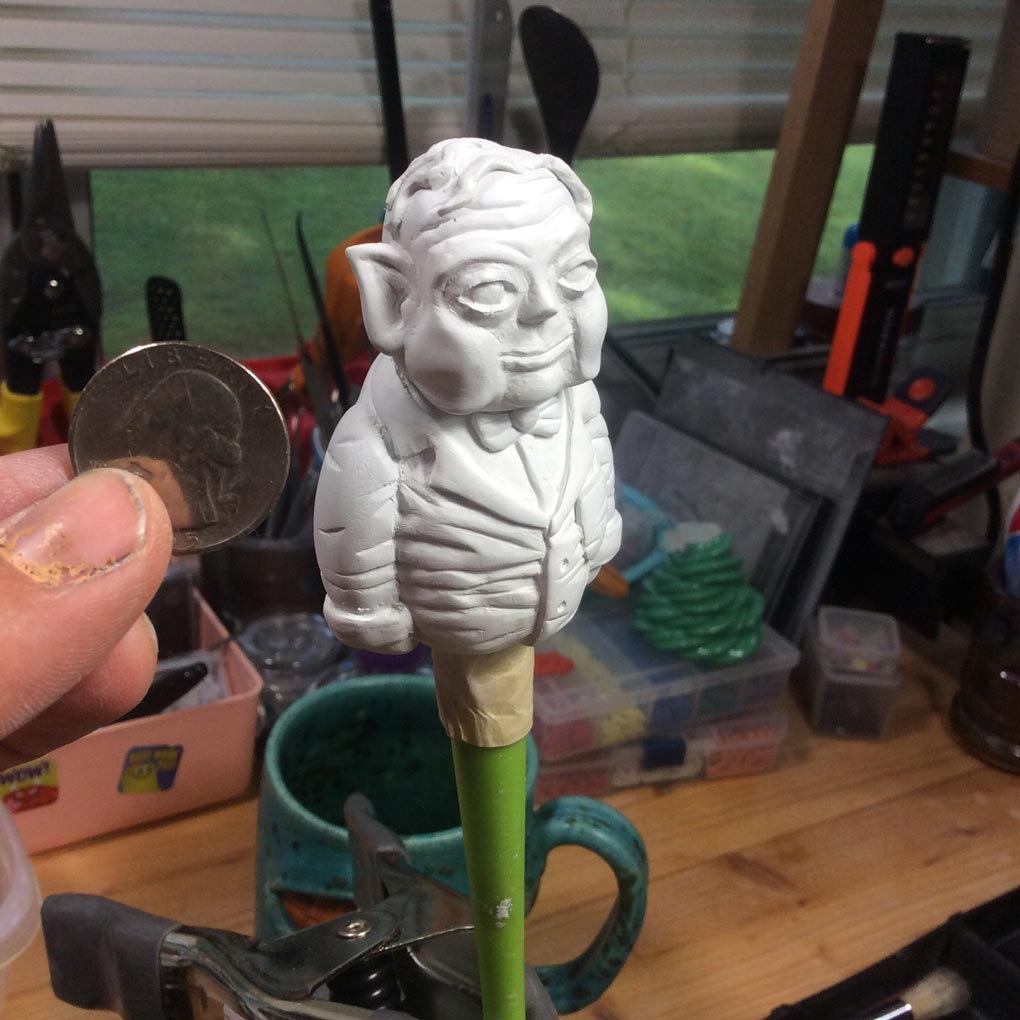 You’re currently crowdfunding for your latest short Gwilliam – what can you tell us about it and what will the funds you raise mean for production?

Gwilliam will be my 10th short film and it will star William Tokarsky (best known as the killer in Adult Swim’s Too Many Cooks) as a creepy goblin named Gwilliam. We are calling it a “terrible terrible love story between a man and a goblin”. It’s going to be another disgusting short short film. But we wanted to up our production value by shooting on a professional camera and creating a great creature puppet. The funds are going towards things like that as well as locations and catering for the cast and crew so we can make the best possible man/goblin love story there is.

The best part of the campaign I think are the prizes that we are giving out. In addition to a digital download of the film and t-shirts, donors can receive promotional art toys including the above mentioned crow totems and finger puppets of Gwilliam. I wanted to give out prizes that I thought I would want and I love weird collectible toys!