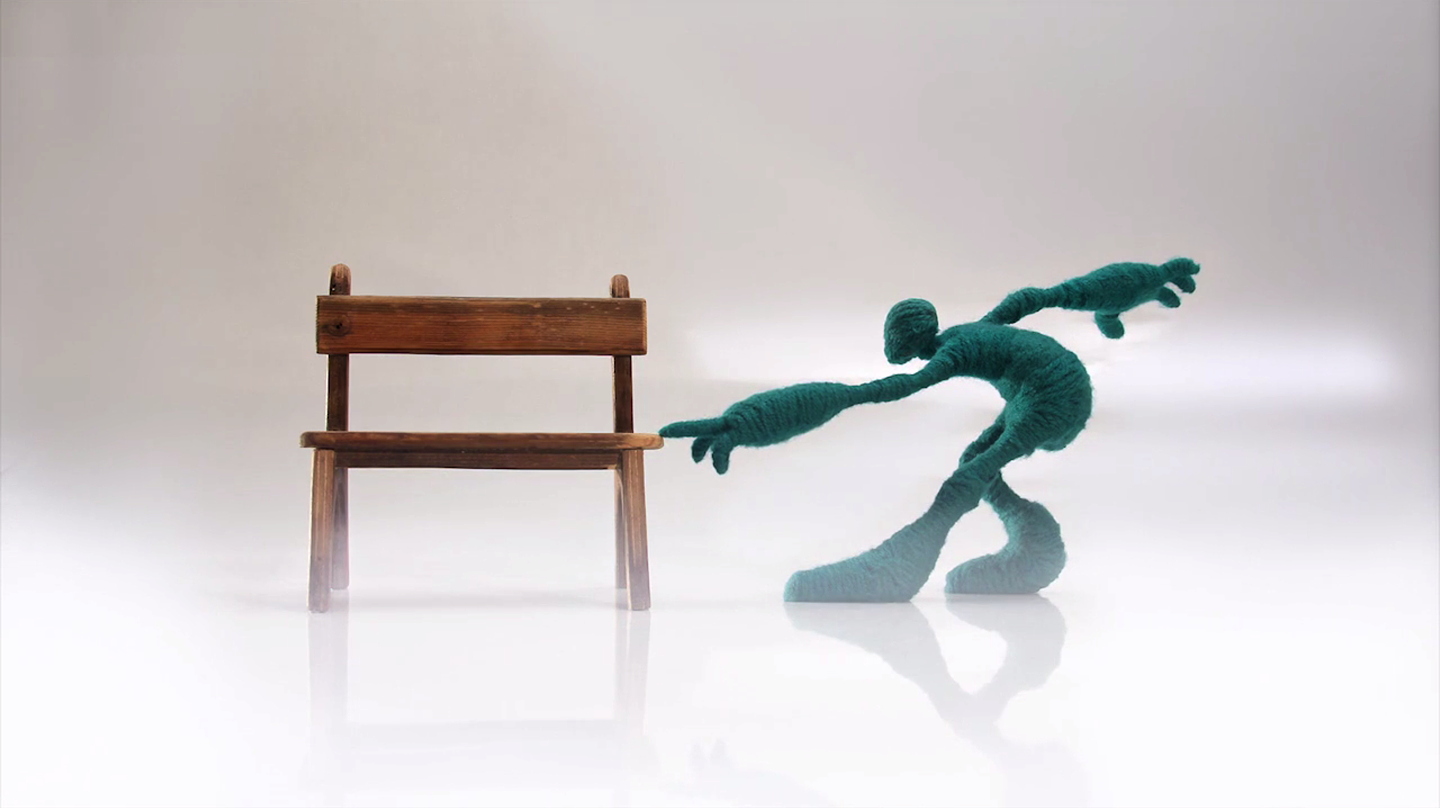 There are moments in life where we must decide to leave behind the comfort of the familiar and take a leap into the scary, seemingly chaotic void of the unknown if we are to grow and progress as individuals. Before watching Kobi Vogman’s A Way of Being, I would have never imagined that those tumultuous emotions could be so elegantly expressed through the use of wool. We find out from Vogman how he learnt to worked with, and not against, his materials in order to craft this story about the difficulty of making that next step.

A Way of Being is infused with themes of a fear of the unknown, and the literal worry of unravelling in the face of that fear. What inspired you to tell this emotive story?

The idea for the story came from life events – it was a time with lots of changes in my life. My father was really sick and was waiting for a liver transplant, I had a falling out with a really good friend of mine, moved in to a new place and so on and on. It was time for rebirth and for real change, so I started searching for simplicity in every aspect of my life, looking for the core of everything. While being outside fighting to hold my family together, I was looking inside to find my own core and strength.

Your method of animating wool is deeply expressive. What lessons did you bring from your earlier short Don’t Blame Anyone that informed the characterisation in A Way of Being?

While working on Don’t Blame Anyone, I tried to figure out wool as a material, and did some tests. It was uncontrollable! I had to come to the understanding that the less I touched it and the more I let it remain as it was, the better the animation would look. In A Way of Being I tried to understand wool as a character. It can look like chaos when it’s a mess, but on the other hand, look like a wool ball in my grandmother’s house back when I was a child. It is a nostalgic and warm material. From those thoughts, the main character was born – a newborn trying to understand the huge world that surrounds it and the chaos inside of it.

How did working with wool alter your production process?

The main aim in A Way of Being was to tell a story. Most of my work before has been abstract. I wanted to build a character using traditional puppet armor and mix it with my abstract techniques. I was very arranged with my work – had a strict schedule, filmed all the acting before, did x-sheets – so I didn’t really have any issues that surprised me.

The backgrounds are sparse, yet rich, through your use of water and lighting effects. How did you arrive at that aesthetic?

One of the statements I told myself while working on A Way of Being was ‘less is more’ – I have a bench, a puppet, let’s see what I can do with it. The thought about the space came from the Theatre of the Absurd where nothing is needed except the object that the whole story revolves around.

Both yourself and Ilia Grosz acted in the film. How does that translate to what we see on screen?

Ilia Grosz is a good friend and a professional actor, she was a part of the project since it was only a thought, helping me figure out who this character was. I never really wrote a screenplay for A Way of Being, it was me and Ilia acting this character and filming the sessions. I took that footage home and put it on the timeline, editing the story through acting. Those materials were then taken to Nick Spivak, the Sound Designer. Using the acting footage as a screenplay, I did the animatic with the puppet and its bench – working on the frames, the light changes, the tempo and all the other endless decisions I had to take as the director. When the animatic was ready, Ilia and I did another filming session of all the references of the acting. So it ended up that the puppet’s acting is half Ilia and half me.

Nick at the Studio

As well as the sound design Nick Spivak also created the score. How did you all collaborate to bring the emotional tension and ultimate resolve to the story?

Nick was part of the journey for the whole way, making the first sounds of this world I was trying to create. This is the third project we’ve made together so the chemistry between us was already there. There were sketches of the sound and music in the animatic, but the intense work started after I finished animating, when the whole thing was standing together. Back then Nick lived in a village close to Tel-Aviv, so coming to work with him in the studio was like taking a vacation from the city – listening to the nature around us and being free from the outside world. We developed a concept for the sound. I wanted it to sound like a journey, a mystical one to places in lost worlds. After trying so many types and styles of music, Nick came up with the idea of using Yagel Harush, a Kamancheh player. It was like finding Cinderella’s slipper after a long search. Fits perfectly! Nick sampled it and played the guitar at the end of the film, using a known sound to take the viewers back to the bench they’re sitting on.

A Way of Being has won several awards during its festival run, what has the audience reaction been to the film?

So far, everyone who’s seen the film has told me lots of beautiful things and supported me. For some, it was too simple, others started to cry. Each one and his own thoughts.

There is no stop motion industry in Israel so for the past year since I finished at Bezalel Academy, I’ve worked in the Israeli cinema industry as a production designer assistant, props man and a set dresser. I’m fascinated with just creating worlds. I love to jump between the art department and working on a new screenplay in my spare time, hopefully to create another independent short film.